Ines Hanl shares her greatest extravagance, her idea of perfect happiness and why she loves Pippi Longstocking. 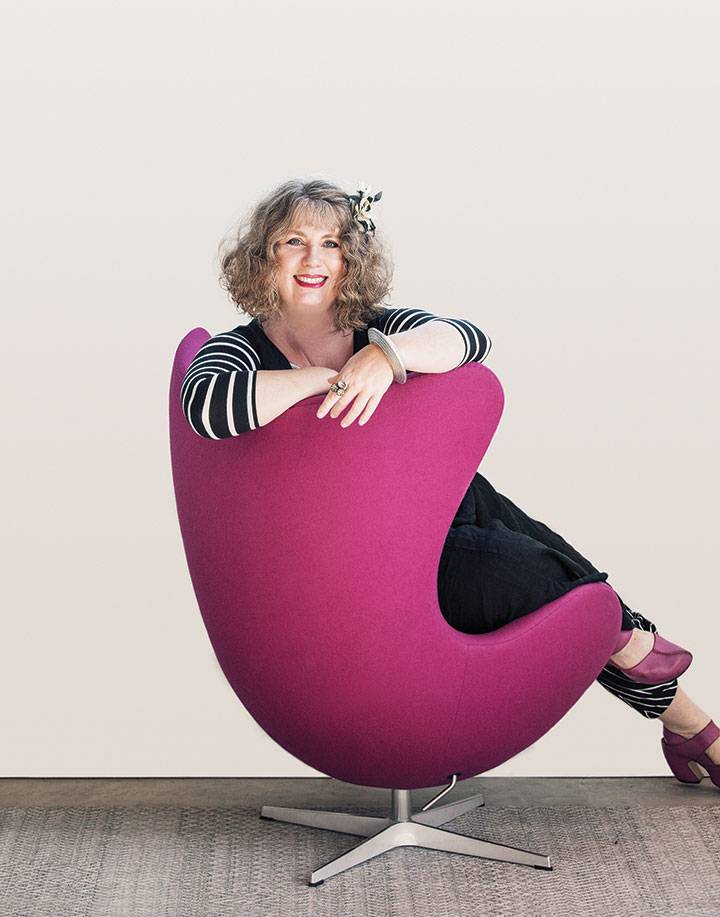 The first thing to know about Ines Hanl is that she lives in a world of creative possibility. The second thing is that she has a delightfully cheeky tendency to reframe interview questions. And why not? Her life has morphed around a desire to reshape reality, first as a child in a German household where she felt an urge to redesign the work of her mother’s decorator. “When I look back at my childhood, I don’t see colour; I see beige because that is what he did to our home.”

In pursuit of a creative life, Hanl became a theatrical seamstress-turned-costume-designer before receiving her MA in Innenarchitektur (interior architecture). After meeting her husband, the display- and theme-park designer and artist Klaus Kinast, the couple moved to Victoria and opened The Sky is the Limit Interior Design Concepts, bringing a fresh, creative outlook to the local interior-design scene.

During our interview in her Humboldt Street studio, Hanl sits beneath one of Klaus’ paintings, a portrait of the enigmatic goddess Fortuna, whose lovely countenance looks so favourably upon Hanl’s zest for pursuing a deeply creative life.

Which colour or pattern best describes your personality?
Black-and-white geometrics combined with a colourful floral.

Which living person do you most admire?
I really don’t have one person, but I do admire anyone who shows grace under adversity.

What qualities do you most admire in your friends?
Integrity, intellectual curiosity and inspiration.

What traits do you most deplore in others?
Greed and lack of common sense.

On what occasion do you lie?
I can omit, but I cannot lie.

What’s your biggest fear?
The first thing that came to mind is having a disease like ALS, but really, it’s being “caught” — not being able to move or escape. I’m thinking of it as an emotional as well as a physical condition.

Which historical figures would you most like to talk with?
Jesus, Morgan le Faye of the King Arthur legends, the Mayans and the people who built Stonehenge. All of them were involved in events at a time when society went through huge changes …

What’s your greatest extravagance?
The spontaneous answer is Fluevogs.

And the non-spontaneous answer?
To live in Victoria. That has to do with both my career and Klaus’s, because doing what we do, if we really wanted to make money we would live elsewhere — but we choose lifestyle over money.

If you were to die and come back, who or what would you be?
An animal in my household. The other answer is that I truly accept astrophysicist Carl Sagan’s premise that we are all made from stardust. If we are all “recycled” matter, it means that I have been and will be everything, so I won’t miss out.

Who’s your favourite hero of fiction?
Pippi Longstocking. I loved her independent mind, and that she kept her black-and-white horse in her very colourful house …

Is that your final answer?
Well, the first character that came to my mind was Jeannie on the TV show I Dream of Jeannie. You have to see her through the eyes of a child who grew up in a bleak 70s German household. She looked so exotic in her Moroccan-style boudoir in the bottle and her pink outfit … and she could do magic!

What’s your greatest achievement?
I’d say turning childhood trauma into positive energy. But that has a lot to do with my genetic disposition. I have a certain resilience and some people may not have that … So can I really say I’ve “achieved” that? No, but without resilience I would not be where I am.

Your idea of perfect happiness?
Firstly, good food, shelter and companionship, and secondly, to find the magic in the everyday.