Cantilevered 44 feet above a rock bluff on Quadra Island, and with a clear view of the Strait of Georgia, is a home of breathtaking beauty, already identified among a handful of buildings around the world that are “the most significant and inspirational of the year, demonstrating visionary, innovative thinking and excellence of execution.” 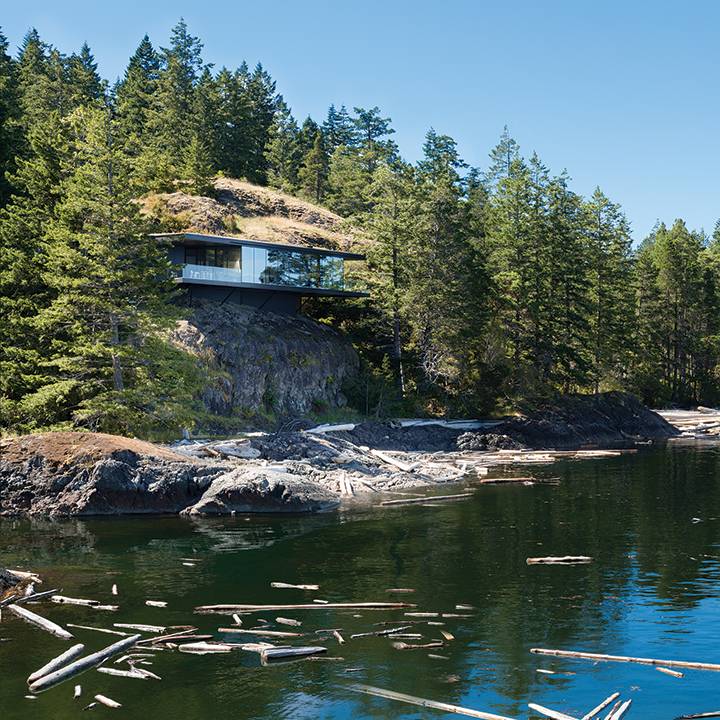 Tula House, designed by Vancouver’s Patkau Architects, is shortlisted for the prestigious Royal Institute of British Architects’ International Prize. The competition is open to architects around the globe for projects that, in addition to the criteria above, also make a “generous contribution to society and its physical context — be it the public realm, the natural environment or both.”

Significantly, the one-storey home, which nestles into the cliffside framed by a forest of red alder, bigleaf maples and towering firs, punches above its weight. It is one of the few residential properties making the short list dominated by public institutions like libraries and art galleries. “Just making it onto the list is a big honour,” says David Shone, a Patkau partner. 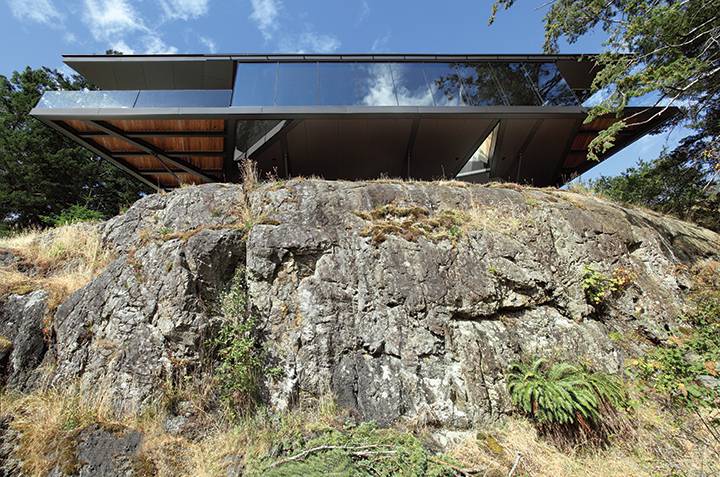 From a rocky bluff, the low, one-storey structure appears to watch like an eye over the Strait of Georgia. With the exception of the nine-foot-high ceiling in the living room, the rest of the home’s ceilings reach 7.6 feet, further contributing to the sense that this home recedes into the landscape from its projection over the bluff.

The 4,500-square-foot Tula House is named after the charitable foundation that owners Eric Peterson and Christina Munck started after Peterson sold Mitra Imaging, the company he co-founded, to Belgium-based Agfa-Gevaert NV, reportedly for around $300 million. The foundation puts its assets to work in rural and indigenous regions of Guatemala and in two First Nations communities in B.C., plus the Hakai Institute, a science research centre that operates on Quadra and Calvert islands, UVic’s Environmental Law Centre Clinic and the Nature Conservancy of Canada. 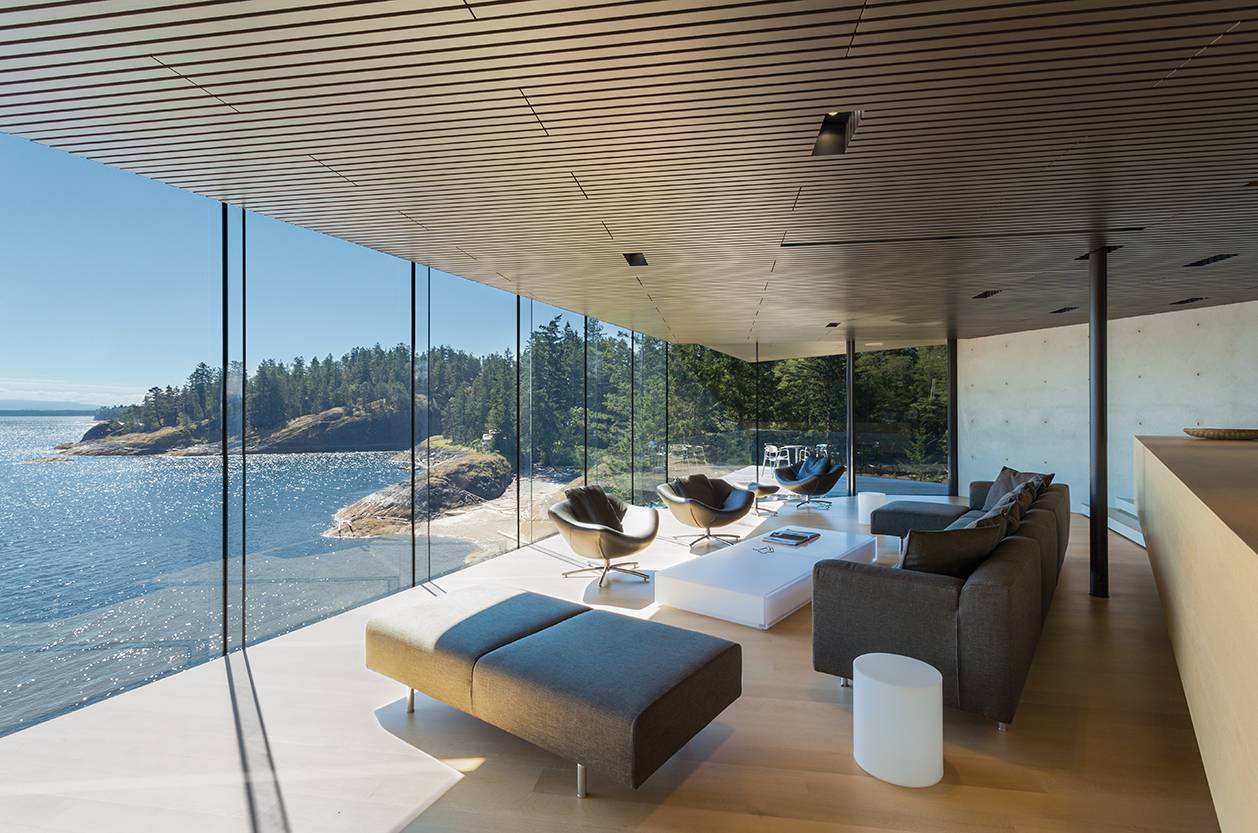 A palette of glass, white concrete and white- and black-stained oak blends with the sand, bleached driftwood and rock in the natural world. The custom coffee table was designed by Patkau Architects, while the low-profile sofa was sourced from Inform & Ital. In several places — including the triangle in the living room floor (see cover) and in the shower in the master ensuite — triple-laminated glass panels in the floor provide a view of the beach below.

On Patkau Architects’ website, a sketch of a nautilus shell overlays the drawings of the home, so it is easy to identify the mathematical sensibility of the shell’s shape with Tula House’s general form.

You enter the home between two angled rock walls that draw visitors into a serene inner courtyard with a natural groundwater reflecting pool. Beyond the front door is a sweeping inner chamber that leads the visitor to the public spaces with panoramic vistas. Asked whether there are architects or projects that inspired Tula House, Shone simply says: “We’re not attempting to emulate anyone.”

In going their own way, they have created a home attracting global attention. Floor-to-ceiling windows sweep open to the sea or offer peek-a-boo glimpses into the home from the inner courtyard. In the bedrooms, low windows start at the floor line, stretch the full length of the walls and open like camera apertures to the landscape below. A concealed motorized blind system by Solarfective shields the home from the sun and provides privacy, something rarely necessary because of the home’s remote location.

Peterson says he and his wife chose Patkau because “It felt to us more that we were commissioning a work of art rather than a dwelling. In fact, it has turned out to be wonderfully successful in both regards.”

He notes that he and Christina “fought the impulse to be involved in the design.
“Our approach was to find an architect who had the vision and confidence to create an ambitious structure that was inspired by the landscape and in harmony with it,” he says. “We knew that we shared sensibilities with the architects, including respect for the California modern ‘cliffhanger’ tradition that can be seen in Arthur Erickson’s early houses like the Graham House and modern Japanese architecture. Beyond that, we didn’t second-guess what the architects had in mind. We like the fact that the house has a few big ideas, executed with consistency and confidence throughout.

“People speculate that the house, with all that concrete and glass, would be sterile and rather cold, but in fact it is very warm and quite intimate in its way. It is a wonderful place to work. Our work is so much concerned with the coastal oceans of B.C., so the house’s setting puts us right in the context of our work.”

Tula House is “very connected to its site,” says Shone, adding: “I don’t think it would ever be built in another location.” The form of the house is a series of stacked angular and irregular geometric shapes. Patkau’s brochure on the home describes the shoreline below the house as “littered with the flotsam and jetsam of the ocean where logs and rocks have been tossed around by the tides and storms like a child’s game of ‘pickup sticks.’” 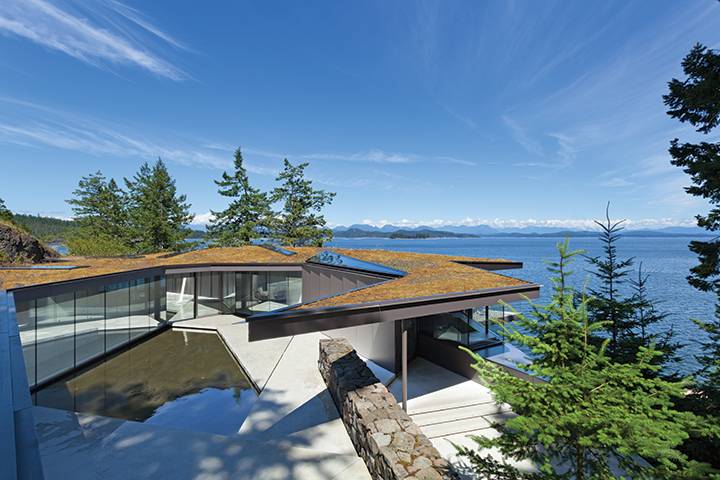 The home’s position on the site takes into consideration the views of the open water, a nearby island and distant mountains. To the south there is a small tidal basin, while basalt mounds and a Douglas fir forest interspersed with deciduous trees back the rear of the property. The home is pushed into the side of the cliff and its mossy green roof seamlessly integrates into the natural surroundings so well that sometimes foraging deer wander on top. Its natural look belies its mechanical supports, including a water-to-air heat pump, in-floor radiant heating and heat ventilation recovery controlled by an automated building- management system.

Six years in the making, the result was even more exceptional than first envisioned. A decision to work closely with “some remarkable” local craftsmen and trades on the island, guiding them to adapt to techniques “not characteristic in the Quadra Island construction palette,” was a factor in the time the project took to complete. In some instances, it was the first time local trades had used the architect-chosen materials like steel and exposed white concrete. To ensure the exposed white concrete was completed to the highest standards, the technique was first perfected in unseen areas before working in areas where the material would be seen at its optimal luminescence. 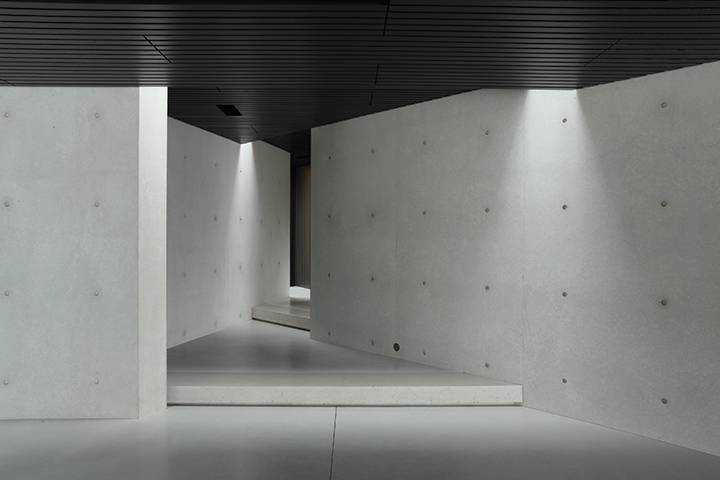 In the entrance, exposed concrete, white and luminescent, dramatically contrasts with the dark-stained battened ceiling. Slivers of natural light are projected into the space from skylights.

Peterson says the house is a celebration of “design, engineering and craftsmanship.” His father, Ben Peterson, now retired, was a Victoria architect; his brother, Chris Peterson, served as the structural engineer on the house; and contractor John Toelle and most of the crew count as personal friends and neighbours. “We have a personal investment in all three disciplines … Without that tradition of craftsmanship, creativity, ingenuity and patience, the project would never have come together.” 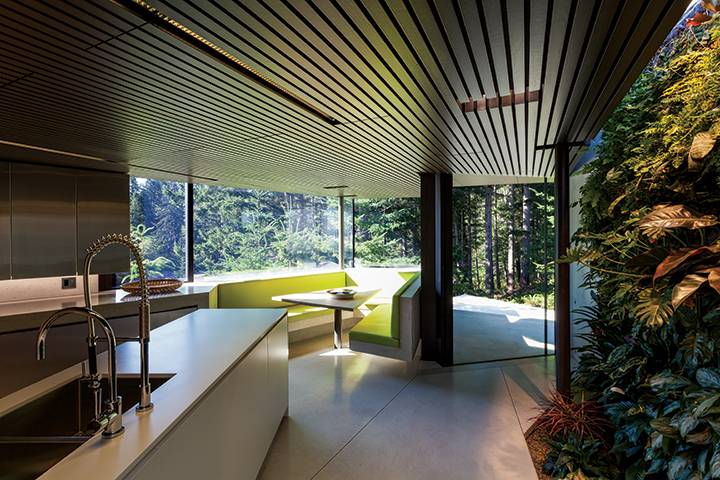 A floating island blanketed in white Corian faces a luscious tropical vertical green wall installed and designed by Vancouver’s Green Over Grey Living Walls and Design, which has installations around the world. The cabinets are a combination of stainless steel (uppers) and white oak (lower), riffing off nature’s palette. No expense was spared on the appliances which include a Fisher & Paykel gas cooktop, Sub-Zero integrated refrigerator freezer and GE Monogram built-in ovens. 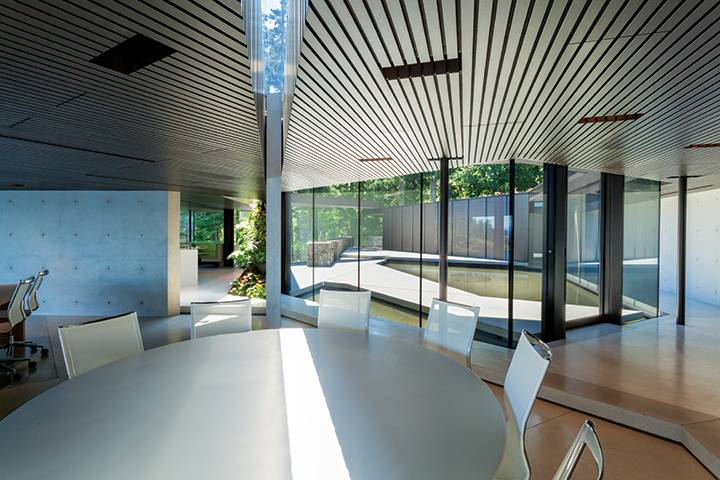 Glazed windows wrapping the perimeter of the courtyard offer the big reveal of the interior where natural light slips through narrow skylights, criss-crossing the roof like tossed pieces of driftwood. 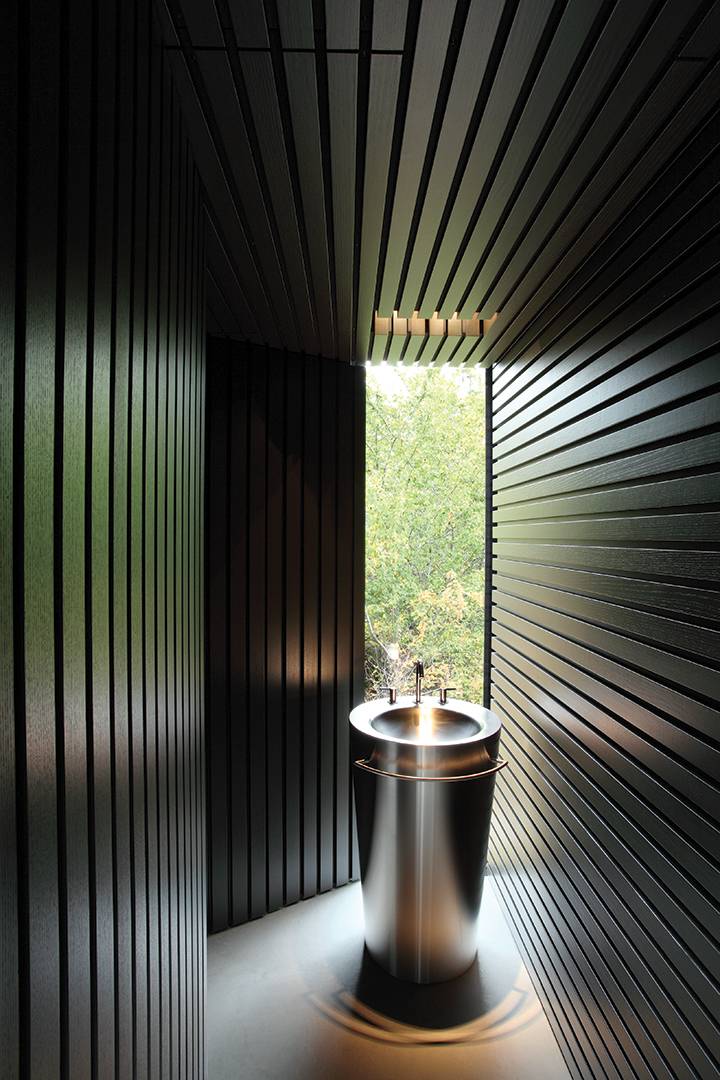 The powder room, like the three ensuite bathrooms, has a Patkau-designed pedestal sink fabricated in stainless steel by Quest Metal Works in Vancouver. The autonomous floating form is another “flotsam and jetsam” element, and the reflective stainless steel becomes animated by the surrounding materials. 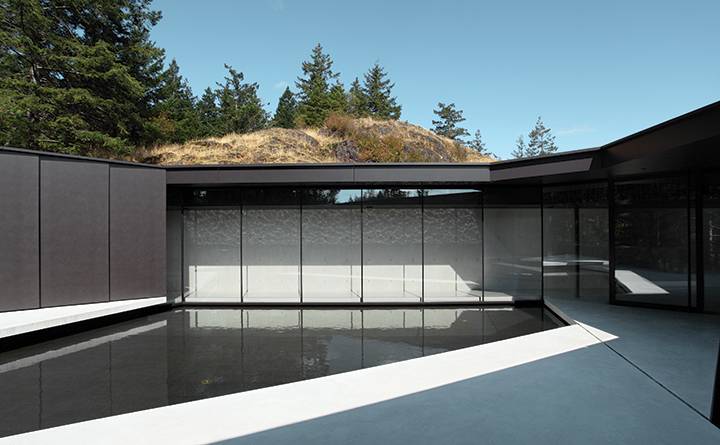 The approach to the house includes a mix of gravel, trees and low stone walls that guide the visitor to the entry courtyard. There, a small pool, created from groundwater naturally passing through the site and momentarily at the surface, instills calm before arrival. Swisspearl fibre cement cladding in charcoal brown permits the home to meld into the nearby coniferous forest. In places like the interior courtyard, the panelling has been arranged into a tilted, shingled pattern to create ever-changing shadows on the facade.