Recently I made a trip to the wild western edge of Vancouver Island, ostensibly for a holiday, but mostly to taste the Humboldt squid at Wolf in the Fog yet again.

Charred on a hot grill, sliced thin and so surprisingly tender, it’s a simple dish, but one that embodies chef Nick Nutting’s love of Tofino’s remote coastal terroir. And, like the crunchy seaweed salad of local bull kelp or the rare gooseneck barnacles he serves, this unusual squid tastes fresh and clean, the essence of the ocean. 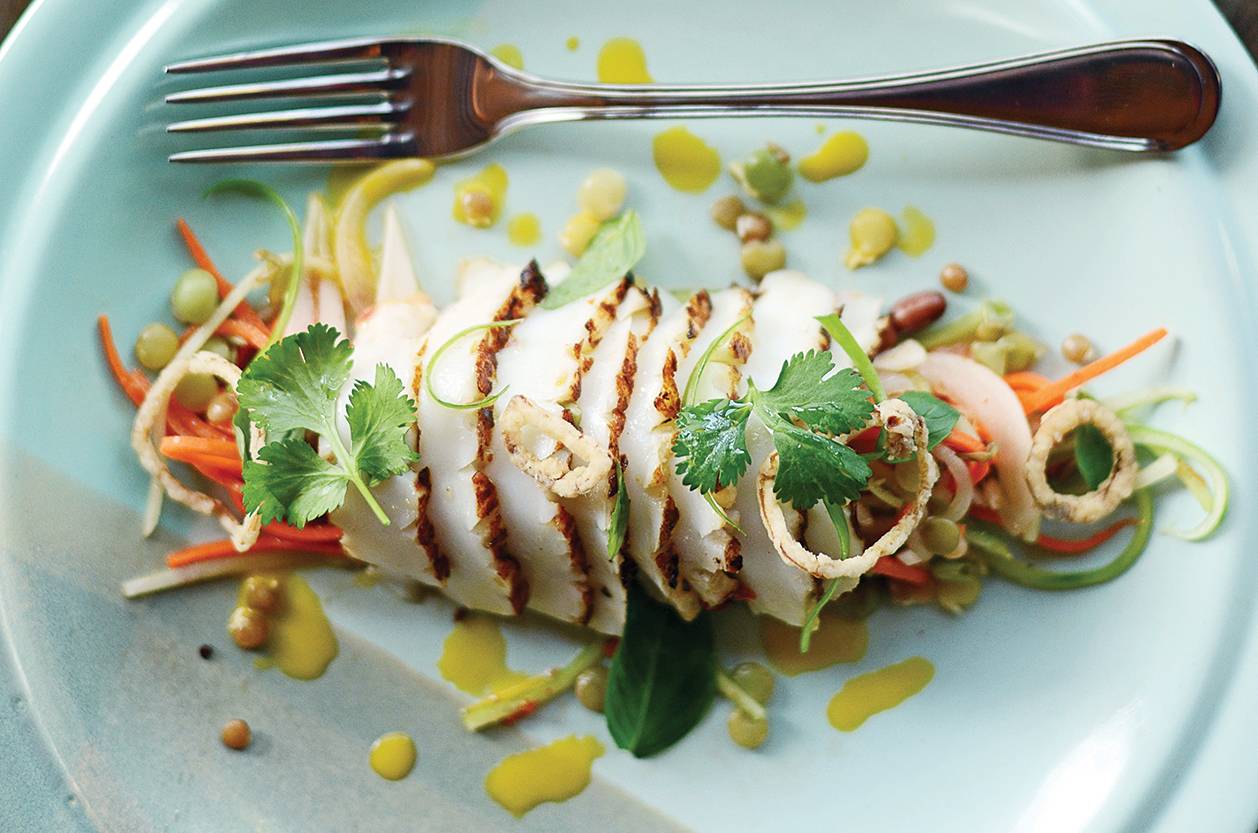 Charred Humboldt squid with Vietnamese slaw by Chef Nick Nutting of Tofino’s Wolf in the Fog.

The Humboldt squid is a relative newcomer to B.C. waters, first pushed north from California and points south on warm El Niño currents. Unlike the ubiquitous baby squid imported from Asia, the Pacific Humboldt squid fishery is eco-friendly and “green- lighted” by Vancouver Aquarium’s Ocean Wise program. This darling of sustainability-minded chefs is popping up on menus across the country.

And I’ve been hunting this monster of the deep on Victoria tables, too. At Fish Hook, chef Kunal Ghose is so enamoured of this massive mollusk, he’s using it in many creative ways, from his Humboldt squid pakoras, fried in a crispy chickpea-and-cornflour batter, to the flash roasted Tandoori Humboldt squid, tender ribbons glazed in a spicy sauce. There’s even a squid option when you order his coconut curried seafood biryani.

“Finally, I can serve squid again,” says Ghose who serves only Ocean Wise certified seafood. “I haven’t been able to serve regular calamari because it’s not considered sustainable, but Humboldt Squid is fished along the west coast from Mexico to Alaska, and there’s no worry about overfishing.”

Jeff Keenliside, executive chef for the Oak Bay Marine Group, serves this sustainable squid on his Ocean Wise menus, too. From the chunky buttermilk-fried calamari and the shawarma-spiced grilled Humboldt squid with kale, crispy Moroccan chickpeas and hummus on the menu at the Marina Restaurant, to the salt-and-pepper squid served on the Canadian Princess in Ucluelet, it takes to both simple and exotic preparations.

“My first experience with Humboldt squid was at a pub in Cowichan Bay a couple of years back,” says Keenliside. “Now we use it a lot — it’s so much easier to use than baby squid, there’s such a high percentage yield and no waste.”

And it’s delicious. That’s why you’ll see it served in a crispy squid and bacon clubhouse wrap or a smoky grilled-squid entree at Vista 18; flash-fried with shaved fennel and roasted shishito peppers at Canoe; or offered up as Ocean Wise calamari strips with roasted tomato-caper aioli at the Six Mile Pub.

DINING WITH THE DEVIL

The Humboldt squid or jumbo flying squid (Dosidicus gigas) first appeared on our culinary radar in 2009, an El Niño year that saw large numbers of the big squid in the waters off the Island, even a bizarre “beaching” of dozens of them on Long Beach in Tofino. Locals described it as an “alien invasion,” which is not surprising.

A Humboldt squid is just one of more than 200 species of this cephalopod, and though it looks just like the whole baby squid you buy from the supermarket, it’s a real giant of its kind — the mantle (body) alone can be more than five feet long, and the largest specimens can weigh 100 pounds.

University of Victoria Environmental Studies professor John Volpe says it can be a “dangerous exercise” to try to land one of these squid, and though they have been encountered by fishers trolling for salmon or tuna over the last decade, it’s unlikely you’ll see one. They live in deep water and scientists agree these “seasonal migrants” only rarely travel from the tropics to our Pacific coast. Some suggest the species is moving north as a result of global warming, but Volpe says there’s no real evidence.

Like all squid, they are short lived and fast growing, but squid are not well understood, says Teddie Geach, seafood specialist for Vancouver Aquarium’s Ocean Wise program. “There are large booms in the population, followed by declines, and it’s not clear if that’s a typical trend or due to overfishing.

“Most common calamari is coming from China and India, where typically a bottom trawler drags the ocean floor, hauling up a lot of different species …,” she adds. “For Humboldt squid it’s a different scenario. The typical range is from Peru to the California coastline, and it’s jig-caught, with a lure on a line, so there’s virtually no bycatch.”

There’s no commercial fishery in B.C. targeting this squid, though local tuna boats, fishing in deep water, land enough for a small supply. In Tofino, Chef Nutting says it comes to him through West Pacific Seafoods, “caught offshore and frozen at sea by local fishermen.” Victoria’s Finest At Sea sells locally caught Humboldt squid when available, but it’s rare.

Baby squid rings are notorious for becoming chewy like rubber bands when overcooked, so I imagined that the Humboldt squid would be India rubber ball tough. But that’s not the case at all.

Unlike octopus, there’s no mechanical tenderizing or marinating necessary for tender results. There are some membranes to peel away — akin to removing the fell from a rack of ribs — but then quick cooking or slow braising is simple. Most chefs say the big Humboldt may be more forgiving as a result of its size.

“For our calamari, we just cut it into thin strips, dip it in buttermilk and fry it,” says Keenliside.

Most chefs score or cross-hatch the tubes the squid comes in before cooking the squid.

“We take the tubes, remove the skin and membrane, score it one way, then score in the opposite direction, slicing through into strips,” says Ghose. “Then it’s pan seared and flash roasted, three and a half minutes. I’m all about quick service.”

So take a chance if you see this super squid for sale at your fishmonger’s, or simply try it at a local restaurant.

“It took me a while to figure it out, but now when I’m asked what I recommend, it’s the squid,” says Ghose. “I haven’t had an ingredient excite me as much in a long time!”