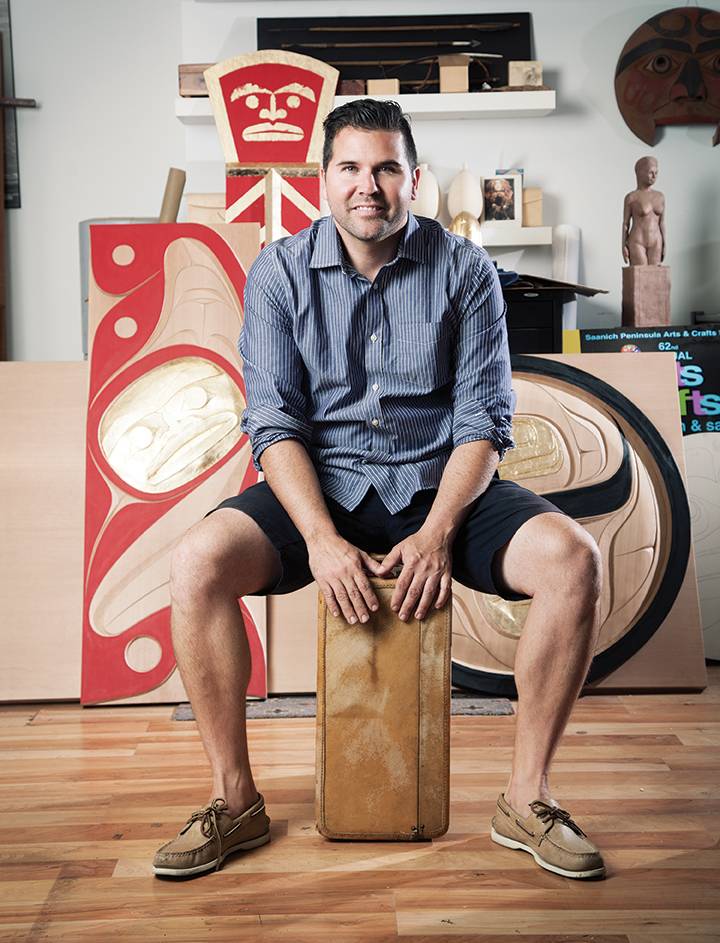 A portrait of Tin Tin, the fictional young Belgian reporter depicted in the cartoon series by Hergé, isn’t what you’d expect from an Aboriginal artist steeped in First Nations traditions. Riding a bull in New York’s financial district doesn’t come to mind either, but Rande Cook bucks the stereotype. “If I have to do another killer whale motif I’m going to shoot myself,” he laughs. Cheeky but original, Cook’s mission is to redefine Native art.

What gets him steamed up
Nostrils flaring and poised to charge, New York’s iconic bronze sculpture, the Wall Street Bull, is a powerful symbol of capitalism and prosperity.

“It was 2012 and I was taking a jewellery course in New York and I thought ‘what does New York mean?’ Well, consumerism, finance, Wall Street. I’m going to make a Louis Vuitton Native mask,” Cook recalls.

So he carved a cedar mask, decorated it with gold inlay, slapped on the Louis Vuitton logo and paraded around Times Square before moving onto the financial district and climbing atop the bronze bull. Fellow artist Luke Marston took pictures for what eventually became an installation.

“I like to have fun,” says Cook, dismissing his homemade mask as a device, not a cultural artifact. Make no mistake: Cook is very clear about using his heritage to make a statement versus making a buck off his culture’s spirituality. “Somebody likes a mask. They take it home, they hang it on their wall but they don’t know what that means. They don’t know the story behind it. It just doesn’t sit well with me. We have strong stories; we have metaphors just like the rest of the world. Can we not connect on an international level based on our stories and not based on the masks?”

His early influences
Cook grew up in the culturally rich community of Alert Bay. When he asked his grandfather to help him become an artist, his grandfather told him to get himself a sketchbook and “draw, draw, draw.” He credits fellow resident Doug Cranmer with pushing him beyond the obvious. At that time, Cranmer, a highly respected Northwest Coast artist, was already experimenting with streamlining and simplifying his bowls and totems. “He was right at his peak when I was growing up in Alert Bay,” says Cook. “It opened the door for me to evolve, still using traditional elements but in a contemporary way.”

How he chooses his subject matter
Cook likes to mix genres. “I ask myself what can I do to turn heads and get people’s attention,” he says from his Bridge Street studio, ready to jump into whatever medium strikes his fancy. Pop art? No problem. Tin Tin was part of a series inspired by modern culture. 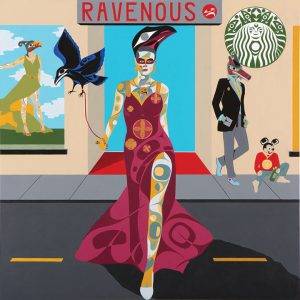 With Ravenous, Cook adopted the European tradition of narrative painting. A fashion model in traditional dress tethers a raven, the Northwest Coast symbol of creation and knowledge. A wolf loiters in the background. An intoxicated Mickey Mouse lies slumped on the sidewalk. “It’s about the state of the world,” says Cook lamenting the rise of personal gratification over spirituality. Yet he’s kept the figures flat and two-dimensional, reflective of his Native roots.

“There is no blending of colours. It’s very First Nations style,” he says.

Why he doesn’t like the term ‘traditional Native art’
Cook insists he’s not a political artist, but Ravenous and an earlier piece called Idle No More, which criticizes the government for the Indian Act, definitely carry a point of view. Cook realizes deviating from what’s expected from him, that is safe, “authentic” Native art, may alienate some people but he’s unapologetic. “There are lots of galleries who would say, ‘Well, we’d never carry that because it’s not traditional.’ They’re telling you that because that’s what they can sell. I think that handicaps a lot of artists because they have to pay their bills and a lot of them become stuck. There’s no artistic growth in that.” La Tiesha Fazakas, owner and curator of Vancouver’s Fazakas Gallery which is mounting Cook’s September show called Form-a-Line, admits it’s easier to sell what’s safe and proven but adds “That’s one of the things I like about Rande, he’s willing to take risks and challenge the audience.” The show focuses on formline, the traditional Northwest Coast custom of outlining the subject in flowing, curving lines and then colouring it in. Always inventive, Cook reduces and simplifies the outlines, pushing them towards the abstract. “His art and his culture are for sale on his terms,” Fazakas says. “That means you don’t get to appropriate his culture; you get to appreciate his culture.” 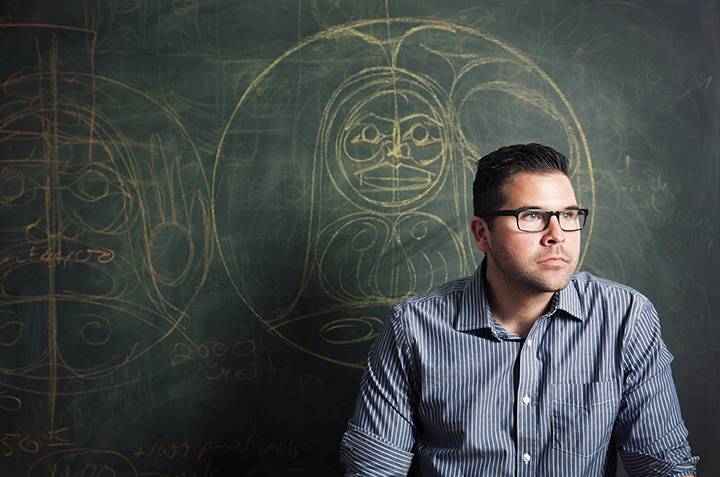 Why his upcoming fashion show is so important
Cook cherishes his Aboriginal roots — as a hereditary chief of the ‘Namgis tribe, Kwakwaka’wakw First Nation, he travels to Alert Bay every two months to attend potlatches and immerse himself in tribal life — but he’s a man of the times too, choosing to work with many styles and materials, paint, photography, film, you name it. For the past two years he’s been working on a performance piece, which he plans to unveil in Victoria in 2016 (date to be announced). The goal is to take traditional origin stories and bring them up to date through fashion.

“There’s going to be old-fashioned music with DJs mixing new beats,” he says. “There’s going to be a video put together with some old Edward Curtis images dissolving into modern images and then traditional thunderbird costumes will lead couture dresses out on the stage to show the progression.”

It promises to be a mix of fun, fashion and history — and yes, Cook is making a point. He wants us to recognize Aboriginal art can be hip and modern and not stuck in the past. “I think for our culture to live, especially within our own people, we need to make it fresh,” he says. “We need to keep reinventing. I don’t want to be pigeonholed as an Indian artist.” And neither, he says, do his peers.