Stone is the most ancient material on the planet, predating even the first living cells. A single piece of sandstone, plucked from a riverbed, tells an evolutionary story millions of years old — a geological record of the weather, floods, fire and all the living things that came and went before we humans even entered the picture. When used as a medium for art, especially in the hands of artists with an intuition for the secrets locked within, stone takes on a magical quality, like a portal into the ancient past.

Ancient Art of Stone owners Andreas Kunert and Naomi Zettl are globally known as artists who translate these ancient stories of stones into extraordinary pieces that give new meaning to the word timeless.

From megalithic structures like “The Family Circle” outside the Nanaimo Ice Centre to intricately whorled mosaic walls, fireplaces and panels comprised of thousands of stones carefully selected and set in place, Kunert and Zettl are prolific artists with a collaborative creative vision that hasn’t yet met its limit. 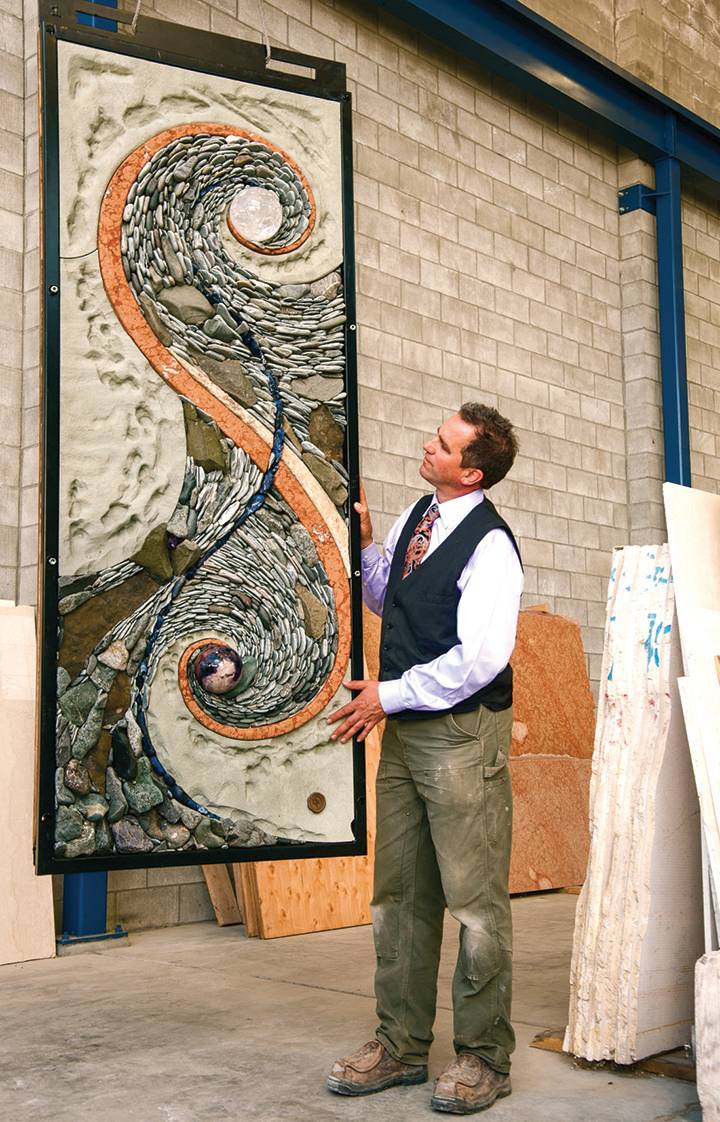 “Love Story,” a mosaic wall commissioned by the Town of View Royal, features sweeping rows of rose quartz and aventurine with a central heart stone from Saskatchewan.

When A Rock Becomes A Stone
Kunert, a master stone mosaicist, has spent the past 20 years working with stone, first in the quarrying business, then building megalithic stone structures and intricate masterpieces of mosaic art. He says people often ask: When does a rock become a stone?

“Rocks are all over the place,” he explains. “When you pick one up and fall in love with it, that’s when it becomes a stone.”

His own love affair with stone began in a childhood spent near the Rock of Ages granite quarry in Vermont. Later, as an apprentice stonemason, he discovered his affinity for knowing exactly which stone should be placed where in every project. A deep passion blossomed: he began to travel the world, searching for and collecting stones from places like the Grand Canyon and the Sahara Desert. Forever in search of a greater diversity of slabs, stones and pebbles for his creations, he founded his own quarry in Nanaimo with just a pry bar and a pickup truck.

Eventually, Kunert began to translate giant slabs of rock into works of art that somehow had the power to stir the souls of his clients.

“I discovered the effect standing stones have on people when clients came to the quarry one day wanting a pond surrounded by standing stones,” says Kunert. “When it came time to place the stones, I just knew exactly where they should be. And when I walked through those stones, I felt something. The stones were a portal; you could tell.”

Soon, Kunert was receiving commissions from around the world, creating fireplaces, walls and garden structures into which he incorporated both standing stones, and intricate mosaics using stones and pebbles of every shape, size, type and colour.

Remarkably, he uses no tools to measure or calculate his trademark swirls, which are, in fact, mathematically correct Fibonacci spirals. Although this phenomenal ability has been studied by a Harvard scholar specializing in mathematics in art, Kunert’s focus is
always on creating the visions inspired by the stones.

“I can feel in my hands where each stone should go,” he says. Rarely does he set a stone wrong. 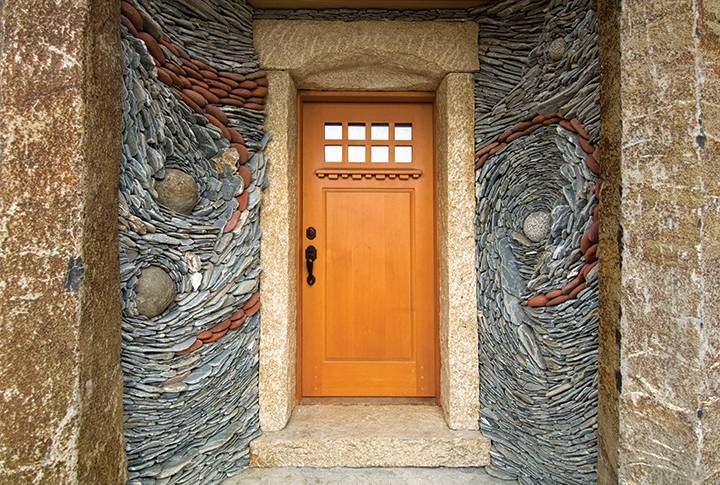 A stone entranceway, created for an office, frames the door in chiselled granite and swirls of natural stone.

Enter the Soulmate
Kunert’s art took on a more spiritual dimension after he and Zettl were introduced by a mutual friend in 2009. Kunert says Zettl added an essential element that had always been missing from his work: “The understanding of the deeper invisible connection to the material I was so drawn to work with.”

Zettl’s unique background as both an artist — she is a sculptor and painter — and a healer opened the door to a new approach for their art and business.

“Naomi has a wonderful ability to get behind the veil of people — to discover who they truly are,” Kunert says.

Zettl, whose extensive training as a healer includes a seven-year apprenticeship with Cree Elders in her native Saskatchewan, says that in order to create a finished product clients can truly connect with, it’s important to start with a good understanding of the client’s personality.

Each project begins with a conversation, not just about dimensions, aesthetics and cost estimates, but about the clients themselves. Zettl and Kunert say they incorporate that understanding into commissioned works so that the finished product resonates deeply with the client. 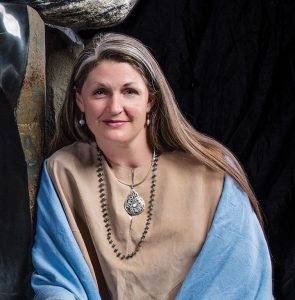 “All of creation has spirit; everything has energy.” — Naomi Zettl

“All of creation has spirit; everything has energy. Our life purpose is to discover our part, our connection to that spirit,” says Zettl, whose training relates naturally to her work with Kunert since, she says, stones of all types have specific healing properties.

She incorporates her sculpting techniques as well as her use of fossils, crystals, precious and semi-precious stones like quartz, amethyst and sapphire into their collaborative pieces, like the 650-foot mosaic wall in View Royal, which features sweeping rows of rose quartz and aventurine with a central heart stone Zettl brought with her from Saskatchewan.

That project, entitled “Love Story,” was the first collaborative commission for Zettl and Kunert. It tells their story: how they met and came together in love and art. The three swirls represent the couple, cradling their newborn son between them. It depicts their two complex yet complementary personalities coming together as naturally as the stones in the piece itself — soulmates in life and art.

The deep emotional connection they feel for “Love Story” is exactly what they strive to create for every one of their clients.

“In our work, each stone has significance,” says Zettl. “At the end of every project, we sit down with people to talk about the process and why we were drawn to the particular stones we chose for them.” Whether they’re asked to build a megalithic structure in a secret garden or an intricate fireplace incorporating fossils and the rarest of stones, Zettl and Kunert say they hope to create pieces that speak to their clients’ souls. 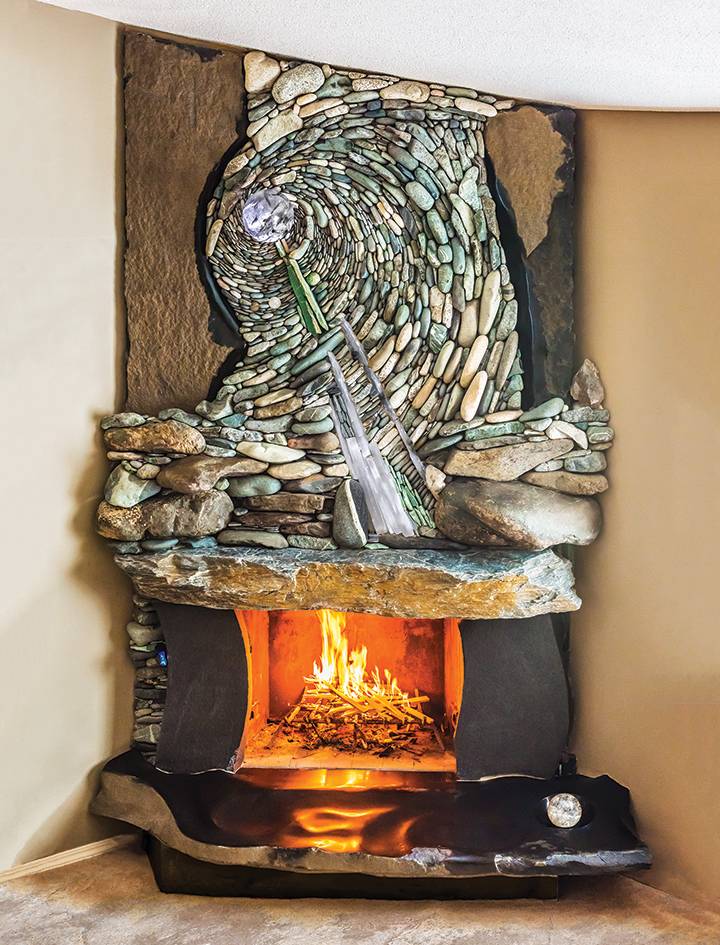 Anchored within slabs of basalt and Ocean Pearl, this fireplace — a private commission called “Harmonic Revelation” — features flowing water-worn and semi-precious stones, with an illuminated crystal ball at its centre, which “emanates inspiration.”

With increasingly complex new projects like their stone kitchen islands and bars featuring secret drawers and elements of steel, this couple’s collaborative abilities are in high demand all over the world.

They are always collecting, searching the world for unusual and rare specimens to include in their works and focusing on creating works of art designed and built to last forever.

For Zettl and Kunert, their work is more than a craft — it’s a philosophy of living. Working in sync, they inspire each other and meld their creative forces into pieces that express our deep and inherent connection to the natural world — to our past and to our future.