This favourite holiday recipe, so often passed down through families’ generations like heirlooms, is really all about the butter. 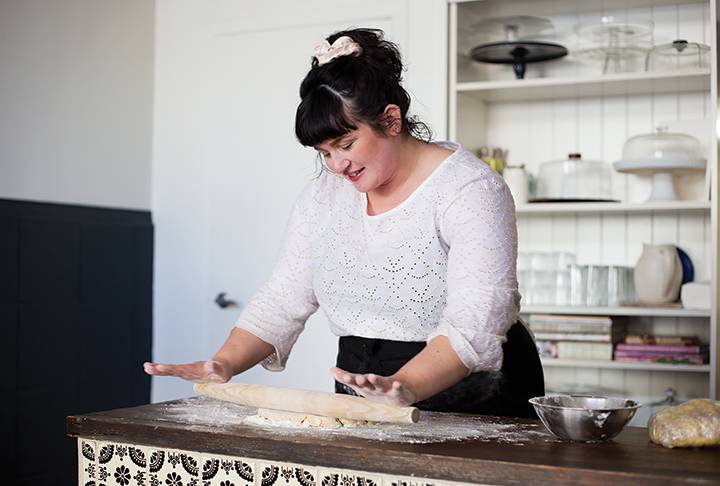 Shortbread is the cookie in my family, and the only cookie that’s imperative to serve alongside the butter tarts and fruitcake at holiday gatherings. It’s traditional Scottish shortbread, the Glaswegian kind my mother made, and her mother too. My mother, now the official shortbread baker in our family, still brings us a big tin of her snappy shortbread to devour when she visits over the Christmas season.

Shortbread is all about the butter — the shortening (a.k.a. fat) that makes this simple cookie “short” or especially crisp and crumbly.

My mother’s shortbread is a perfectly portable, utilitarian treat — pale squares, unadorned save for a punctured pattern made with the tines of a fork. Just three ingredients combine to create its simple, buttery goodness — sugar, butter, and flour — in the perfect, tried-and-true ratio.

It’s the technique that makes my mom’s shortbread truly memorable. Soft butter, creamed well, and combined with sugar and flour, then quickly gathered into a ball (with her conveniently cold hands) and formed into a thick slab using the wide blade of a knife. It’s then cut and transferred to the cookie sheet, the fat fingers huddled tightly together to bake until firm and barely tinged with gold.

Though some recipes call for rolling shortbread dough and cutting the cookies into various shapes, that would be unheard of in my house — it’s over-handling that creates tough shortbread, says my wise mum. For cookies that are both firm and crumbly,
the less manipulation the better.

The climate may be a factor in perfect shortbread too. My mother decrees that shortbread must have good bite. There’s nothing worse than soft shortbread — God forbid you store your shortbread cookies together with something moist like fruitcake or tarts, and the cookies lose their snap.

Our Christmas cookie care package, arriving as it does from the cold, dry prairies, means excess moisture is never an issue. The name says it all — a “short” crisp cookie that always tastes beautifully buttery.

According to lore, the origins of shortbread reach back to 12th-century Scotland, a “biscuit bread” first rolled from leftover scraps of bread dough. Even after the leavening was replaced by the luxury of expensive butter, and the “short” crumbly cookie became a treat reserved for holidays and other special occasions, the “bread” bit of the name stuck — apparently to avoid the tax on sweet biscuits.

Mary Queen of Scots is credited with adding her own twist to shortbread cookies — spices, nuts and candied citrus turned up in shortbread after her reign, and the cookies were pressed into round molds and cut into triangular “petticoat tails,” the way she liked them.

Though the first recipe for shortbread was published in a Scottish cookbook in 1736 and called for various ingredients, including yeast and eggs, by the mid-19th century, the recipe was pared down to its current combination of butter, sugar and flour (sometimes oat flour).

Queen Victoria loved Scotland — and Scottish shortbread — and Balmoral shortbread was reportedly served to her daily. In Lancashire, shortbread is still flavoured with caraway and coriander seed, while some U.K. versions have ginger, almonds and orange peel.

Beyond Scotland, shortbread-style butter cookies morphed around the globe to include treats like nutty little Mexican wedding cakes with ground pecans, Greek kourambiedes, softened with powdered sugar, and Viennese crescent cookies that combine both ground nuts and icing sugar for a tender bite. Germans make shortbread, or heidesand, with nutty browned butter and additions like candied ginger, orange and rosemary.

The Scandinavian piped or pressed spritz cookies get their tender texture from egg yolks and a splash of milk. For French sablés, a rolled butter cookie from Normandy, the sandy texture is created by the technique of cutting the cold butter into the flour and binding the cookie dough with egg yolks.

But the Scottish shortbread cookie is the original, and it’s the inspiration for all of these buttery sweets. It’s a holiday cookie, originally served in Scotland for Christmas and Hogmanay, the New Year’s Eve celebration. The cookie’s shape is always simple — either thick fingers or large discs, the stiff dough pressed into pans or decorative molds to bake, then cut into wedges. 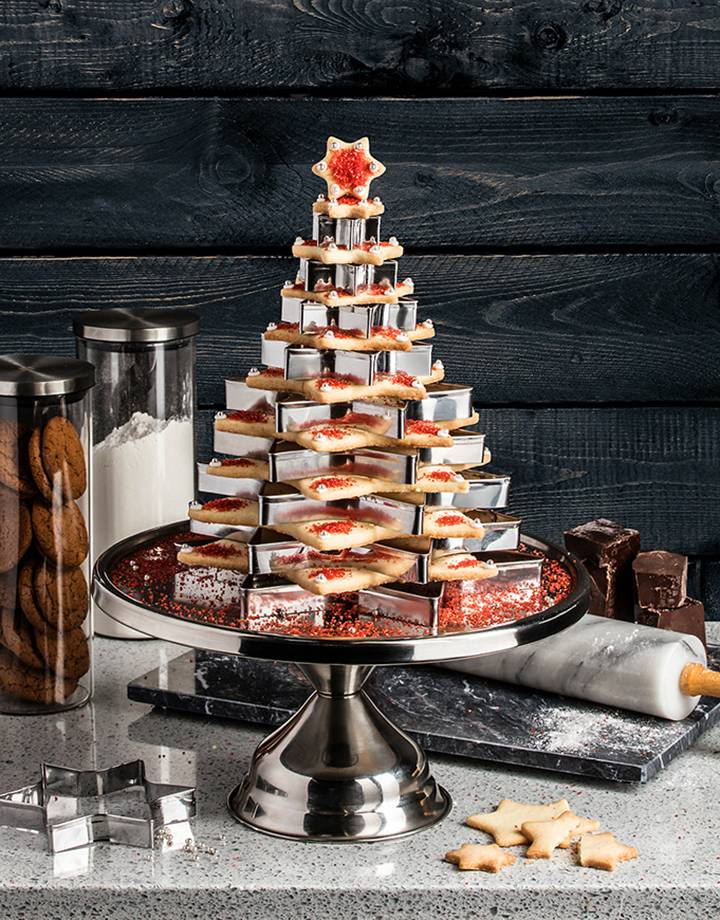 Ruth & Dean’s Susannah Ruth Bryan is, like me, a fan of her mom’s shortbread recipe. “Shortbread is really personal,” says Bryan. “It should snap on the exterior, and the interior should be buttery.”

For the shop, Bryan’s shortbread is flavoured with orange blossom and zest, pressed into a pastry pan and cut into wedges. But it’s all about the best butter.

“I spend $9K on butter every year,” she laughs.

At Ottavio, baker Cam McCaw makes three kinds of shortbread — rounds studded with cranberries and pistachios, whipped lavender-scented shortbread, and piped rosettes of shortbread filled with chopped figs. He only works with premium 84 per cent New Zealand butter, essential for butter cookies and the laminated pastry for croissants.

“The biggest flavour component is the butter — but it’s also about the fat and water content,” says McCaw. “There’s an astonishing difference.”

“I buy 25-kilogram blocks, and use one and a half a week. I’ve used all kinds of butter. After New Zealand, I like the butter from Belgium, Ireland and Arizona — Canadian butter falls dead last.”

It’s All About The Butter

The best bakers select unsalted butter. It’s considered fresher and allows the salting of baking to taste. The vast majority of butter you can buy today in Canada has a fat content of 80 per cent. But there’s a movement in the fine food world toward hand-churned, small-batch, artisan butters — rich, silky butters that attain a higher fat level of 84 per cent butter fat (the standard for butter in Europe).

You’ll pay at least twice the price for these higher-fat butters, but when you taste the premium butter from companies like PEI’s Cows Creamery, Ontario’s Churn84 or B.C.’s Golden Ears (grass-fed, 88 per cent butter fat), you may never go back to regular butter.

There’s a distinctive taste and texture in these higher-fat butters. Better too on a fresh baguette or in shortbread — with 10 to 20 per cent less water than standard commercial butters and a higher melting point. It simply makes the best butter cookies.

(If you’re using regular butter, a trick is to soften a pound, wrap it in cheesecloth and squeeze the excess water out.)

The ratio of fat to flour is important too. Not enough flour, and the cookies will be greasy and chewy instead of crumbly and crisp.

Though it would be heresy in my family, some shortbread bakers, seeking a softer result, swap out a quarter to a half a cup of the all-purpose flour for rice flour or cornstarch.

When making thicker shortbread fingers, the “docking” with a fork helps to allow steam to escape while baking for a crisp cookie.

Bryan bakes her shortbread at 350˚F, but if you like a drier cookie, start it in a hot 425˚F oven, turn the heat down to 300˚F immediately, and bake it longer “until barely brown on the cut edges.”

Maida Heatter is the queen of cookies — at 102 the James Beard Hall of Fame inductee has baked, and given away, a lot of cookies. She says it makes her happy.

It makes others happy too, she writes in her seminal cookie book, Maida Heatter’s Brand New Book of Great Cookies (published when she was 81!).

“I’ve had a few problems in my life, but what to do with cookies has never been one of them,” Heatter writes. “I give them away, and it is magic. It makes people happy, and that, in turn, makes me happy.”

I’m always happy to receive my mother’s gift of her perfect shortbread. Give it a whirl — and give it away. You’ll have the happiest holiday!

If you’re interested in baking some of your own shortbread, take a look at our 3 recipes from YAM’s own Cinda Cavich.