From coconut flurries to fluffy meringues, and icing as white as newly fallen snow, it’s the season for dreamy desserts. 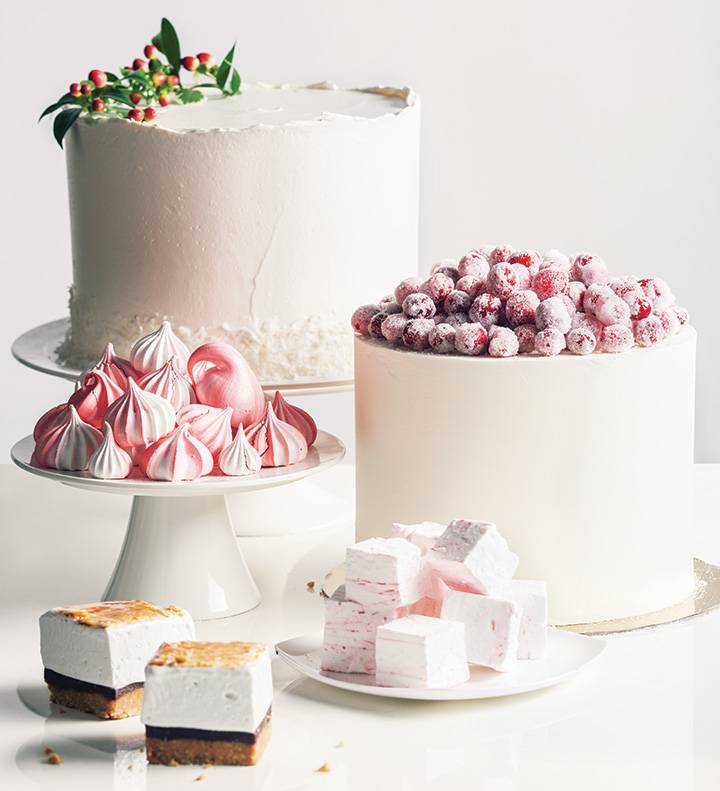 We don’t often see the white stuff outside in this part of the world. But this year, I’m dreaming of a snowy white Christmas, and planning a holiday dessert table that’s loaded with fluffy coconut and vanilla cakes, drifts of ethereal meringues and marshmallows, creamy eggnog and white chocolate. Of course, there will be room for traditional treats like my mom’s boozy dark fruitcake and her snappy Scottish shortbread, but I’m setting a frosty festive scene, an ode to the Great White North and our season of snow.

Many old-fashioned favourites can morph into something stylish with a simple makeover — vanilla sponge in an updated Bûche de Noël or Marshmallow S’more Slice, a skiff of royal icing or a cloud of meringue topping a holiday tart or cupcake.

I turned to some local pastry experts to ferret out the tips and tricks of the beautiful baking trade, so even in the darkest days of winter, your celebrations can be merry and bright. Here’s how: 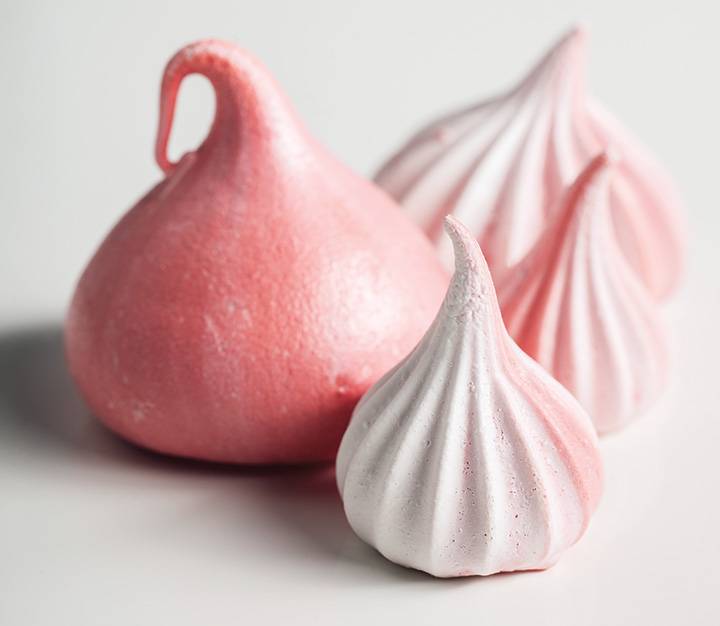 Get the recipe and make Crust Bakery’s meringues

Pavlova may not immediately come to mind when you think about Christmas baking, but for Aussie transplant Tom Moore, the chef behind the breads and pastries at Crust Bakery, meringue is on the menu year-round, and especially at Christmastime.

“We do a lot of meringues — meringue-topped tarts and large, fist-sized meringues that are crisp on the outside and chewy on the inside,” says Moore, touring me through the selection of beautiful pastries laid out in the front window of his busy downtown bakery.

“There are three types of meringue, French, Italian and Swiss,” adds Moore, launching into an explanation of the pros and cons of each style.

To make a classic Swiss meringue, Moore says you gently stir egg whites and sugar (2:1 by weight) together in a double boiler (a metal bowl set over a pot of simmering water) until the mixture reaches 60˚C and feels hot to the touch. Then remove from heat and whip in an electric mixer until cooled and fluffy, adding a drop of vanilla.

French meringue is even easier — just whipped egg whites and sugar — but it’s raw, unstable and must be used immediately, he says. Italian meringue is trickier, requiring that you slowly drizzle a boiling sugar syrup into the softly beaten egg whites while continuing to whip the mixture. Italian meringue is extremely stable, says Moore, and great for piping to decorate cakes or as a base for buttercream icing.

“My favourite is the Swiss meringue — it’s cooked, very stable and always smooth and creamy,” he says. “We use Swiss meringue for everything, piped onto our tarts, then browned with a blowtorch.”

Older eggs are best for meringue, he adds, “and they always whip better at room temperature, so leave your eggs out on the counter.”

For the holidays Moore suggests making large meringue “cookies” for gifts, flavoured with chopped chocolate, peppermint or candy canes, or creating a dacquoise cake by adding finely ground almonds or hazelnuts to the meringue mixture and piping rounds onto parchment-lined sheets to bake. The crunchy meringues can then be stacked into a pretty layer cake filled with whipped cream or white chocolate mousse.

You might also consider making a large rectangular meringue by spreading the mixture over parchment in a sheet pan, then baking it until just cooked but still soft enough to roll into a cream-filled roulade. Or try Baked Alaska, its ice cream centre swathed in a thick layer of frothy baked meringue. 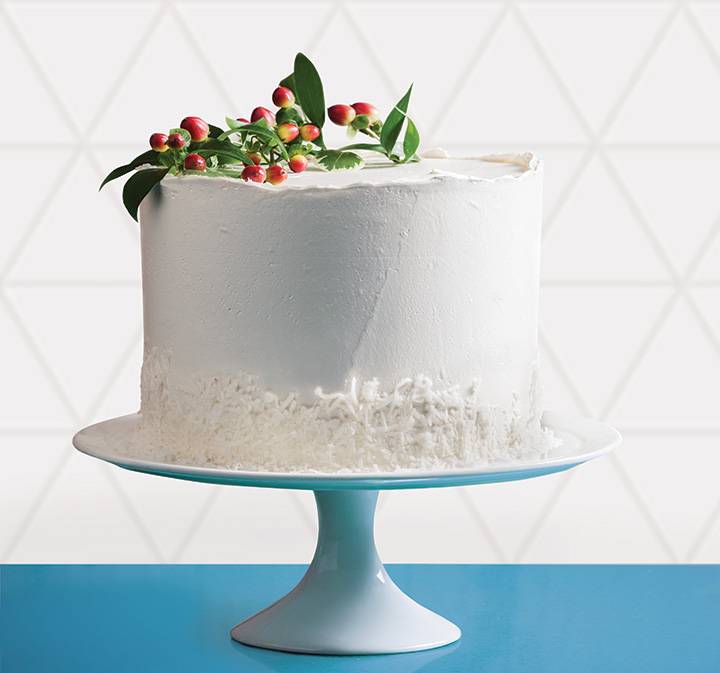 Get the recipe and make Susannah Ruth Bryan’s coconut cake

At Ruth & Dean, the tall coconut cake on the menu is a stunner and perfect for a winter-white dessert buffet.

Pastry whiz Susannah Ruth Bryan also makes profiteroles dusted with powdered sugar and a Victoria Sponge layered with spiced cranberry compote for the holidays, but says her coconut cake is “snowy and light,” and popular year-round.

Inspired by a famous cake long served at the Peninsula Grill in South Carolina, her Victoria version uses coconut milk in the filling to boost the flavour and a simple buttercream frosting.

“I prefer unsweetened coconut,” she adds, “and I always buy medium shred.

These days, coconut oil is touted for its medicinal properties — a highly saturated fat containing medium-chain triglycerides (MTCs) that some say helps the body burn fat, fight infections and fuel brain cells. It can be substituted for other fats, 1:1, when baking too. You can also find coconut sugar — a nutty, earthy brown sugar made from coconut nectar.

I like to buy unsweetened shredded coconut in bulk at natural food stores, Bulk Barn or local grocers like Market on Yates or Root Cellar. You’ll find short or long shreds for baking and larger flakes for decorating cakes and pies. Toast coconut in a dry pan or in the oven.

Though it won’t whip, coconut milk can be substituted for cream in many recipes. 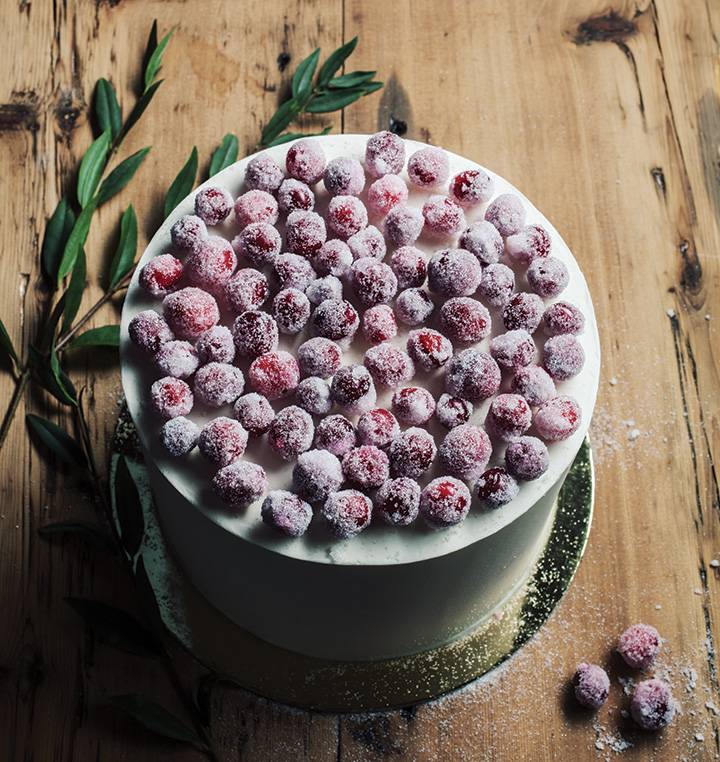 Get the recipe and make Kimberley Vy’s cake

When I asked her to describe a favourite light, white holiday dessert, Sparkling White Chocolate Cranberry Cake came to mind.

“It’s based on a champagne white sponge cake that’s really light and airy,” says Vy as we taste our way through her dessert menu, displayed on beautiful deconstructed plates with bursts of flavourful compotes, mousses, curds and gelées.

Using champagne in sponge cake adds a subtle flavour and sparkle, she says, and the white chocolate buttercream makes a rich counterpoint, along with a tart garnish of sugared fresh cranberries. White chocolate is actually just cocoa butter — chocolate with all of the dark cocoa mass removed.

Melt white chocolate on low heat until liquid, then combine with dried cranberries and/or pistachios for a quick holiday chocolate bark.

Vy often colours her white chocolate with fruit, spices or green tea, or bakes it to caramelize the sugars and deepen the flavour. 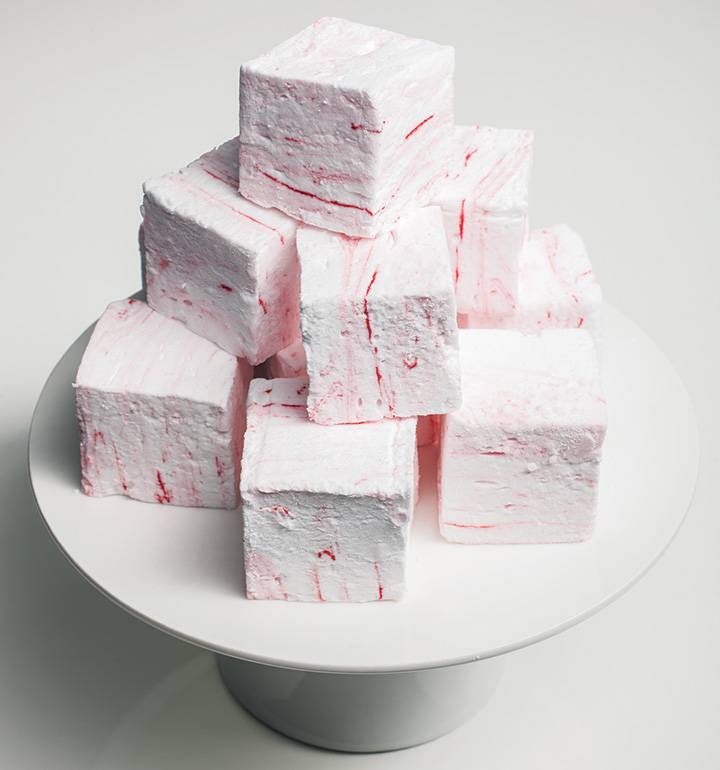 Get the recipe and make these marshmallows

Homemade marshmallows were a holiday tradition in my family, cut into cubes and dusted with icing sugar or rolled in toasted coconut.

Marshmallows make a simple treat or pretty gift and can be plain, flavoured with extracts like vanilla and peppermint, tinted in various colours or swirled with caramel. And they’re easy to make.

Powdered gelatin is the secret ingredient in tender homemade marshmallows, whipped with a boiling mixture of sugar, water and corn syrup until fluffy. Some recipes also include egg whites — sort of a hybrid marshmallow/meringue mixture. Or you can create a vegan facsimile using rice flour, agar-agar and guar gum.

Pastry chef Kimberley Vy says the trick to making marshmallows is working quickly — dust a greased pan with icing sugar and cornstarch, then spread the whipped mixture into a pan, using a well-oiled offset spatula to smooth the top.

These days, chefs love to experiment with marshmallow flavours, from green tea to lavender and raspberry, but to keep your treats snowy white, opt for vanilla, lemon or even peppermint essences. Vy also swirls caramel or dulce de leche through her marshmallow treats.

At Victoria’s Tout de Sweet Confections, the handmade organic marshmallows are fluffy and ethereal and offered in many flavours, from vanilla bean and strawberry to chocolate, lemon and chai. The shop on Fairfield Road also carries things to make your holiday desserts sparkle, whether you’re looking for colourful sprinkles or decorating sugars.

Vanilla comes from beans grown in different parts of the world. Slender Bourbon (a.k.a. Madagascar) vanilla beans have the strongest flavour, while fatter Tahitian vanilla beans have a delicate floral flavour and more paste per bean. You may also find vanilla beans from Indonesia or China, often cheaper but of lesser quality.

To use vanilla beans, cut them lengthwise and scrape out the paste, but don’t throw away the pods. Toss them into a jar of vodka or high-proof Everclear alcohol to steep. In a few months, you’ll have your own vanilla tincture/extract.

Pastry chef Kimberley Vy loves to caramelize white chocolate. Simply chop chocolate, spread on a rimmed baking sheet and bake at 250˚F for 30 to 45 minutes, stirring every 10 minutes, until it’s a lovely caramel colour. Add a pinch of sea salt, if you like. The chocolate will be liquid at this point — pour into a bowl and use an immersion blender to smooth out any lumps. Spread caramelized chocolate on parchment to set for bars and brittle, or store in a jar and reheat to drizzle over cakes, swirl into ice cream or fill macarons.

Eggnog is the classic bevvy at this time of year, but there’s more to eggnog than boozy milk punch, spiked with rum, brandy, bourbon and other dark spirits.

Many cultures make this kind of eggy seasonal punch — think Puerto Rican ponche with coconut milk, Texas-style eggnog with tequila and sherry, and the Prohibition cider nog. In Peru it’s made with pisco (a local white brandy), and there’s even a recipe floating around for vegan eggless nog, made with soy milk and silken tofu (and rum, of course).

Make a warm eggnog sauce to serve over a Christmas cranberry pudding, steam it up with espresso for eggnog lattes, or use eggnog instead of milk in holiday French toast or bread-pudding recipes.