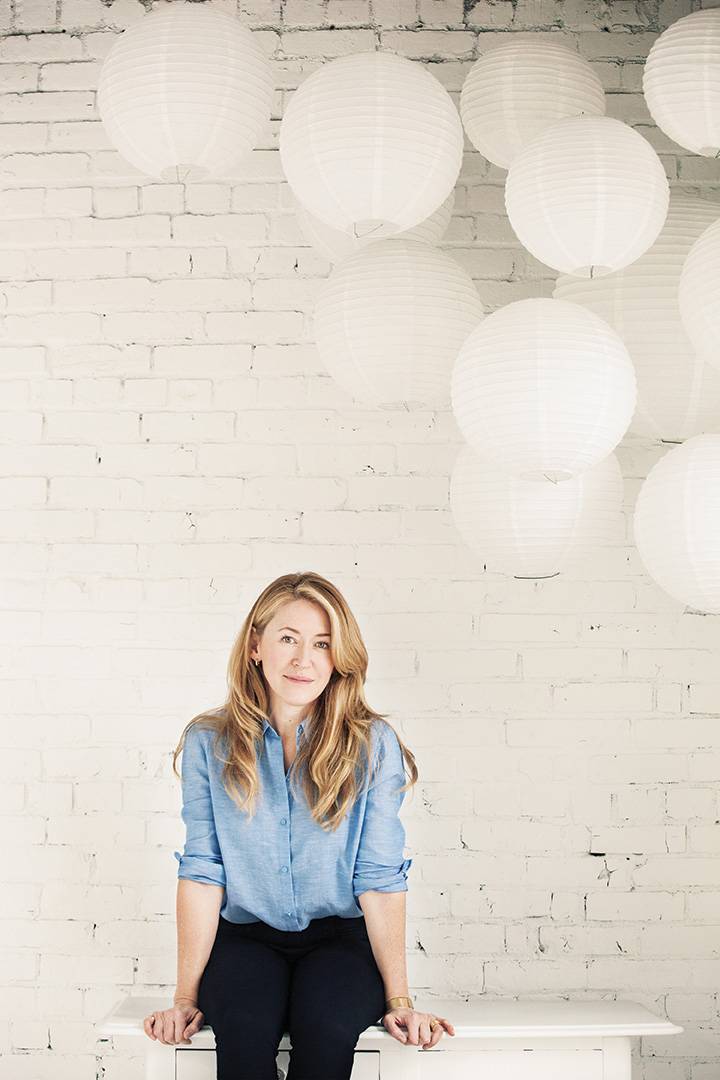 In a Fan Tan Alley studio, which photographer Kelly Brown describes as a “crisp, white canvas,” you’ll find one of Victoria’s best-kept secrets: Leslie Shewring, the internationally touted designer, stylist and photographer who is worshipped by décor bloggers for her unfailing sense of style.

It’s here, in this bright, airy studio, that Shewring designed her delicately patterned pastel fabrics for Cloud9, styled and shot many inspirational spreads for American crafting and décor magazines — as well as most of the images in her first book with Holly Becker, Decorate with Flowers, and sections of its follow-up, Decorate for a Party. Most recently, Shewring designed a line of dishware for Canadian Tire’s new CANVAS collection, which will launch this fall.

Even if you’re not part of the design world or a décor-blog devotee, chances are you’ve come into contact with Shewring through the retail goods and packaging she designs for large retailers, including fabrics and cushions and “loads of automotive accessory products for Target, Walmart, Costco, AutoZone and Canadian Tire.”

Shewring considers this side of her design output the “work work,” and while she continues to do some on the side, she lets her true esthetic shine with her other creative endeavours.
“The more anonymous design work I do for the mass retailers is utilitarian and not frivolous,” she says, “but my [personal]esthetic is really feminine, so I have this yin/yang happening in my life. The work that is associated with my name is very feminine, floral and beautiful. I think it was important to me to fulfill that aspect of myself.” 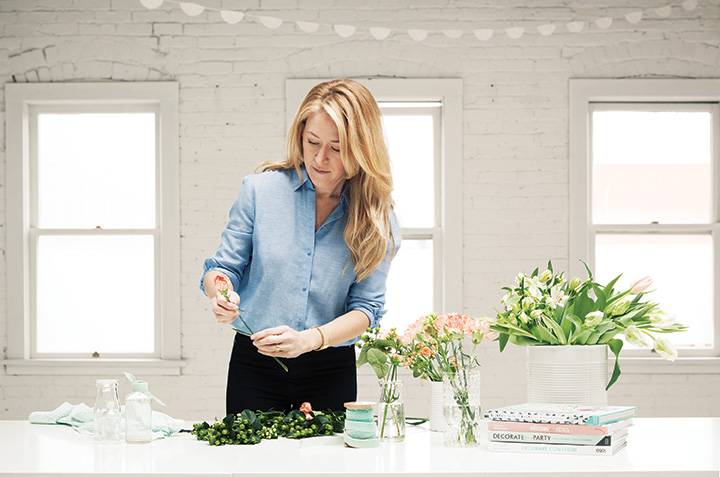 Daniela Cubelic, owner of Silk Road Tea, met Shewring when they were both at the University of Victoria as undergrads. Cubelic is excited for more people to discover her talented friend as Shewring develops a higher profile locally.

“She has an extraordinary sense of colour, light, balance and space,” Cubelic says. “If I’m looking at a photo she’s taken of flowers, I feel like I’m being transported to a serene moment in time, where the air is fresher and more rejuvenating, the colours are prettier than I realized they could be, the flowers are more beautiful and there’s a sense of harmony that underlies it all. To me, it feels like a kind of immersive visual poetry, and I feel instantly enriched and rejuvenated.”

Despite the creative freedom of designing under her own name, Shewring doesn’t enjoy the self-promotional aspects of “getting the work out there.” It would be easy for her to market to her 25,000-plus fans on Instagram — many who followed her over from her blog A Creative Mint — but instead, her feed is an inspiring mix of gorgeous photos of flowers and travel, things that she finds inspiring or calming. Frequent collaborator Holly Becker of the incredibly popular blog Decor8 believes Shewring’s disinclination toward publicity comes out of true modesty.

“Leslie is a free spirit, a true artist, who finds a lot of relaxation and joy from the process of being creative,” Becker says. “Self-promotion isn’t for her, mainly because she is modest and private, but also because that isn’t why she creates things. She doesn’t seek validation or ‘likes’ or to be praised for her work. She simply enjoys working on things that please her, that also give her an outlet for her ideas — it’s a release, a rush, for her to be able to get an idea out of her system, I believe. Then she can move on freely to the next idea, and so on.” 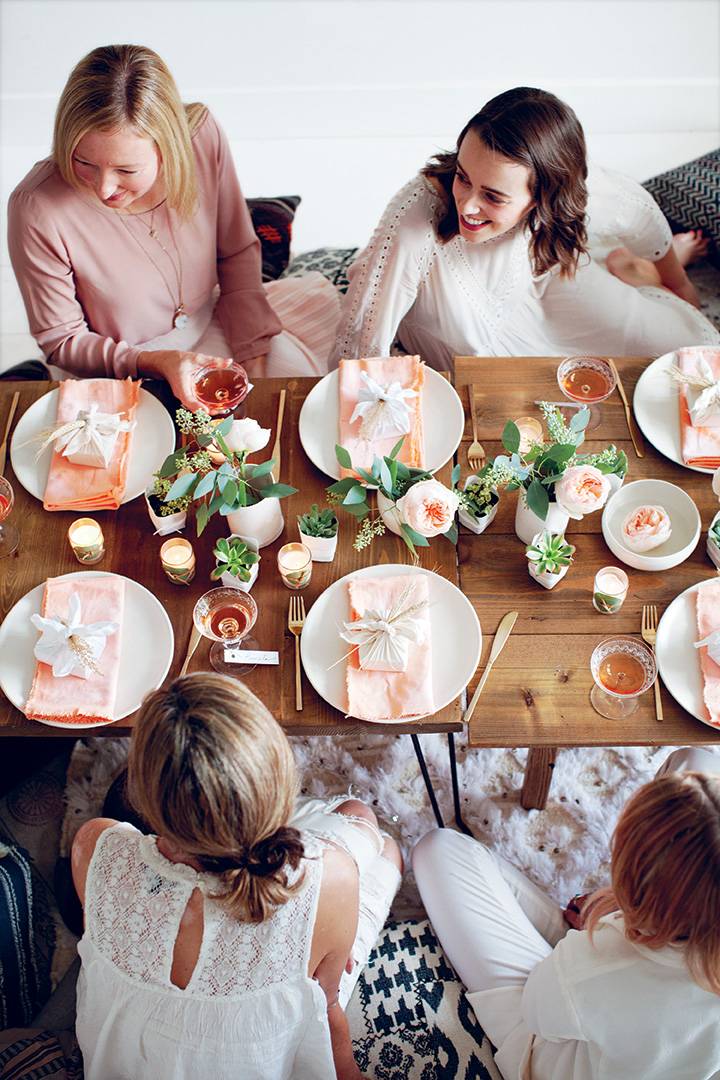 The “New and Romantic” theme in Decorate for a Party is recommended for a summer birthday party, a dinner with girlfriends or even a casual bridal shower. It uses a mix of organic materials and textures, and features wrapped succulents as décor and party favours, Furoshiki-wrapped gifts and handwritten drink tags on vintage glassware. Courtesy of Decorate for a Party c/o Jacqui Small, an imprint of The Quarto Group. 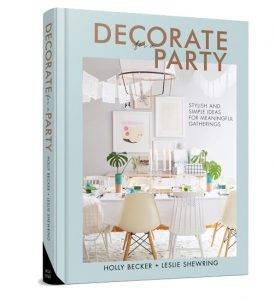 STYLISH IDEAS FOR MEANINGFUL GATHERINGS
When Shewring and Becker’s latest book, Decorate for a Party, came out this past fall, it launched in the U.K. with an elegant party at Anthropologie in London. It has since been published in five languages.

“It’s a collection of ideas on how to create personalized touches for parties,” Shewring says. “It’s not an overwhelming party book. It’s meant to be super basic for anyone who’s interested in doing little crafty things or personalizing a party or holiday in different ways.”

The book is divided into 10 sections covering a range of colour palettes and styles, from brights to moody, evening sparkle to forest picnic. Its themes can be used for gatherings of children or adults, including birthday parties, bridal showers, dinner parties, smaller crafting parties and a host of other occasions. 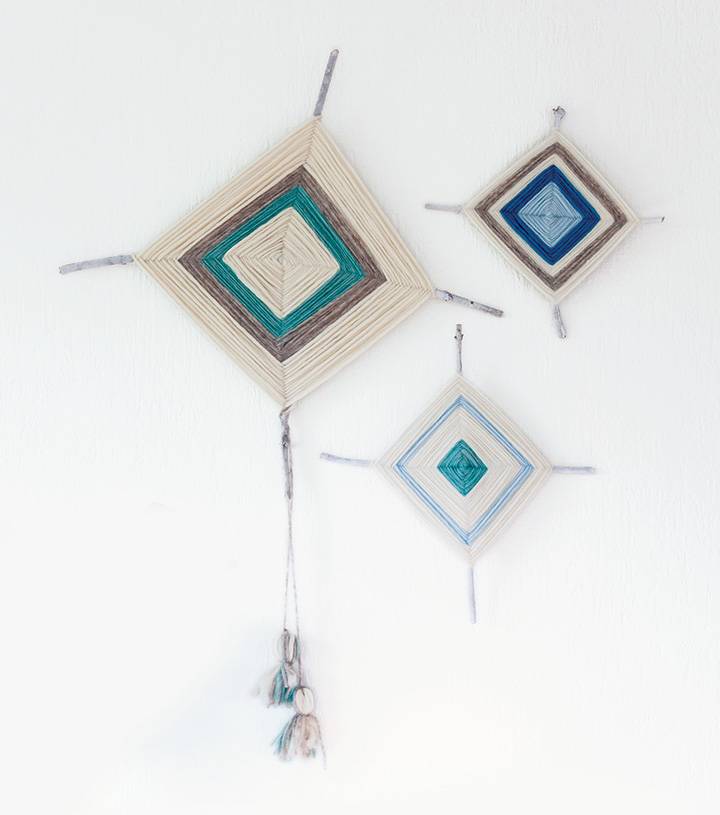 Courtesy of Decorate for a Party c/o Jacqui Small, an imprint of The Quarto Group

Add a personal touch to your next celebration with a DIY project, like an ojo de Dios, from Decorate for a Party by Leslie Shewring and Holly Becker. Find instructions to make here.

“There’s tons of huge, fabulous books on extravagant parties, but I feel that can be daunting,” she says. “People may use one of those for their wedding, but that’s about it. This book is about the little things you can do for dinner parties or little gestures for your guests.” While the enticing photographs in this book were created in Europe, L.A. and in Victoria, the bulk of the images in Shewring and Becker’s first book, Decorate with Flowers, were shot in Shewring’s Victoria studio, and in Vancouver. 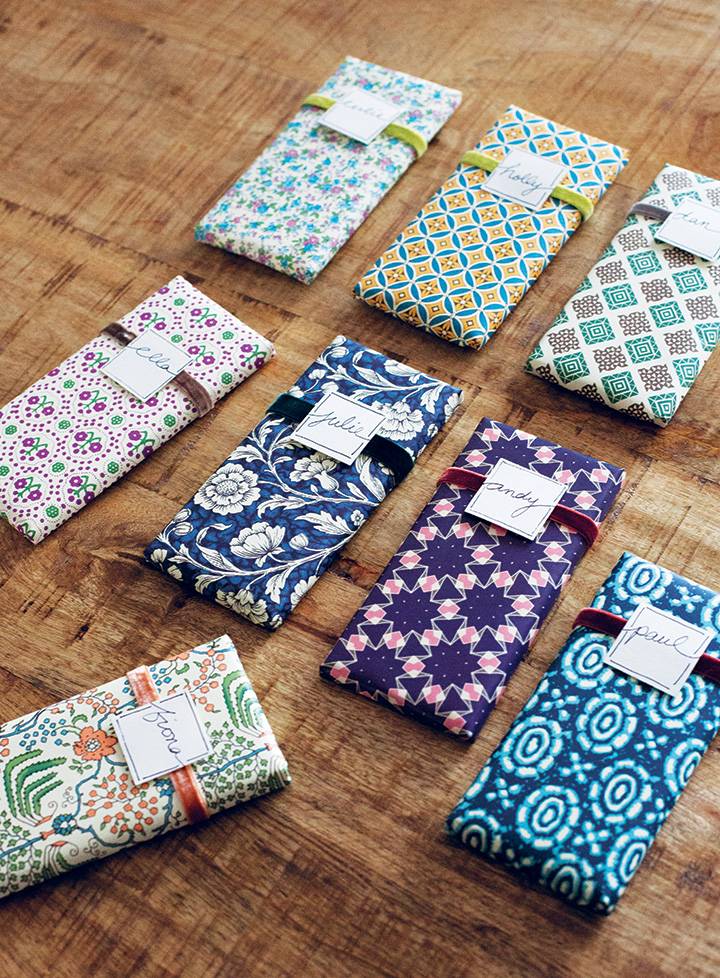 Add a personal touch to your next celebration witha DIY project from Decorate for a Party by Leslie Shewring and Holly Becker. For example, make edible place cards by rewrapping your favourite gourmet chocolate bars with pretty artisanal papers. Secure with a velvet ribbon and create name tags for the centre. Photo courtesy of Decorate for a Party c/o Jacqui Small, an imprint of The Quarto Group

“I did all the florals myself,” Shewring says. “My mom is an avid gardener so I grew up doing flowers for friends’ weddings. My mom, being an artist and a gardener, has always been an influence on me. That’s where I think the enduring interest in florals comes from because she grows the most insane floral varietals, like antique roses and super-beautiful poppies.”

THE PATH BACK TO VICTORIA
Her mother still lives in the same house in Deep Cove where Shewring grew up. While she realizes it seems strange now given her career path, she did an undergrad in Women’s Studies, now Gender Studies, at UVic.

“She came across as someone who already knew who she was, but was curious and interested in the world, and looking forward to learning and growing,” Cubelic says. “She has retained that positive attitude and approach.”

During her time as an undergrad, Shewring had a part-time job at the House Dressing Company in Sidney.

“I would stay there until really late at night doing all the displays in the windows, and that was my money during college, but I always really enjoyed it. I also ran their crafting workshops.”
This experience was one of the factors that led to her degree in interior design, but Shewring wanted to push it further. She went on to get a degree from the Southern California Institute of Architecture, which she describes as vigorous design training that gave a solid foundation in design concepts and problem-solving.

“It was a really-avant garde school, or at least it was at the time, and I kind of knew by the end that I wouldn’t practise traditional architecture,” Shewring says. “At that time, only 50 per cent of the class would go into traditional architecture. I went into product design …” Being interested in problem-solving in an esthetic way, Shewring became a successful product designer, creating goods and packaging for mass retailers. For years she was based in Los Angeles, where she also started her blog.

“In Los Angeles, there’s a huge, vital creative community, but it’s a huge spread-out city and it was very hard to get to places. And feeling isolated with little kids at home, I just started doing creative work at home and putting it up online,” Shewring says. Thus her blog was born. “A Creative Mint, the name, was a total whim. It was a place to store ideas. It had nothing to do with the colour.”

While her focus is now on Instagram, it is still a vault of ideas, a treasure trove of inspiration and colour for anyone looking for an imaginative spark. The decision to move back to Victoria in 2011 was prompted by Shewring re-evaluating her values and how she wanted to raise her children. Her father had passed away suddenly and she wanted to get back to a certain way of life and be closer to family. “I think sometimes when an event like that happens, it’s an opportunity to re-evaluate everything,” she says. 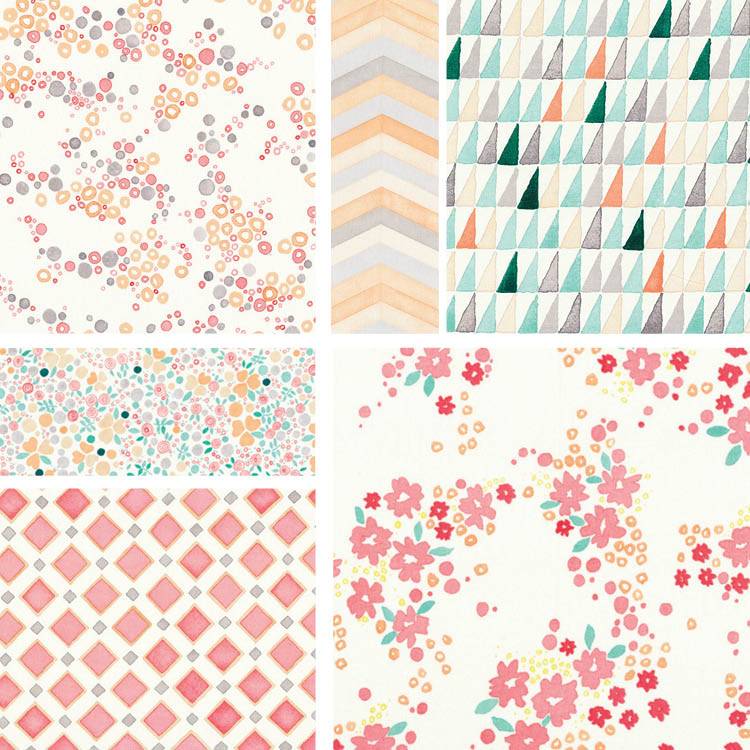 Shewring’s Palos Verdes collection for Cloud9 Fabrics was inspired by her time in California, and each pattern is named for a place in Palos Verdes. The fabrics were created by printing Shewring’s watercolours on an organic cotton voile. (Visit cloud9fabrics.com for retailers.)

CREATIVE COMMUNITIES
While much of Shewring’s sensibility stems from her mother’s art and florals, she also draws inspiration from her  mother’s Japanese heritage, with much of her design influences and interests coming from that culture. She visits Japan at least once a year, and has brought her children on recent trips.

“I’m always trying to challenge things for them, whether it be colour or the things we buy. Going to Japan, it’s so incredibly different there and there are so many opportunities for learning,” Shewring says. “Doing creative things for your children pushes you and then their response is amazing. They are super creative — all children are — and it’s pushing myself to provide creative opportunities for them, and in doing so you can feed yourself too.”

Shewring considers travel as creative “food” and makes a point of doing a solo trip once a year to spark her imagination. Using companies like Angela Ritchie’s Ace Camps, she ventures to unknown corners of the world to further her artistic skills. Trips have seen her styling with Dietlind Wolf in Gotland and doing photography workshops with Danish photographer Nick Heilvang in northern Sweden.

“Just the act of travelling and giving myself undivided time that is just focused on being creative is really helpful for me,” she says. “In daily life, you get so used to doing the same routine. I think for my process, I need something completely different. It’s going to these different places and working on photography or styling in a completely foreign setting. Once a year, that’s been my gift of time to myself.”

As much as she loves to travel, Victoria is home and provides its own inspiration. Moving back, she was excited to see how the city had evolved. “I have met a ton of creative people here, which has been refreshing and unexpected,” she says. “The concentration of people doing creative work is amazing.”

Her studio has become something of a community-building hub. In addition to hosting her own parties, she uses it as the base for many artistic workshops, including those by Moonrise Creative.

“A creative community is something I’ve been thinking a lot about lately, and it’s important to me,” Shewring says. “I’m seeing a lot of community in Victoria, with different opportunities to bring people out. Sharing creativity is how we thrive.”