At first glance, the futuristic home on Dallas Road in Victoria could be mistaken for a public building such as an embassy. A closer look reveals the structure is, in fact, a residential home with much in common with architecturally designed public spaces. 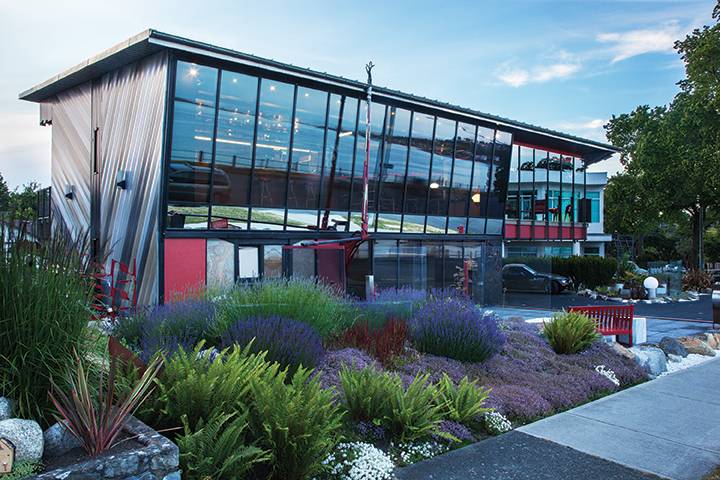 Forty tons of steel provides the skeleton for this two-storey structure. This house is heavy — about 100 tons, or 10 times heavier than the average wooden bungalow. The roof, made of stainless steel, is designed to endure for as long as 1,000 years. In fact, owner and designer Jim Knock notes that using stainless steel for the roof in his house was inspired by the roof of the Chrysler Building in New York City. 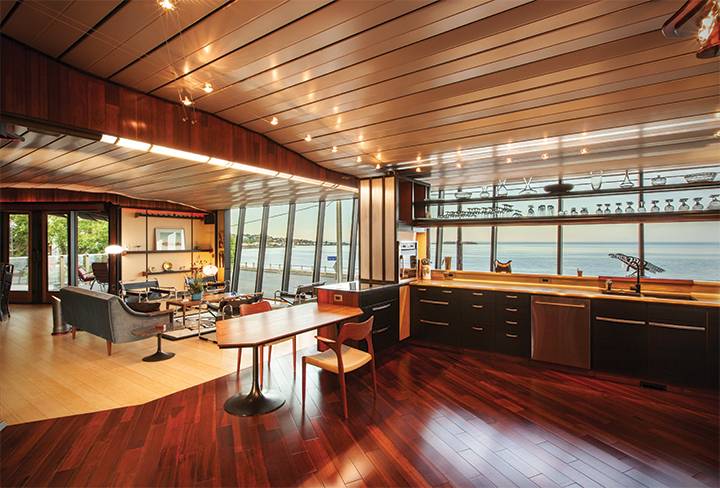 East-facing windows stretch from floor to ceiling across the front of the house, providing a stunning view across Dallas Road over the Strait of Juan de Fuca. The open concept was designed using no internal supporting walls so future layout changes will be easy and inexpensive. 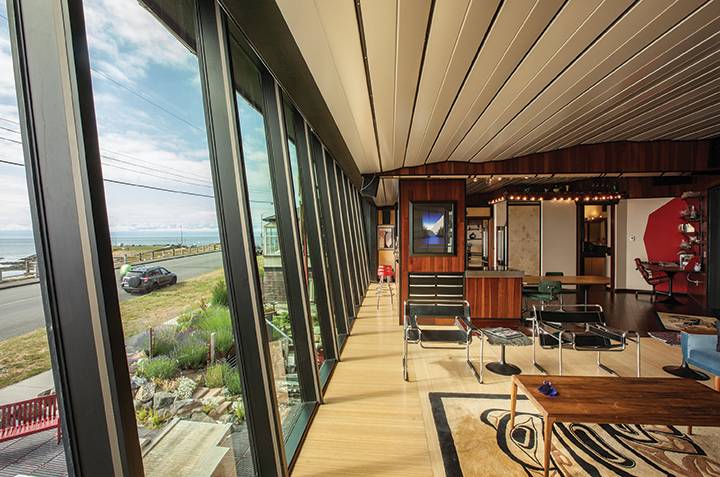 And speaking of New York City, when Jim visited the Big Apple several years ago, he took in the Empire State Building. Not surprisingly, he picked up a few ideas for the construction of his home. Today, he beams while noting that his home’s 22-inch-wide support beam weighs almost three tons and is larger than any beam used to build the American landmark. No, it doesn’t make his home a “wonder of the world” like the Empire State Building, but Jim hopes his “labour of love” will inspire others, far into the future, to build sustainably.

A lifetime of work in engineering systems and design fed Jim’s imagination as he envisioned and built his deceptively small but strong waterfront 2,836 square-foot home on just under 7,089 square feet of prime Victoria real estate.

Jim spent 15 years designing the “ideal” home environment, searching out ways to blend commercial-design concepts into the traditional model of residential construction. It took four years to build the home. “I wanted to build a home that would last, possibly for centuries — one that wouldn’t deteriorate in 30 or 40 years as most wooden houses do,” he says.

While Jim loves the details of construction, for his wife, Marian, the magnificent view is the most compelling feature of the home. “The view is ultimately what made me decide we’ll stay in this house after many years of travelling the globe,” says Marian.

Indeed, east-facing windows stretch from floor to ceiling across the front of the house, opening it to the sea light. But while Jim also appreciates the view, it’s clear that it’s the design that most excites him. “The windows are similar to the tempered-glass windows used in most tall buildings and skyscrapers,” he says. “Hence, it can survive strong weather changes easily, heavy winds and rains or an earthquake or tsunami. 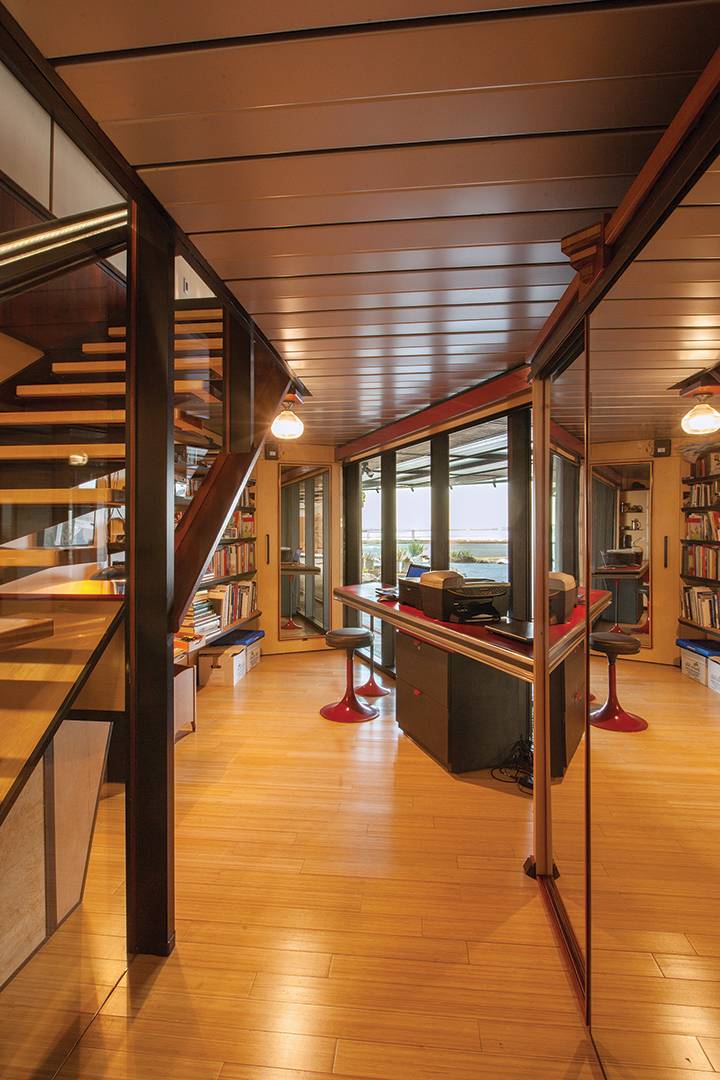 The homeowner’s first-floor office is just inside the carport. A guest room and bath are also on the first floor. Stairs lead up to the open-concept living room. 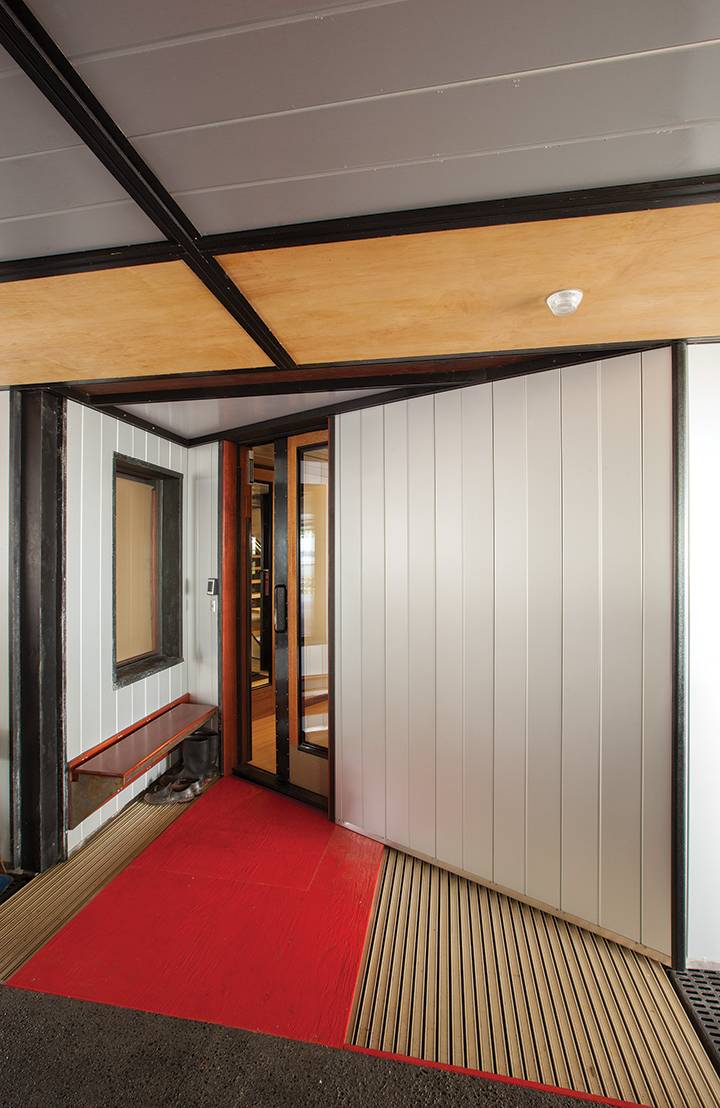 Wide sliding doors, reclaimed from the MacLaurin Building at the University of Victoria, are used throughout the home instead of swing doors, to allow for easier wheelchair access. An elevator shaft was also built in so that a lift can be installed if the stairs ever become difficult for the homeowners, allowing them to stay in their home longer.

“The design of the house exceeds any current standards for building construction in earthquake zones,” he claims. “Of course, a quake could cause things to fall, and possibly some large windows may become overstressed and shatter, but since the glass is tempered, it will not ever create any dangerous glass splinters that could harm people. There is no safer structure in Victoria.”

The exterior of the home, covered with factory-painted steel, stainless steel, aluminum and galvanized trim, stone and concrete, has been designed to handle the sea’s salt spray and the big winds. Wall thickness approaches nine inches, which Jim says “ensures no water will be trapped and cause a leaky-condo problem — and little energy is lost through the walls and the steel panels on the roof.”

And that Chrysler-esque roof? “The elements [on the coast] make our roofs one of the most corrosive sites on the planet, especially near the ocean,” Jim explains. “The roof is the most vulnerable part of a house. So I decided it had to be made of steel if it were to survive …” 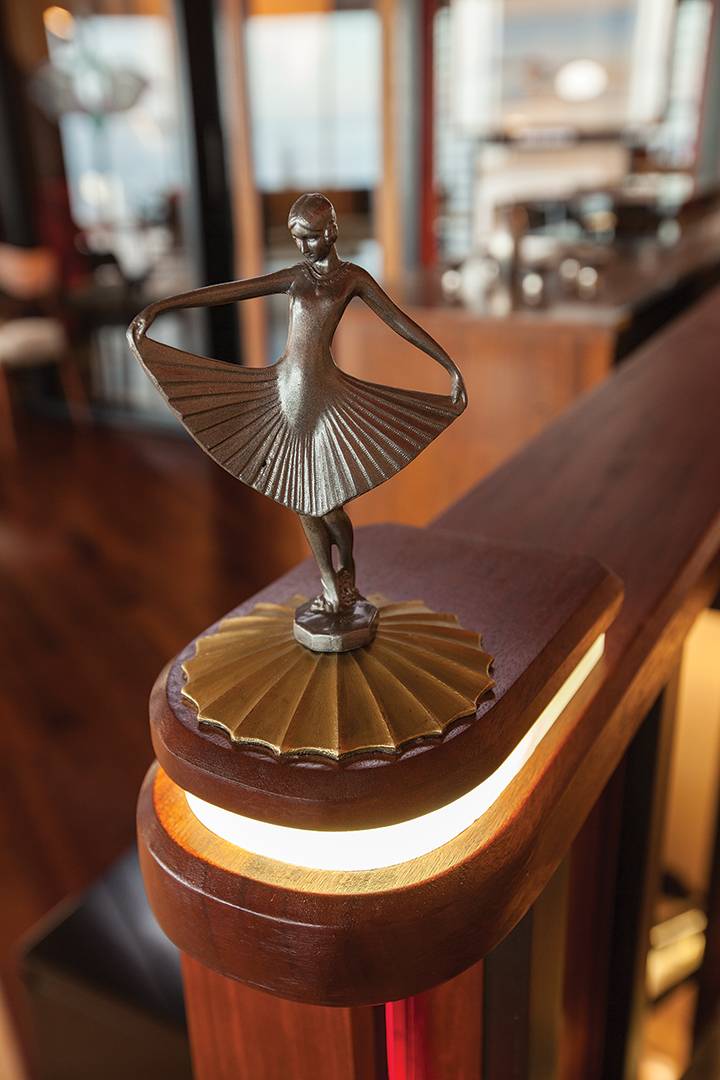 The dancer was found in a box at a local auction around 20 years ago. The homeowner cleaned away the paint and dirt and found a highly detailed lead art-deco figurine, which was probably created in the late 1920s or early 1930s. He had Waterglass Studios cast a bronze base for the figure, which was mounted at the top of the stairs. 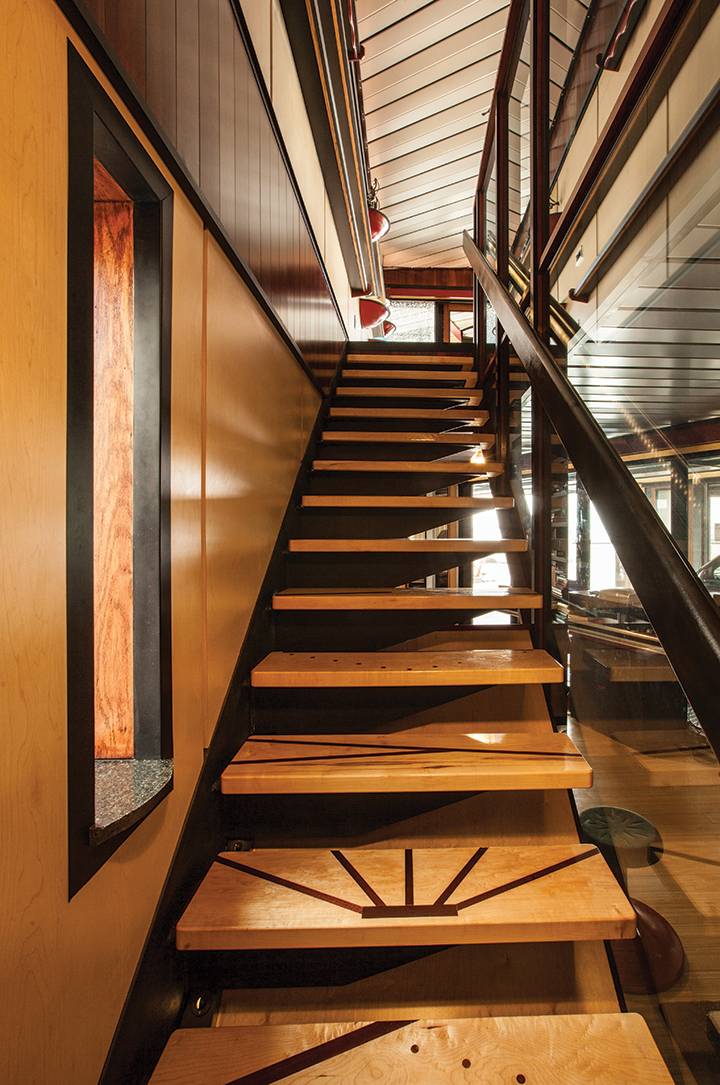 Each tread on the cantilevered staircase is unique, with a different inlay. The bannister features a distinctive leather covering. Reclaimed laminate floor panels have been used throughout the home, but as wall coverings.

The Reclaimed Home
“I see architecture as the most universal expression of the human need for an ability to create a positive personal environment,” says Jim. “It can be art made real and personal if done right.”

Durable bamboo and eucalyptus floors warm the huge space, as does the rich cherrywood flooring covering the walls. Laminate floor panels were also used to cover some walls in the living room and closets. The panels were originally custom-designed temporary doors used during construction of the new Royal Jubilee Hospital. 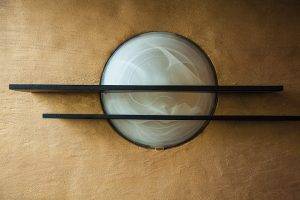 Reclaiming is part of the rich story of this home. For decades, Jim collected discarded materials from government surplus and auctions, knowing he would one day find a use for them. He gets a charge out of reusing or repurposing everything he can. That passion shows up throughout the house, including in a stunning “welcoming light” designed to suggest the moon, sun and clouds. The light’s glass came from ReStore. The base is an old wok cast into the massive concrete pillar that supports most of the front of the house. Two oak boards salvaged from the old Eaton’s store in the mid-80s are used to represent the clouds.

Throughout the home are sliding doors reclaimed from the MacLaurin Building at University of Victoria and bought through government surplus. “The doors had to be extensively reworked,” says Jim. However, because they are made from beautiful Honduras mahogany laminated over cedar, it was well worth the effort to bring them “back to life.”

In the bedroom, the headboard is made from reclaimed materials, including construction scraps, to create the feeling of mountains; and an LED floor lamp was made from a glass shade found by the roadside and a cooking pot and a spun-metal base, one of many purchased at a hotel-demolition sale. Spun metal bases are also featured on the coffee tables made from pieces of waste stone. 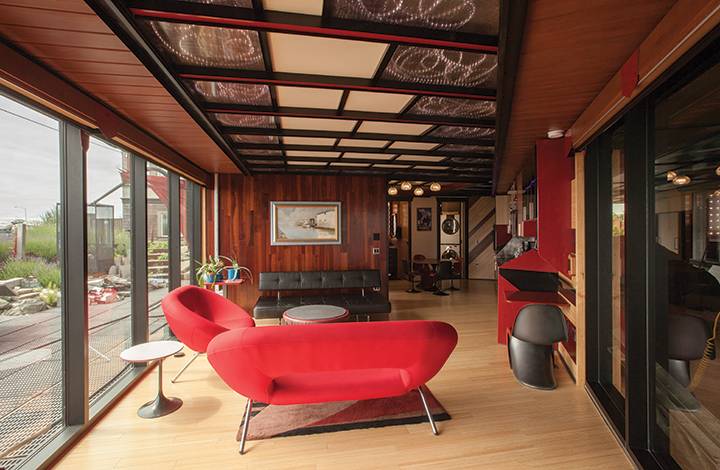 Looking to the future, the homeowner included a caregiver suite in the home’s design, so that he and his wife can age in the home they built.

Designed to Evolve
The home’s interior features an open concept with no internal supporting walls. According to Jim, it was designed so layout changes would be easy and inexpensive in the future. “Since we tend to ignore very predictable changes in our housing needs, we usually change homes many times during our personal journeys through life,” he says. However, he points out, a structure can be designed and built, as his home was, so that the house adjusts to the occupants rather than the reverse. This principle of the evolving home guided much of Jim’s design. Both he and Marian are fit and active now, but they are realistic about the future. Sliding doors provide ground-level entry to allow for wheelchair accessibility, should they ever require it. An elevator shaft was built in so that a lift can be installed if the stairs ever become difficult for the couple. “Everyone needs caregiving at the end of life,” says Jim, “so I included a [caregiver] suite for that purpose in the house design.” 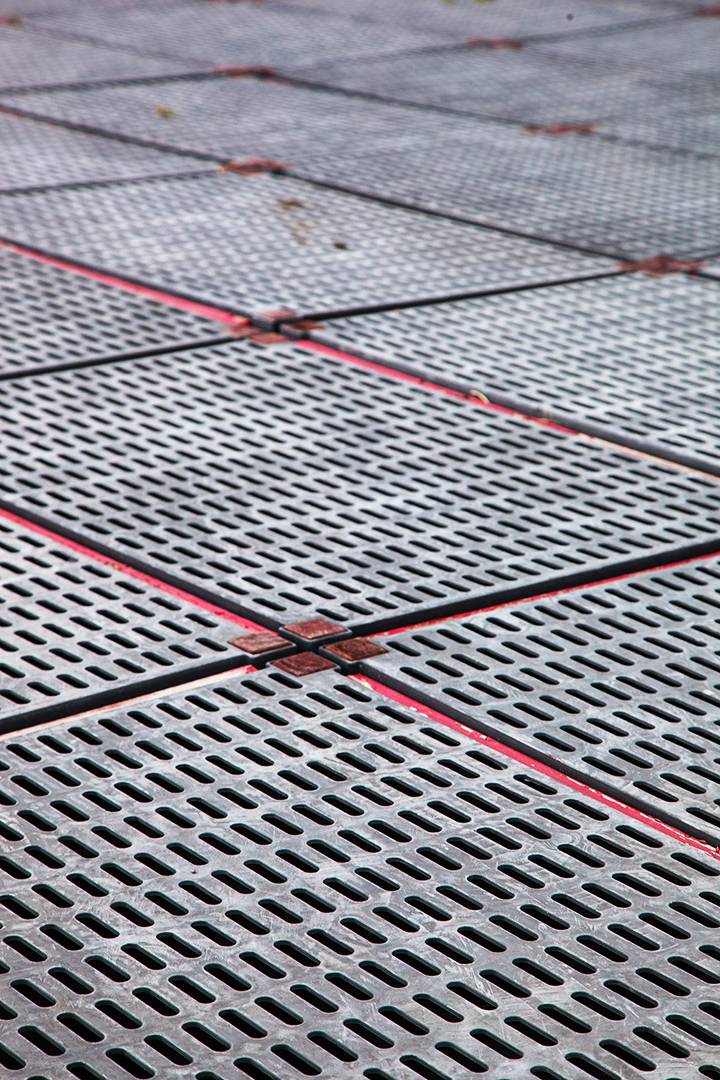 The home’s unusual exterior is covered with factory-painted steel, stainless steel, aluminum and galvanized trim, stone and concrete, and was designed to handle the sea’s salt spray and the big winds that can be experienced on Dallas Road. A large part of the yard is covered with a grid made of plastic shelving purchased from government surplus. The eavestrough, constructed from recycled material, collects rainwater and redirects it to the garden in front of the home. 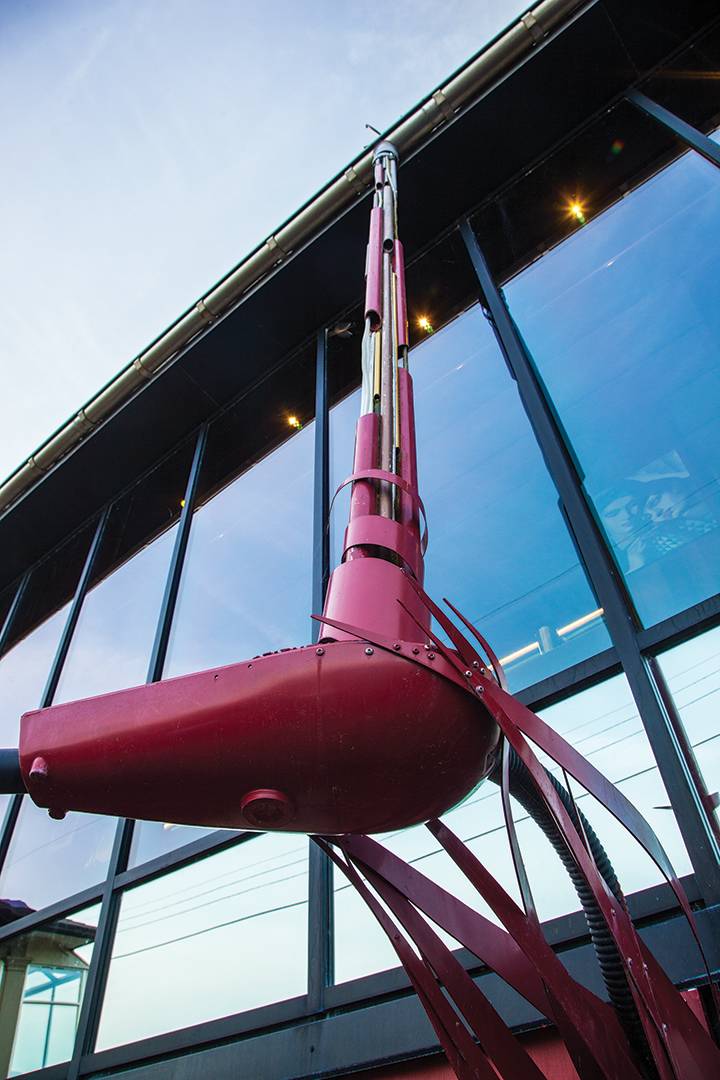 Ecological Thinking
Eco-friendly features are apparent throughout. For the front garden, Jim designed an efficient water-retention field, a priority for a guy who grew up on a farm on the Canadian prairie. The only eavestrough on the slightly sloping roof is a downspout crafted from scrap aluminum pipes. It carries rainwater down into a stainless steel tank (a hospital-discarded fume hood) that slowly releases the water to the water-retention field.

Just beneath the ground surface, the lot has been filled with porous rock that can store as much rainwater as would fill a small bedroom. “This equals dozens of water barrels,” says Jim, “and because of its location, the larger plants withdraw water as they need it — just like they would have before houses were built in the area.”

In addition, a large part of the yard is covered with a grid made of plastic shelving purchased from government surplus. Paved areas were punctured with decorative holes to ensure all rain enters the water-retention field.

A Home for Now and the Future
Housing experts like McGill architecture professor and author Avi Friedman have called for a housing revolution, suggesting “the rapid global changes of the 21st century are provoking an urgent priority to redesign residential environments.”

Using Friedman’s categories for this shift in home construction, the Knocks have built a home that scores well in sustainability values such as solar and water efficiency, green roof (solar panels), innovative landscaping, adaptable housing and more.

The house is undeniably a focal point in the Clover Point and Ross Bay area. Many passersby pause to observe and learn about the intriguing structure, some to critique it. “One man who admires it brought his daughter immediately from the airport to show her the house,” says Jim, chuckling.

He admits people either love it or hate it. A local woman who is loyal to Victorian home design stopped by and told Jim, “It’s the ugliest thing I’ve ever seen.” Jim takes it in stride, focusing instead on the satisfaction of having created his own vision of “the home of the future,” a prototype that may inspire future builders to think beyond wood and asphalt when setting out to construct new homes.

The house was recently added to a tour of historic houses in Victoria. Organizer Davyd McMinn says, “It is very exciting to have one of the most innovative, 21st-century-designed residences in the city in our historic home tour.”