Consider these 17 ingredients all staples if you want to prepare authentic Middle Eastern dishes at home. 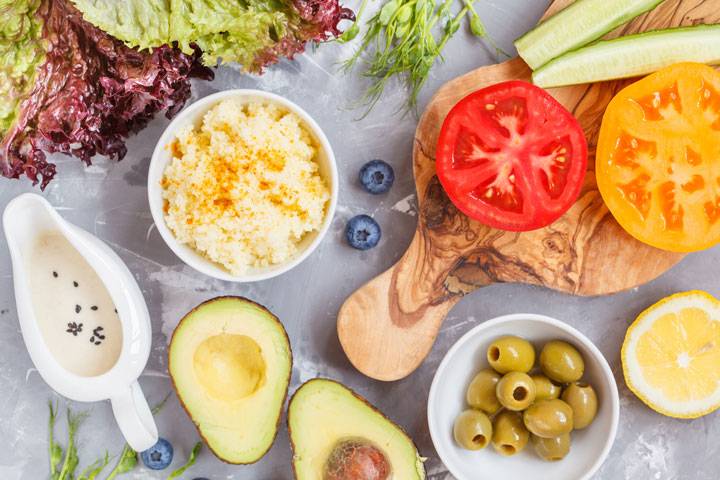 Aleppo pepper: The Aleppo pepper is a medium-hot, sweet chili that’s grown in Syria and Turkey, and is usually available dried in flakes.

Bulgur wheat: Bulgur is cracked whole wheat kernels that have been steamed and dried. Look for coarse-ground bulgur for pilafs and finer grinds for tabouli salad. It’s high in fibre and nutrition and has a nice nutty flavour.

Couscous: Couscous is a kind of small, grainy pasta made with semolina (you can find extra large pearls of Israeli couscous and coarse or fine instant couscous). It’s traditionally made by rolling semolina by hand over a fine sieve, suspended over a steamy pot of simmering stew, until small grains are formed.

Dates: Medjool dates are the fruit of the date palm, cultivated throughout the Middle East for millennia. Look for plump, glossy dried dates, a healthy sweet filled with fibre and nutrients.

Fig jam: You’ll find a lot of dried fruit featured in Middle Eastern recipes, but fig jam flavoured with anise seed is a unique product from Syria. Try a dollop on a crostini topped with fried halloumi cheese.

Halloumi: This unripened salty cheese has a high melting point, so it holds its shape and browns nicely when pan-fried or grilled. Serve as a starter, on toast, atop a salad or cut into fries — toss in flour and paprika and deep-fry.

Halva: This confection, made with ground sesame seeds (or other nuts) and sugar, is a caloric and dense sweet that’s eaten as a snack across the Middle East.

Harissa: A chili pepper paste made with cumin and garlic, harissa is served as a condiment or spicy addition to many dishes from Tunisia to Lebanon.

Labneh: Serve this thick, strained yogurt — like Middle Eastern cream cheese — alongside falafel and other dishes, or top with olive oil and za’atar and scoop up with pita bread.

Olives: Olives may be green, cracked, semi-ripe, black or sun-dried, but all are first salted, cured and fermented. Whole olives are better quality than pitted, and you don’t risk biting into a pit that’s been left behind. Try a variety — from Kalamata and Castelvetrano to Niçoise
and Moroccan.

Pomegranate molasses: In Iranian, Arabic, Lebanese and Turkish cooking, this unsweetened pomegranate syrup is made by reducing pomegranate juice. It’s added for an intense sweet and sour flavour. Try it brushed over meat for grilling, and in marinades, dressings and dips.

Preserved lemons: Look for jars of lemons preserved with salt, which add an intense and bright citrus flavour to tagines, stews and sauces.

Sumac: The ground, dried red berries of the sumac bush add a tangy, citrusy flavour to a variety of foods.

Tahini: This creamy sesame seed butter is the base for sauces and dressings (when combined with garlic and lemon juice) and an essential ingredient in hummus.

Za’atar: This classic spice blend, a combination of dried wild thyme (zahter), sumac, oregano, salt and sesame seeds, is used to season eggs and grilled meats. Try mixing it with olive oil to spread over grilled manoushi (a Lebanese, pizza-like flatbread) or use it as a dip with pita.