Call absinthe the drink of ill repute. Its reputation is the sum of decades of innuendo and rumour, unfairly cast but cemented all the same. What some saw as a mysterious, beguiling and enchanting spirit, others saw as a poisonous corruptor of souls. 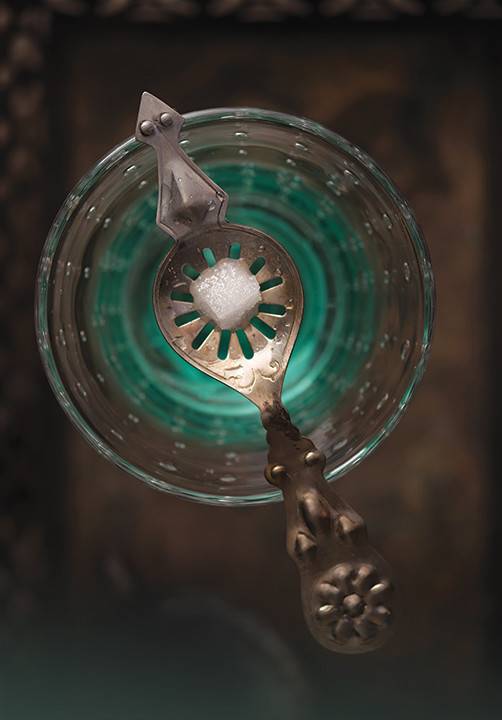 Absinthe’s history is clouded by misinformation, propaganda and outright lies. Popularized in France in the mid-19th century — though created in Switzerland in the 18th century — in many ways it was no different than other herb-based spirits of the time.

There was nothing especially unusual about the combination of anise- and fennel-based aromatics and accompanying herbs that flavoured it. It was perhaps only the addition of grand wormwood (artemisia absinthium) for bittering that ultimately sealed absinthe’s fate and led to its ban in many European countries and the U.S.

Wormwood had many uses before it became a key ingredient in absinthe. It was a bittering agent for brewing and it was known to have medicinal uses as well. It’s also poisonous. In large amounts, one of its components, thujone — also present in sage and oregano, among other aromatic herbs — can cause seizures and kidney failure.

All absinthes, however — even historic examples from the 19th century — don’t contain nearly enough thujone to cause any physiological issues. But just the suggestion that there was a “poisonous” or illicit ingredient in absinthe may have sullied its rep permanently, and inevitably made it much sought after.

“Anytime you have something that’s banned, people want access to it and stories grow out of that,” says Tyler Dyck, CEO of Okanagan Spirits Craft Distilleries, the first North American distiller to bring absinthe back — called Taboo — after the U.S. lifted its ban on the sale of the spirit in 2007. “There’s lore around it that it was banned because a gentleman killed his whole family [under the influence].”

It was outrageous folklore like this that helped impugn absinthe. It was said to cause psychosis and hallucinations and encourage all kinds of bad behaviour. But fear not, absinthe will not kill you, nor will it turn you into a killer. It will, however, rather pleasantly intoxicate you.
The amount of thujone present in absinthe is minimal. It doesn’t cause hallucinations, it has no special psychotropic properties, and you would die of alcohol poisoning long before the thujone would kill you if you decided to over-indulge in the name of spiritual exploration.

Absinthe, endearingly known as the “green fairy” for its chlorophyll-enhanced pale green colour, is a strong and delicious spirit with black licorice and herbal notes, but completely safe and harmless when enjoyed responsibly. 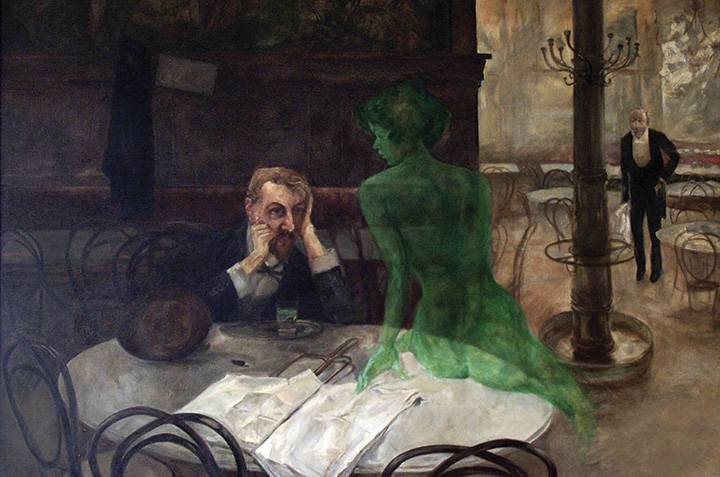 The Absinthe Drinker by Viktor Oliva, 1901

Thujone, as it turns out, was ultimately just the scapegoat for the resulting late-19th-century backlash against absinthe. Absinthe is stronger than most spirits, typically at 65%+ alcohol by volume, and became quite popular in France during a time when the wine industry was decimated by a vineyard-destroying pest called phylloxera.

“At the turn of the 19th century [absinthe] was gaining in popularity among the Impressionists, the poets and the artists at a time when the wine industry was taking a bit of a hit,” Dyck explains.

“With phylloxera knocking out a lot of the vines right at the same time as there was an uptick in absinthe consumption, it apparently led to lobbying by the vintners in the area to get it banned,” Dyck adds. “Even though it was banned on the auspice that it was potentially dangerous for individuals to drink, a lot of that has been proven to be quite wrong. It was more of a financial (or trying to keep the market share) ban, with the vintners screaming foul as they were losing market share.”

Following the lead of France and other European countries, the U.S. picked up the “evil thujone” narrative and forbid its sale in the U.S. in 1912, shortly before Prohibition shut down the entire (legal) alcoholic-beverage industry until its repeal in 1933.

Curiously, Canada never banned absinthe, but the spirit’s propaganda-sullied reputation quashed the market for the misunderstood beverage. Inferior “faux” absinthe from Eastern Europe, made with food colouring and distilled in nontraditional ways, was available in Canada, but it was harsh and bitter and a poor approximation of the vaunted green fairy.

Traditional absinthe is made from a fruit-based spirit, such as grape eau de vie, that botanicals such as grand wormwood, green anise and fennel have macerated in. This herb-infused spirit is redistilled to concentrate the aromatics and provide complexity. The result is a clear spirit in which additional botanicals such as hyssop, lemon balm and petite wormwood are steeped to add the signature chlorophyll green colour as well as additional herbal complexity. The spirit is cut with water to achieve the traditional strength before being bottled.

Properly made absinthe based on traditional recipes has made a strong comeback since legal barriers were lifted. Absinthe is once again being made in Switzerland, France, the U.S. and even right here on Vancouver Island. Nanaimo’s Arbutus Distillery recently introduced its Baba Yaga Absinthe, which is made with botanicals grown in the distillery’s garden. “With Baba Yaga, I wanted to make an absinthe that was well rounded and not overbearing in any one direction and, of course, make it genuine,” says Arbutus owner/distiller Michael Pizzitelli.

“It’s heavy in anise but not cloyingly so. This allows one to pick out the other herbs hanging out in the background, like mint, lemon balm and the wormwood with its bitter herbal notes.”

Because absinthe out of the bottle is stronger than most spirits, it is meant to be diluted with ice water (see the sidebar “Conjuring the Green Fairy”). This not only creates the louche effect, where the clear pale-green liquor becomes opaque, but also frees the aromatic oils and smooths out the heat of the alcohol. The ritual of preparing it can be complex and elegant, like the French method, with ice water slowly dripped over a sugar cube (to tame the spirit’s bitterness) into a proper absinthe glass, but it doesn’t have to be.

“I usually recommend a somewhat lazy approach to start: simply pour an ounce [of absinthe] over a few cubes of ice and be patient,” says Pizzitelli. “As the ice melts — moderate stirring will speed this up — the spirit will louche and from there simply sip and find a dilution point with which you are happy.”

Like other anise-based spirits, absinthe is also wonderful in cocktails. In fact, many classic pre-Prohibition cocktails, such as the Sazerac, Corpse Reviver No. 2 and Monkey Gland, were made using absinthe. Ernest Hemingway was known to enjoy a jigger of absinthe poured into a champagne flute and topped up with iced Champagne until the absinthe clouds, a drink known as Death in the Afternoon.

“Absinthe’s potency in flavour and aroma makes it quite useful behind the bar,” Pizzitelli confirms. “A small — say, 1/4 ounce — addition to a cocktail preparation or even just a glass rinse with absinthe will contribute noticeable hints of black licorice and herbal tones, which can add depth and complexity to drinks. Other spirits used in the same manner would be lost, but absinthe is so concentrated that it will [shine] through even in small amounts.”

It’s safe to say that in the 10 years since traditionally made absinthe returned to the market in the U.S. and began production here in B.C., we have seen no evidence that it is anything more than an enchanting but misunderstood spirit about which many yarns have been spun. These stories certainly enhance its mystique, but today we can see them for what they are: fairy tales.

Absinthe’s appeal is as much about the optics and the ceremony of preparing it as the spirit itself. The French method, as it is known, is a simple transformative ritual that brings out all of absinthe’s best qualities and provides a visual feast for the eyes.

It all begins with the glassware. An absinthe glass is elegant and fine, with a demarcated dose line for the absinthe and another indicator for the proper amount of water (which typically equates to one part absinthe to three or four parts distilled water). Absinthe goes in the glass first. An absinthe “spoon,” which is actually flat, slotted and ornate, is set across the rim of the glass and a sugar cube is perched over the slots. Ice-cold water is then dripped onto the ice cube to slowly dissolve it into the absinthe. The sugar provides a contrast to the bitterness in the absinthe, though some would argue it’s not mandatory. (And no, the traditional French method does not involve lighting the sugar cube or absinthe on fire.)

The real magic occurs when, as the water is dripped into the clear, pale-green absinthe, the spirit begins to cloud, as the oils in certain botanicals (mainly anise and fennel) come out and turn it a delicate milky green colour. The addition of water also releases the potent aromatics and subtle flavours (much as water in whisky does) as the absinthe is diluted to a suitably enjoyable potency. Behold the intoxicating green fairy that’s captured the imaginations of absinthe drinkers for centuries.

Absinthe Frappé
A spin on a classic — absinthe and fresh mint with egg white. Herbaceous and silky smooth.
• 1 1/2 oz Arbutus Baba Yaga Absinthe
• 6-8 mint leaves
• 1/2 oz simple syrup
• 1 egg white
Start off by clapping the mint in the palm of your hands to release the oils, then add to a shaker. If you want some serious mint flavour, you can blender-muddle it. Place absinthe and simple syrup on top of the mint in the shaker and finally add the egg white. Dry-shake vigorously. Add ice and shake again. Double strain into an absinthe glass and serve with a mint-leaf garnish. (Courtesy of Matthew Hattersley, bartender at Arbutus Lounge)