Farmers like Hanahlie Beise are raising alpacas, llamas and sheep to make yarn from their coats, creating high-quality, slow-fashion products with a distinct B.C. edge. 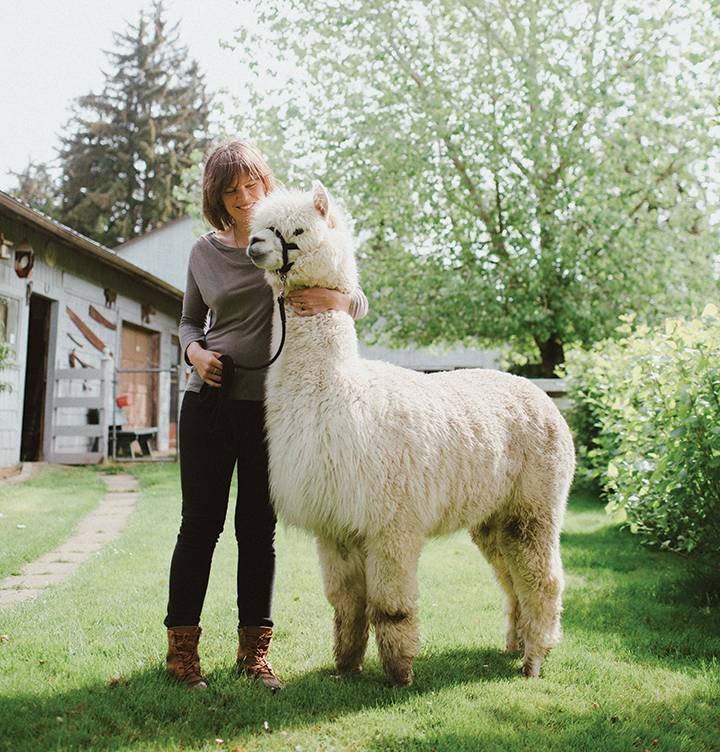 The alpaca’s mouth hung open as if he had stopped, mid-yawn, to show the world his teeth. “He just spat at somebody and doesn’t like the taste in his mouth,” says the alpaca’s owner Hanahlie Beise, as we leaned against the fence at Hinterland Farm on Pender Island, feeding handfuls of molasses-covered oats to a herd of long-necked, sweet-faced camelids. On cue, the alpaca spits again, aiming bile and disdain in the general direction of a group of spear-eared brethren crowding for treats. With three stomachs and captivating, triangular faces, alpacas make for curious creatures — they’re docile, fairly low maintenance, and social without being demanding. They also grow an incredible fleece that Beise turns into undyed yarn with earthy names like maple, dusk and ash.

Plunging a hand into freshly shorn alpaca fleece is hard to describe. It looks like it might be slightly coarse, its unwashed bulk rife with dirt — the natural outcome of farm living. But upon first touch it’s soft, barely there, like it’s already been processed and not simply trimmed from the body that produced it. There’s a weightlessness to it, and because there’s no lanolin, a naturally produced wax found in sheep’s wool, there’s a lack of smell that belies

its zoological roots. It’s also hypoallergenic, waterproof and fire resistant, but mostly it’s the luxury of the stuff that knitters love. Given that it evolved to keep these mammals warm in the cold, unforgiving mountain ranges of South America, it’s not a surprise that it’s been spun into yarn and woven into garments and textile art for thousands of years.

“The best part of making hand-knit garments is that they are one of a kind and unique to your body,” says Beise, who co-owns Hinterland Farm with her husband, Caleb Beyers, where she creates its eponymous yarns and patterns.

“That’s why I started knitting; I wanted to make things that I couldn’t find or buy. I think it also depends on the person, but in my opinion something that’s well-knit in beautiful yarn would be a piece of clothing that was very special to me.”

Ungulates have long been raised for the wool that grows from their bodies — sheep, llamas, goats and alpacas are the most common — and on Vancouver Island and the nearby Gulf Islands, small herds of these cloven-hoofed mammals contribute to a local economy
of high-quality yarns spun from their fleece.

Much like the slow-food movement, there’s been an upswing of interest in knitting and weaving of all kinds in the past decade, and the availability of online tutorials, patterns and fibre sales has allowed for easy growth. 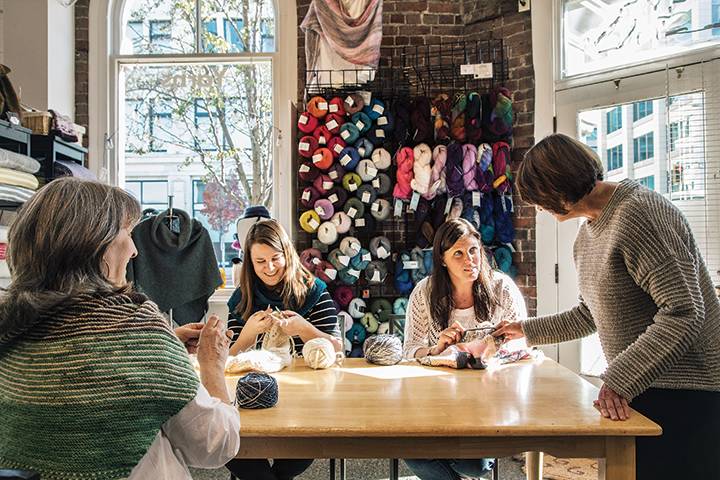 “The whole slow [fashion] thing is appreciated; it’s a very low-tech skill in a very high-tech world, and frankly people need that,” says Valerie Huggett, owner of the Beehive Wool Shop in downtown Victoria. “They need a way of relaxing, of completing something on their own because a lot of the jobs out there now are kind of a cog-in-a-wheel type of thing, and they don’t see a finished product.”

Huggett says the yarn business is thriving, with more than a million metres of yarn being sold at the Beehive each year. She also points out that committed knitters know to factor their yarn supply into healthy entertainment budgets — that is, it isn’t an inexpensive calling. With an average skein of good quality yarn priced at around $15 (Hinterland yarns average $25) and up to 10 skeins needed to knit an adult-sized sweater, knitting projects add up quickly. While her customer base spans the ages of eight to 80, Huggett has seen heightened interest from people in their 20s and 30s, which feeds well into a business like Beise’s.

At Hinterland, Beise’s husband has learned to shear the alpacas and llamas, and she buys other fibres — like Rambouillet sheep wool — from fellow farmers to create various blends with her own supply. After sorting by colour of fleece — animals typically fall into the white, brown or grey colour spectrum — she send the fibres to a mill to be washed, picked, carded and spun using traditional techniques.

“I think consumers now want to know and understand where things are coming from, and they want to have a connection to the person who made it,” continues Beise. “The story is a big part of it. People care that the yarn that they are using is from happy animals who are loved. That might sound cheesy, but I really think that’s true.” 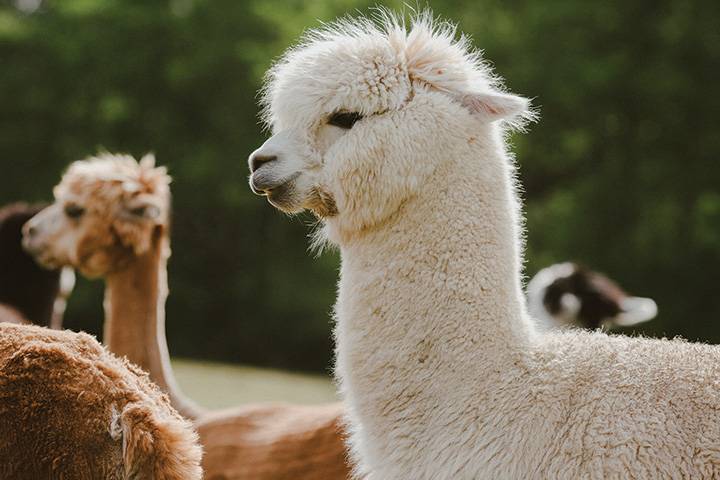 Hinterland Farm can be found after a bend of green conifers on Pender Island, its pastures sprinkled with 18 doe-eyed alpacas and three llamas. Beise and her husband moved there in the summer of 2018 after a few years of boarding their animals in Sooke while living in Victoria.

The former photographer and graphic artist, respectively, have been taking giant steps away from the big cities they’ve loved to build the life that was calling. Though originally from Vancouver Island, Beise and Beyers lived in Brooklyn, New York before moving to Vancouver, then Victoria. The move to Pender was next, when they found a pretty acreage where they could house their herd, two energetic dogs, and 43 Luchin heritage hens, who lay small cream and blue eggs in the salal near their log cabin.

Beise is a committed fibre devotee, and her Hinterland wool and patterns are popular with the knitting set. Her skills as a photographer are visible on her Instagram feed, where she posts inviting, rustic shots of her knitwear and patterns, along with captures of farm life and the comically cute alpacas.

Beise is well-matched to the life she’s chosen. Dressed in solid boots and a well-loved, cinnamon- coloured sweater of her own making, she and Beyers are tackling various infrastructure projects themselves, renovating a log cabin and clearing sections of land to better organize the pasture land available to the herd.

They’ve been collecting and rescuing alpacas and llamas from local farms for seven years, often because they’ve been neglected by folks who initially got them as lawn ornaments. Hiking around the rugged pastures and barely there paths connecting a number of projects on the eight acres she now owns, she is sure-footed, calm and happy to be around her beasts. In an outbuilding, she pulls out bags of the yarn that she sells at fibre markets, festivals and online. Like the fleece, it is surprisingly soft and gently coloured. She gestures to a stack of enormous dye pots and long, dried strips of eucalyptus bark — a natural yellow dye source — sitting outside of a shed. When she can, she dyes her own wool, though she doesn’t yet sell it, and will continue to educate herself and others on the process of natural dyes through Hinterland’s Colour in the Cauldron series, which focuses on the traditional dyeing methods of artisans from Oaxaca, Mexico.

The fibre and textile world is one that’s populated with guilds and festivals — it’s a subculture that proudly preserves traditions and various cultural techniques that can be applied in the here and now. And while there have been advancements in technology and an expansion of market, the steps that unfold between sheep and sweater are the same as they’ve always been. 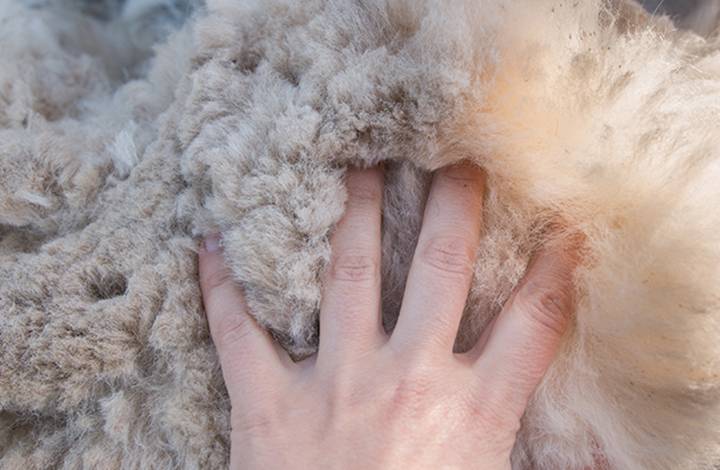 There’s the shearing — a labour of love that involves clipping pounds of fleece off a live, squirmy animal, followed by the washing, which removes excess dirt and lanolin. After that the fibre is dyed, then carded to align the fibres into a more recognizable batting. From there it is spun into yarn of varying thickness and the felting, knitting, crocheting, bobbin lacing, basketry, braiding, spinning and weaving can begin. For knitters like Michele Page of Cobble Hill, the processes involved in getting to the yarn are a valued part of the experience.

“I have to admit my frugal personality prompted me to start buying raw fleece from local farmers, carding it, dyeing it, spinning and then either knitting or weaving it into garments and accessories,” says Pace, who helps coordinate the Cowichan Valley Fleece and Fibre Festival — the oldest fibre fair on Vancouver Island, where vendors share their hand-dyed, hand-spun yarn, rovings, knitted fashion, fleece, felting and woven goods each October. “It still is magic to see a pile of raw wool turn into a vibrantly coloured sweater.”

As the chill of winter sets in, Hinterland’s alpacas’ coats are growing thicker and longer, ready to protect against the cold. Those same fleeces will do the same for humans once they’re sheared and processed in the spring. It’s a sharing of resources that’s mutually beneficial — a rare occasion where supply stays in perfect harmony with demand, and the outcome is well worth the wait.