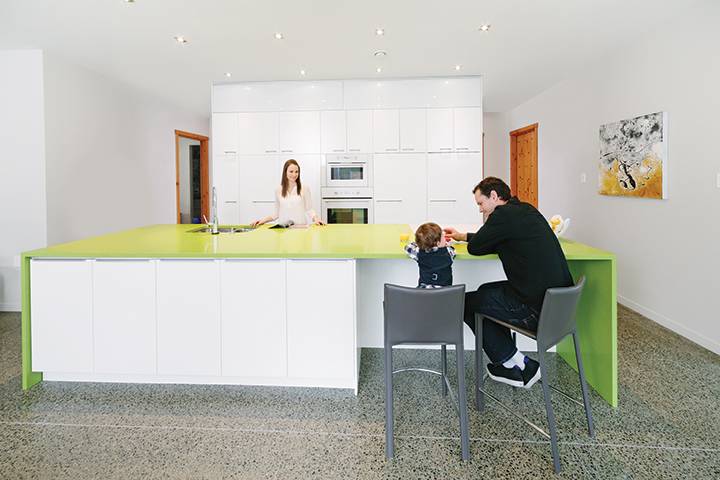 The fun green countertop is Silestone, made from natural quartz, which makes it extremely hard and resistant. The wall of cabinets serves as the pantry and also houses an appliance garage.

Damon Gray knows how to build a house. He knows how to fix them too, having renovated traditional wood-frame homes on the Saanich Peninsula these past eight years with his company, NZ Builders Ltd.

But when it came time for Gray to build his own home, he asked himself which he would prefer: pay through the nose to heat a traditional sieve-like wood-frame home, and have to renovate said home every few decades to keep it from falling apart? Or build an airtight sun-catcher that never breaks down and costs about 50 bucks a month to heat?

It should probably be framed more as a way of knowing rather than a choice, per se. Having worked in the building trade since he was 16 (training begins in high school in his native New Zealand), Gray brings a wealth of experience to his work despite only being in his early 30s. He also brings what he feels is a better way of building. 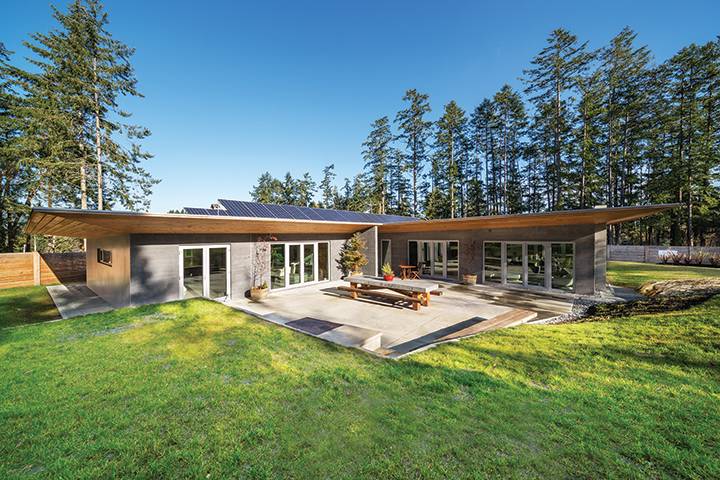 Set In Concrete
The better way is concrete. Unlike Canadians, New Zealanders have figured out that a wood frame isn’t well suited to harsh or humid climates, and therefore have long been fans of concrete elements in residential construction.

For his own sturdy, energy-efficient home, Gray used a sandwich-like building method that saw him essentially pouring wide concrete slabs, tilting them up, adding a layer of insulation, and backing it with another slab of concrete, over and over and over. And boom … better thermal mass, less fluctuation in temperatures, fewer exterior details that permit water egress, and ridiculously easy to maintain.

The sandwich walls offer much improved insulation, says Gray, because there are so few points at which heat can escape. Typical escape points — studs, for example, in a wood-frame home — are called thermal bridges, and that’s where a significant amount of heat is lost. In addition to its superior insulatory properties, concrete tilt-up also puts rot, fire and mold issues squarely in your rear-view mirror.

Sustainability Meets Beauty
You might think a house constructed of concrete — especially one that runs nearly off the grid — would be ugly. But you would be wrong. “To be super efficient you’d have a square box with windows on the south side and that’s it,” says Gray. “But I didn’t want to compromise style.” He wanted to create a beautiful space for his young family — one that not only had a much lower energy footprint than many traditional houses, but was also a work of art.

While some of the concrete siding panels were left smooth, others bear the impression of wide cedar planks, offering texture and visual interest. Gray used those same cedar planks to create broad, beautiful soffits that both shade the home and boost its aesthetic appeal. The eavestroughs are extra-wide to make cleaning easy, and are semi-cylindrical in shape, which allows sediments to settle out and keeps the water clean. While Gray’s home uses municipal water, he is currently considering closing the loop with a tank system fed by runoff. 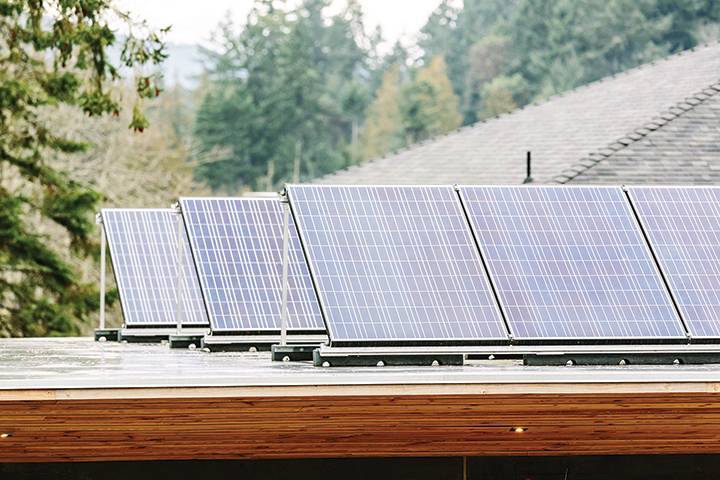 The flat roof has 51 solar panels, and the house was oriented on the property to take maximum advantage of the sun’s energy. Any excess power generated is fed into the local grid.

Capturing the Sun
Passive solar design capitalizes on siting for maximum sunshine and captures sun with 51 solar panels. It also cuts the family’s heating bill by 30%. While geothermal and solar come in at the same cost, geothermal only affords a 30% savings, where passive solar gives a savings of 50% and doesn’t require the replacement of a $10,000 heat pump.

“It only takes about three hours of sun to warm the house for the day,” says Gray. “If you can take demand off your utilities, that’s the greenest thing you can do. It’s better than saying I’ve got a recycled bamboo floor.”

While Gray agrees solar photovoltaic (PV) cells are higher polluters overall, given that their life cycle is many decades longer than, say, a heat pump (which requires replacing every seven to 10 years), they come out as a greener choice. The solar panels will last a lifetime: while their life span advertises 30 years, at that age Gray says they’re still cranking out 80 per cent of the energy of their younger years. If you want to complete the circle, you can even take your solar cells with you when you move. 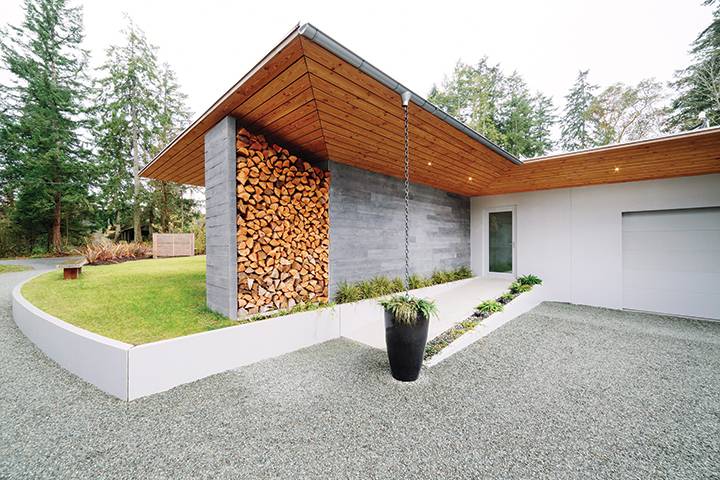 Recognizing that his preferred bungalow design created a long spread rather than a square one, Gray made up for the loss of energy efficiency by adding more solar panels to the flat roof. The home’s roof is thermoplastic polyolefin (TPO), a commercially popular roofing material due to its reflectivity and its resistance to ultraviolet, ozone and chemical exposure.

Water draining from the roof is actually potable, which isn’t the case with traditional torch-on roofing materials. The driveway is landscaped with permeable material that drains straight back into the water table.

The south patio is bounded on two sides by the house, creating a courtyard effect. A funky wood-topped concrete barbecue table forms the centrepiece of the outdoor living space, providing ample seating for people to enjoy a meal or a late-night gathering around the fire pit.

“It’s so massive I ended up putting it on castors,” laughs Gray. “But you still need a rugby team to move it around.” 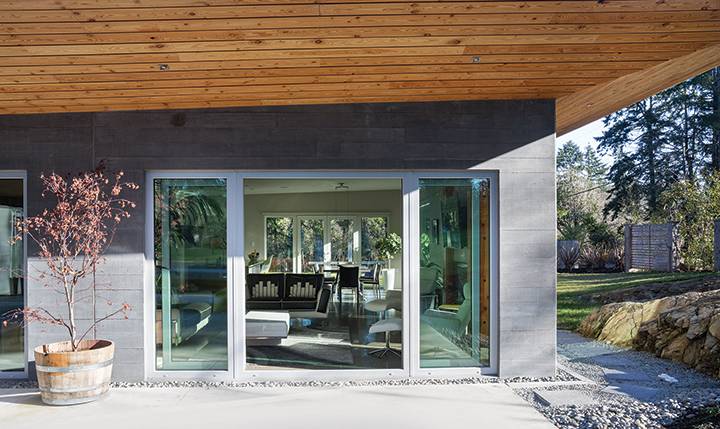 Room to Grow
With an interior that measures 2,800 square feet, the home offers two distinct residences: one for Gray’s young family of four, and a secondary suite, which is used as a games room but could potentially be converted to rent or used for in-laws.

All living areas are bathed in natural light from the floor-to-ceiling windows. The primary kitchen is open, airy, and big enough to have your 40 best friends over for supper, and is surrounded by the main living space.

In the second kitchen, leftover slabs from the walls became the countertops; red brick that was salvaged from the dump grew into gorgeous textured walls. All the wood in the home was sourced on the half-acre property, from the beautiful cedar soffits to the pine features adorning the interior doors to the counter edgings.

Gray embraced every possible way to make the house sustainable, from the low-flow faucets and toilets to thicker insulation to siting the home properly to take maximum advantage of the sun’s energy.

“House orientation and more insulation — done correctly — is your cheapest and most reliable investment toward lowering your heating bill,” he says.

Under-slab insulation is R40; roof is R60; the walls are blanket-wrap insulated; the triple-glazed, high-solar-gain windows are ThermoPlus fibreglass with low air leakage. The in-floor heating system is small and robust, with everything being designed to last a lifetime. 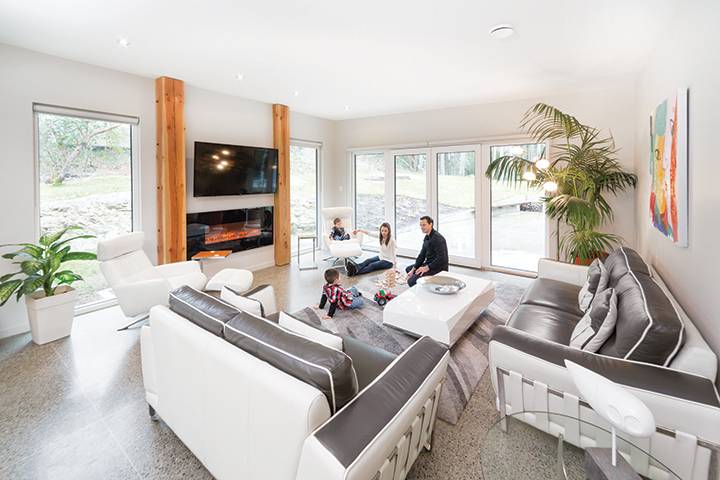 The open-concept living room provides a light-infused sanctuary for Damon, his wife Annie and their two young children. Stone aggregates in the polished concrete floor (which extends throughout the home) give it colour variation and add visual interest. 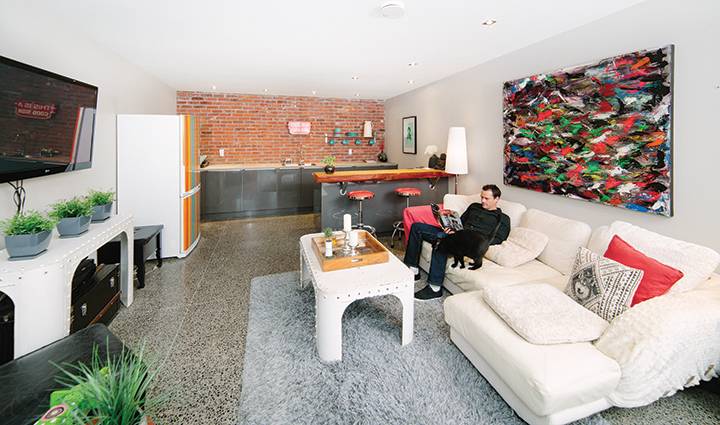 Recycled bricks, from a demolished property on Yates Street, form the wall behind the wet bar in the games room.

Paying It Forward
With the tremendous reduction in energy afforded by the home’s design, Gray actually received credits from BC Hydro for his energy consumption last summer. He estimates his monthly energy bills to be between $50 and $70, averaged across the year, as consumption is higher in winter. After the solar panels feed the toaster, dishwasher, lights and laptops, any excess power is used to turn back the power meter.

“After that,” says Gray, “it goes down your street and starts feeding your neighbours.” Talk about good karma.

Where a typical house costs about ten per cent less than the one Gray built, that figure drops to six or seven per cent if you factor in the energy savings. And those numbers will likely turn out to be lower as energy prices rise over the coming decades.

An Artful Future
Gray sees good things ahead. With building codes changing over the next five years, he sees more concrete tilt-up building in the future.

He’s big on spreading the word, too, and is keen to tour people — including other builders — through his home in order to share the ease and wonder of building with concrete. Not only is it warm, solid and rot-free, Gray’s own home is a testament to the fact that a concrete house can be just as pleasing to the eye as one made from traditional materials.

“When anyone is building a house and spending that kind of money, they should be building a piece of art,” he says. “It’s the biggest piece of art you can buy, so you should really make it a statement.” 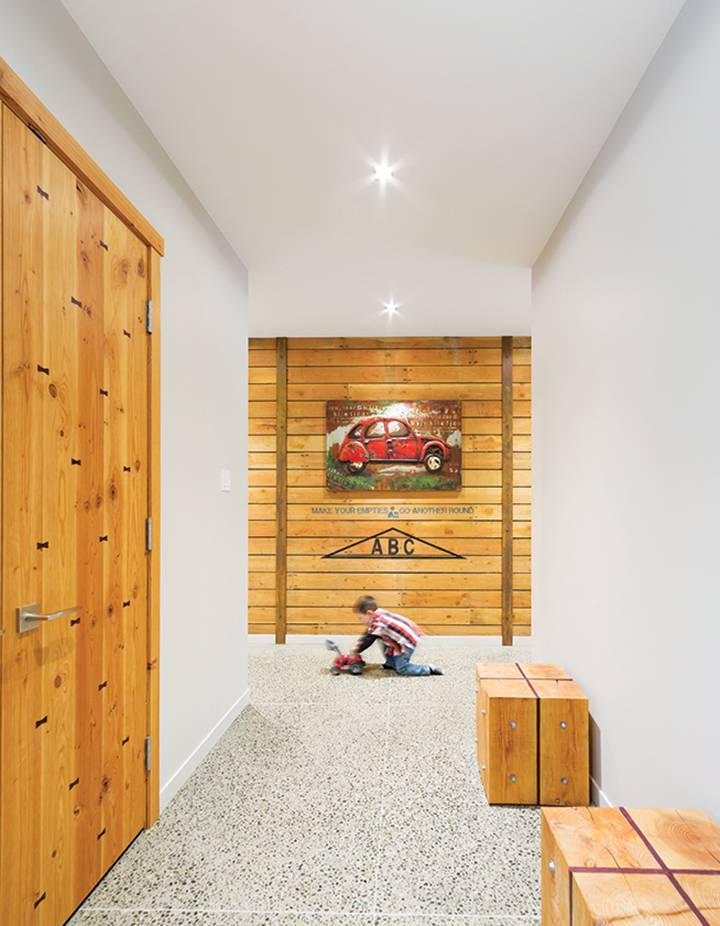