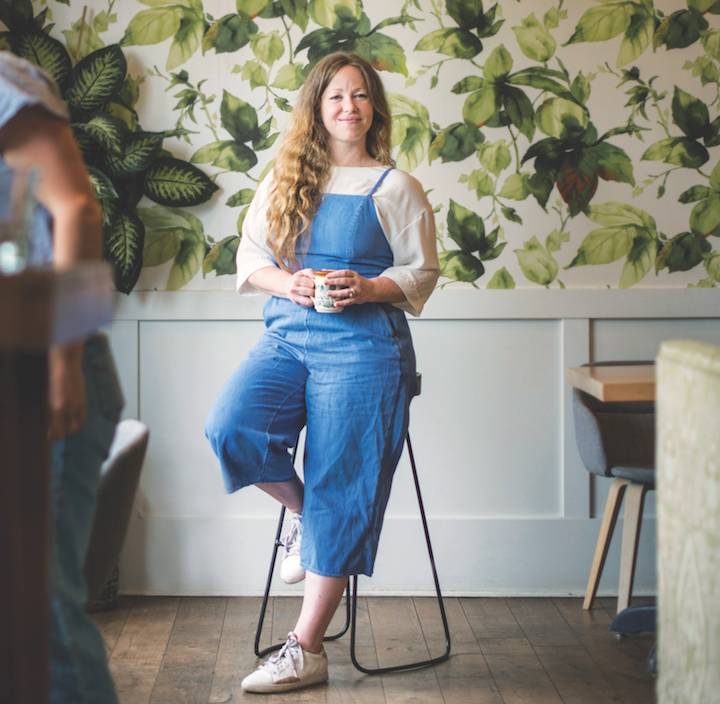 “I knew this would be the place — the moment we opened the front door, it was like coming home. But there was definitely some energy here.”

Hayley Rosenberg talks about her 1888 heritage home-turned-restaurant as we climb the steps into the attic office of Nourish Kitchen and Café. It’s a room few visitors would guess is here, closeted behind a subtle door on the second floor. The stairs are steep and narrow, and creak up to a tiny loft with a picturesque window, two desks, mismatched chairs and stashes of paperwork. With white walls, distressed wood floors and a scattering of plants, it’s one part design catalogue, one part office den and one part grandma’s house.

This is where the planning happens — where themes are decided, important conversations are had and administrative work is executed. It’s also the place where Rosenberg and her staff agree you can feel the soul of the house.

“This was definitely a creepy space when we first came in,” says Rosenberg, the mastermind behind the restaurant. “We laughed about it being haunted, but it was. It felt sad and lonely and ignored. We really worked with the space to bring it back to what it could be.”

Guests often compliment Rosenberg on Nourish’s warm, inviting nature — it is, in fact, like coming to Grandma’s house, they tell her, even for those who never had a grandma like this. That’s the pinnacle of what Rosenberg has tried to create: a place where people feel connected and cared for.

That approach put Nourish on the prestigious list of Canada’s 100 Best Restaurants in 2016, and it’s become a must-see attraction on Victoria’s tourist footpath.

The philosophy behind Rosenberg’s kitchen is simple: use real food to make people feel nourished. That means sourcing seasonal, whole and unprocessed ingredients to create dishes for everyone: meat lovers, vegans and those living gluten or dairy free. And, make space for people to visit (hence the upstairs gathering rooms). For some, the restaurant is a rare find; for others, it’s something a little different.

Rosenberg credits everything she holds dear about nutrition to her own grandma, “Bubbie,” who believed food could heal the body and soul. It was how she expressed her love, Rosenberg tells me.

“By age two, I was in the kitchen making bagels with Bubbie and, at Friday night dinners, I had a special task to set the table,” says Rosenberg, who grew up in the fishing town of Steveston. “I took my role very seriously.”

Later, when Rosenberg enrolled in a holistic nutrition course in Vancouver, she learned the science behind what her grandmother had already taught her — for example, how bone broth is such a nutrient-dense elixir that it can be instantly absorbed by the body. Rosenberg tells me if someone was overtaxed or ill, the first thing Bubbie would do is put on a pot of soup.

“The recipe we use at Nourish is actually Bubbie’s recipe for bone broth,” she says. “It’s her contribution. And, in that way, it’s kind of like she’s here.”

A Return to What Matters

Before Nourish was a concept, Rosenberg worked for years in Vancouver’s restaurant industry. She loved entertaining and seeing the connections people made when they dined together. But as her training and her grandma’s wisdom took root, she found the glutenous meals, excessive waste and high bills increasingly uncomfortable to witness.

As her work life fell further out of alignment with her principles, Rosenberg’s vision became clear: a restaurant that could make people feel happy and healthy.

Her fascination with traditional food philosophies brought Rosenberg and her husband to the Island to create her dream. It started in 2010 as a tiny café on Quayle Road in Saanich. As the restaurant grew in popularity, it soon outgrew its space. Rosenberg knew things had become unsustainable, and she even considered shutting down — until, in 2015, a friend showed her a heritage house that had just come on the market.

Nourish grew quickly in its new home, transforming from a mom-and-pop café to a business with very real numbers. The learning curve was huge, Rosenberg says. It would be another few years before she would know what to do with the Saanich location. Thanks to the resident cat, Charlotte, and the local wildlife, Charlotte & The Quail was born, as an annex to Nourish and a tribute to how it all began.

“With any success, you have to ask yourself, ‘Is this success for me? What are we working towards, and why?’ says Rosenberg. “You have to try, but when you realize you’ve stepped off the mark, you have to give yourself permission to adjust. I want to live consciously and be really intentional with this company. Our goal is to make sure we’re creating something healthy and sustainable.”

The day I meet with Rosenberg, she’s just announced Nourish will no longer be serving dinners. It’s a move most restaurants would consider detrimental, but Rosenberg is clear on her mission. She wants to create change in the industry, fostering an environment where people can connect meaningfully, and she wants to do this with the wellbeing of the staff, environment, economics and lifestyle in mind.

If there’s one theme Rosenberg has lived by for years, it’s edit and revise. That, she says, is nature in a nutshell. More change could be coming — her dream is to own her own farm on Pender Island. For now, she’s focused on this one.

“I love making things beautiful, and I’m inspired by the seasons and cycles Mother Nature takes us through,” she says. “I try to mimic that in our atmosphere and our menus. Change is inspiring. It gives us a lot of opportunity for creativity.”

Rosenberg says Nourish will always be changing — from the menu, to the furniture, to the platform. But there are a few things guests can expect with every dining experience: there will always be something green on your plate, the food will connect you to the season, you’ll never see anything processed or deep fried and, most importantly, what you eat will help you feel good.

“My vision for Nourish was always that we’d create an environment that was happy and healthy and fun — for our guests, for our staff and for us,” says Rosenberg. “I want people to feel inspired. It’s that simple.”