Look Inside Mary Lou Booth’s Home
Story of the renovations follows the images. 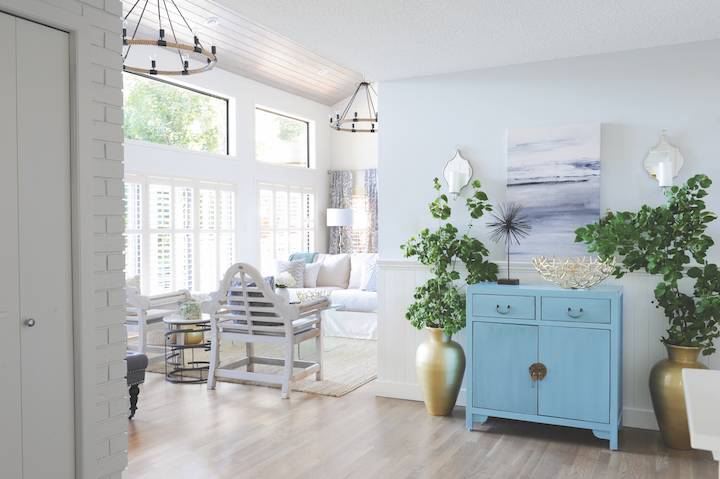 Homeowner Mary Lou Booth found a way to reclaim her space with this extreme home redesign. The formerly dark room, weighed down with navy carpets and a red brick fireplace wall, was transformed into a bright beach house. Carpets were replaced with white oak hardwood throughout the main floor, which required sanding and a specialty stain with titanium and iron oxide to create the worn look. Photograph by Tracey Ayton. 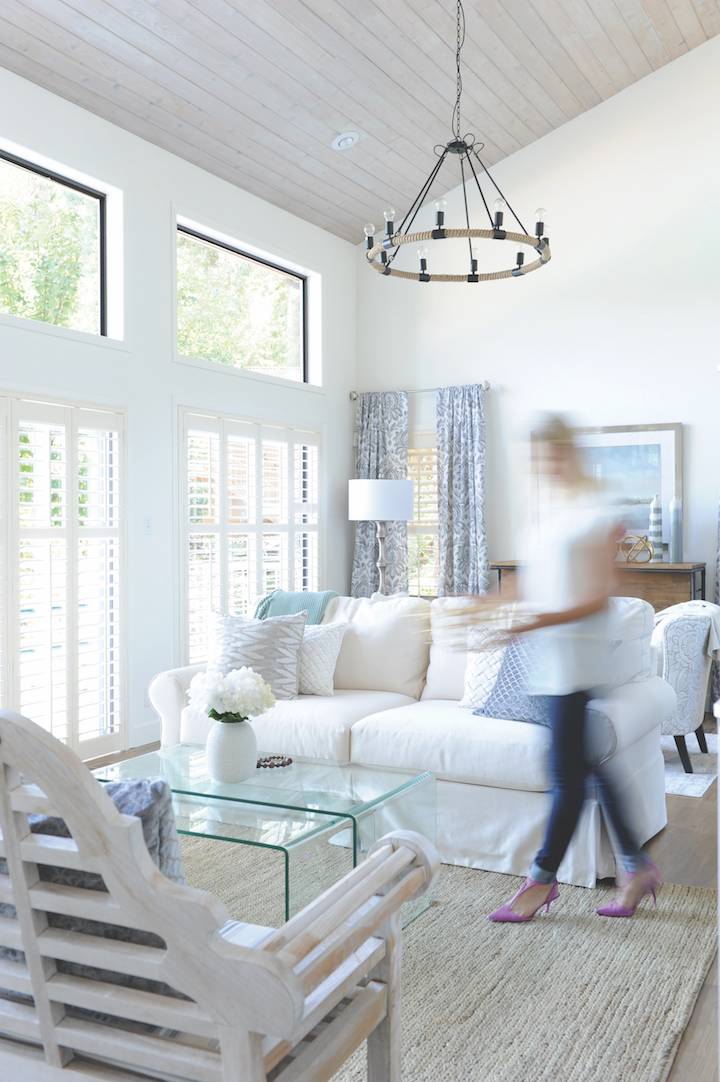 “Traffic” finish from Bona US was layered on to keep the colour clean and crisp. The ceiling was sanded and hand brushed with a semi-transparent stain over the varnished boards to show off its parallel lines. Photograph by Tracey Ayton. 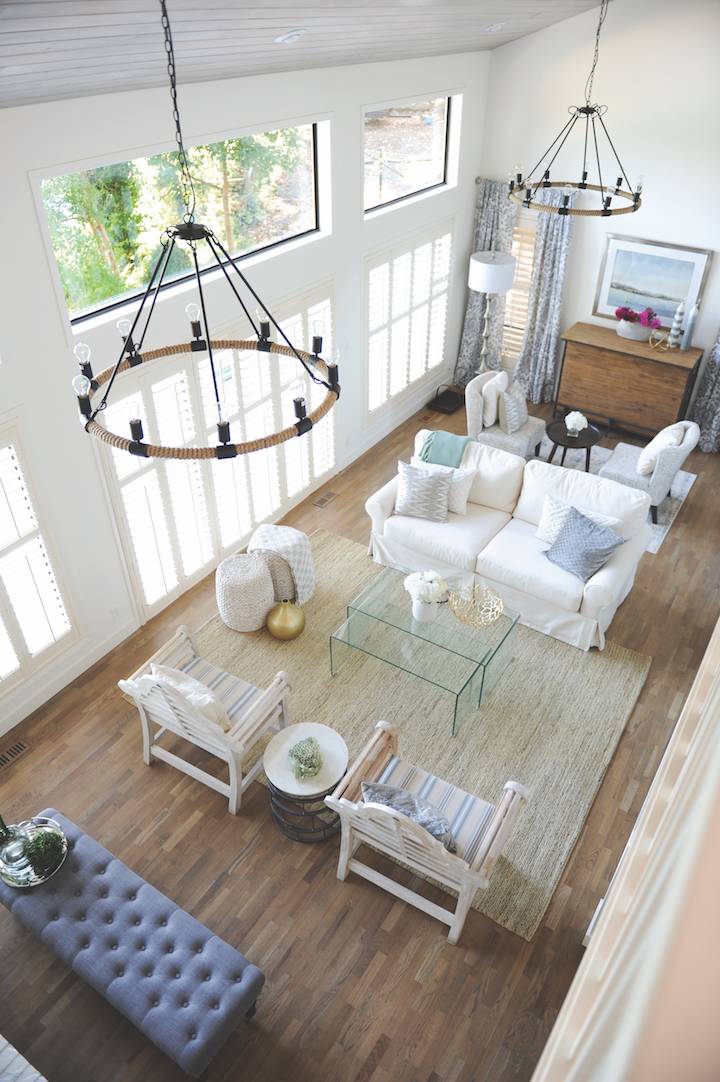 The living room’s bold wagon-wheel lights from Mercana tie in the beach theme and draw the eye upward to add dimension to the home. The jute rug from Restoration Hardware offers texture, which designer Jessica Touhey says is essential when working with a monotone palette. White shutters were installed to complement the beachy look. Photograph by Tracey Ayton. 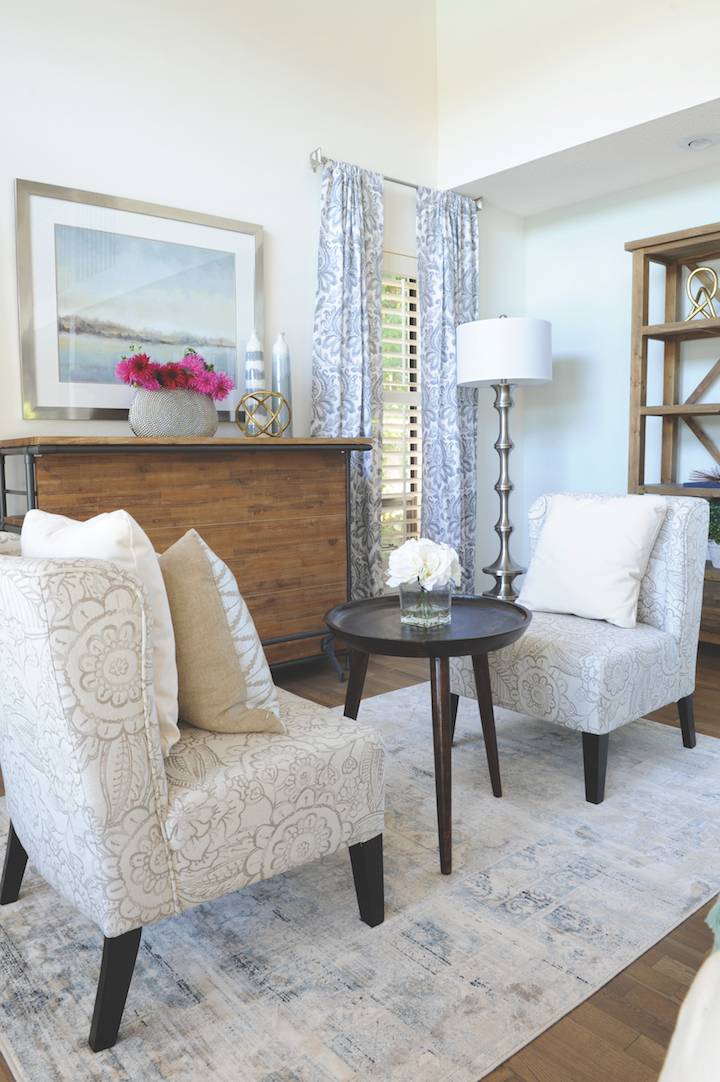 Booth and Touhey aimed to bring as much femininity into the redesign as possible. The home was entirely repainted with Benjamin Moore White Dove, creating a harmonious look for the trim and walls. The walls feature an eggshell finish, while the doors, hardware and wainscotting are in semigloss. Photograph by Tracey Ayton.

The original dark red fireplace feature wall was repainted with the same Benjamin Moore White Dove found throughout the house — a move some contractors warned Booth was risky on brick. The result, however, turned out even better than expected. Photograph by Tracey Ayton. 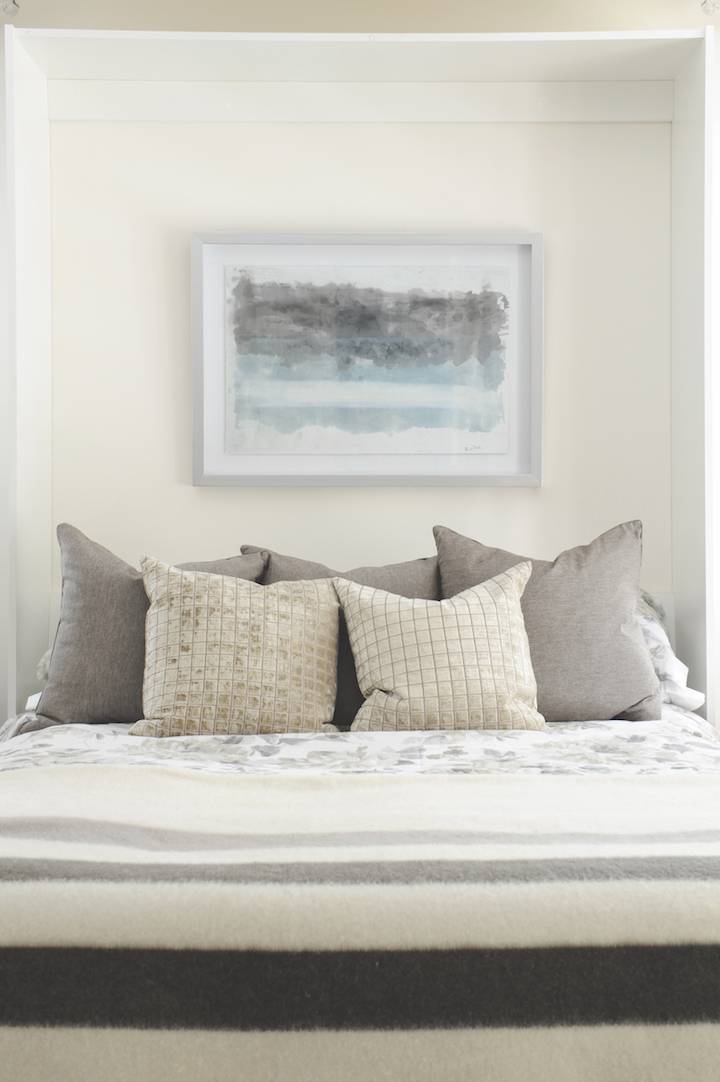 Wainscotting was installed throughout the stairwell and the hallways of the home to add dimension, and the trim, railings, mantles and architectural beams were refinished to match the look. Photograph by Tracey Ayton. 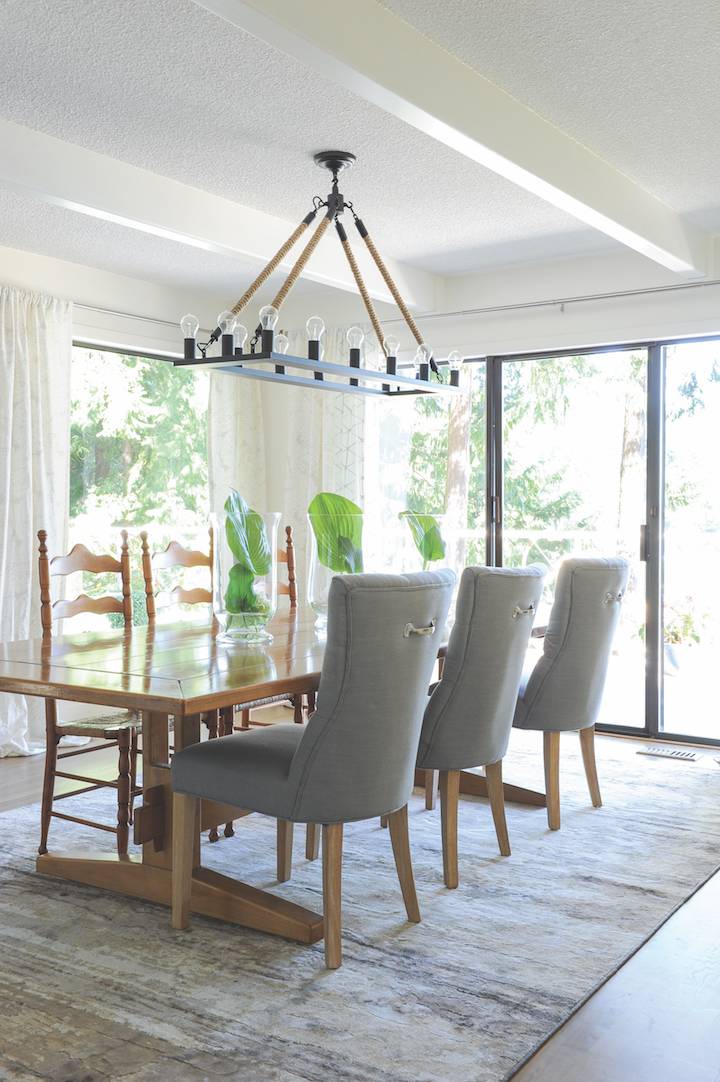 Part of Booth’s challenge was to decide what to keep and what to let go. The locally made harvest dining table, which Booth and her husband had purchased together, was one item to stay. To freshen the look, however, Booth and Touhey decided to keep three of the original chairs and bring in three modern pieces. Flowing Ralph Lauren curtains and an elegant rope-iron pendant lamp, done in the same style as the wagon wheels in the living room, contribute to the beach-house feel. Photograph by Tracey Ayton.

Mary Lou Booth and her husband built their dream home together 25 years ago on a mid-Island waterfront property, tucked into a cove of coniferous trees. When her husband passed away in 2015, Booth knew she needed a change. She didn’t want to leave her home and the memories built there, but she’d need to reinvent the space if she were going to stay.

Fortunately, with the help of a keen designer and contracting crew, she was able to transform the 4,500-square-foot home into a revitalized beach villa — one that spoke directly to her style.

“When I wake up in the morning and I’m staring out at the ocean with my coffee in hand, now I think how fortunate I am,” says Booth. “This change was part of my healing, and the space feels entirely different. It’s a real beach house, and every window can change your outlook.” 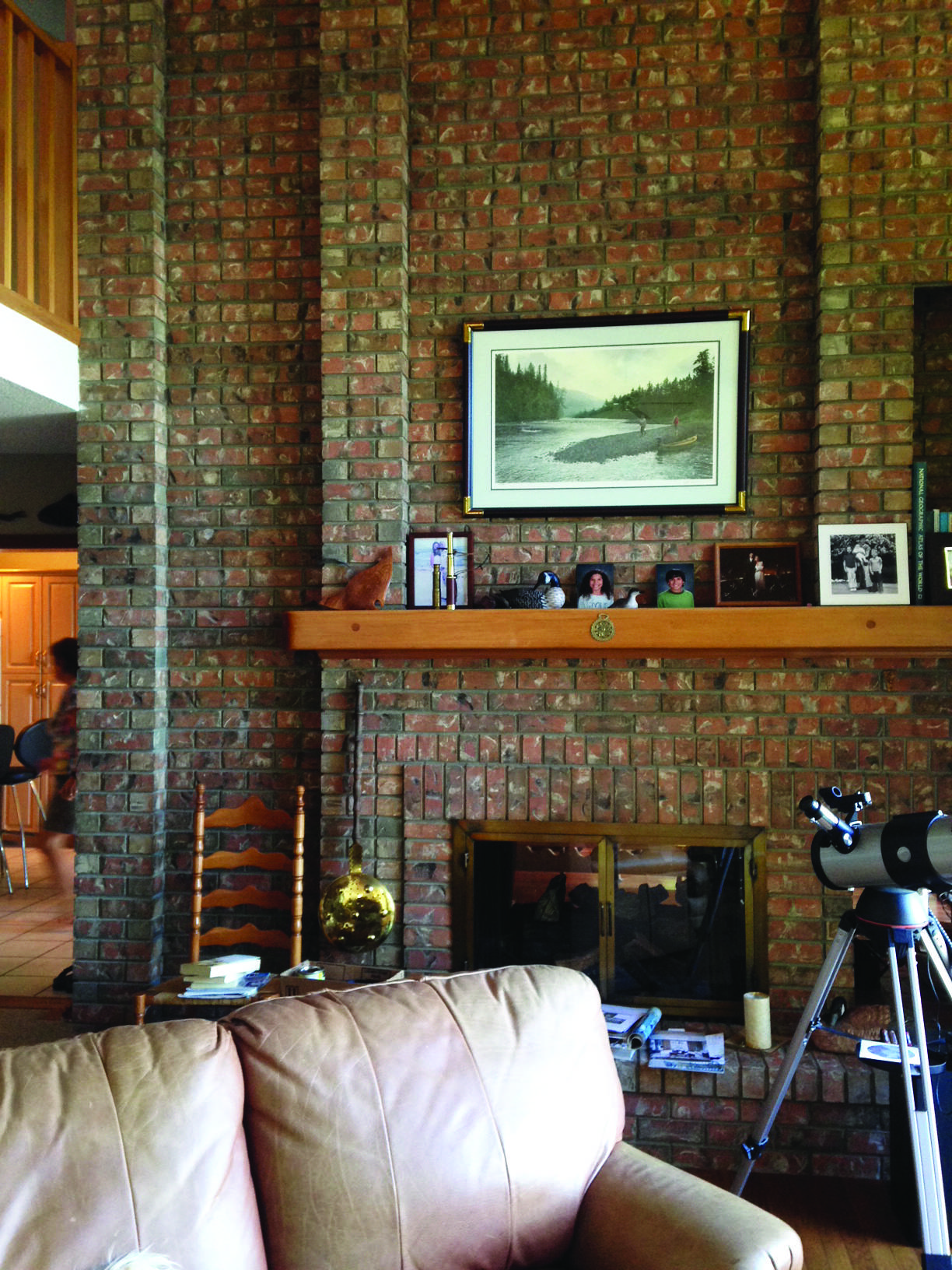 The home before the renovation.

When designer Jessica Touhey, owner of Jessica Touhey Interior + Design, first saw the home, she knew serious changes were needed. The house was dark, with navy carpets, a red brick statement wall, dark cedar ceilings and fir trim that captured the reddish tone of the brick. Booth loved to entertain but, despite the expansive rooms and waterfront views, the home was gloomy and uninviting.

“As soon as I saw the main room, I could see how much potential it had and how underused it was,” says Touhey. “I said to Mary Lou, ‘Oh, I’m going to impress you with how much we can transform this — you are going to love it.’”

She was right. Touhey had a mission to bring in more feminine energy and brighten the space by turning nearly everything white. It would be a bold shift, even by Touhey’s standards, but this home was an ideal candidate for the look.

With the help of contractor Steven Fitzpatrick, owner of Made To Last, they created the light and airy feel. The carpets and tile elements were replaced with white oak floors in a driftwood stain. The trim, railings, mantles and architectural beams were refinished. The ceiling was sanded and stained with whitewash, and the house was repainted with Benjamin Moore “White Dove” throughout, and accented with “Snowball.” New interior doors were added, with polished chrome hardware. White shutters completed the look.

Yet, the biggest statement came from painting over the brick wall.

“Mary Lou was looking for a new beginning, so we had to go all in. Even the furnishings were dark and their layout was awkward, so we changed them,” says Touhey, noting some things stayed — like the locally made harvest table. “We wanted to pay respect to the past, but make the space entirely her own.”

Touhey integrated the beach theme in more subtle ways, adding rope lamps and a tan Berber stair runner that mirrored the nautical look. She partnered a white couch with a pair of bleached teak chairs, and brought in elements of beach glass and ocean décor. With such a monochromatic look, Touhey went heavy on textures to ensure the space kept a soft and dynamic feel.

“My goal is to create rooms that feel good,” says Touhey. “The more peace we can build inside a home, the more it keeps our soul relaxed.”

Fitzpatrick was pleased with the success of the renovation, and that the team could change so much without having to disturb the integrity of the home.

Fitzpatrick says the redesign didn’t require drastic ‘plastic surgery.’ “In a lot of cases, it’s easier to start from scratch, but this home had great bones, so a change like this worked. Sometimes, you don’t know what you’re up against until you start pulling things apart.”

Booth says she plans to live here as long as she can. It’s become her dream house again and, this time, one with her own style.

“Your first reaction when you lose your partner is to say, ‘How am I going to do this?’” she says. “But you will survive, and slowly things get better. There is wisdom to the advice that you shouldn’t make any major life choices right away. When the time is right, you will find yourself again.”