Within moments of viewing her future home in Oak Bay, Tara Hurst imagined hosting holiday get-togethers in the space.

“One of the first things I thought was, ‘This is the perfect Christmas house,’” she says. “The dining room was so grand.”

The designer and her husband, Michael Zary, had been house shopping for over a year. Coming from a loft in an older character-filled building in Chinatown, they were very specific about what they wanted, which was an Arts and Crafts-style home they could renovate themselves. 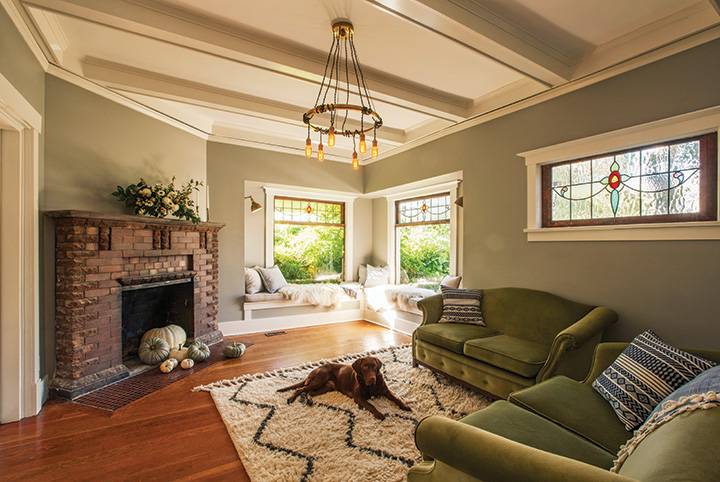 Victoria has many examples of Arts and Crafts-style homes, which date from the 1890s through to the 1920s. Architectural details include stained-glass windows and decorative beams, as well as built-ins like this inviting window seat, which was recovered by Bespoke Design. Here, Zadie the chocolate Lab relaxes in front of the home’s original fireplace with its seasonal touches conceived by Hurst’s friend and collaborator, florist Clare Day.

Arts and Crafts homes embrace simplicity and handcrafted artistry, countering the previous excesses of Victorian architecture and the machine-driven Industrial Age. The movement inspired the Craftsman and bungalow houses popular in Victoria in the early 1900s.

“When you’re looking at 100-year-old houses, you find all kinds of crazy things,” Hurst says, laughing.

Once they had found their ideal house in Oak Bay, there was much work to be done. The first planned project was the lone bathroom, which they completely renovated to be true to the 1914 house’s original era.

Hurst accidentally started another huge endeavour at the same time, when she started stripping wallpaper in the living room.

“There were so many layers, the walls started to crumble off, so we ended up taking all the plaster and lathe down,” she says.

New walls and built-ins were added, and the existing cabinetry in the dining room, with its gorgeous leaded glass doors, was given a fresh coat of paint. The stucco was also stripped away and the box beams in the ceiling painted.

The original floors, with all their history and texture, have been untouched.

“Aesthetically, I’ve always been drawn to telling a story. For me, with a house like this, you feel like you’re in a story,” Hurst says. “While I appreciate modernism in design and in my work, there’s something comforting and romantic about living in a home that has that feeling. When you honour the house and the history of the house, you find you can strike a balance between new and old. It can be a beautiful balance.” 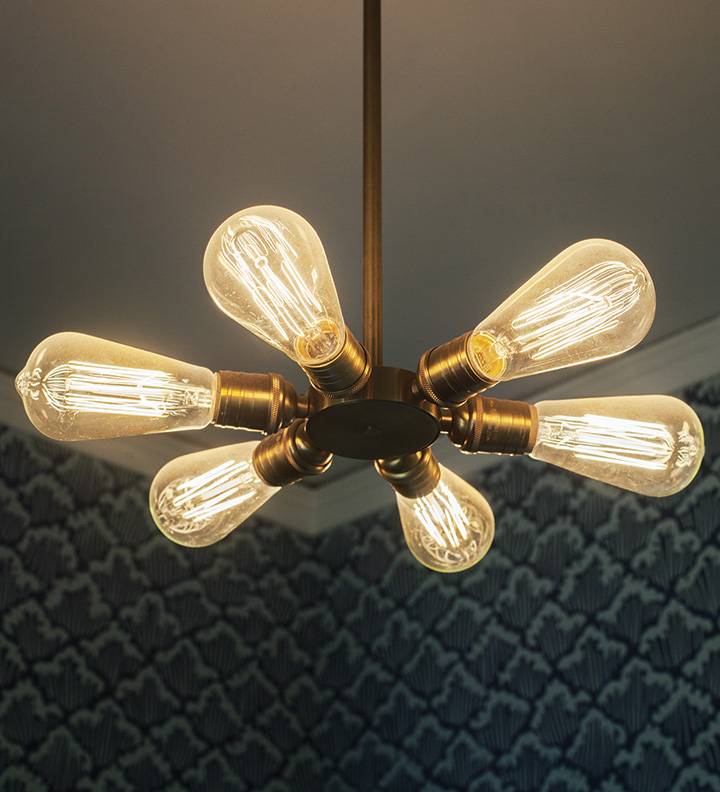 The home’s entranceway is given period panache with a light fixure from Schoolhouse Electric and handprinted Aranami wallpaper by Farrow & Ball. 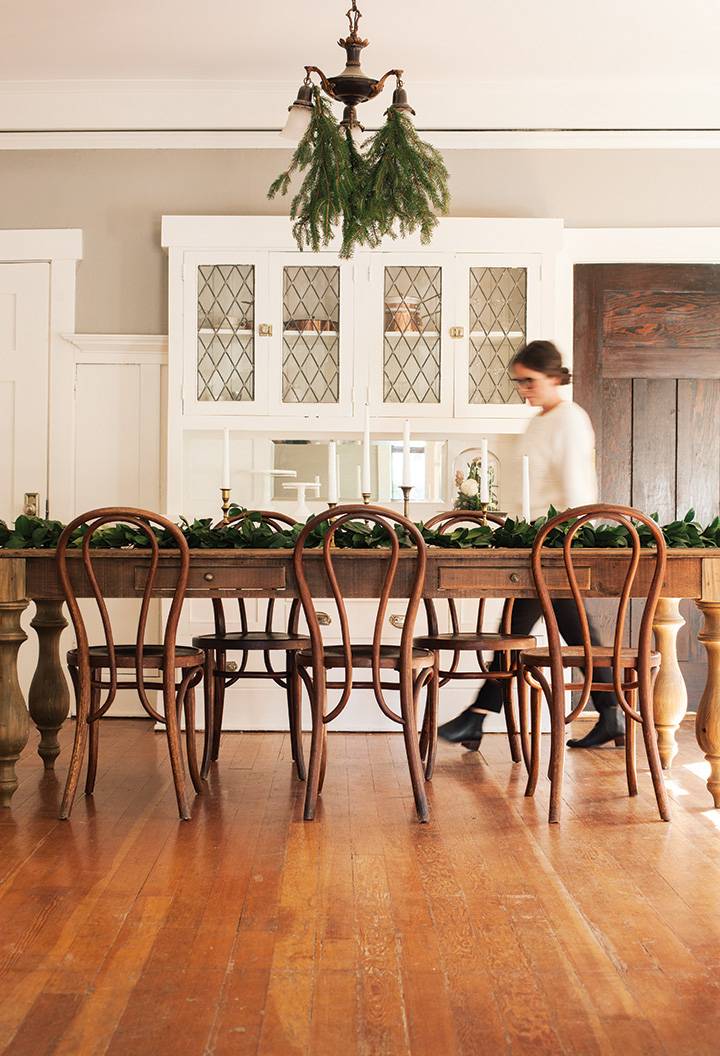 Hurst calls the dining room the centre of the house. “We spend the most time here, just sitting at the table,” she says. “And whenever we have friends over, it’s where everybody ends up.” The leaded doors on the built-in cabinetry are another quintessential element of Arts and Crafts homes. The cabinetry and original woodwork were given a refresh with a coat of Wimborne White, while the walls were painted Lamp Room Gray, both by Farrow & Ball. The table, from Nest & Cradle, and the vintage Thonet chairs, from Pigeonhole Home Store, complement the room’s character. 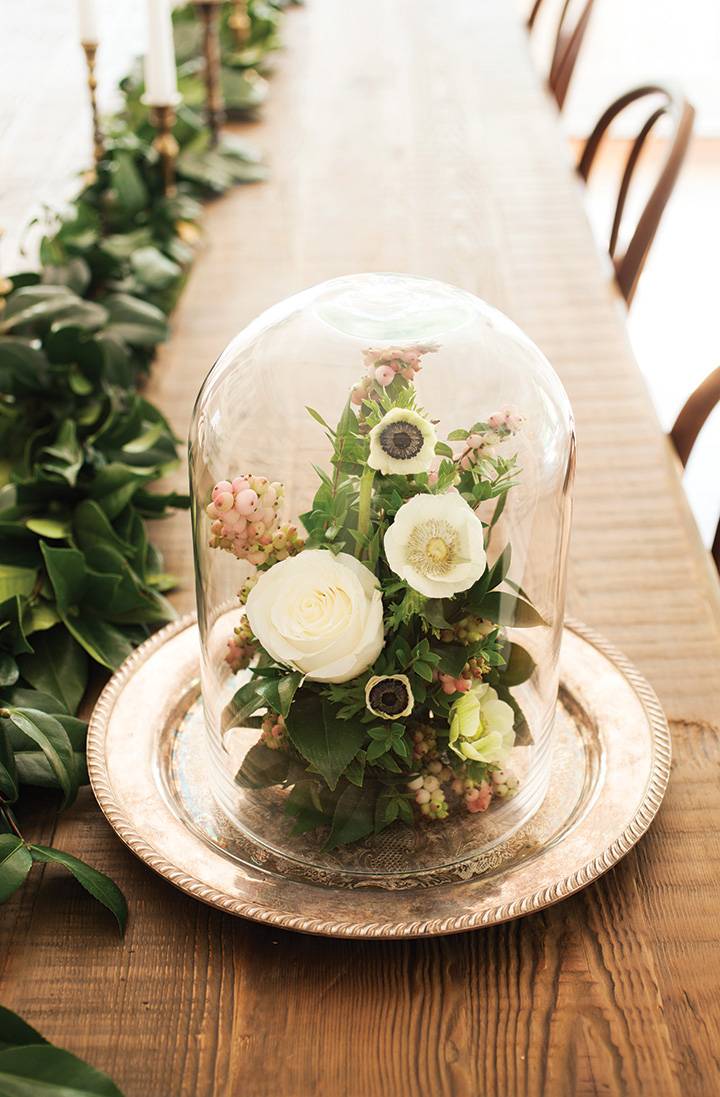 To stay as true to the era as possible, Hurst found a supplier in Tennessee who shipped an expertly restored 1920s sink and tub. The look is completed by replica fixtures from Kingston Brass and a brass medicine cabinet from Restoration Hardware. 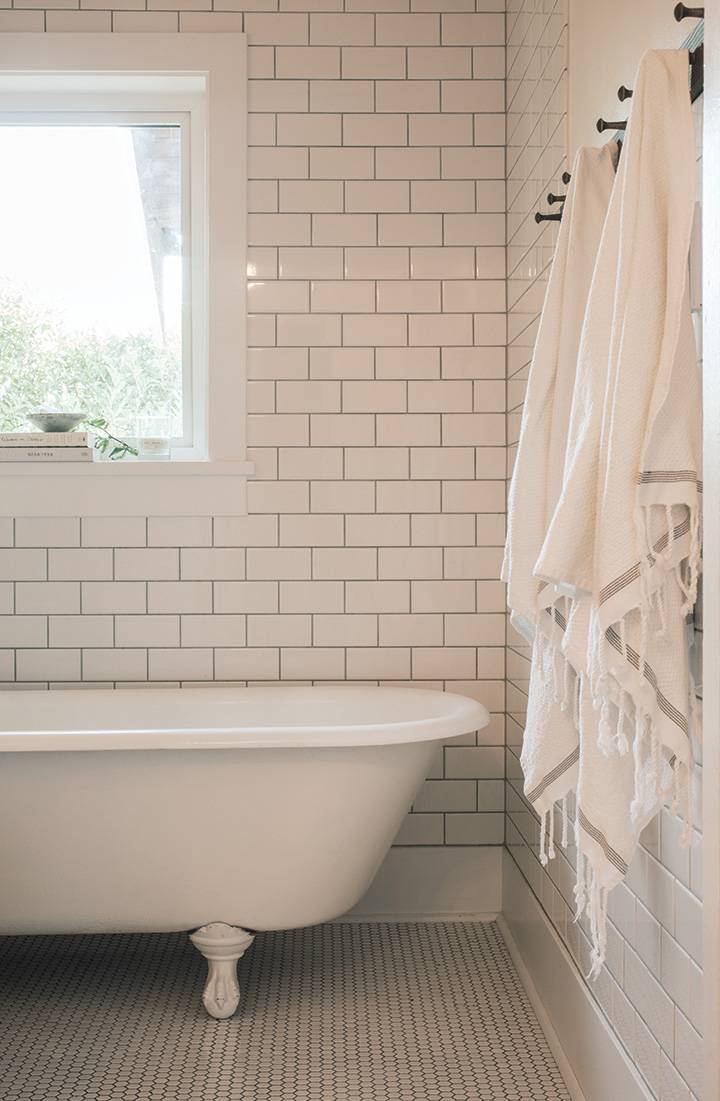 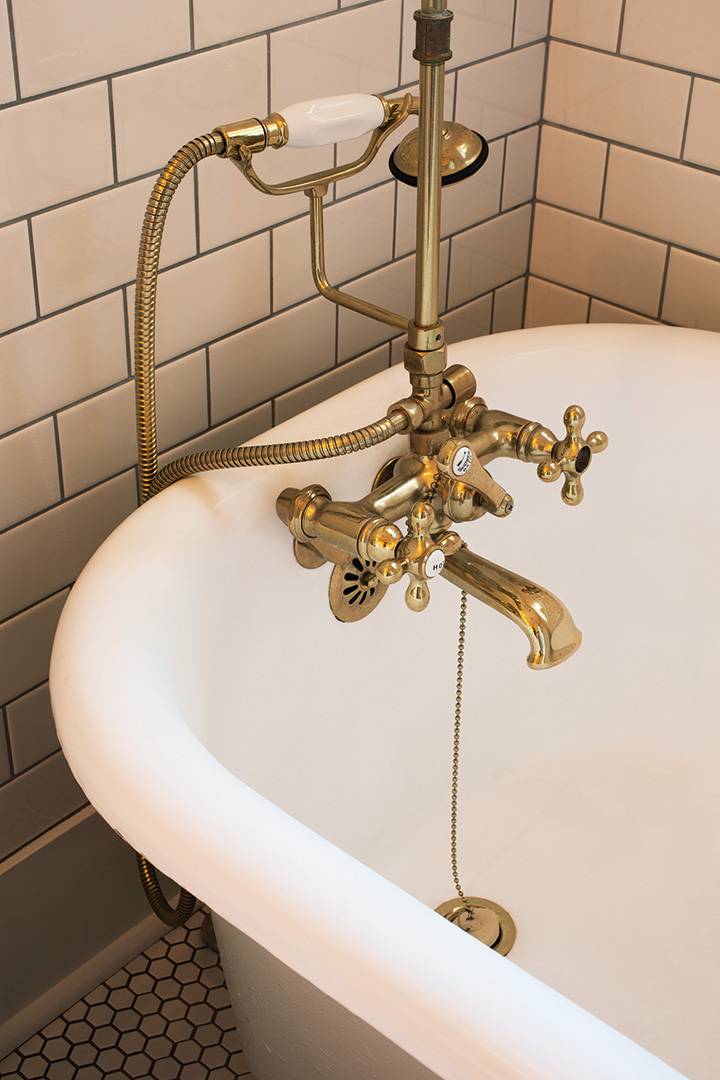