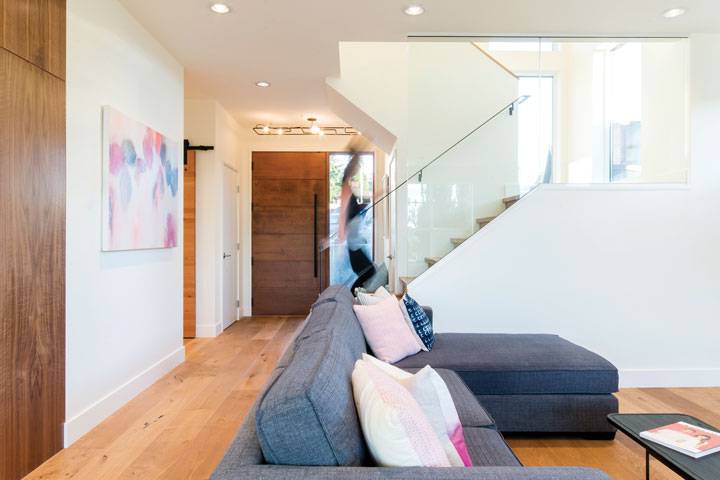 When Tamara Bush first heard about the lot listed on a new street in Victoria, she had to see it. There was only one house built on the strip back then, but the September sun was setting and a small gathering of neighbours had come by to watch the view from that particular spot.
It was love at first sight.

Fast forward a year later, and Bush had completed what she now proudly calls her dream home — though this is no ordinary homebuilding story. As owner and principal designer of Inhabit Designs, Bush knew this project would be her most personal yet, but anyone who visits the space can see there’s more to it: her home is part showpiece, part princess castle and part act of rebellion.

“My goal was to create something that really captured my taste and pushed the boundaries a little, but would also be something I could stand living in every day,” says Bush. “I had a lot of ideas. Some turned out to be a little too big, as the house had to fit the lot and make sense in the area, but once we started mapping it out, it became clear what had to stay.”

Bush knew her home would be designed for entertaining and had to capitalize on the view she first fell in love with. Though she’d had to make some sacrifices when it came to her initial vision, she was able to keep some of her fairytale wishes — including a moat around the entryway — that set the property a few notches above normal.

With a contemporary colour palette of grey, white, black and gold, mixed with the warmth of smoked oak floors, walnut and lacquered white wood cabinets, concrete, marble and mixed metals, the home comes alive through its materials. Bush upped the design ante with a subtle theme of geometric forms and layered texture throughout the house, from 3D concrete tiles in the powder room to hexagonal blue, black and gold wallpaper in the dining room, to the chevron marble mosaic lines of the full-height kitchen backsplash.

It’s through the not-so-subtle elements of the house, though, like the deconstructed hex brushed gold pendant light over the dining table, or the black pipe chandelier in the entryway, that Bush’s self-professed obsession with lighting shows up, as well as her ability to create a sense of marvel in a space.

“I took the opportunity to have some fun with patterned wallpapers in small doses, along with accent colours in the accessories and décor — something that can be easily edited over the years,” she says. “Being able to design my home from the ground up means everything is laid out exactly as I want it and I get to spend every day living in a space that delights and inspires me.”

Bush admits that, as a designer and real estate enthusiast, she’s always looking for her next project. Although she’s transformed every space she’s lived in with her own sense of style, when it came to building her own home, she was waiting — waiting for the perfect place, the perfect time, the perfect life scenario. Having renovated and flipped many properties before, she finally decided to build for herself.

“I was always trying to pick the perfect time, the perfect spot, and it seemed like I was waiting for the stars to align,” she says. “When I found this property, I just decided to build something that I loved that was informed by the locale, the views and my own personal style. The result is a home that reflects my design aesthetic and takes advantage of all of the design decisions I’ve made.”

Bush is the creative mind behind the designs of more than a few Victoria hot spots, from Lot 1 Pasta Bar and Bin 4 Burger Lounge, to Sante Spa and Mayfair Shopping Centre. She has worked for large firms and has run her business for over a decade. Her work can be seen in restaurants, retail stores, hotels and airports around the world. She didn’t plan to go into design — she’d been oscillating between being a lawyer and a geo-technical engineer — but it was the form and construction of furniture, as well as the problem solving involved in the trade, that caught her. That troubleshooting expertise turned into a huge asset for her own home.

“This property had such an irregular footprint that the shape itself presented a lot of challenges,” says architect Ryan Hoyt of Ryan Hoyt Designs. “Our goal was to create something that would look organic without being forced. With an angular property line like this, you can’t just think of how it looks when you drive up, but how it looks from all sides.”

Hoyt and Bush worked through multiple adaptations of the design until they came up with a geometrical shape that narrowed in the front and widened in the back to counter the odd shape of the lot and the sloping hill behind it. Hoyt considers the home build, with its dark roofline and contrasting concrete and wood finish, a major success. The 2,625-square-foot home and garage creates a sense of interest while still looking like it belongs within its surroundings. The element he’s most proud of, however, is what he calls the “feature staircase” inside the home.

“To have a staircase near the entry that’s both showcased through the glass dividing wall and juxtaposed against the linear lines of the house is eye catching,” says Hoyt. “In some homes, this would feel out of place, but in Tamara’s space it becomes a centrepiece.”

Builder Chris Strong of Strong Construction Group agrees that working on this project required outside-the-box thinking, but, as with any project involving so much creativity in the concept, the result is all the more impressive.

“It’s always rewarding to work with a design professional, because every detail has been workshopped and thought through — nothing is left to question,” says Strong. “You can be that much more proud of your work when you do something to this level, and it’s a privilege to get to bring those concepts to life.”

One of the most impressive concepts of the home is likely the water feature, which Bush created with the help of landscape artisan Merle Kroeker of Pacific Ridge Landscapes. The moat is a partial wraparound waterway at the entry of the home, with floating steps leading to the front door. The 12-inch-deep pool is self-circulating, with three small geometric waterfall spouts and a reflective pond under lighting to enhance the dimensions. The feature is flanked by a concrete wall barrier and sedge, Carex and Liriope grasses.

“This was a wonderful feature to build into the space, because it celebrates form over function, which is not something you often get to work on,” says Kroeker. “It’s pleasing to the senses, and it makes you feel like you’re departing from what’s regular and are about to enter a special space.”

Bush’s space has become as special as she hoped, and she often hosts activities and events that make use of the interior and exterior beauty of her home — from her geometrically themed living area to the expansive patio and linear fire pit on the sunset side of the house. 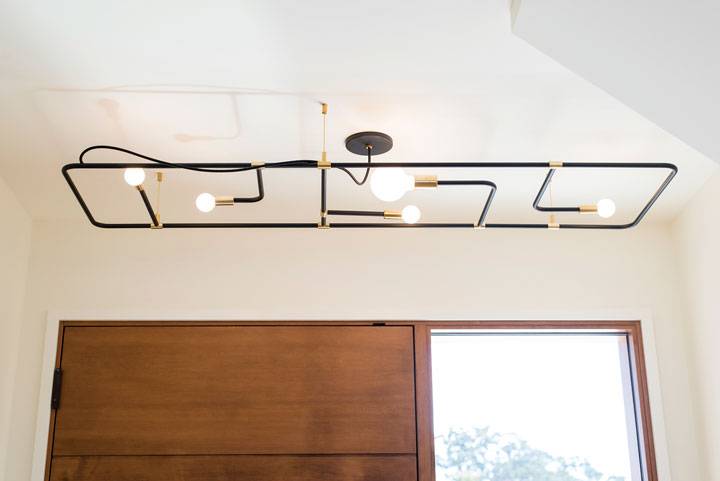 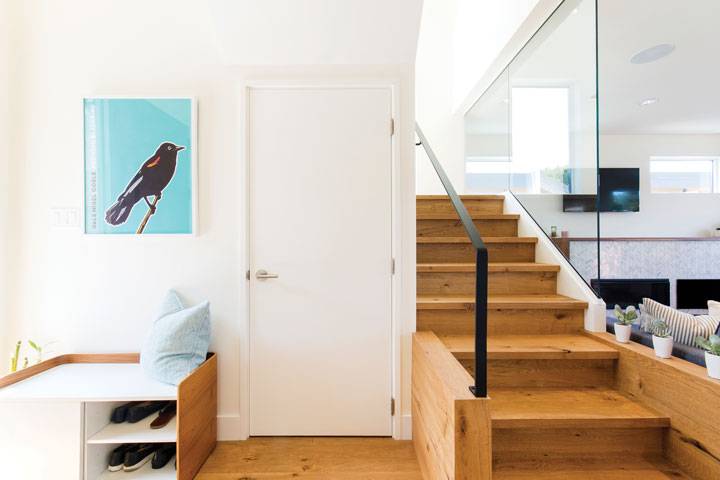 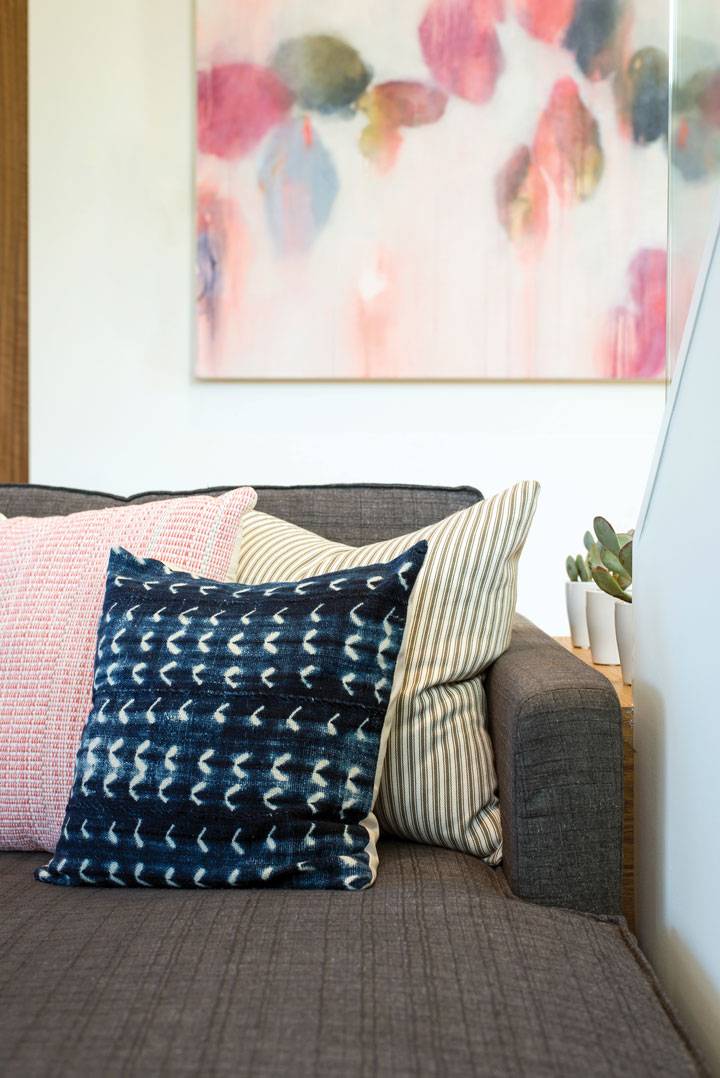 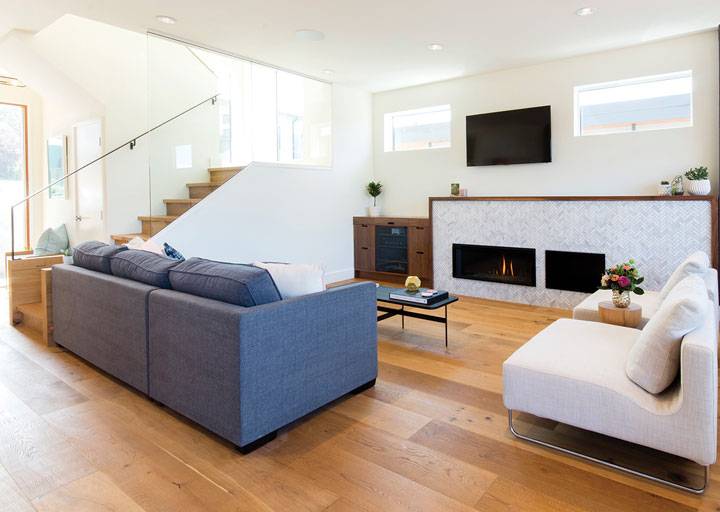 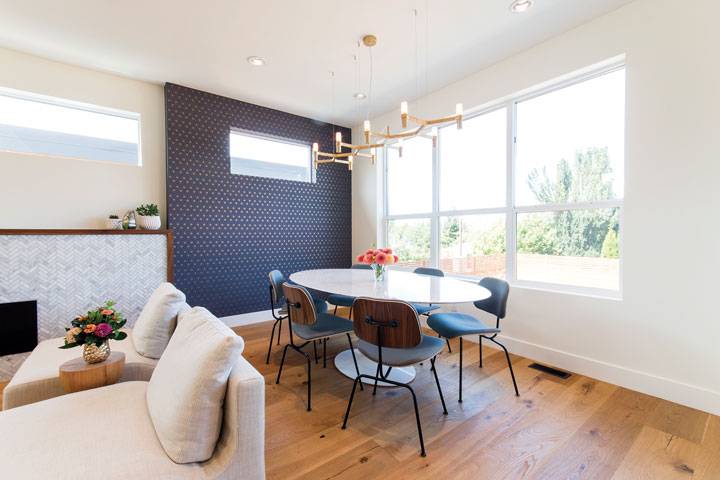 The open-concept living and dining area was designed with hosting in mind, and the room offers a variety of centrepieces to spark conversation, including the Marquis fireplace with its chevron backsplash, the distinctive wallpapered feature wall and the deconstructed hexagonal pendant light over the dining table. PHOTO: SARAH MACNEILL 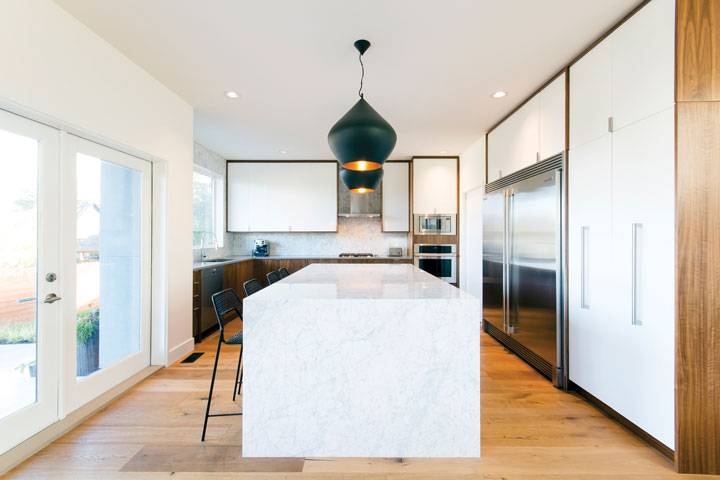 Texture and pattern are also prominent in the kitchen, with the subtle repetition of Bush’s favourite hexagonal shape in the backs of the kitchen chairs. The chevrons in the full-wall kitchen backsplash mirror those found in the fireplace feature. Even the pendant lamps, with their matte black exterior and dimpled gold interior, add another level of texture to this room. PHOTO: SARAH MACNEILL 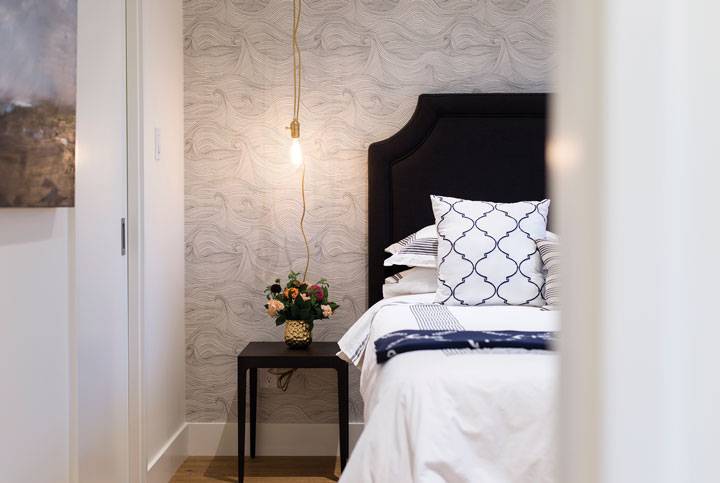 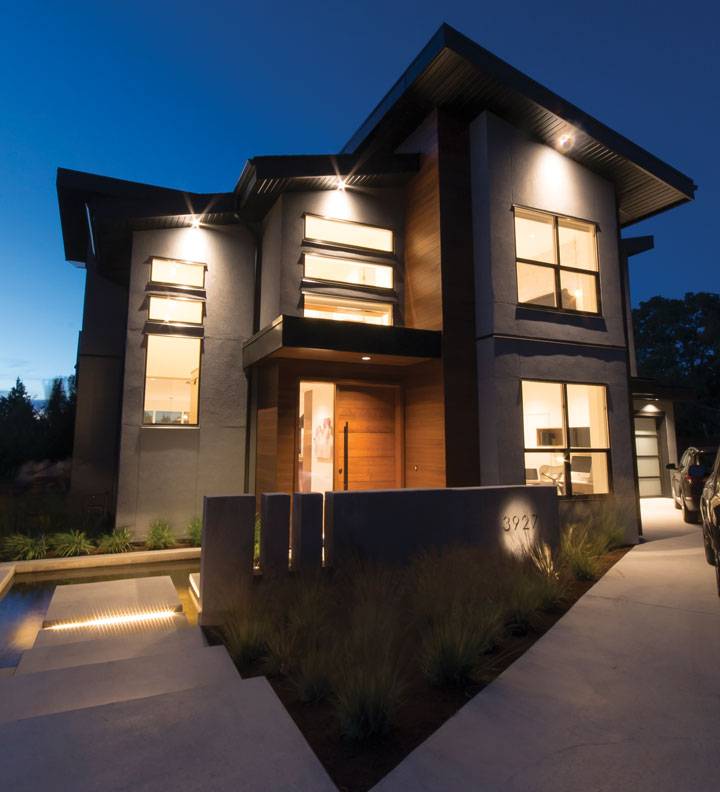 The unusual geometrical shape of this home sets it apart from neighbouring structures without making it seem out of place. The angular roofline adds visual interest, though the shape is for function too. The house narrows in the front and widens in the back as a space-utilizing solution to an odd lot shape and the sloping hill behind it. PHOTO: SARAH MACNEILL 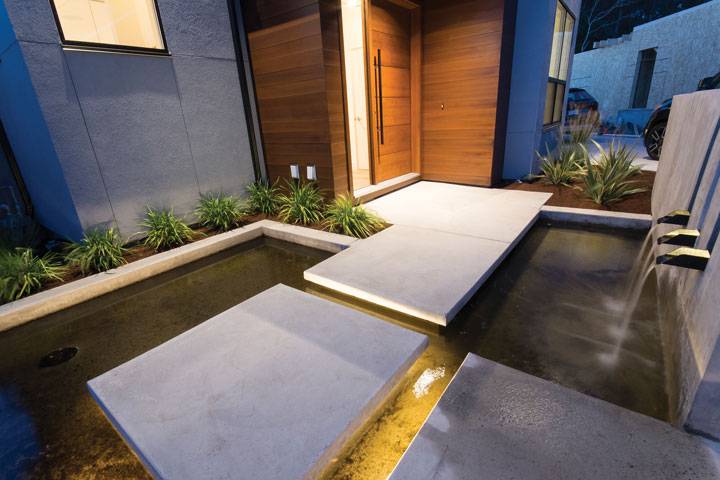 Bush has always been inspired to bring elements of the natural world into her designs, and a moat water feature in the entryway of her home was high on her wish list. It was designed, with the help of Merle Kroeker from Pacific Ridge Landscapes, to create a feeling of decompression and relaxation as guests transition over the water to the home. The floating concrete steps help to create an exotic break from the outer world, and build anticipation for the environment to come. PHOTO: SARAH MACNEILL