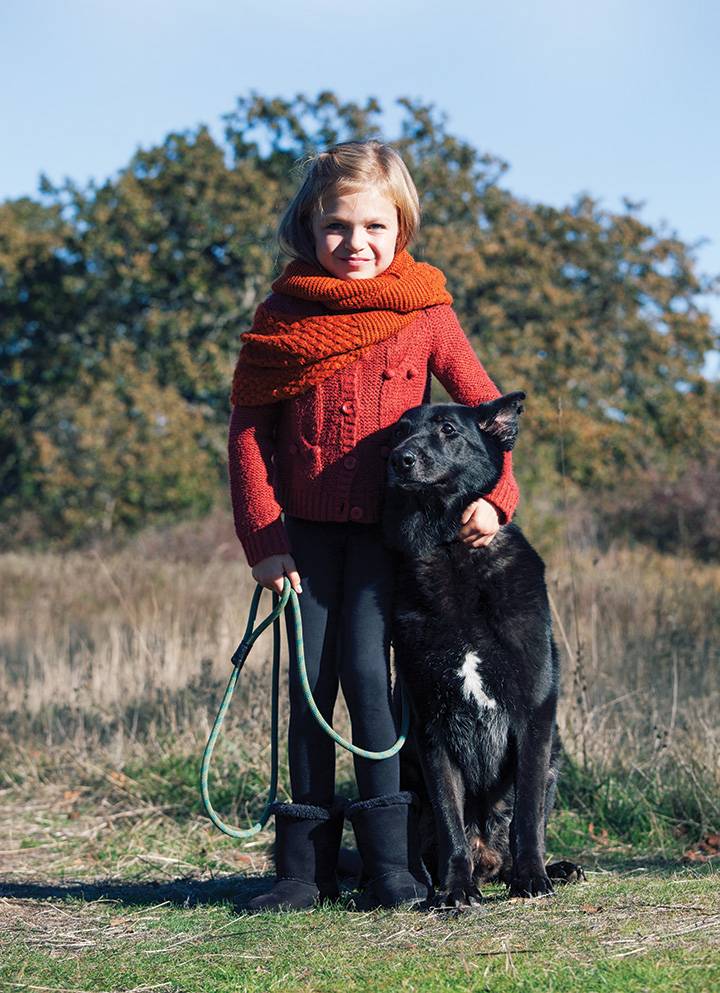 Born with a genetic disorder that has meant years of intensive medical treatment, Maya understands well the power of helping others. She poses here with 10-year-old Toby, an affectionate German Shepherd who was adopted through Broken Promises Rescue five years ago. Toby’s owner recently died, and Toby is again looking for a loving home. Photo: Jeffrey Bosdet/YAM magazine

For Maya’s 10th birthday party, she didn’t want a backyard bouncy castle, a laser tag party or girl-spa get together. Instead, she invited her friends to join her for a party at the Victoria Society for the Prevention of Cruelty for Animals (SPCA). Instead of presents, she asked her friends to donate to the animals.

“She wishes that all animals find a home,” says Maya’s dad Jeffrey. “She’s happy to see that these animals, often coming from a bad situation, are treated so well during this transition.”

Maya understands the power of giving more than most people, in part because she has seen the effects of it in her own life. At age five, she was diagnosed with Mucopolysaccharidosis Type 1 (MPS 1),  a lysosomal storage disorder. And she has experienced firsthand the generosity of people who give to charities like The Canadian MPS Society and the Make a Wish Foundation which last year sponsored a trip for Maya and her family to Hawaii.

Seeing Maya, it’s difficult to tell she’s not just a healthy young girl, but the disease means she can’t lift her arms above her head due to her stiff joints and she has to avoid contact sports and trampolines. Thankfully, an enzyme replacement therapy (ERT) has been developed that, when infused weekly, halts much of the progression of the disease.

While it would be understandable if Maya became self-focused because of all of the medical attention she receives; in fact, she has only become more giving, says her dad.

An inspiration for Maya has been many of the nurses who have provided care to her over the years, giving more of themselves than the job required.

“They spend time getting to know me,” she says. “They understand what I like and need to make treatments comfortable.”

Maybe, says Maya, one day she will also become a nurse and pass on the care she has received. And that’s just one of the positive effects of giving. Whether we are donating money, volunteering time, buying a drink for the next person in line at the coffee shop, giving a gift or offering a sincere compliment, giving tends to inspire the recipients of that thoughtfulness to pass it on and pay it forward.

The Science of Giving
Increasing, we are learning that giving is not just an action that benefits others, it’s a powerful form of self-care, both emotionally and physically. The adage: ‘Tis better to give than to receive’ is scientifically proven.

Heidi Sherwood has long studied the connection between the body, mind and spirit as it relates to health. Not only is she the owner of Sapphire Day Spa, she is a certified ayurvedic practitioner (Examining Board of Natural Medicine Practitioners) and a member of the Academic Advisory Board for the Holistic Nutrition program at Pacific Rim College.

“Many studies,” Heidi says, “have determined that giving, in fact, benefits the givers with a number of health benefits but also, importantly increases happiness. There is something valuable to take away here.” Studies on the emotional and physical benefits of giving include:

• In 2015, the journal BMC Public Health published a review of 40 studies on the effect of volunteering on general health and happiness. The results show volunteering not only improves life satisfaction and well being, it’s also linked with decreased depression levels.

• A 2015 study sponsored by UBC showed evidence that people who give are happier than those who don’t. In the study, donating as little as $5 helped people feel better.

• A 2006 study by Rachel Piferi of Johns Hopkins University and Kathleen Lawler of the University of Tennessee showed that people who provided social support to others experienced lower blood pressure than those who did not demonstrate support for others.

A Calling
Scientists may debate why humans feel the need to be altruistic, but Pamela Saddler of Broken Promises Rescue doesn’t talk of the science of giving. She simply describes what she does as a calling. “Growing up, I was always bringing home strays,” Pamela says. “My mom is a huge animal lover so I inherited that.”

Through Broken Promises, a Vancouver Island animal rescue organization, Pamela and co-director Kathleen Davis, and other volunteers, help pets — from dogs and cats to chickens and rabbits — in the shelter system who are less adoptable due to age, colour, illness or other reasons. They also work to raise awareness of animal suffering.

Despite long hours, hard work and sometimes heartbreaking stories, Pamela says she gains far more from Broken Promises than she gives. What sustains her are the stories, like that of Penny, a once-feral dog who refused to let anyone touch her, to the point where euthanization was considered. Broken Promises was able to work with Penny to overcome her fears and find her a loving home.

For Pamela, giving her time and energy to the animals isn’t an option. It’s a necessity. “How do you stop? There are hundreds of them, and it’s so rewarding to take them and give them the care and love they need.”

“For me, it just feels like what I’m supposed to do. Some days I think ‘I just can’t do it’ — then I look at the photos and I know I have to continue.”

It Works Both Ways
In a society enamoured with stories of sacrifice, we may be schooled to believe that our reasons for helping others should be purely selfless. But it’s hard to deny that giving feels good.

“It is OK to benefit from giving to another; indeed, we all should,” says Heidi. “It connects us with the pure intention of providing for another. The key is to be mindful and present to the needs of others in order to give them that which will truly provide benefit and promote their own well-being.”

Research shows we are biologically wired to feel good when we give to others. In 2006, researchers from the National Institute of Health studied the MRIs of people who donated to various charities. They found that giving stimulates the brain’s reward centre — releasing endorphins and leading to a “high.” Like any high, this one is also addictive.

“I always feel like I’m selfish for what I’m doing,” says Joshua Dawson, founder of the I Am Genie Foundation. “To be honest,” he adds, “I’m doing it for myself more than anyone because of the way it makes me feel.” 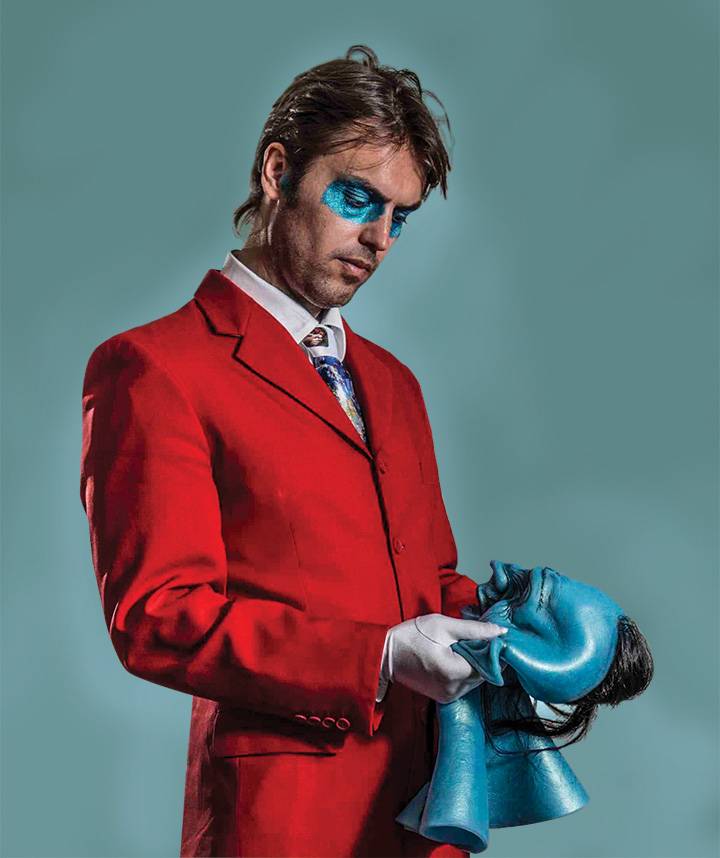 When Joshua Dawson of I Am Genie dons his mask, he embodies the spirit of giving. His foundation has granted hundreds of wishes.

Five years ago, after watching his 53-year-old father die of cancer, Joshua left his home in Montreal and took to the road in an RV. The adventure was the beginning of a wish-granting odyssey that has taken Joshua, his wife Ingrid Thornhill and their children from Montreal to Miami, Miami to L.A. and L.A. to Vancouver, with about 40 stops in between.

Soon after the journey began, Joshua and his wife launched their foundation. The concept behind I Am Genie is simple: Joshua grants wishes to people who are fighting cancer. Wishes range from meeting celebrities to skydiving to spa days to money to assist with their health needs.

Dressed as an “old-school” blue Genie in a latex mask designed by a special-effects expert, Joshua certainly turns heads — and makes things happen. I Am Genie has granted hundreds of wishes, worth more than $1 million.

Joshua says doing this makes him feel connected to his father.On his journey, he navigates by intuition. “I definitely feel led in this — and sometimes I feel pushed,” he laughs.

It’s a very different life than he led prior to his father’s death. Then, he was an entrepreneur and investment advisor who sold his first business at age 30.

“I was egotistical,” he says, “a different person. I’d never thought about death but to watch your father die, it’s traumatic. I remember wondering ‘what is my purpose?’ then feeling his spirit go through me. From that point, changing my life was not an option. I had to do it.”

On October 10, 2015, I Am Genie welcomed Deepak Chopra to Victoria for a Wishes Fulfilled event. Opening the event, Joshua announced that after five years of living without a permanent home, he and his family have are settling in Victoria. An I Am Genie reality show is in planning.

The Spirit That Spreads
A study by Nicholas Christakis of Harvard and James Fowler of the University of California, published in 2010 in the Proceedings of the National Academy of Science, reveals that an act of generosity by one person inspires those who witness the act to behave generously in the future. This generosity spreads from person to person — by three degrees — influencing dozens and even hundreds of others, both friends and strangers.

And so we come back to the story of 10-year-old Maya, who holds her birthday party at the SPCA and thinks of becoming a nurse one day. And Pamela, who devotes her life to helping animals who need loving homes. And a blue genie who grants wishes.

Each one of them touches the lives of others in an ever-widening circle. What starts with one becomes many. The spirit of giving continues.

Paying It Forward
There are many people and organizations requiring assistance this holiday season — and all year round. Your act of kindness can be as simple as buying a hot chocolate on a cold day for someone who is homeless or ensuring an elderly neighbour isn’t alone for the holiday dinner. It could be buying a gift for a child in need or delivering a bag of food to the food bank. Or maybe you want to volunteer your time. If you want to help and aren’t sure where to begin, start by contacting an organization whose work you feel passionate about and asking how you can help and what they need.

If you have been inspired by the stories of Maya, Pamela and Joshua, here are the websites of the organizations to which they belong:

I Am Genie Foundation: iamgenie.org