The French are known for their under-styled elegance, which plays surprisingly well here on the West Coast. YAM brings you inspiration and advice to achieve that ‘je ne sais quoi’ in your home. 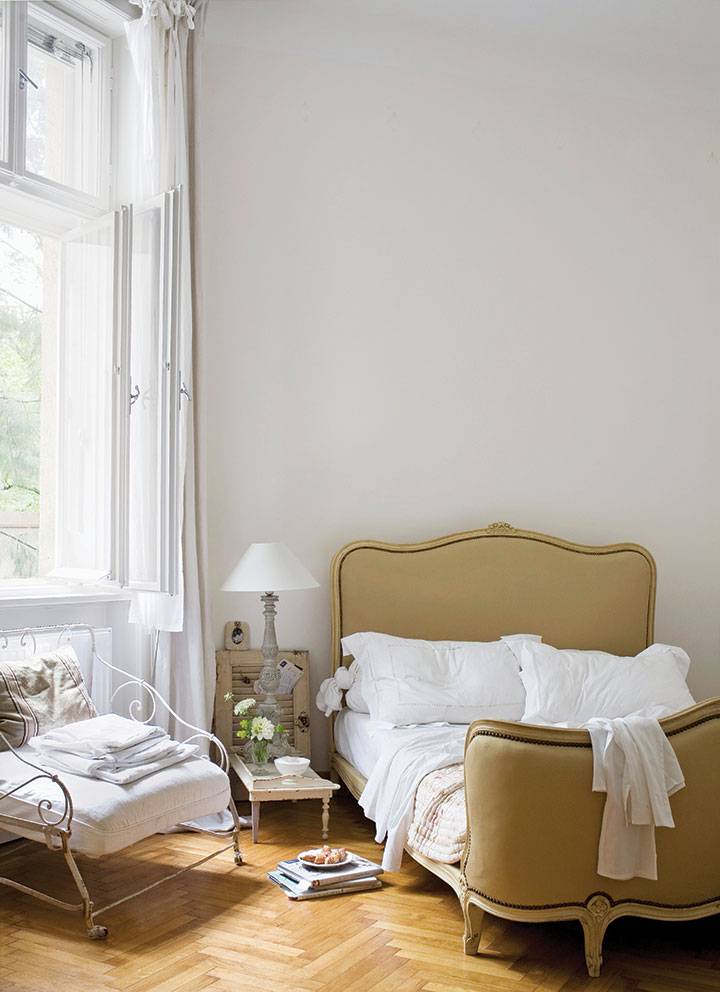 Soft harmonious colours are well balanced with the natural textures and antiques in this French-inspired bedroom. PHOTO: CHRISTINE BAUER

If a Parisian-inspired room could talk, designer Lana Lounsbury believes the words “I just woke up like this” would capture its spirit.

Think tousled linens, layers of plush throws, curtains hanging casually off a tall window, etched flooring betraying years of wear and a rumpled rug laying a pathway into the room. One painted bookshelf with a handful of favourite titles is gathered to the corner, a white geranium in a brass vase perched on its top. Two pillows carelessly decorate a bedside chair, and hanging just above is a perfectly-out-of-place Italian chandelier. Somehow, it all works.

You might say there isn’t a lot to this room, and you’d be right; it’s sparse, monochromatic and as mussed as a Sunday morning. Yet everything nesting here makes a statement — and it’s graceful in its freedom.

There’s a feral domesticity to French décor that’s as hard to capture as it is to imitate. But Lounsbury, principal designer at Lana Lounsbury Interiors, says it can be done. She’s been captivated by the look since she was a budding designer, when a mentor introduced her to the principles of French design. The trick is to do less — much less.

“The French celebrate economy in everything, and yet there is luxury,” she says. “They care about art, but not their kitchen cabinets. They care about their homes, but they don’t fill them with thousands of objects. You won’t see a space in France that looks overly decorated — there’s an organic feel, like it just came together on its own.”

Lounsbury points out that in Western culture, we quickly get caught up in the “perfect” image, with straight lines, parallel patterns, furniture that matches and cohesion throughout the house. In France, only favourite items are kept, passed down or purchased at garage sales. It makes for an eclectic milieu, but a hard one to recreate authentically.

The best place to start, according to Lounsbury, is with the bones: the pre-existing architecture of the house. If your home has any natural elements, like stone flooring, a ceiling with exposed wood, a brick wall or Venetian plaster, showcase these “rough” spots. You don’t need a lot of space to pull off the French look, though you do need some height. Lounsbury spent five weeks in Paris and discovered the biggest difference between the regions was the use of space. Floors also become a decoration in themselves, from elaborately patterned woodwork in the dining room to the classic flagstone in the powder room.

“In France, everything is skinny and tall. You’ll see 200-square-foot apartments with 11-foot ceilings,” she says. “The floors have texture, because many of these buildings have lived through eons of history, so sometimes they’re rough and gouged, refinished and worn again. You’ll see floors laid in herringbone, or on an angle, or shifting from wood to stone in different rooms.”

Next, focus on the room’s natural centrepieces: a highly designed fireplace, a crystal chandelier or an oversize gold-framed piece of art leaning against the wall. These items become the focal point, with everything built up around them. But, in typical French fashion, don’t get too committed to one look.

“It’s not just one idea — it’s all of them,” says Lounsbury. “In a true French kitchen, instead of plain white, you’d see Italian influences, separate pieces of cabinetry, open shelving, hanging pots and appliances spaced so separately they almost have their own section of the kitchen.”

Lounsbury never saw a pantry in any Parisian home. With a culture that celebrates the freshness of markets and the pleasure of desire, she thinks this reflects a “pick what you need, when you need it” mentality. 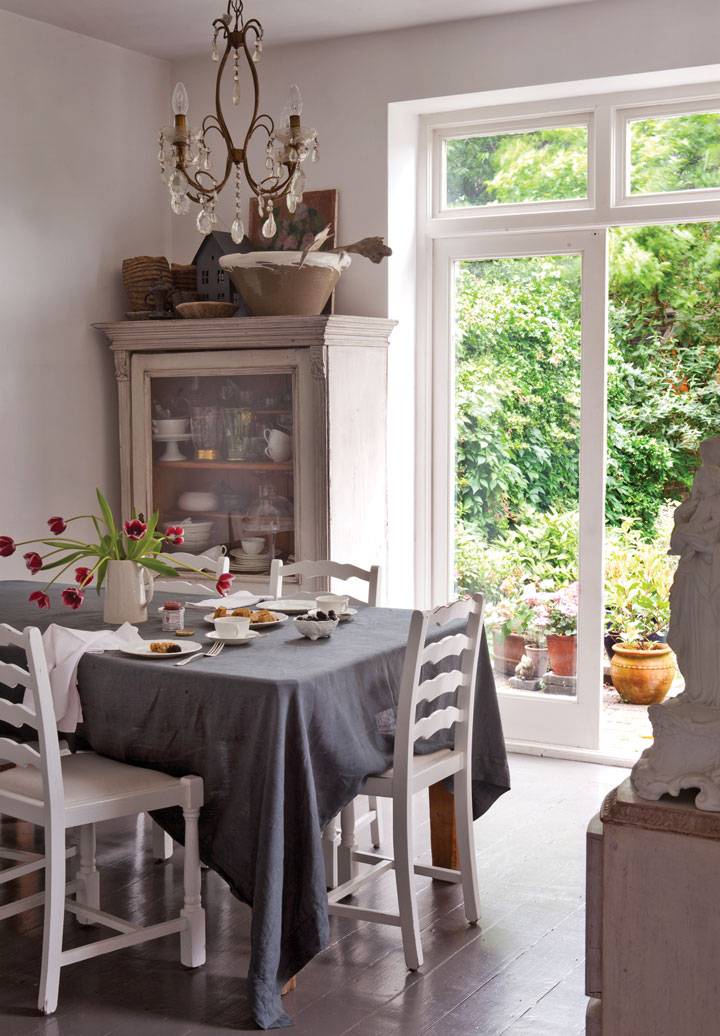 When it comes to sculpting the French bedroom, Pinterest provides rich inspiration, with stylish images of cottage-white rooms, exquisitely decorated. The key to a real French look, however, is keeping it eclectic.

A few pillars will guide you: use natural linens with plenty of layers, play up the feminine with delicate eyelet lace, and use texture to build the room — nubbly rugs, puckered duvets, pillows and plushy throws.

In the casual country style, colours are often in monochromatic creams and whites, with an accent of colour found on a bookshelf or in a beloved chair. Tables are mismatched and often painted, and a few treasured objects adorn the space. The bed frame is made from iron or brass, but it could also be a platform mattress or a four-post bed, with pillows stacked and blankets hastily arranged.

“The main thing is that this space looks lived in,” says Lounsbury. “It’s chic, not glam — there are no matching end tables, smooth bedsheets, bright metals or sparkles (except maybe the chandelier) and it feels comfortable. It’s a place you wouldn’t mind spending your time.”

Though “French country” with its monochromatic whites and easy nature is often what people picture when they consider the look, French décor tendrils itself in a few directions. Old-world France plays up the Château style, with the gilt sheen of gold motifs and a nearly over-the-top reverence for luxury antiques. It’s a “just less than cluttered” look, though here the mismatched nature takes on a collector’s feel.

Meanwhile, modern French style pulls colour back into its palette, with bold oranges, blues, greens and reds contrasting a familiar theme of greys and whites. In modern style, there’s no obsession with the past, but that “thrown together” look is pervasive.

It can be described as a “just moved in” or “just moving out” look. Artwork, for example, is found throughout the house, but is seemingly abandoned on the floor, leaning against a couch or bookshelf, even stacked.

Then there’s the new-world collaborative French theme, which Janice Long, principal designer of Calla Design, is particularly keen on. Long plays with a French-Asian fusion, toying with bold colours and a spark of glam beside embroidered textures and beaded fabrics.

“All you need is one jumping-off point to get started: a favourite colour, a fabric that catches your eye. It doesn’t have to be a lot, but it can transform your home,” she says.

Long helps clients create their own fusion looks, combining everything from classic country coastal to minimalist old-world ranch or Asian gilt modern. The looks are endless. As France is famous for its flea-market finds, Long also helps people source one-of-a-kind treasures to complete their homes.

“I love the richness you find from blending styles,” Long says. “It creates an upscale, classic appearance, and it’s very French this way: everything comes together, just so. You only have to decide on your focus — how much of one pattern, or one colour, can you take?” 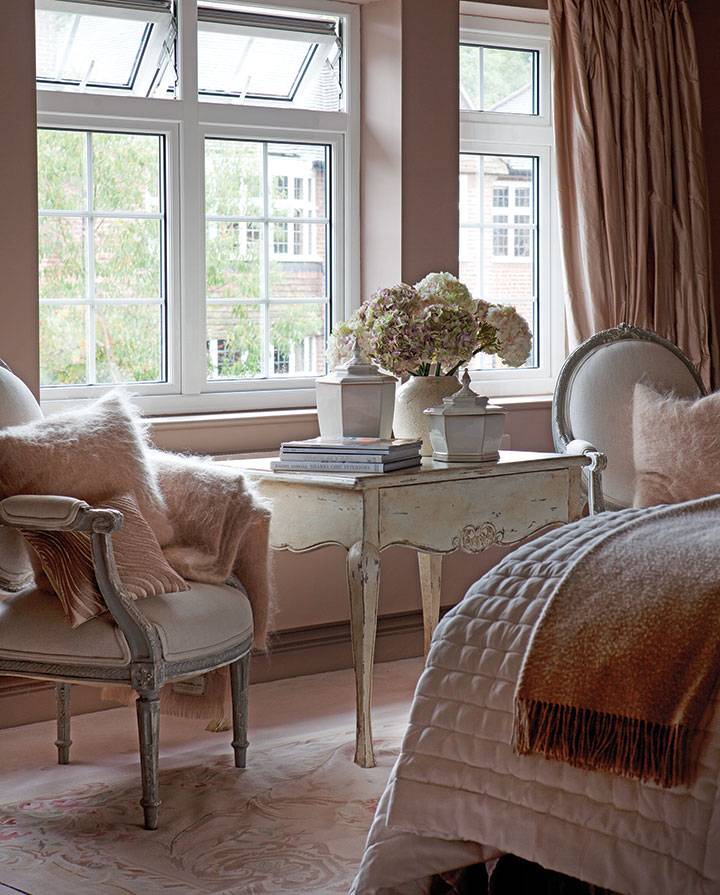 A bedroom in the French style from The Creative Home by Geraldine James, from CICO Books. PHOTO: ANNE & PETER RIVETT

HOW TO ACHIEVE THIS LOOK

For the spirited do-it-yourselfer, Victoria is home to a variety of shops that will help capture your own French style. French Vanilla Home and Garden offers guests everything from Parisian linens and enamel dishes to refurbished dressers and paint to create the look. Owner Sheila Stone even runs workshops on how to transform furniture pieces — and entire rooms.

“You can incorporate almost anything into French décor, but just as important is what you choose not to keep,” says Stone, who has shifted her own preferences from French-provincial, with its stately Eiffel Towers, to French-Nordic, for a rustic, woodsy approach. “The biggest take-away is that these looks aren’t fussy — they just evolve on their own, and you don’t have to be consistent.”

While Stone has spent years honing her eye, she says a few shortcuts will help: steer away from the clichés (overused landmarks, French writing and, yes, the Eiffel Tower), as you’d never see any of that in a Paris apartment. Travel to the places you want to imitate (even if it’s just through Google) to get a sense of how everything really comes together. Put yourself in your style. Above all, Stone says, create an environment that feels like “you” — Pinterest images look nice, but a room will be more meaningful when adorned with your own treasures.

“You don’t have to paint every piece of furniture, and you can mix and match with French style,” Stone says. “There’s a freedom here that we aren’t as comfortable with in Western culture. It’s a lot of fun to just play, and the imperfections are what makes it perfect.”

1  Use a mineral-based furniture paint
Mineral paints won’t soak into the wood, and they leave a waxy finish, meaning your piece comes out looking catalogue-worthy.

2  Sand if necessary
Depending on the piece, sand first to help the colour set on your furniture.

3  Find the right white
While the French-country look doesn’t boast a lot of colour, a Parisian-inspired white contains just a whisper of pink.

4  Don’t be too perfect
The messy, scuffed look is part of the Parisian charm — don’t spend too much time getting everything even.

5  Texturize it
After the paint has dried, use a sheet of sandpaper to gently distress the finished project, as much or as little as you like.