Esi Edugyan, author of the novel Washington Black, has won this year’s $100,000 Scotiabank Giller Prize — the second Giller win for the Victoria-based writer. Earlier this year, YAM sat down with Edugyan to talk about inspiration, the writing process and balancing life with two writers in the family. 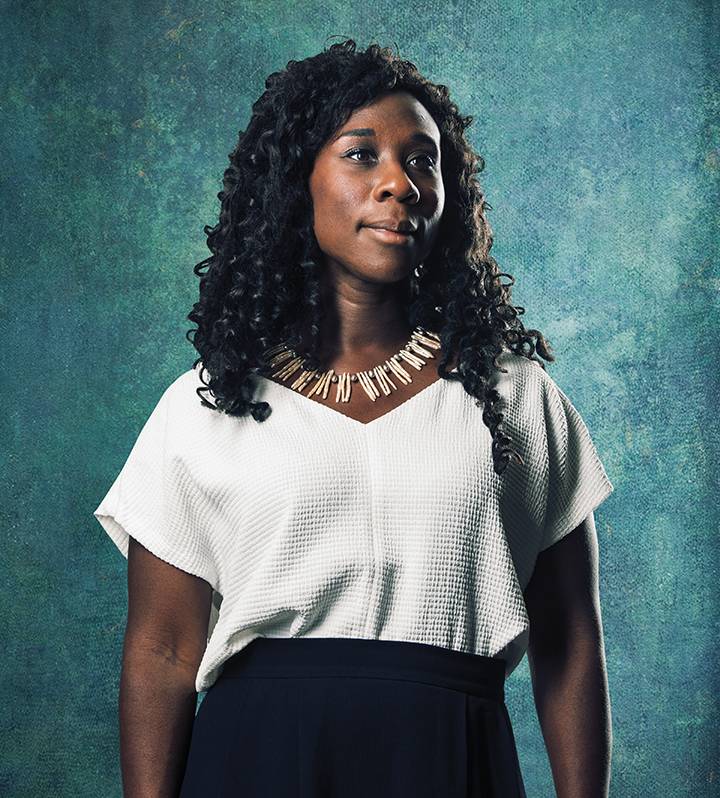 As Esi Edugyan sips tea at a Metchosin café, her composure is both calming and inspiring. She responds thoughtfully to questions and has no fear of the silence created by her consideration, nor does she have any apparent urgent need to fill it. She looks you right in the eye, smiles easily and punctuates her answers (and her questions) with a velvety laugh.

Edugyan’s serene mien is hard to reconcile with the scenes of casual cruelty and violence in her new novel Washington Black, the story of an 11-year-old enslaved on a circa-1830s Barbados plantation.

When young “Wash” is chosen as manservant to Christopher Wilde (“Titch”), one of the plantation’s new English masters, his fear meets fascination as he discovers that Wilde is both an abolitionist and an inventor with dreams of creating a more egalitarian society — and a flying machine. But when a man is killed and a bounty is placed on Washington’s head, Wilde must choose between family and Washington’s life.

Published this fall, Washington Black was short-listed for the prestigious Man Booker international literary prize. Judges called Washington Black “a dazzling exploration of race in the Atlantic world, which also manages to be a yarn and a chase story.” The novel was also short-listed for the Rogers Writer’s Trust Fiction Prize and the Scotiabank Giller Prize. On November 19, Edugyan won the $100,000 Scotiabank Giller Prize — the second Giller win for the Victoria-based writer.

(Her earlier novel, Half-Blood Blues, was also awarded the Scotiabank Giller Prize, the Governor General’s Literary Award and several other distinguished awards, as well as being short-listed for the Man Booker.)

The daughter of immigrant parents from Ghana, Edugyan was born in Calgary in 1977 and grew up there until she was 17, when she came to Victoria to attend UVic and studied creative writing with Canadian writer Jack Hodgins. There, she met her husband, Canadian poet and novelist Steven Price, whose 2016 novel By Gaslight was longlisted for the Scotiabank Giller Prize. She did a master’s degree at Johns Hopkins University in Maryland, as well as writing residencies in locales as diverse as Iceland and Stuttgart, Germany.

It wasn’t until 2006 that she had the opportunity to visit Ghana and connect with her ancestry and the country’s past and the history of colonial slavery.

Her inspiration for writing Washington Black: “At first I thought I was writing a novel about the Tichborne case, one of the longest-running criminal trials in British history,” she says of the infamous case involving an apparent impostor claiming to be the missing Tichborne heir.

“I wanted to tell it from the perspective of an ex-slave who’d been a servant in the Tichborne home and who later became the defense’s main witness.”

“But almost as soon as I began,” she adds, “the story wanted to go a different way, to explore the experiences of a slave in his boyhood — his relationships, his release into freedom, the complicated positions he’d find himself in, racially, socially, and intellectually.”

Why she describes Washington Black as a post-slavery narrative: “It’s about what happens after, what do you do with your life, what do you make of it, how do you begin to know how to have a sense of self … and how do you try to live in the world when everything you know has been blood and violence and … you’re in a world that rejects you.”

Why she confronted the violence, inhumanity and injustice of slavery head on in Washington Black: “You can’t flinch away from it,” she says. “You can’t not depict these things; you have to show the intensity of the violence.”

Why young “Wash” is her favourite character in the novel: “It’s so focused on him and his maturation to manhood, so tightly focused on him for those seven years; his thoughts, his feelings. I just felt very connected to that,” she says, adding that she is also fond of “Titch,” the inventor, naturalist and abolitionist.

“I think in a lot of ways [Titch] was astonishing for his time. The abolitionists were astonishing. To have been able to change their thinking, to change a nation’s thinking, about how certain goods [such as sugar] that people took for granted were acquired. For them to recognize the injustice, and [to] change … was a huge marker in the progress of humanity.”

How being a mother impacted her work on the novel: “I couldn’t think too intensely of my own children when writing [the novel]; it would have been too painful. Being a mother does play into it, because you have this sense of just how horrific that would be, to be with a child who’s also enslaved, and there’s nothing you can do for either of your fates, especially the child’s fate. I couldn’t put my own children in that place, mentally. You do, but then you have to come out of it. You don’t want to think about it too intensely. It’s such a painful, painful thing.”

“I keep using the word ‘painful,’ ” she adds, “because it was painful, but it was really important for me to show [Wash] finding his way out of this.”

Why starting a novel is the hardest part for her: “It’s always so hard to find something that’s good enough to build the basis of a whole book on,” she says. “Once I get started, until about three-quarters of the way through the book, it feels like a big push … but then the last quarter of the book is like a rush, I can’t write fast enough. This is when I start writing day and night. It’s exhausting, but it has to get done.”

Why she doesn’t create outlines for her novels:  “I just start writing,” she says, noting that every novel involves stacks of notebooks where she works out timelines in longhand. As for developing an outline, she says she doesn’t bother because she knows she “will never stick by it.”

In fact, Washington Black actually had several different endings, says Edugyan: “So much material got thrown out.”

How having children has made her writing time feel “very precious”: Two writers in a household with two children and very busy lives could be a recipe for not getting much work done. But Edugyan and Price have found a rhythm. “[Before kids] I feel like I didn’t have much structure to my schedule,” she says. “It would take me forever to get started on a book … and then finishing the book. I might work 12 hours a day, have dinner whenever, then watch a movie then go back and work. But you can’t do that when you have kids. You’ve got those five hours, and that’s pretty much it.”

Who she trusts to show her work to: Edugyan says Price is the only one who knows what she’s writing about and “the only one I show it to before it’s finished.”

And so, anyone hoping for a hint about her next novel, will just have to endure the suspense.