It is little surprise that wood — and the ways it would be used — received careful contemplation when Hamish Kimmins and his wife Annie built their West Coast home on Denman Island. Hamish spent his career as a forest ecologist, instilling sustainable forest management practices in his students who studied under him when he was a professor at the University of British Columbia. His contributions to the field were celebrated when he was appointed to the Order of Canada in 2014. 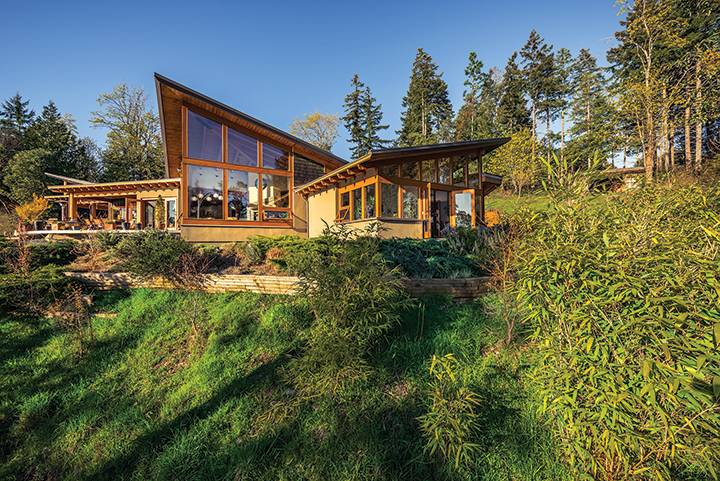 Board-and-batten and stucco with acrylic topping are married for a low-maintenance exterior while the charcoal-grey standing seam metal roof promises 40 years will pass before it will need replacing.

The natural, forested setting overlooking the ocean to Vancouver Island signalled that wood should be a dominant feature in the home. But the couple also wanted to minimize the impact on forests in the construction. And they have done that, without diminishing the warm embrace that wood brings to a home.

“We didn’t use any pre-cut lumber to build the house,” Hamish says. Instead they used recycled wood, including an 800-year-old timber that served time as a stringer on a forestry bridge now being reconstructed using steel. The magnificent specimen, seven feet in diameter and approximately 52 feet long, was cut on site into gleaming fine-grain, knot- and resin pocket-free beams worthy of being showpieces in a Japanese temple. 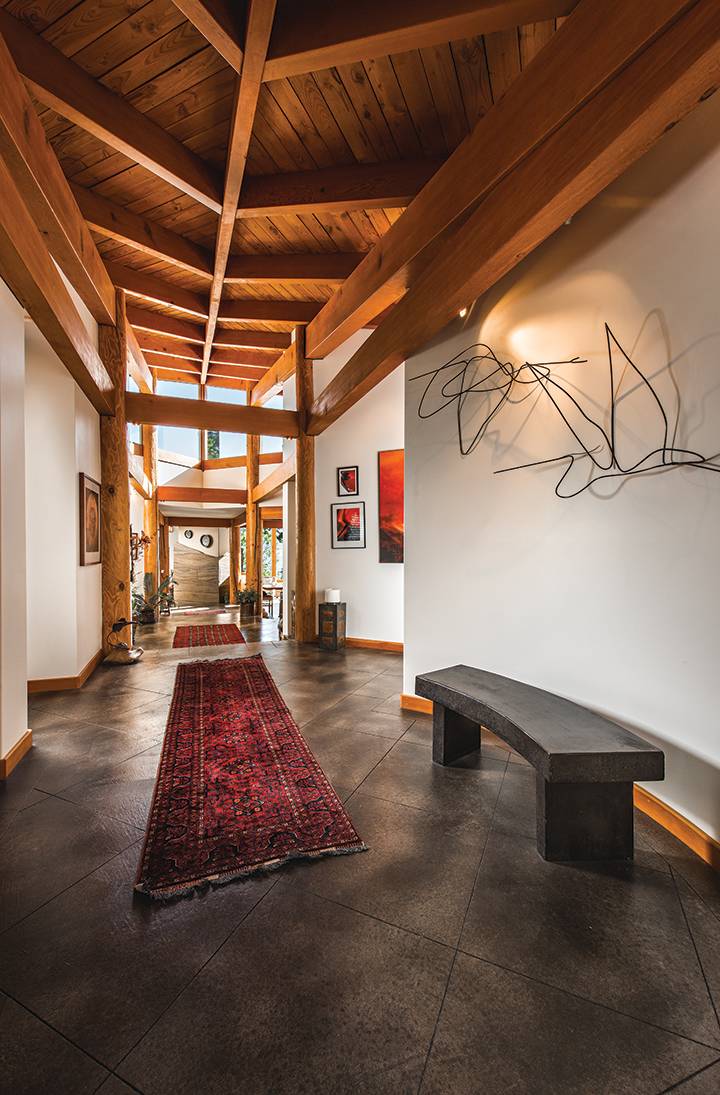 The overall design of the home, with its angled rooms and dramatic vaulted wood ceilings, creates a sense of arrows pointing to new vistas in every direction.

There was special pleasure in personally selecting the log from the Canfor Forest Products site near Woss, taking the time to count all 800 rings in the reclaimed log.

Rejected telephone poles, sourced from Courtenay’s Chinook Forest Products and lathed to reveal swirls of natural grain and knots, were used for supporting timbers while the 60-year-old second-growth trees that had to be taken down because they stood where the house is now were used in the ceiling planking.

Falling House, named for its cascading design down the gentle slope of the property, minimized traditional framing through the use of cost-effective insulated concrete forms for much of the foundation, lending strength, stability and thermal efficiency to the project perched on a slope.

The design of the 2,800-square-foot, two-bedroom home is officially credited to Etienne de Villiers of Etienne Design, a local builder-designer who is sought after on Denman Island, Hornby Island and Vancouver Island. But de Villiers is quick to pass credit back to Annie for redirecting the design approach to the home. Initially, he and Hamish pored over concepts, coming up with towering ideas for the property which prompted Annie to send him back to the drawing board “and I’m glad she did.”

Today, the home, designed as a series of dart-like structures pointing in different directions, is uniquely and perfectly nestled on its surrounding land as if it was always meant to be there. Standing at the home’s threshold, the dart design naturally draws the visitor’s eye deeper into the interior and beyond to the ocean. While often a commanding ocean view can take attention away from a home’s interior, here a combination of curves and angles work together to create a dynamic yet harmonious interior where the eye wants to linger.

Annie calls the home simple inside but with a complicated design, an apt description and a reason why the home functions well yet remains so esthetically pleasing. 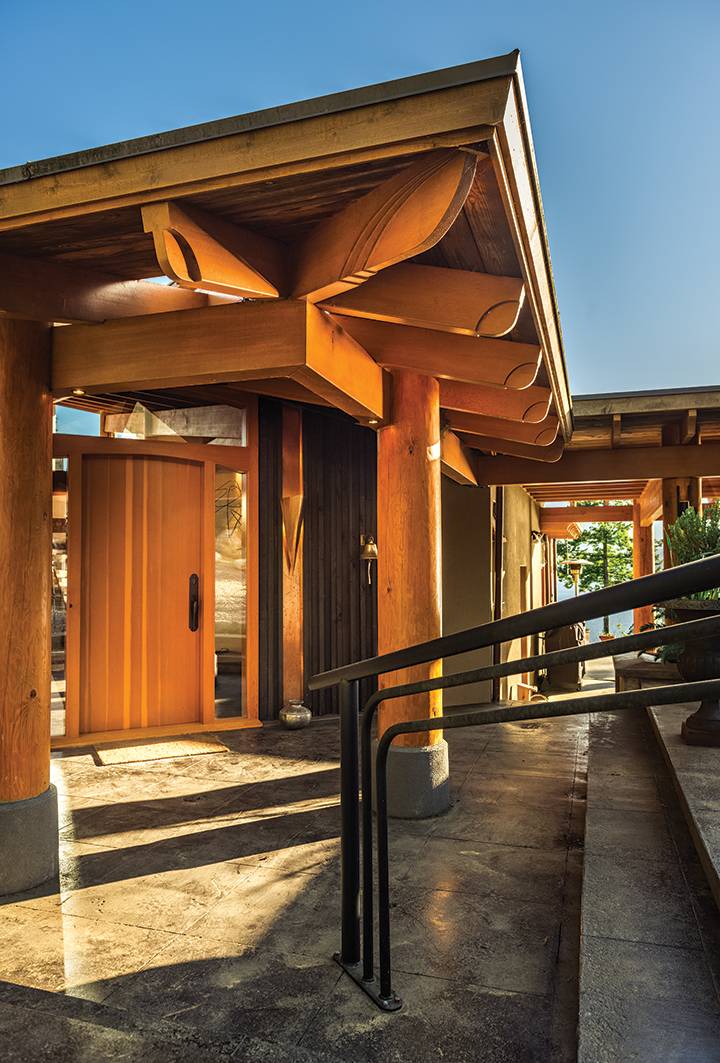 A dramatic entrance punctuated by angles and magnificent wood pillars creates a powerful statement for the home, in which wood is part of its signature.

The flow of the home, with private spaces such as bedrooms, office/libraries and an after studio on the left, and the public spaces like the living room, kitchen and powder room to the right, feels natural, intuitive and, most important to the owners, comfortable.

Specializing in West Coast design, de Villiers categorizes Falling House as a modern home, but it’s one that will stand the test of time to become an enduring classic. “Styles of architecture do date themselves, but the most successful houses stay current.… The Kimmins’ home is almost a piece of art in itself.” 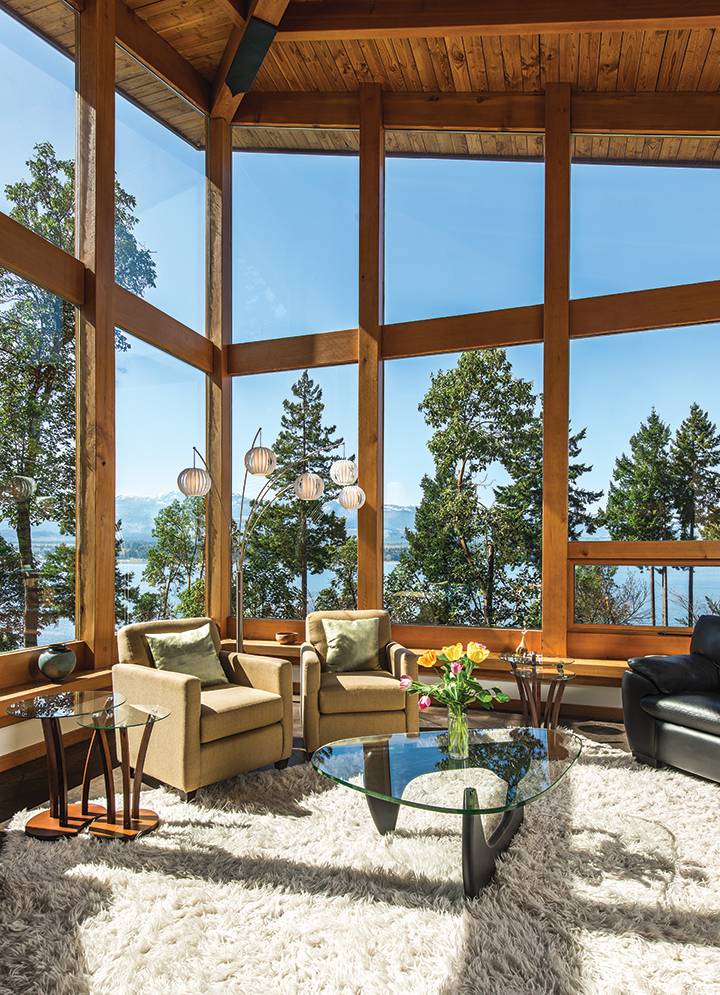 Vaulted ceilings point to a picturesque view from a living room set up for casual comforts and conversational ease. 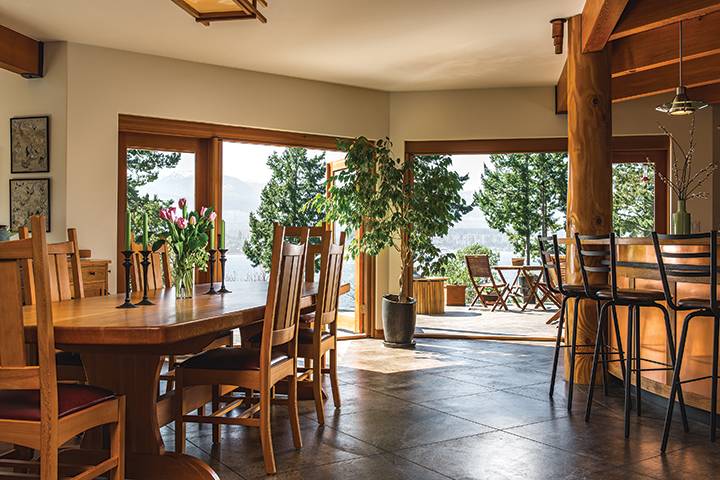 A custom-made table, purposely left with an unfinished surface for cleaning ease, sits on radiant-heated concrete floors that are comfortable in bare feet. Acid-stained with black, the floor has the patina of well-worn leather. 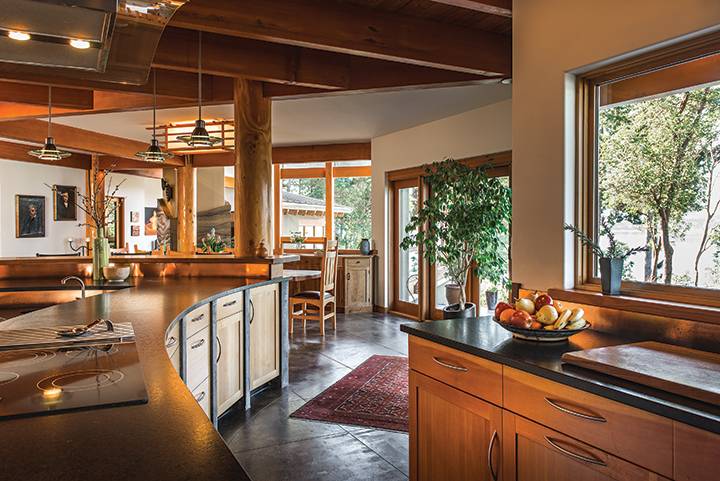 Seven is Annie’s lucky number and, looking closely, it is the shape of the curved kitchen island. Flame-cut granite is used for the countertop. Treated with a blow torch, it has a soft matte finish and cuts any glare that would come from the expanse of oceanfront windows. 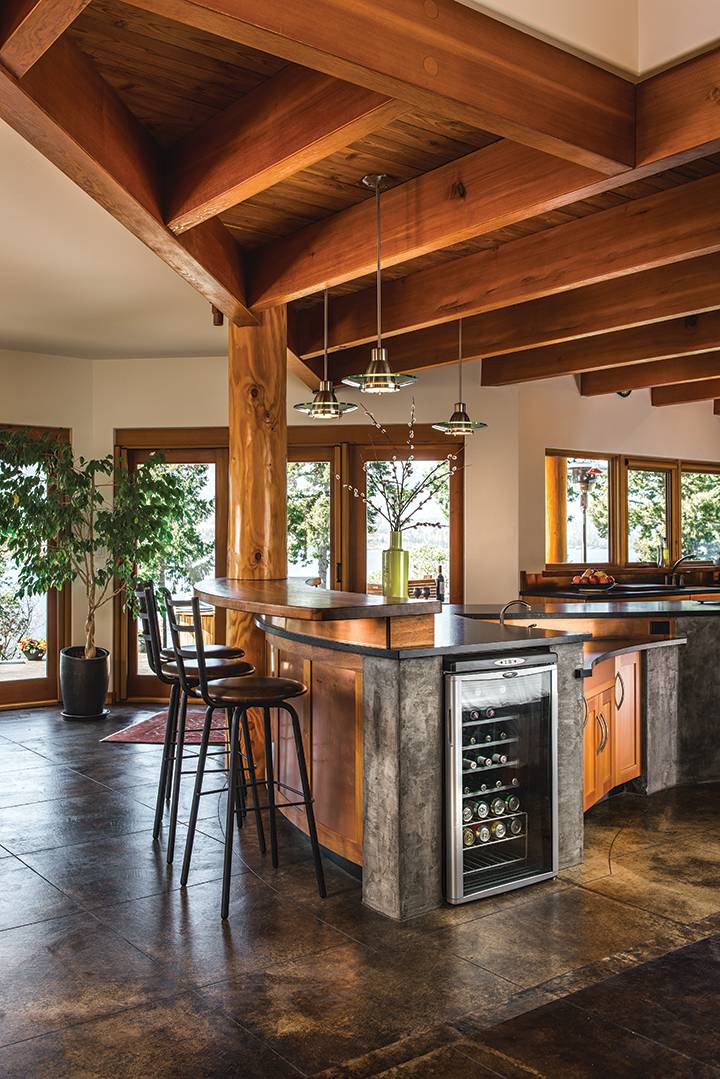 Panels of copper accent the cabinetry below the counter and were chosen over stainless steel to add warmth to the area. Laminated strips of black walnut have been shaped into a gentle arc, creating a comfortable island to sit at near the kitchen action. Inexpensive concrete forms in the cabinetry add an element of surprise and textural interest. 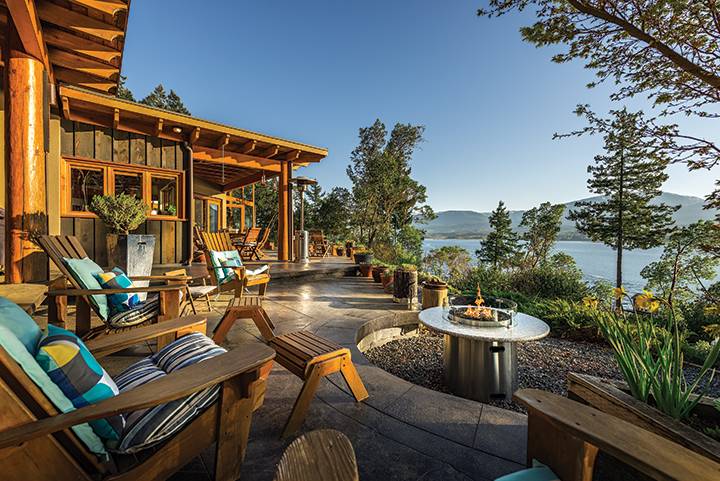 A wraparound concrete patio is actually the top of the required water cistern and becomes an extension of the home, which has a breathtaking view across to Vancouver Island.