Local Choirs are uniting communities and bringing Victoria together 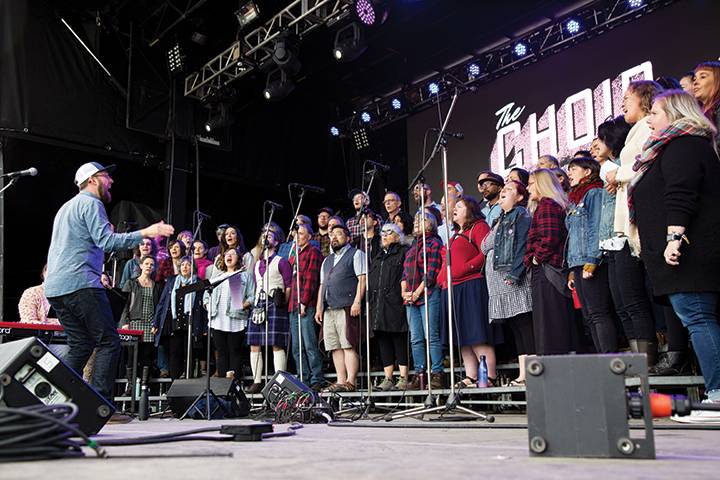 Marc Jenkins, musician and full-time choir director, stands in front of 80 people at a rehearsal with The Choir. Wearing a graphic tee, jean shorts and a baseball cap inscribed with The Choir’s logo, he leads the group into their next song, bouncing up and down in time with the music. It’s been five weeks since the group last practiced, but you can’t tell.

The Choir is what’s known as a pop choir, named for their modern and often alternative repertoire. Instead of Handel, think Hozier. Instead of Bach, think Bowie.

Jenkins was a manager at the Larsen Music retail store when the idea of organizing a community pop choir was raised in 2014. He distinctly remembers the first rehearsal. He and other organizers printed off 30 or so songbooks, pushed the racks of acoustic guitars and ukuleles to the walls and waited for a few dozen people to show up. Instead, 80 people showed up.

“I remember running around, so sweaty, handing out photocopies of the music,” Jenkins says. “We were totally overwhelmed.”

He had discovered one of Victoria’s secrets — people here crave choirs.

Four years later, The Choir has a waitlist of around 200 people (and that’s after Jenkins started a second choir, The Chorus, to try and accommodate demand).

The Choir’s membership is diverse, but most members tend to be either 30-to-40-year-old white-collar professionals or arts, education and health-care workers. At the rehearsal, members chat and giggle with one another like middle-school kids with trendy tattoos, mom jeans and Birkenstocks, but as soon as the piano starts, they quiet down, focus in and start harmonizing.

I spend time talking with Jenkins at Little June, a coffee shop located in the shadow of the Belfry Theatre, once the Emmanuel Baptist Church of Fernwood. It’s a fitting place to talk, because just as the Belfry went from pews to theatre performances, choirs have taken on their own shiny and secular transformation. As choir director, Jenkins witnessed firsthand the cultural change choirs have gone through in recent years. They’re no longer just for groups of retirees who cram around an out-of-tune piano in a church basement and sing hymns (although these choirs haven’t gone anywhere). Now, they’re vibrant, accessible and everywhere.

And a survey released by Choral Canada and the Canada Council for the Arts in 2017 supports what he says. It found more Canadians were in choirs than there were
on hockey teams (almost 50 per cent more, in fact).

Victoria is no exception to the rule. Choirs are springing up around the city like bike lanes, and they possess a variety that matches the city’s own diversity. Want to listen to a high-quality chamber choir? There are five or six to choose from. More interested in a large-scale modern outfit? Try seven or eight.

So much of the popularity explosion of choirs has to do with a level of accessibility that did not always exist. Now, for many newer choirs, you don’t even need to know how to read music. These choirs are non-auditioned, non-judgemental and attractive to a much larger group of people.

Anne Schaefer, a choir director and musician in Victoria, compares it to cycling. Some people cycle professionally, but almost everybody can ride a bike.

“And we’re remembering that. Instead of making it exclusive, we’re now creating ways to make it totally inclusive,” Schaefer says.

While the idea of accessibility is growing, it’s not new. In Victoria, its champions are Siobhan Robinsong and Denis Donnelly. 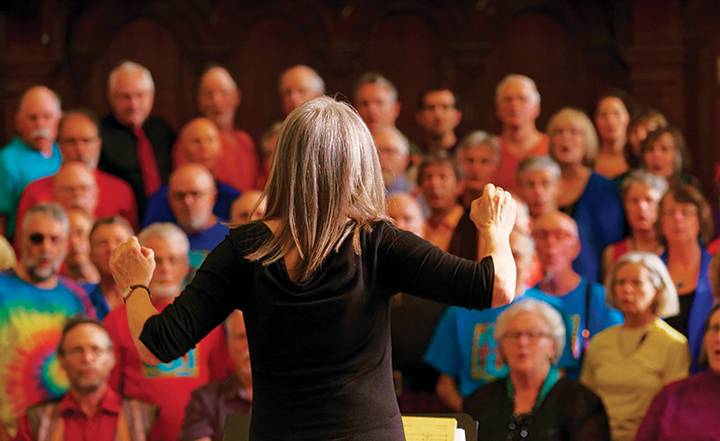 For Robinsong started directing choirs on Cortes Island, and when she came to Victoria in 1996,

her friends encouraged her to tackle the lack of non-auditioned choirs. She focused on those who couldn’t read music and those who had been told from a young age that they couldn’t sing.

“I even put out, ‘If you’ve been told you can’t sing, please come out to this choir,’” Robinsong laughs. “I’d spent a lot of my life thinking that I was no good as a singer, and I had gotten over that and realized that whole idea was just nonsense — and that everybody can sing. That was the big difference.”

Choirs provide a protection for those lacking confidence in their voices, and the shared vulnerability makes for incredibly strong connections. There may be no better way to understand someone than by singing with them, Jenkins says.

“You might not even know the person you’re standing with,” he explains. “Sure, you might know their job. You might know if they have a kid or not. But you don’t really know them.

“But you’ve heard their voice sing proudly and strongly, sing weak with a quiver, sing wrong, sing beautifully, sing poorly, sing emotionally ragged. You’ve heard this wide range of emotions. So you really do know them.”

(Robinsong wrote to Archbishop Desmond Tutu, from whom she’d heard the term, asking for his permission to use it. He replied in an email — now framed on Robinsong’s wall — saying it was a splendid notion.)

That idea of identity through connection — of a single entity made possible by a multitude of entities — befits choirs perfectly, and the choir members I speak to proudly and loudly proclaim its effects.

“You feel good,” says Kim Charlton, a member of The Choir who was waitlisted for two years before joining. “Even the days when I’ve had a really rough day at work, and I’m like, ‘Can I really find the energy to go?’ I’ll drag myself here. Ten minutes in, I’m revitalized and I go home with a smile on my face.”

Holly Allan, another Choir member, echoes the sentiment. “It’s enriched my life. It’s made me a better person. I feel happier and brighter. I feel like I carry myself differently,” Allan tells me. “That’s such an incredible thing to get from The Choir that I didn’t think I was going to get.”

Ted Woynillowicz joined the Gettin’ Higher Choir having no experience in singing at all. “But after five years of singing in the choir, one can’t fathom what it would be like not singing,” he says.

There are a few reasons why Victoria itself might be such a hotbed for choirs.

For one, Victoria has plenty of artists and creative individuals, and plenty of performance and rehearsal spaces. Jenkins theorizes that because so few big concerts come to town, Victorians have to take the concerts into their own hands. 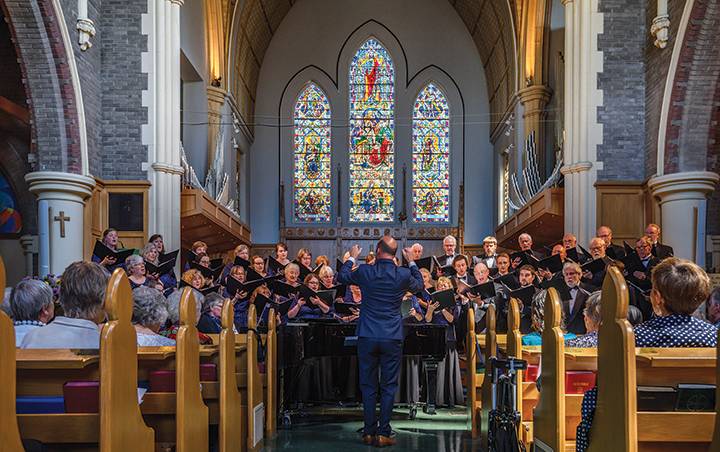 Brian Wismath, music director of several local choirs including the Linden Singers, thinks Victorians are passionate and entrepreneurial people; once they find a cause to commit themselves to, he says, they dive in wholeheartedly. This is so much the case, Wismath says, that he often has trouble making sure his choirs’ performances don’t conflict with the dozens of others around the city.

Whatever the reasons, nobody that I talked to sees choirs’ popularity as a fleeting trend — humans have sung for centuries and will continue to sing for centuries more, no matter what.

“It’s such strong medicine,” Robinsong says. “I think it’s having its day [in] the way eating well is having its day. Are we going to go back to eating crap food? I don’t think so. We’ve learned something about that, that it’s healthier and makes us feel better. It’s the same with music. I think it’s here to stay.”

If you’re interested in joining a choir, your options have never been more plentiful. Some of these choirs have fees, and several are on a financial sliding scale.

Both The Choir and The Chorus, Marc Jenkins’s two choirs, are accepting waitlist sign-ups on their respective websites. Jenkins also leads ALL TOGETHER NOW!, a drop-in choir that meets periodically to learn and perform songs over the course of the evening.

Interested in singing in the daytime? Siobhan Robinsong’s new choir High Noon begins their winter-season session orientation on January 8, and members can expect to sing anything from contemporary music to African freedom songs. All sessions begin at 12 p.m.

The Collective, run by Anne Schaefer, and the Pandora Chorus, run by Glenna Garramone, are also accepting members for January sessions. These pop choirs don’t require any previous experience.

If you’d prefer an auditioned choir, Brian Wismath’s Linden Singers tackles repertoire from the Renaissance to the 21st century. They are currently in the middle of a session, which runs from September to May/June.