If decorating with colour seems a bold move, how about hiring your interior designer over the Internet? Maybe, but Anna Shetty knew Kyla Bidgood of Bidgood and Co. was the perfect match for her new house, purchased in Victoria while her family was still living in Ontario. “Her esthetic seemed bright and fun but you could tell it was well-thought out design.” Shetty says.

“I liked her fresh perspective, and I wanted that for our family home.” 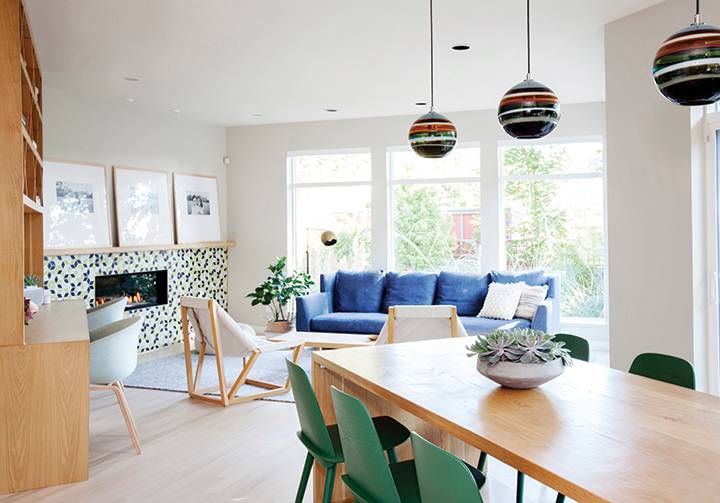 Pale neutral walls and colourful accents were used to brighten this open-concept space. In the dining area, Muuto Nerd chairs in dark green, succulents from Rook & Rose and the stone-banded orb pendants from Siemon & Salazar add pops of vibrancy.

The result? The transformed space created a home that “feels like it embodies bright colour and pattern but also a blend of restrained simplicity,” Shetty says.

With three young children, Shetty’s main focus for the refresh was a cohesive family room and dining area that led into the kitchen. She wanted the rooms to flow into each other but feel separate. “The way it was set up before, the dining table looked like it was in the family room,” she says. 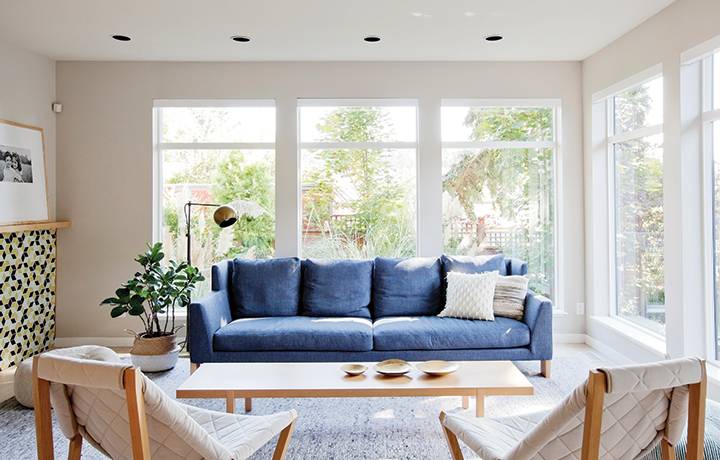 According to Kyla Bidgood, a key element to making a space feel bright is to set your anchor points and then add in other elements in complementary tones. Here, the Bensen Morgan sofa and the Salari area rug (both from Chester Fields) act as those anchors and set the palette of the space. Heath ceramic tiles add visual and geometric interest to the fireplace. The unique exposed backs of the sculptural Tenso chairs contribute to the feeling of openness and allow for room flow.

The layout of the home presented a challenge, but Bidgood worked with her colleague, Kristine Hageland, on possible concepts for the space. “We played around with several layouts before we landed on this one,” Bidgood says. “It’s very open and connected and includes a desk space, a living space and an eating area. The built-in elements were one key to tying it all together. The dining table is actually connected to the kitchen island. So rather than being freestanding, it’s an extension of the kitchen. It’s not done in the kitchen-cabinet finish but in the finish of the built-in desk area. That’s one way to create that connectivity.” 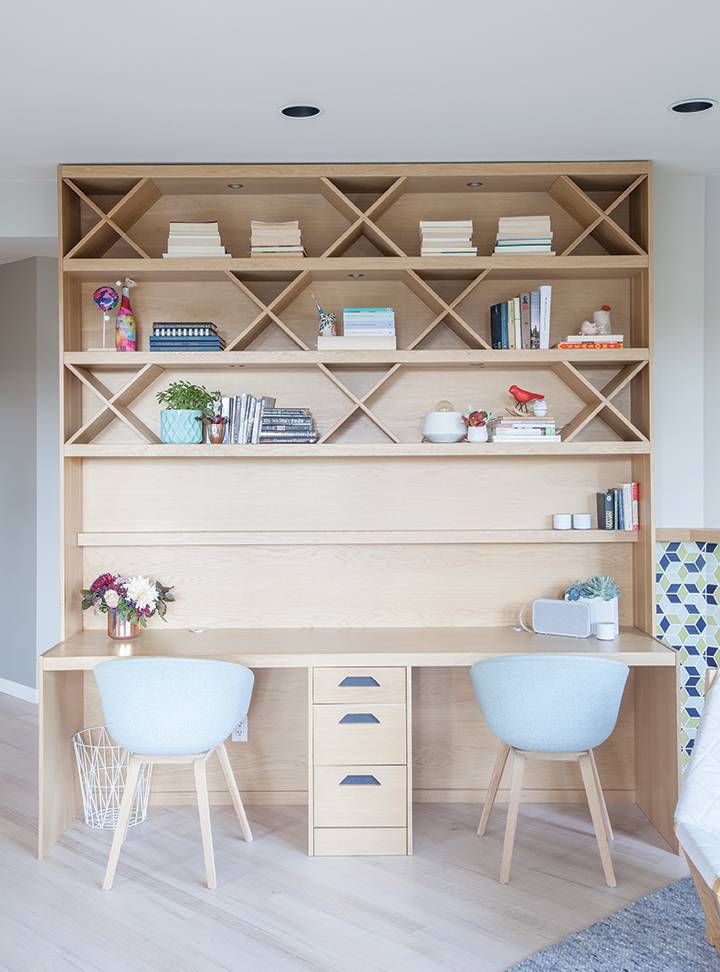 Custom built-ins, such as this white oak desk and shelving unit by Strong Construction Group, are an efficient and stylish solution in small or challenging spaces.

LIGHT, BRIGHT & EVERYTHING NICE
The refresh of the open-concept living area and the home’s smaller bedrooms embraced a rich palette. The designers were excited to work with someone who “loved the tasteful use of colour — it’s all about the balance of neutral pieces and those that draw your eye,” Hageland says.

The family needed a new sofa, so that was used as an “anchor point,” with the designers choosing a deep blue that became one of the main themes in that space’s palette. “The key thing with making a space feel bright and colourful is not everything in the space has to be bright and colourful,” Bidgood says. “If you’re going to have colourful furniture, it’s better to have neutral wall colours and play with art and accessories. And vice versa. If you’re going to have a really bold colour on the wall — like in the bedroom — pick more subdued colours for your furniture.”

There are also a few geometrics at play in the space, with a subtle repetition of pattern connecting the distinct areas, from the stitching in the sling chairs to the pattern in the tile surround of the fireplace insert to the horizon line that runs from the desk area across the fireplace. “The space has a lot of personality, but the colours and patterns don’t make it feel juvenile,” Bidgood says. “It’s definitely an adult space but also very approachable.”

A favourite element of the designers and the homeowners are the distinctive pendant light fixtures that hang down over the table. “They completely work with our colour scheme,” Shetty says. “They don’t give off a ton of light, but we always put them on because they add a touch we really appreciate. There is so much cohesiveness to the space.” 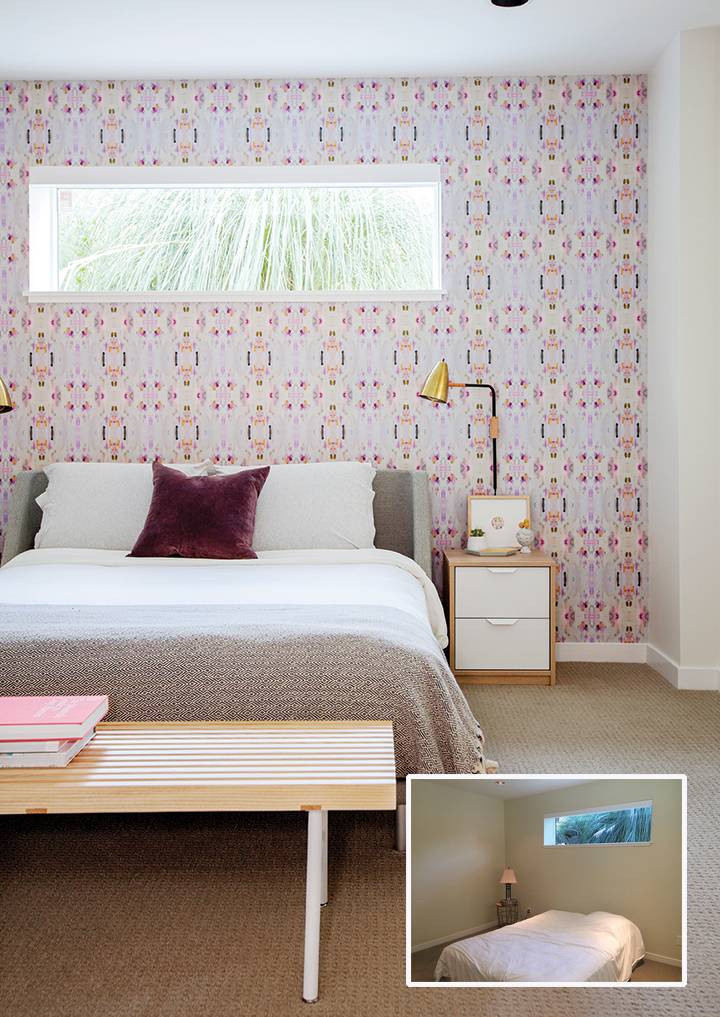 Before and after: Another way to add brightness is to bring colour and pattern to the walls while choosing neutral furniture and accents. In the guest bedroom ­— which will eventually become a little girl’s room — custom wallpaper was created by artist Lauren Mycroft, graphic artist Sarah McNeil and Kyla Bidgood. 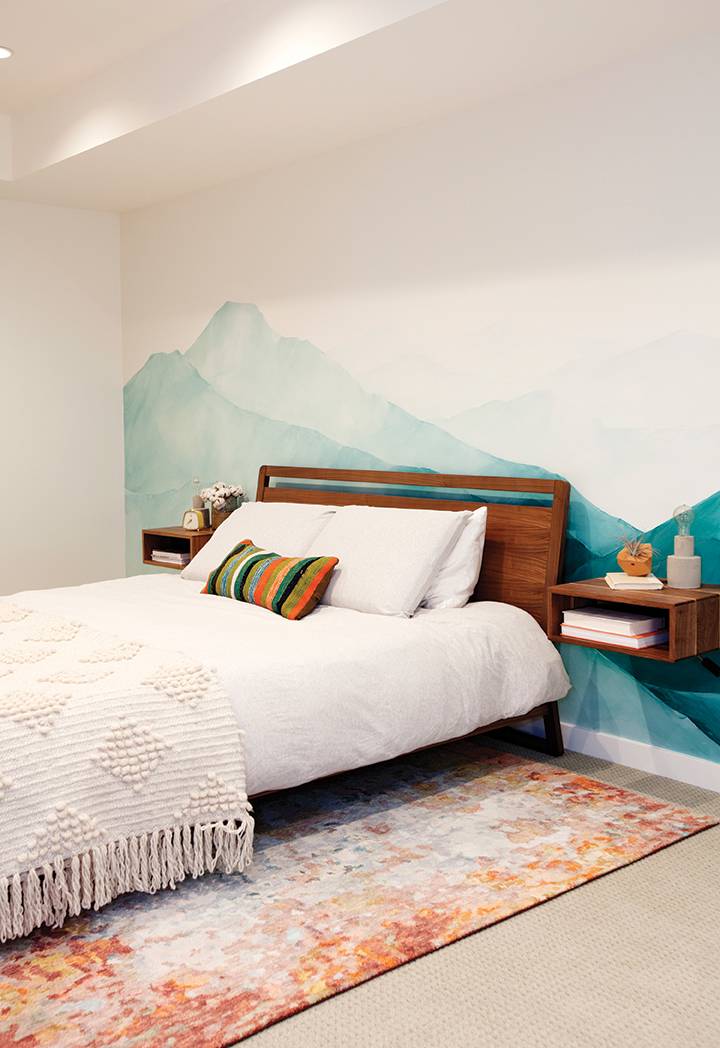 A second bedroom is given a wash of colour with a custom wall mural by Lauren Mycroft.