From baba ghanouj to shawarma, flavourful dishes of the Middle East and Mediterranean are proving irresistible to food lovers with palates for the exotic. 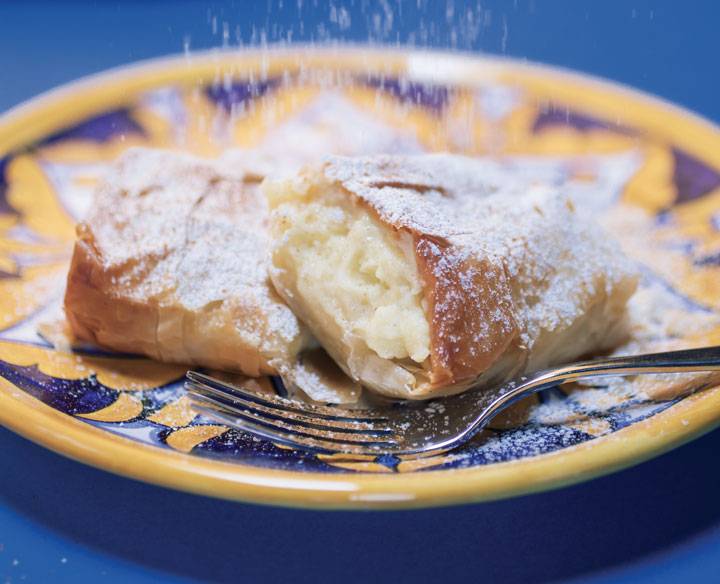 This heavenly bougatsa from Fig Deli is a concoction of delicate phyllo pastry and lemon curd, finished with icing sugar and cinnamon. PHOTO: JEFFREY BOSDET WITH STYLING BY JANICE HILDYBRANT

A hint of cumin, a dash of golden saffron, the sweet heat of Aleppo peppers and all manner of savoury slathers to scoop up with warm flatbreads — they’re the makings of a Middle Eastern feast.

And though you may not have a chance to explore a Moroccan souk to shop for your supper, it’s easier than ever to try the exotic flavours of Lebanon, Israel, Turkey and Syria right here at home. Whether you’re dining out for falafels and shawarma or setting out a meze platter of olives, hummus, grilled halloumi and sweet baklava for guests, the traditional dishes of the Levant are approachable and infinitely sharable.

A Creative, Stylish and Savoury Cuisine

Often vegetarian, or at least built around vegetables and legumes, a Mediterranean diet appeals to the health- and environment- conscious consumer too. And with star chefs like Britain’s Yotam Ottolenghi (author of the break-out cookbook Jerusalem) elevating the simple ingredients with creative new combinations, it’s stylish, too. Which may be why we’re seeing a surge in this kind of cuisine around the world.

Victoria chef Joel Pollock was such a big fan of falafel he perfected the recipe and built his own Middle Eastern-inspired restaurant, Yalla on Blanshard Street, around the popular street food. A visit to Israel and the West Bank galvanized his love of the region’s flavours, inspiring his own variations of hummus platters to share, with savoury toppings like sautéed mushrooms or roasted squash; kale salad with chewy bulgur and cubes of fried halloumi cheese; and hand-cut fries dusted with Yemeni-style hawaij spice mix to dip into a creamy yogurt sauce. There’s even a house-made version of Israeli limonana, a slushy lemonade drink made with fresh mint.

Abdallah El Chami (a.k.a. Dallah), the co-owner of newly opened Superbaba, had a similar epiphany. After developing a following for his Lebanese-inspired catering at The Dallah Menu in Vancouver, El Chami joined forces with partners from Tacofino and Café Medina to create the stylish new diner downtown. It’s another scratch kitchen with counter service and take-out options. It’s devoted to all things Middle Eastern, with many dishes reflecting El Chami’s own Lebanese roots.

Indeed, you might find him rolling the house-made sourdough pita breads to fire into the restaurant’s custom Wood Stone oven, grinding chickpeas for the made-to-order falafel, or pickling turnips in fuchsia beet brine to serve alongside.

It’s fresh and fast food — traditional falafel, chicken shawarma or steak kebab offered with mix-and-match presentations ranging from wraps to grain- or green-based bowls. A sweet ending comes in the form of a crisp, golden cookie scented with earthy turmeric and rose water.

Shopping For Essential Spices and Ingredients

Another great spot to find house-made salads, spreads, pastries and imported Mediterranean ingredients for a casual meze meal is Fig Deli at the Cedar Hill Mall.

Yasser Youssef, the gregarious owner, is often behind the deli counter greeting customers. Youssef came to Victoria from Lebanon 30 years ago to attend university — and never left. He first introduced locals to Middle Eastern food at his Lakehill Market, then expanded to create the full-service Fig Deli.

Youssef is the guy to ask if you have a question about ingredients or recipes from the Middle East. The region is home to people from many ethnic backgrounds — from Arabs, Turks, Israelis, Persians and Kurds. All use similar ingredients, he says, but each country has its own version of traditional dishes, tweaked to reflect local tastes.

Harissa is a case in point. This spicy red pepper paste with roots in North Africa morphs with the chilies in various regions, whether it’s the famed Aleppo peppers of Syria or the smoky-sweet urfa variety from the Gaziantep region of Turkey. Garlic, olive oil and cumin are also part of the mix, as are rosemary, thyme and lemon sometimes.

The spicy zhug of Israel is a variation, as is the Turkish biber salcasi. You’ll find the condiment in all of its iterations on the shelf at Fig, and Youssef recommends using it in rubs and dressings, or adding it to soups and sauces for a kick of authentic flavour.

There are other essential ingredients that you’ll want for your meze meals — cumin, sumac, olives, bulgur, couscous, dried fruits and nuts, and pomegranate molasses. The latter is a thick, sweet reduction of pomegranate juice — the secret to Youssef’s muhammara, a red pepper and walnut spread that, along with hummus, baba ghanouj and other house-made dips, is among Fig’s best sellers.

You’ll also find sweet and savoury baked goods here. A favourite is the warm round of olive bread, filled with tapenade and rolled into a pull-apart knot for noshing. Or try a variety of phyllo pastries, including spanakopita, baklava and bougatsa, a flakey packet oozing lemony egg custard.

Already Victoria has Saraya Hot Bread, a food company launched this year by Ibrahim Hajibrahim and his wife Ranim Khochkar. The couple, recent refugees from Syria, are making traditional foods, including dolma, lentil fingers, breads stuffed with peppers, and muhammara, and retailing them in the deli section of local Red Barn Markets.

It all makes planning your own Middle Eastern feast easier. You can include an array of dishes, including fattoush, tabouli and bulgur salads, chickpea-based hummus and falafel, squeaky slabs of fried halloumi cheese, kibbeh and lentil stews and flatbreads served alongside a variety of dips. Simply offer an array of spreads, breads and cheese for a casual buffet, or add a hearty lentil soup and a rustic main like braised lamb stew or chicken with bulgur pilaf for a more formal meal.

Sharing these foods bridges cultures in new, positive ways, as Ottolenghi does in his modern melding of eastern Mediterranean recipes sourced from Christian, Muslim and Jewish cooks.

It’s the perfect chance to gather friends around the table for an exotic taste of the Middle East, a colourful, sunny antidote to a West Coast winter.