Artist and jazz musician Noah Becker about his “New York state of mind” and why the Big Apple keeps beckoning him back. 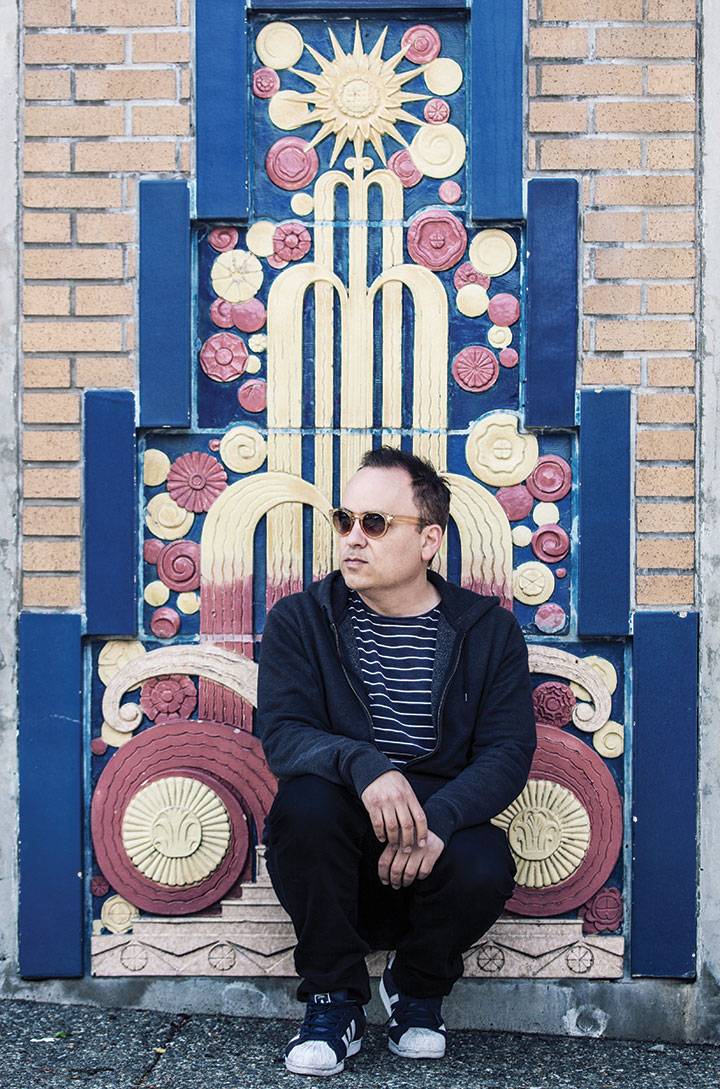 It’s hard to believe Noah Becker once called himself “a feral hick from the sticks who learned the ways of the city later on.”

It must be later on.

That 47-year-old hick, and part-time Victorian, has prospered in New York City as painter and jazz musician after twice moving there — once in 1997 and again in 2010 — following in the footsteps of another New Yorker, Andy Warhol, who immersed himself in a multidisciplinary model of creating art.

When I ask Becker what label I can pin on him — musician, painter, writer, magazine publisher, art show curator, filmmaker — he offers a wry smile like he was hoping I’d ask.

“I don’t think that just because you do something, suddenly that’s another career to pile on …” he says. “As far as saxophone playing goes, I do it professionally and I record and I perform, but I’m more interested in writing music and recording music than I am in touring all over the world, so it’s a little bit like Glenn Gould deciding to not tour.”

“Just don’t become some sort of weird recluse and carry your own chair around and gobble amphetamines and …” I tell him.

Achieving celebrity in a city of celebrities is no easy task. It means numerous museum and gallery shows, 30 years of making thousands of paintings, gigs with famous musicians. And making a living in New York means living in New York, curating art shows, creating a documentary about the city’s current art scene called New York is Now, and publishing the online Whitehot Magazine of Contemporary Art, an insider’s guide to the international art world.

Those who remember Becker’s days in Victoria in the 90s as a Hermann’s Jazz Club regular with his big alto sax, splashing canvases at his Chatham Street studio or creating a giant portrait of Tchaikovsky onstage with the Victoria Symphony, might recall a too-serious twentysomething with a chip on his shoulder.

But what some perceived as hubris might just have been self-confidence. Enough to fuel his Big Apple successes.

Without a hint of irony, Becker offers up that his entry into the Victoria scene was as prodigal wunderkind. He found a city where he could acquire a following and make a living painting and playing music.

A RITE OF PASSAGE

Moving to New York has always been a rite of passage for artists and writers. Becker figures he was meant to be there.

He has grooved on what Billy Joel once sang of as a “New York state of mind” since he began hosting a cadre of visiting Canadian jazz musicians at his Brooklyn apartment in the late 90s, all of them on pilgrimage to the jazz world’s capital.

“The reason I live in New York,” he says, “is there are a lot of people like me, the sort of people from this small town and that small town with a sense of hyper-talent — or their community propped them up to a certain point and said, ‘Oh, you’ve got to go to New York because you’re too big for this town.’

“That’s a stereotype I’ve let go of. Like that scene at the end of Pulp Fiction where Samuel L. Jackson is talking about getting out of the crime industry and just walking the earth. I feel like I’m edging up on the ‘walk the earth’ phase of my career.”

There’s also an art to living in New York — more than just surviving it by pounding the pavement until your feet bleed.

“New York is the kind of place people go where they expect to be world famous in six months and then die at the age of 27,” muses Becker.

“People who grow old in New York usually are millionaires and billionaires because they have the opportunity to not have to fall down the subway stairs in their elderly years. They can have a driver and they can wear their giant round glasses and their all-black clothing. So it’s sort of a wild thing to be 40 years old and decide to move there. New York takes a lot of energy. It’s a place, to sort of quote Glenn Gould again, that’s a debut city, like everybody goes there to have their debut.”

A STATE OF BECOMING

Born in Ohio and raised on Thetis Island by American parents, both potters and later the owners of Artworld, the art supply store on Yates, Becker was “encouraged, not forced” to become an artist.

At age 11 he started playing sax. At 15, wanting to be a comic-book artist, Becker attended the Victoria College of Art to draw better Marvel comics.

“That ended up turning into ‘art’ and, to my surprise, I made things that people considered art.” Like the two giant portraits of Mozart and Rossini that hung in the lobby of the Royal Theatre.

Other influencers became part of his script: Francis Bacon, Arthur Rimbaud, Charlie Parker and Ornette Coleman, whose horn he got to play during a visit to the late jazz visionary’s apartment. Becker found the Pulitzer Prize-winner to be more philosophical than gregarious.

“He wasn’t the kind of guy where you show up and go, ‘Hey, how you doing?’ You’d go in there and you’d be like, ‘How you doing?’ and he’d say, ‘There’s all these people in the world and not one of them is trying to find out who they are. Do you agree?’”

Becker’s sax lesson from the master was trippy. Coleman had him play the same note 10 times.

“Finally, when I played the note for the 11th time, he goes, ‘There it is.’ He opened me up to things I hadn’t considered before, which you’d expect from someone like that.”

That’s what New York has done, opened him up to opportunity, like it has so many before him. And that’s why Becker will continue finding himself drawn back to that city.

“I came to the conclusion that people like Bob Dylan, or Warhol, or Ornette Coleman, or whomever it may be that’s associated with New York, they were there for a period of time, but they’re associated with that city forever — and I think that’s kind of the goal for me,” he says.

“I want to be associated with New York, so I guess I’m just trying to make a mark and create an association with the cultural pulse of that city. And I don’t know how long I’ll have to interact with that to make that happen, but I’m not putting pressure on myself.”