If the idea of hosting a party this summer has you running for the frozen appie section at your local big-box store, fear not. Armed with some savvy kitchen strategies, cooking tactics and global inspiration, there is life beyond the ubiquitous shrimp ring.

Even if you’re squeezed for time or lacking confidence in the kitchen, you can pull off these easy appetizers. 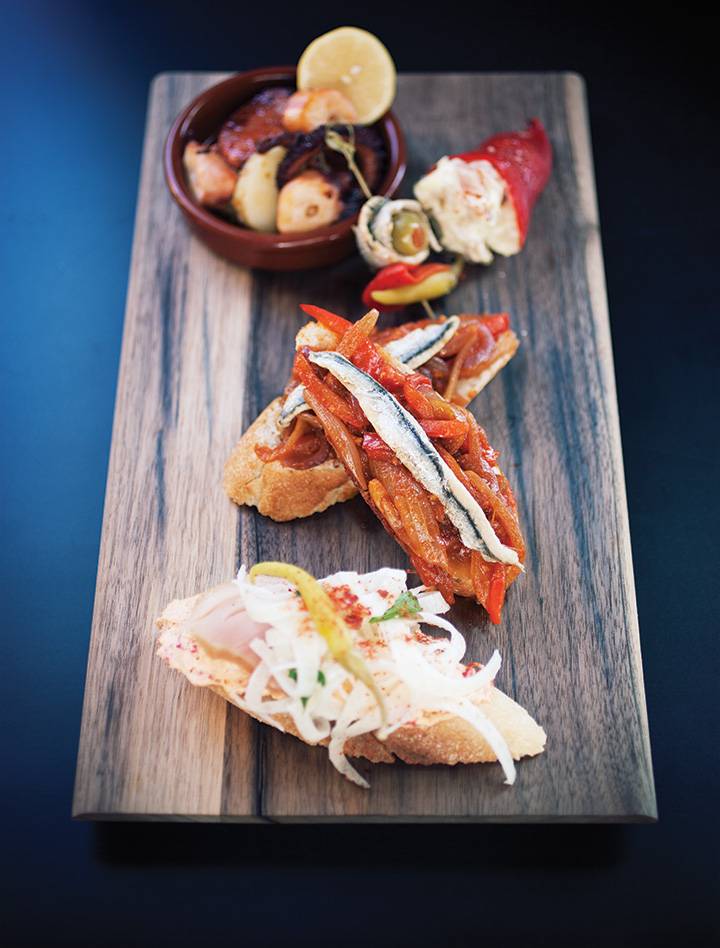 Small Nibbles
Bowls of nibbles strategically placed around the room or patio will ensure your guests are never far away from sustenance. Popcorn is not just for movies anymore. Make it the day of your event for a simple, fun appetizer. Go ahead and pair hot-popped kernels with trendy, globally-inspired seasonings: Japanese togarashi spice for a flavourful kick; smoked paprika for a decidedly Spanish twist; bacon-infused salt for fun; curry for an Indian flavour; or truffle oil and salt for something posh.

Spiced nuts are another crowd pleaser. Raw cashews or almonds can be elevated to new heights with a simple toss in hot olive oil to toast them; then drained and sprinkled with any of the spices listed above. They can be made a few days in advance.

Olives are another no-brainer. Combine with lemon or orange rind, a few fennel seeds, or a splash of Pernod, and heat gently in olive oil. Let them cool, allowing ingredients to meld for extra depth of flavour. (Extra points for removing the pits!)

Bring on the Cheese
When choosing cheese for a platter, flavour and texture should be a factor along with visual appeal. Think round soft cheeses such as Brie or Camembert alongside an ash-ripened pyramid-shaped French goat cheese. Add a large chunk of sharp farmhouse cheddar with a fruity Emmental and a rich, full-flavoured blue cheese. All contribute to a well-rounded cheese plate. Display with crackers and clusters of grapes. Avoid smoked or pungent cheeses; their aroma can kind of overtake the party.

For Love of Phyllo
Meet phyllo (filo) pastry, your new best friend. Those versatile papery thin sheets of unleavened flour dough can be used to hold a multitude of sweet or savoury fillings and can be made up to a week in advance. When it comes to fillings, spinach and feta cheese (spanakopita) is a classic. Also delicious are curried potatoes and peas, chunks of Brie with mango or festive cranberry chutney, or gingery ground pork with shrimp.

For the phyllo itself, use two or three layers, one on top of the other, each one brushed with melted butter. Using a knife, cut the sheets into equal strips to make stuffed phyllo triangles. Brush with butter and freeze until party time. Cook frozen
at 350˚F until golden brown.

A Bit of Olé
Another worthwhile servant on the hors d’oeuvre tray is the baguette. Its ability to transport one-bite flavours to the mouth was a revelation to me on a recent trip to San Sebastian and Barcelona, lands of tapas.

Chef Dave Craggs of the tapas bar Perro Negro, also found inspiration after eating his way through Spain. His advice for making small bite wonders? “Tapas don’t need to be complicated,” he says. “They’re really robust, but simple at the same time.”

(Makes 3 cups)
This recipe is served warm at Perro Negro as a topping for one of their montaditos (roughly translated as a topping “mounted” on a slice of baguette, fresh or toasted). Garnish with a pickled anchovy (boquerone), grated hard-boiled egg and a grated cheese such as a goat cheese or Spanish Manchego.

Sauté onions in olive oil until translucent. Add garlic and spices and sauté briefly to release their flavours. Add the tomatoes. Break them up a bit with a wooden spoon. Add the peppers, a pinch of sugar, a bay leaf and season to taste with salt and pepper. Simmer for 25 to 30 minutes. Adjust seasoning if needed.