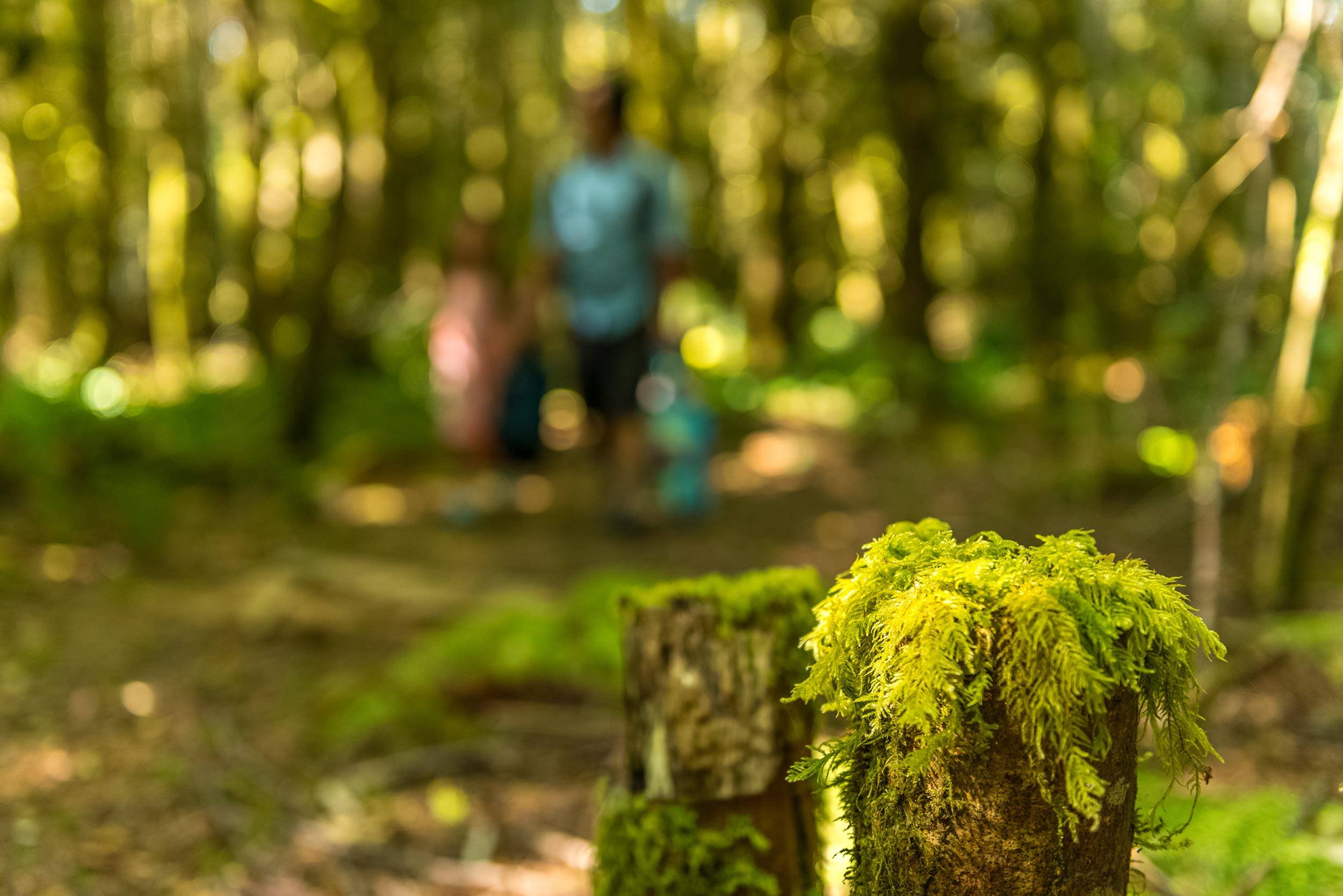 Port Renfrew’s soundtrack is waves. On calm days, they strum the fretted shoreline, home to the Pacheedaht First Nation, who call themselves People of the Sea Foam. On stormy days, the waves drumroll their arrival, tossing trees against jagged rocks like toothpicks. They are the rhythm of life in this Pacific outpost located miles beyond cell reception, and a siren song to people like us, seeking serenity off the beaten track. 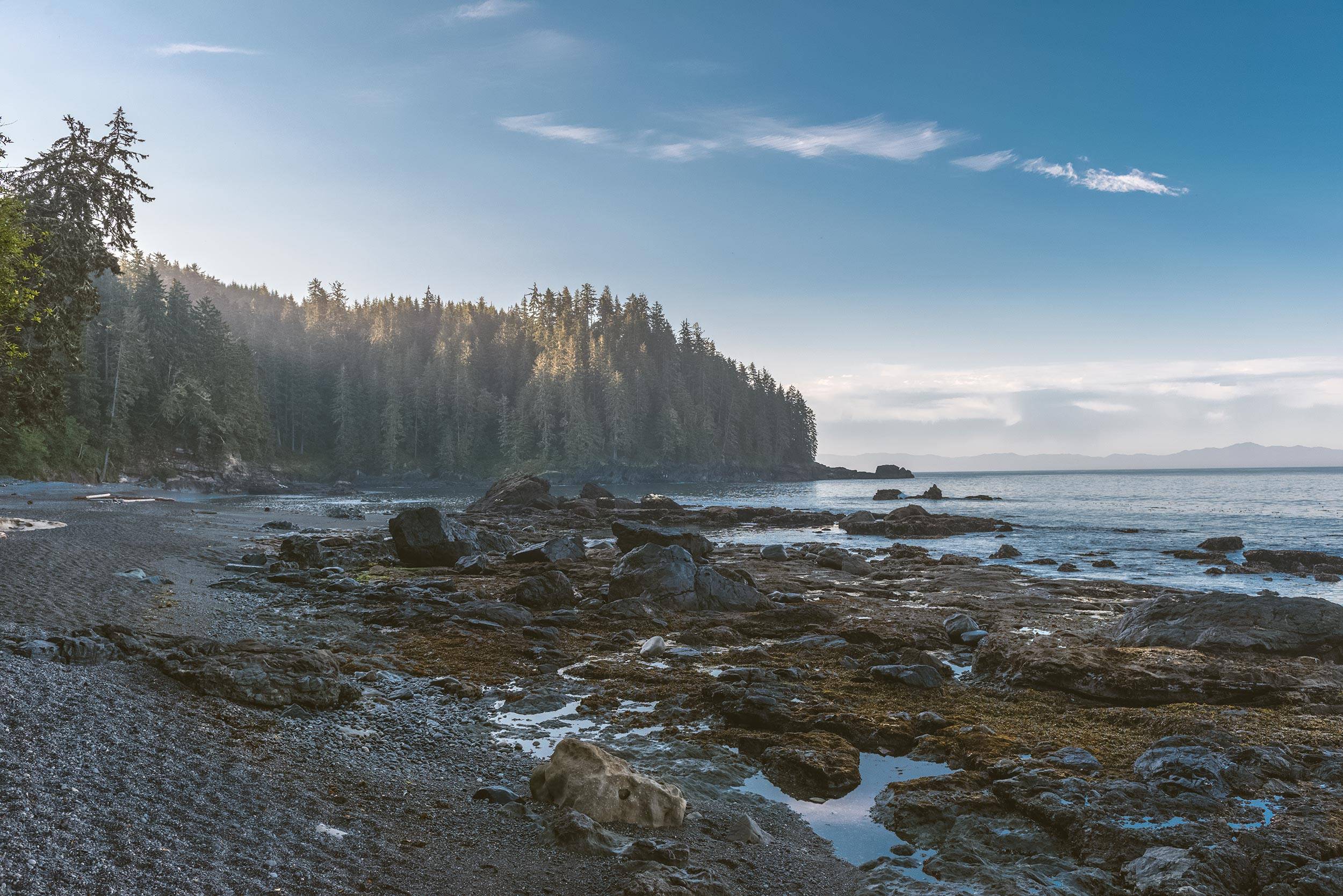 Truthfully, for years Port Renfrew wasn’t on our radar. My husband, Chris, and I aren’t hikers, so its locale at the West Coast Trail’s southern trailhead wasn’t a draw. Nor are we fishers, so its rep as one of the world’s best places for ocean and freshwater fishing wasn’t a lure.

Yet we are drawn to the promise of wild beauty, so we began to listen up when this tiny community (population: 200-ish) began emitting a Tofino-esque hum or “the rumour of forests and waves,” to quote Flaubert. It all evoked images of beach fires under starry skies, untouched by urban light; of storm watching so dramatic it revs the heartbeat; of primeval forests of giant, gnarled trees; and of the surreal seascapes of Botanical Beach, where, as author Susan Casey might say, “The mysteries come forward in waves.”

Along with Chris, my other companion for this escape is Casey’s book The Wave: In Pursuit of the Rogues, Freaks, and Giants of the Ocean. It’s a fitting read for a place which, while not known for Hawaii-size waves, is intrinsically tied to the ocean and has had its share of shipwrecks.

Magic of the Wild Coast
We leave Victoria on a clear morning for our drive along the twisting ribbon of West Coast Highway to Port Renfrew, two hours northwest of Victoria. By the time we pass Sooke, the mist is burning off the fields. Our first stop is the seaside slip of a village, Jordan River, or Rio Jordan as its Spanish founders named it. We order pizza flatbread at the funky Cold Shoulder Cafe then cross the road to watch surfers in wetsuits paddling out like black seals. Jordan River is a Canadian surfing sweet spot for those willing to brave cold water, especially during winter months when those big, frosty swells roll in. 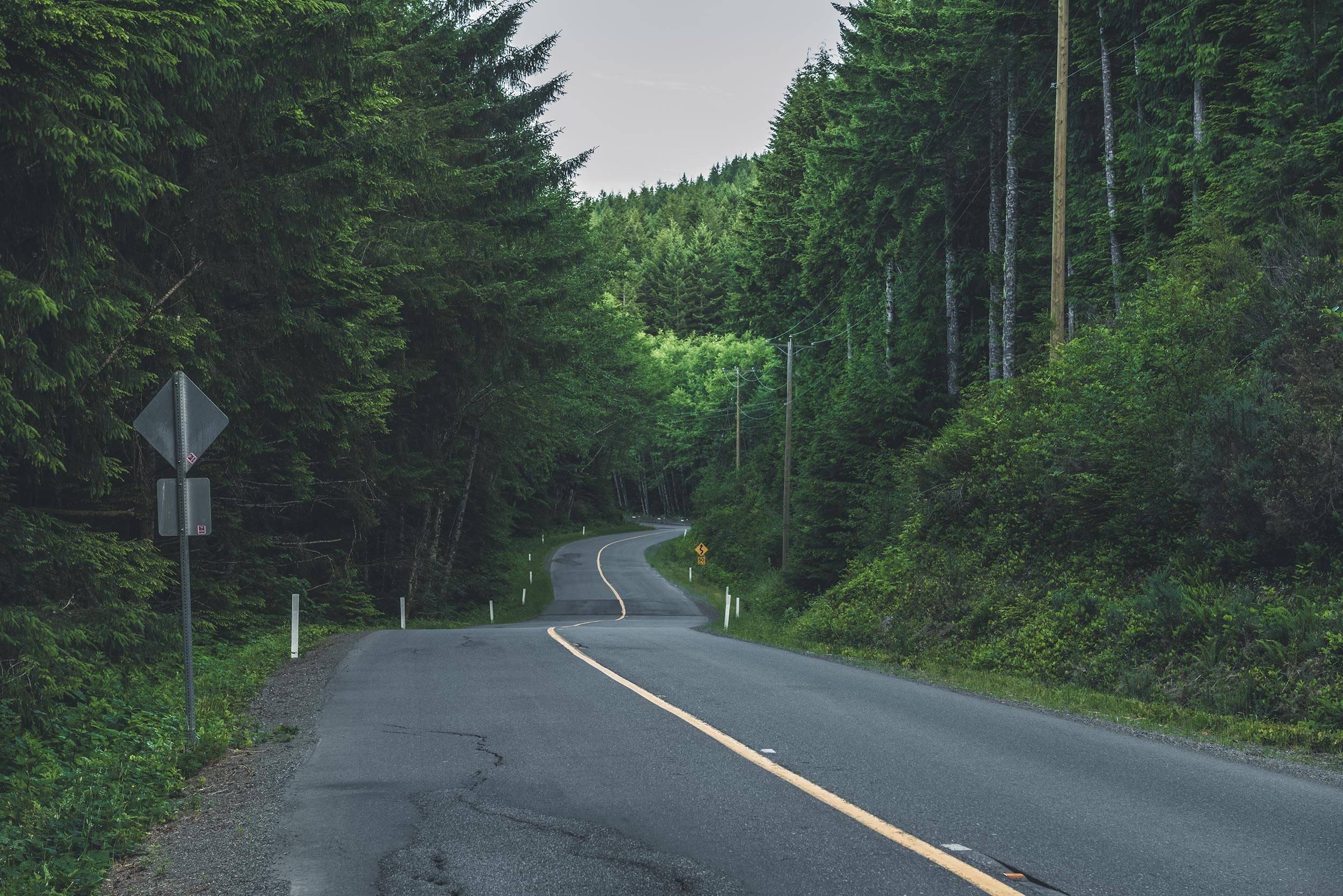 Back on the road, we pass a poetic roll call of beach signs for French Beach, China Beach, Mystic and Sombrio. Soon, cell reception is lost and there’s every sense we’re going to the back of beyond. At some point, fields and forest give way to clear-cut swathes. It’s not pretty, but neither is it the whole story of Port Renfrew and the San Juan Valley. There’s a big reason Port Renfrew is home to the annual Tall Tree Music Festival — it has very, very big trees.

Arrival in Port Renfrew is a bit of a surprise, as in “surprise, there’s no main street.” What qualifies as a main drag is the scenic wooden pier flanked by the cedar-sided Renfrew Pub and Wild Renfrew’s Seaside Cottages, log cabins that promise rustic luxury and coastal charm.

Too early for check-in we decide to make the most of the sunshine and head 20 minutes up a dirt road to one of Port Renfrew’s natural calling cards, Avatar Grove. This verdant temple, 50-plus hectares of soaring Douglas fir and cedar, was saved from logging by the efforts of the Ancient Forest Alliance, guardians of this pocket of old growth, which the B.C. government has deemed an “old growth management area,” not a park. 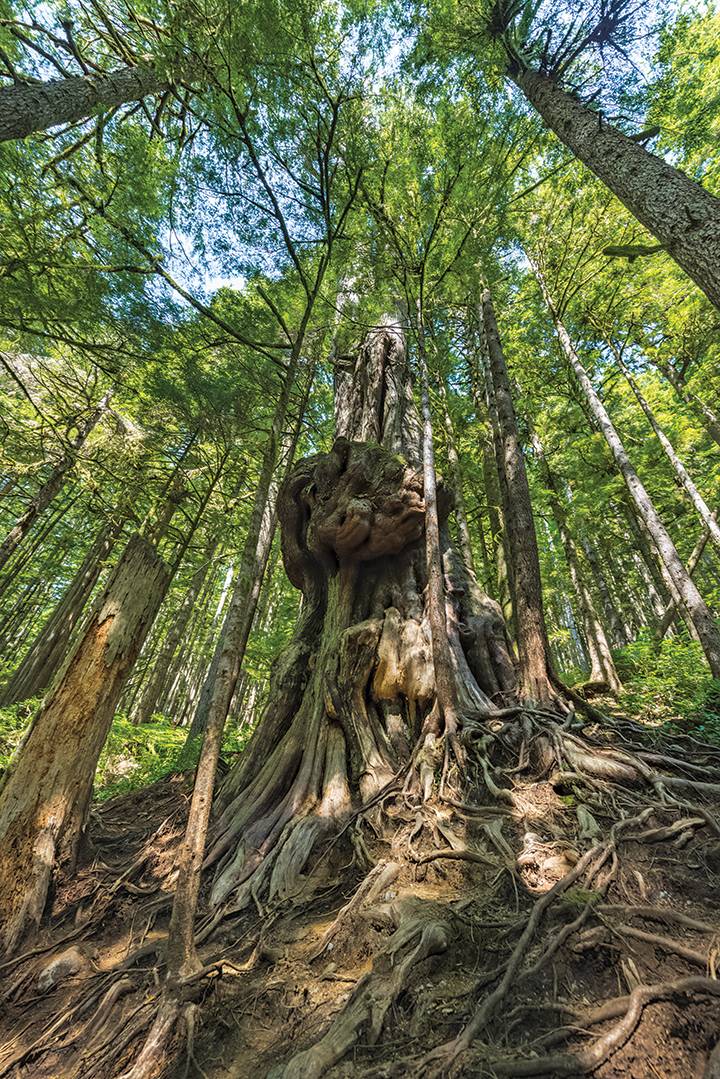 Parking roadside, we take the upper trail in search of the giant Western red cedar, “Canada’s Gnarliest Tree.” For half an hour we hike over spongy, pungent earth and slick roots, across windfalls and a fast-flowing stream until we arrive at the base of the gnarly icon. Some hikers gather there, silently taking in the tree’s almost facelike bulbous burls and gnarls. This tree has all the presence of a forest goddess watching over her ecosystem. As I gaze up, I think of the poem “Lost” by Pacific Northwest poet David Wagoner:

Stand still. The trees ahead and bushes beside you
Are not lost. Wherever you are is called Here,
And you must treat it as a powerful stranger,
Must ask permission to know it and be known.

We spend some quiet time in the shadow of the cedar, then head for the Renfrew Pub patio for cold pints of Saltspring beer, calamari and halibut. Sated and sleepy, we clomp down the pier in boots thick with Avatar Grove mud to check into our two-bedroom “penthouse” at Wild Renfrew’s Seaside Cottages. 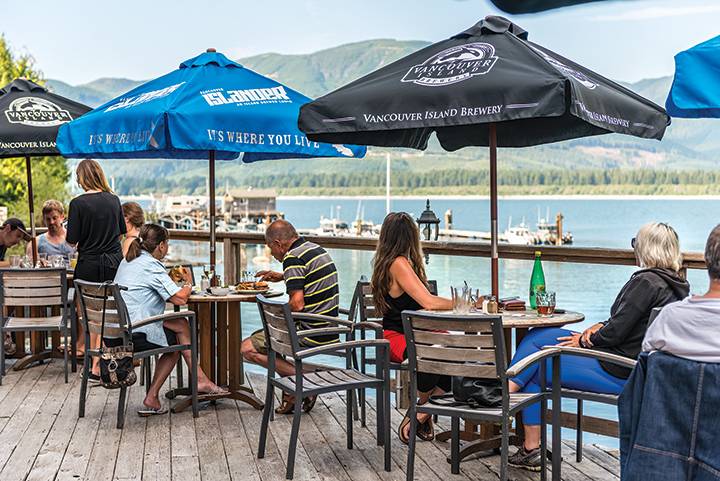 Our elevated cottage is log-cabin living at its luxurious best, with a view across the waves to the misty shores of Pacific Rim National Park Reserve. Later, we discover this cottage was once a jailhouse, thus its nickname “Alcatraz.” Fortunately, we feel nothing but freedom.

My husband lights the gas fire-pit on the huge patio and sinks into a lounge chair, covering himself with a fleece blanket and falling asleep to the sound of waves. I stroll down the pier, past totems Wild Renfrew has commissioned from Pacheedaht artists. Alongside the pier, a geological formation known as a sea stack juts out of the water, carved by wind and waves. On pilings, cormorants pose, holding their wings out in odd crucifix postures I learn are called “wing-drying.” 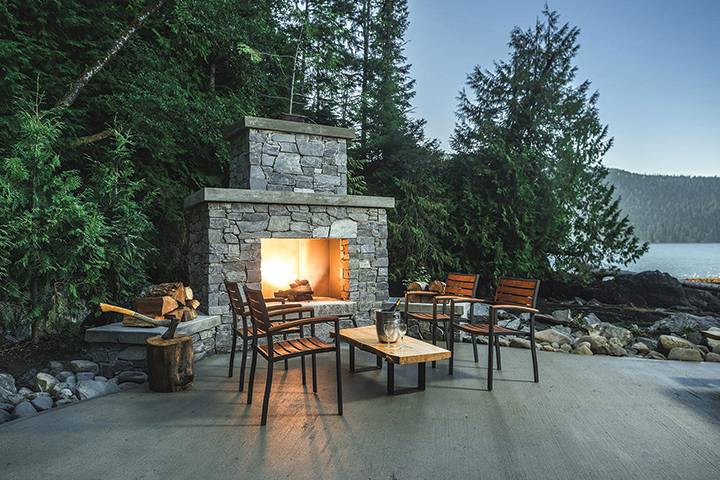 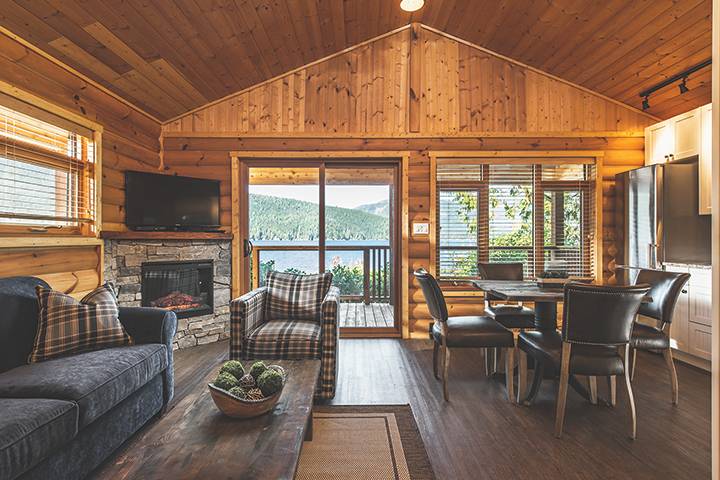 As the sun sets, we head to the Renfrew Pub’s vaulted dining room for a long-table spring dinner prepared by Chef Kevin Loewen, whose offerings play with the terroir of this outpost, and could compete in any restaurant, anywhere. Our hosts are Jack Julseth of Three Point Properties and his business partner, his son-in-law Ian Laing, and their family. In 2015, the family purchased the pub, 11 waterfront cabins, now Seaside Cottages, and the land for the Wild Coast Cottages, spectacular vacation cottages on a bluff overlooking the sea, from Richard Bonnycastle, former owner of Harlequin Romance. 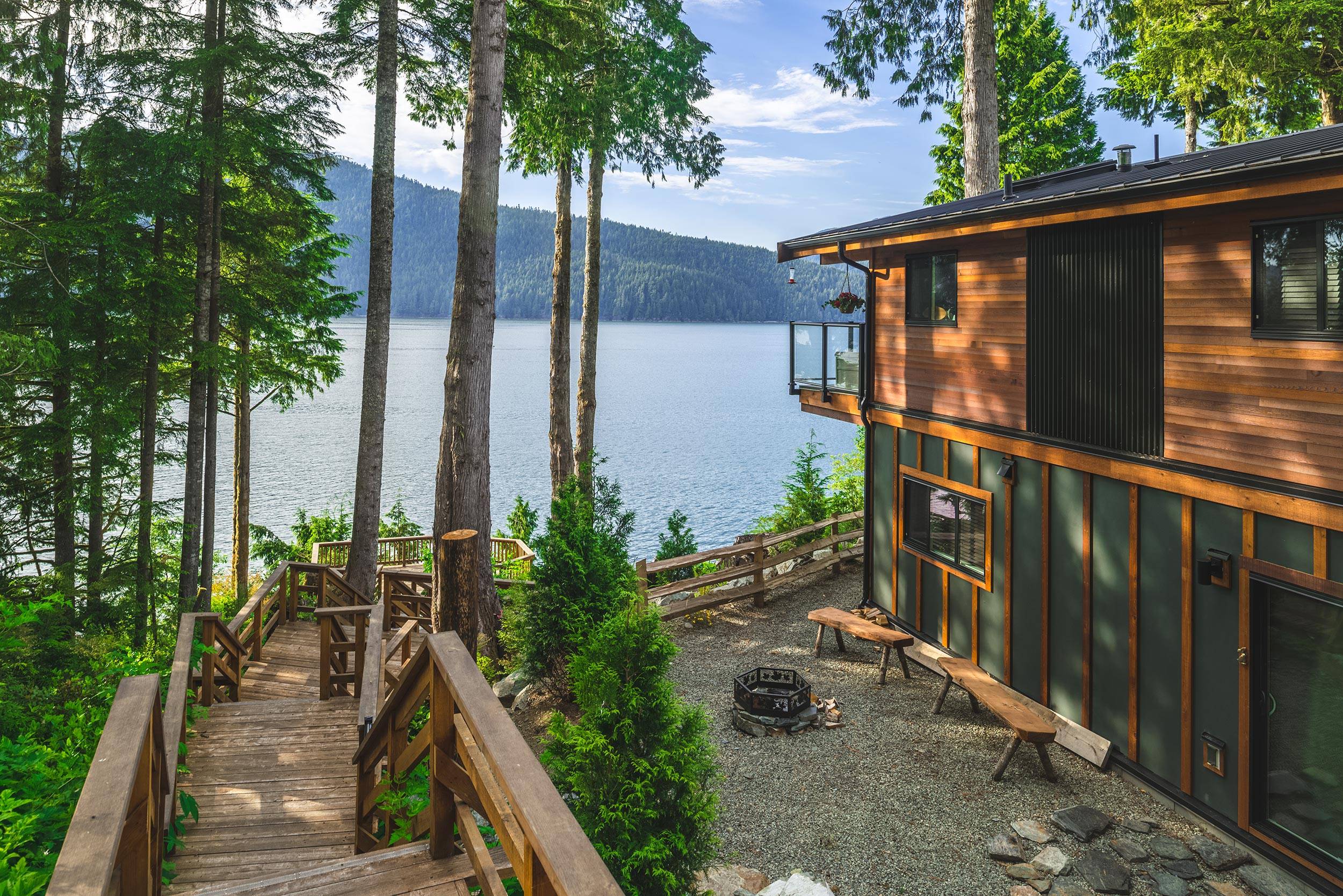 It’s clear both Jack and Ian have a connection to Port Renfrew that goes deeper than the business opportunity. Jack has fished here for years and loves it. Ian spends lots of time here with his young family, often leaving Victoria on a Friday and spending weekends in Port Renfrew where some locals call Ian “English Ian” for his city style. In Port Renfrew, every second person has a nickname.

Speaking of locals, Port Renfrew’s unofficial mayor and a friendly fixture at the Renfrew Hotel is Johnny “Mac” McDonald, an archer who competed in the Seoul Olympics. A former Victoria shipyard worker, Johnny is famous for lending a helping hand with everything from auctioning off his beard in support of the Tall Tree Make Music Program to supplying jerrycans of gas to tourists who didn’t “get” that Port Renfrew has no gas station, though Ian and Jack tell me one is opening this summer.

Also imminent is the long-awaited marina with 60 moorage slips, a heli-pad, gas and diesel sales and a rock breakwater for year-round moorage protection. It will be a vital port in a storm for mariners (on this stretch of coast, there’s nothing else from Sooke to Ucluelet), opening the door to marine tourism.

Taking the Sea Cure
Sunday morning brings in the surly, big waves that crash and grind against the shore below our penthouse. I can’t capture the feeling better than Susan Casey who wrote, “They move across a faint horizon, the rush of love and the surge of grief, the respite of peace and then fear again, the heart that beats … the infinite procession of life…”

After breakfast, we stormwatch from our deck. A blue heron flies by, a Jurassic outline against a slate sky. A bald eagle rides air currents. No whales, but it’s early in the year.

By afternoon, we’re excited to catch low tide at Botanical Beach. I’ve waited so long to visit this epic coastal destination, I worry it won’t live up to its promise. I needn’t have worried. After 15 minutes of hiking an easy forest trail under branches heavy with wet bearded moss, my pulse quickens as I hear the pounding surf, a sound like the rush of breath. Suddenly, the ocean is before us, surging toward a vast beach pockmarked with tidal pools, crisscrossed with driftwood, scarred with striations in black basalt and marked with sandstone sculptures carved by nature. We’re alone here, yet not. The place has palpable presence. 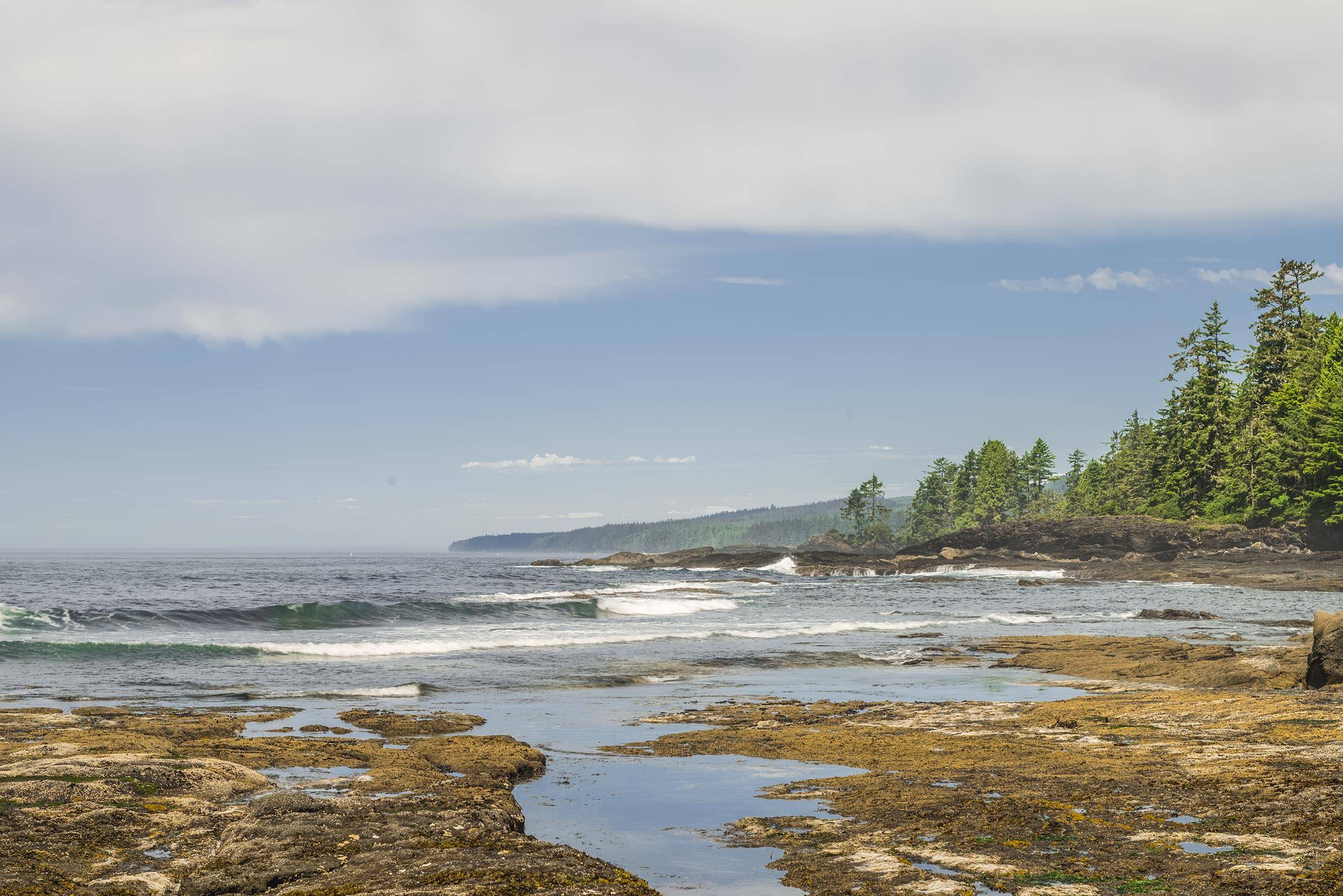 The intertidal air is briny, primordial. Isak Dinesen once said, “The cure for anything is salt water — sweat, tears, or the sea.” I breathe deeply and taste salt on the mist. I feel small here and it feels good. My problems, too, are small here. I stare into the tidal pools which, though they lack a summer richness of starfish, gooseneck barnacles, snails and anemones, do yield a few mussels and a leathery brick-hued gumboot chiton. This chunky mollusk suits its nickname (remember how Port Renfrew loves nicknames), “the wandering meatloaf.”

As the day darkens, we head back up the trail. We should have left earlier but it was hard to pull ourselves away from the wild beauty. Halfway up the trail, Chris says, “Imagine if you were a cougar and had to hunt every time you wanted to eat.” I think of the cougar and bear signs at the trailhead and pick up my pace.

That night, over a pub dinner of superbly tender ribs, we’re grateful we don’t have to hunt like cougars for our next meal. We’re also grateful to have finally “discovered” Port Renfrew, outpost of the kind of cool you can’t make up — an authentic cool that comes from people who know they’re onto a great thing.

We vow to return in the summer, taking the Marine Circle from Victoria to the Cowichan to Port Renfrew and back to Victoria via Sooke. Ian promises us summer beach fires and blue skies (“It doesn’t rain much in the summer, you know?”).

And that’s the thing about Port Renfrew, if it rains, it doesn’t matter. Just being there is enough. 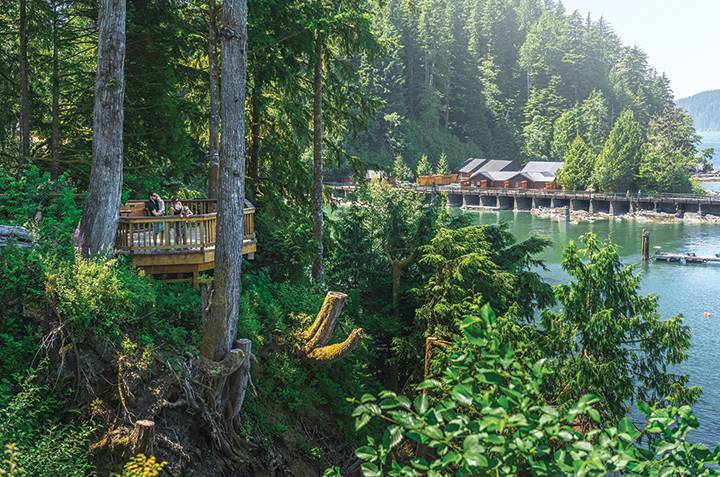