Fitness is often held up as the holy grail of weight loss, with workouts portrayed as something to be endured. Think Gillian Michaels red faced and screaming at contestants on the Biggest Loser. But the women whose stories are featured in this article show that inspiration, not intimidation, is the most powerful tool when you are embarking on Project You. 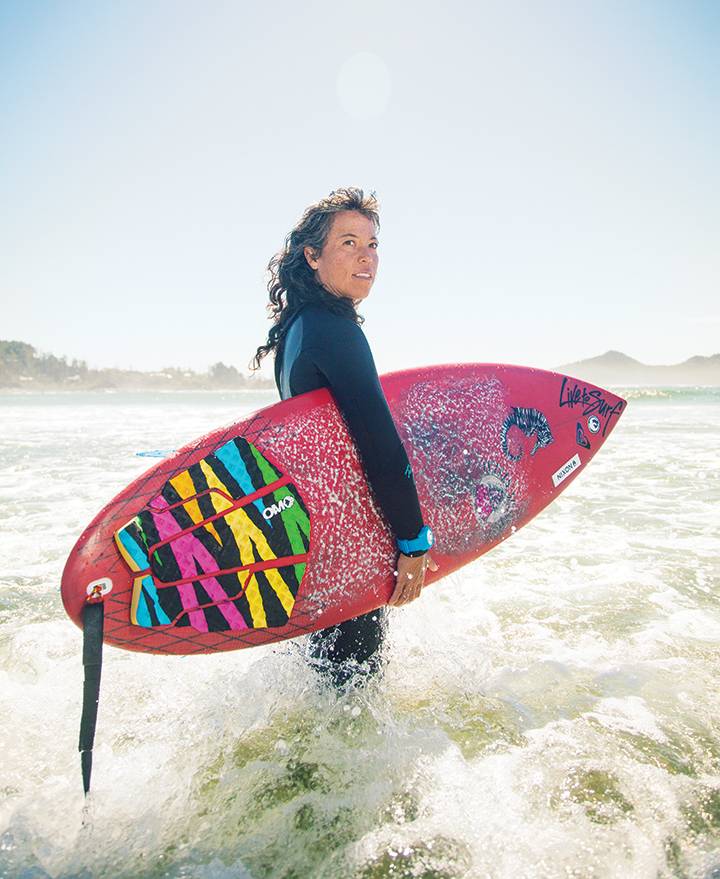 Surf’s Up
After experiencing an Endless Summer surfing camp in Santa Onofre, California, Shandy Kariatsumari, then an Alberta girl, knew she had to get to Canada’s own surfing sweet spot in Tofino. A move to Vancouver for art school in her early 20s provided the opportunity, and it wasn’t long before she made a permanent move to the wild coastal town, where she now teaches ocean lifesaving classes through the Lifesaving Society.

“I grew up competitive swimming, and I thought surfing would be easy,” she says.
“But I soon woke up to the fact that an open ocean and its changing environments are very different [from a pool]. Surfing brings a lot of real, in-the-moment time.”

When she first started, Kariatsumari surfed multiple times a day and travelled the world to find surf spots. But becoming a single parent eight years ago has changed her relationship with surfing.

“My focus is on something so much more important now,” she says. “And when I got back to it, [I wondered] if I would be at the level I was at previously. If you haven’t done something for a little while, that feeling is only overcome by actually doing it. Between work and parenting, I now surf whenever I get a chance. Whether that’s a 20-minute session or four hours, it’s something I do with full gratitude.”

She believes surfing is a self-empowering, self-motivating activity, because, while beginners should have a lesson and learn basic safety, ultimately you have to get yourself up on the board.

“I always tell people, when they catch their first ride, even if it’s one inch of white water, it’s the same feeling all surfers feel of the ocean working for us,” she says. “It’s nature that we’re sliding on, and it’s ever changing.” 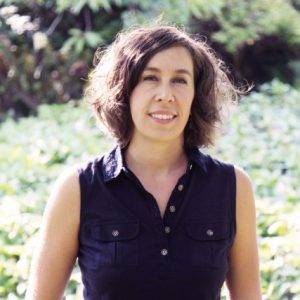 A New Mindset
Vanessa Herman admits she used to make fun of the “ridiculous people” who would go running in the rain. “Now I’m one of those people, and I love it,” says the writer, landscaper and organizer of the Victoria Writers Festival.

Calling herself a reformed couch potato, Herman ran her first 10K as part of the staff team for Russell Books when she was still living a sedentary lifestyle. “I felt so horribly out of shape and I knew I never wanted to feel like that again,” Herman says.

But the mental hurdle was bigger than the physical one, and it took a full year before Herman committed to training, setting the goal of a 5K for her 31st birthday, two years ago. It wasn’t long before she was hooked, losing 40 pounds and discovering that 6.5K is her favourite run distance in the process.

While weight loss was one of the motivating factors, Herman says she was actually looking to change her life when she took up running. She was finished university and feeling depressed that her degree was not leading to the big opportunities she had imagined. Starting to run and to meditate were conscious decisions to pull herself out of that way of thinking.

“It has cascaded into having a different mindset,” she says. “I’m looking at different jobs that I wouldn’t have considered before in landscaping and gardening. I’m in shape and really strong because of the running, and it’s opened the door to other opportunities.”

Friends have remarked that Herman has more discipline, especially given her 5 a.m. runs.
“This has been a tool of discipline that I’ve been able to apply to the rest of my life,” she says. “I never used to have that discipline, and I feel like I worked for it.” 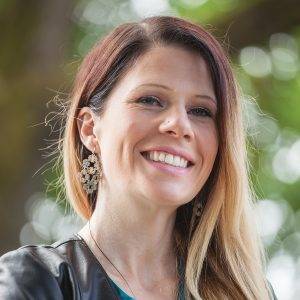 Fitness Buddies
For Colleen Leppky-Robertson, fitness, and the community it provided, was her path to move beyond a painful childhood. Her father died of cancer when she was five, and her mother had a psychotic breakdown when Leppky-Robertson was 10, leading authorities to remove her and her sister from the family home.

“I felt like no one wanted us,” she says. “I never remember being happy as a child. It’s hard to find who you are when you never feel safe. I tried to control anything I could, and that was food and my body. I became anorexic. I was teaching dance through high school, and I would faint all the time.”

When Leppky-Robertson became pregnant with her first child, after being told she wouldn’t be able to have children, she “thought it would magically fix everything.
“I immediately gained 95 pounds and started to have a lot of issues with sore joints and high blood pressure.”

Becoming a mom made her realize that it wasn’t just about her anymore. And she wanted her son to have the childhood she didn’t get to have. She knew that to be a good mother she needed to take better care of herself. Then a friend told her about Jazzercise.

“You flashback to the 80s with the headbands,” she laughs, “and I didn’t really know if it was my thing. I started at the very back and I was nervous. Eight years later, I’m front row centre.”
A big part of the appeal is the community and the leadership of instructor Vicki Waters.
“Whether you’re in the back, middle or front [of class], you feel so much encouragement from the people around you,” Leppky-Robertson says. “You build friendships. It’s family run, and it’s the first thing you feel when you come. This community makes me feel safe and encouraged.”

Her journey with Jazzercise has also seen her tackling her difficult relationship with food.
“If I had a drug or alcohol addiction, I could cut that out of my life, but you can’t do that with food — food is fuel,” she says. “If I want to exercise, I have to give it fuel. You have to learn to make good, healthy choices. I still struggle. I know I still have work to do, but I can look in the mirror and feel happy.” 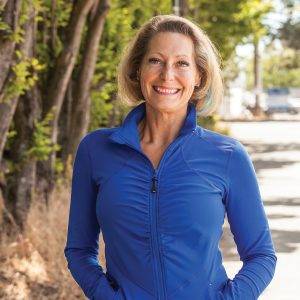 Moving Targets
If someone had told Meredith Zaparinuk two years ago that she would become a fitness trainer, she would have “howled with laughter. “It’s absolutely changed my life; I love what I do.”

The 55-year-old bookkeeper says fitness was never in her background. Though an avid walker, two years ago she was on steroids for allergies and suffering from arthritis in her feet.
“The thought of going to the gym with a 20-something trainer wearing size zero was intimidating,” she says.

But she learned about Vibes Fitness through friends at her golf course, and two 15-minute workouts later, she was hooked. She is now fitter and stronger than she’s ever been in her life, losing 80 pounds and actually getting off the steroids. Her trainer at Vibes, Lynne Wilson, who had been on a similar journey, suggested she get certified, and Zaparinuk is now also a trainer.

“I absolutely notice benefits beyond the physical, too,” Zaparinuk says. “When you feel healthy, it makes everything else easy and better. You have better stamina, and you sleep better.

It’s not about having muscles when I look in the mirror. It’s about having core strength and being able to do all the day-to-day activities.” 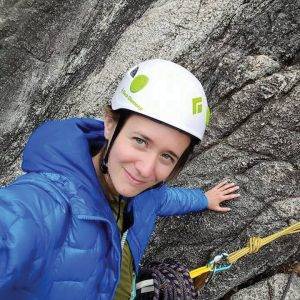 New Heights
For Jes Scott, who works in marketing and communications at the University of Victoria, a little adrenalin goes a long way.  “I like to scare myself a little,” she admits.

A trip to the indoor facility at Crag X Climbing Centre a few years ago led to Scott’s healthy obsession with climbing. Her focus now is mainly on outdoor climbing, and she documents her adventures to places such as the North Cascades in Washington and Nevada on her blog at jescott.ca.

Along with the motivation to be strong — causing her to strength- train in the winter, bike to work and basically make lots of healthy choices — Scott’s favourite thing about her chosen activity is the break from technology.

“I have a job that’s on the Internet a lot and using social media a lot, and I love that stuff, but it’s really nice to get away for a bit,” she says. “It allows you to be concerned with fewer things and just to focus on the people right in front of you, in that moment.”

Her advice to someone looking to find their fitness activity is to pick something of interest and to start small. “As long as you’re having fun, go for it,” she says.

Nothing is Impossible
So what’s stopping you from lacing up your sneakers? For many of us, the mental hurdles are as big as the physical. Leppky-Robertson tackles every day as a choice. “It’s not about the moves and getting it right and looking like a movie star. It’s about showing up.” And from there, who knows where your fitness journey will take you. As Herman says, “Once you start doing the things you think are impossible for yourself, you realize nothing is.”