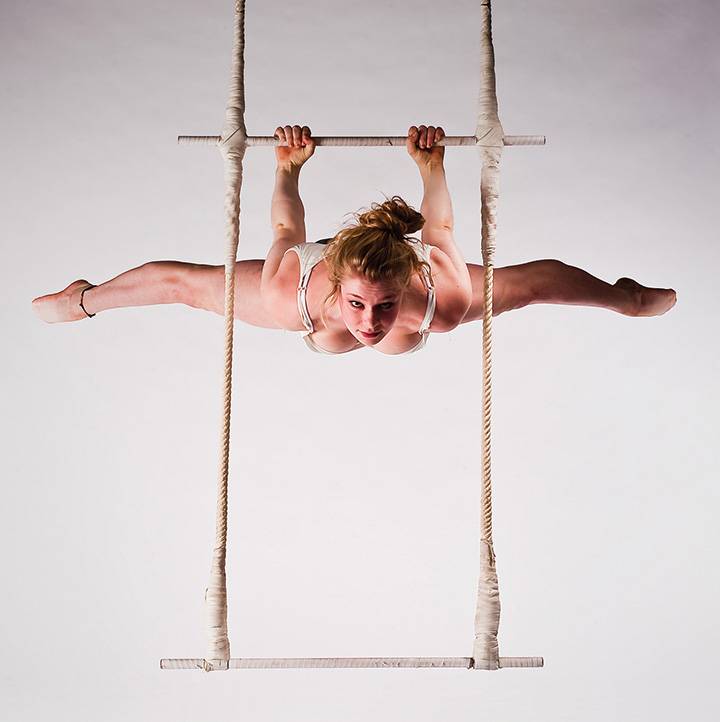 I don’t recall any of my friends running away to join the circus.

But the option always seemed to be there, as a way out. Of something.

Kaelyn Schmitt, a 26-year-old Victorian, knows what it’s like to run away and join the circus. Only she didn’t have to run away — a path she hopes others can follow if a planned circus school opens here in the spring.

A small group of homegrown circus professionals, Schmitt among them, is erecting a metaphorical Big Top that will allow locals to get a taste of what it’s like to play circus with designs on a career. Or just for fun, exercise or experience.

Island Circus Space (ICS) will offer tutelage in aerials, juggling, clowning and acrobatics (including equilibristics, that show of strength and precision where one person balances another), from instructors who work internationally with the likes of Cirque du Soleil.

Their “Step right up …” introduction to the training centre will be a circus show at the Metro Studio Theatre on April 2 and 3, featuring all the disciplines they’re teaching as well as a ladder act, cube manipulation, unicycle and the roue Cyr (where a performer is braced inside a large steel ring manoeuvring it to spin gyroscopically and wobble like a dropped coin). And, adds Jake West, who spearheads ICS, Victoria’s Limbic Media will unveil a mind-blowing motion-tracking system.

West says the response to building a local circus community has been phenomenal. “I had high expectations, but it’s just blown me away. All these crazy circus people are coming out of the woodwork contacting me.”

The 40-year-old West, who juggles and clowns, came late to circus. When he was 26, he visited a friend working with Cirque du Soleil and received the backstage tour.

“They’d throw me off the Russian swing and let me bungee and paint me up in makeup … I’ve never had a better rush. I thought, finally I’ve found my arena.”

Kaelyn Schmitt got there earlier. She was a competitive gymnast during her days at Belmont. When she retired, as gymnasts invariably do in their teens, she pondered a way to parlay all that balance, power and backflipping into a career that would let her perform, travel and be a bit of a daredevil.

In her final year of high school, Schmitt auditioned for the National Circus School in Montreal and three years of intensive training. She focused on an aerial hoop duo act, aerial silks (acrobatics while hanging from suspended pieces of fabric) and double-bar trapeze, the latter of which has made her a headliner. (Check out the great highlight reel of her on YouTube.)

“What I like about circus is the athletic aspect. I can express myself through movement and inspire people and connect with them with that mix of dance, theatre and acrobatics.”

And then there’s that feeling of flying through the air. Few careers guarantee that.Or the “energy exchange” Schmitt says bounces between performer and audience when she’s spinning, one-handed, upside down on the trapeze.

Each circus act — from pie-in-the-face clowning to balancing someone over your head while walking a tightrope — requires specialized skills that must be taught. Want to work in the air? Be shot out of a cannon?

West wants to make ICS into something for everyone, “whether you’re 10 years old or 50, big or small, introvert or extrovert. It would be great for adult fitness enthusiasts, people tired of the same old gym routine. People want to do things that are unique and keep them super fit at the same time. And the kids’ recreation market is just huge.”

Schmitt says circus school gave her the skills and confidence to take her act on the road with regular contracts at circuses in Europe, Asia, South America, Las Vegas or aboard a cruise ship.

“I think Victoria is ready for it. There’s nothing else like it around.”