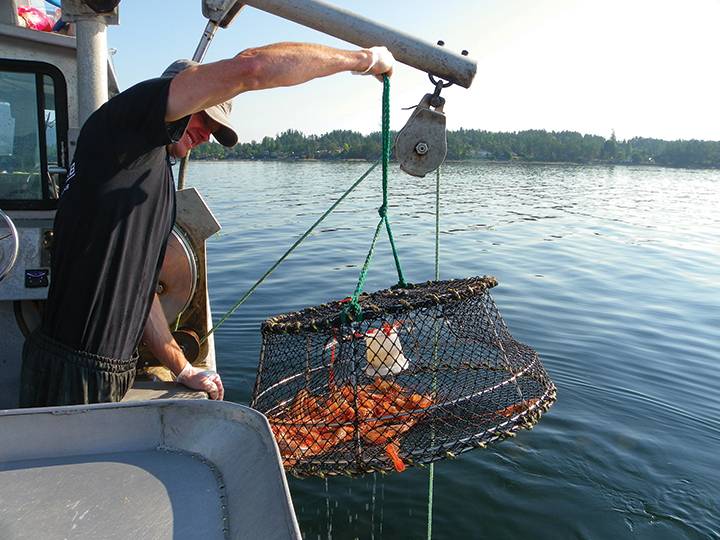 B.C. spot prawns are the sweetest, most succulent of all shellfish. They are revered by chefs and thousands of people who make culinary pilgrimages every year to spot prawn festivals across the West Coast. But there’s a lot more to spot prawns than butter dripping from your chin as you tease yet another juicy tail from its shell.

Get to Know Your Prawns
Spot prawns (Pandalus Platyceros) are denizens of the deep, living on the ocean floor. Most of them that we buy or dine on in local restaurants are caught in the Strait of Georgia, off Vancouver Island. According to Gregg Best, owner of Cowichan Bay Seafood, now also in Victoria’s Public Market at the Hudson, the fishery is conducted on underwater cliff faces at a depth of 30 to 60 fathoms deep.

These special crustaceans are protandric hermaphrodites: born male, becoming female! In a four-year life cycle, males mature around 12 months, spawn at two and a half years, then undergo a sex change, become female and spawn again — quite a trick! Between three and a half and four years old, now female, they extrude 2,000 to 4,000 eggs. Shortly after the eggs hatch, usually in March or April, the [now] female dies.

Wild B.C. spot prawns are easily recognized. They are large, often more than nine inches long, and reddish brown with white spots on the tail, white stripes on their heads and bars on their legs. You really can’t mistake them for lesser crustaceans. They live longer than any other local shrimp, which accounts for their size (the monikers ‘shrimp’ and ‘prawn’ are pretty much interchangeable, especially when it comes to commercial fishing). 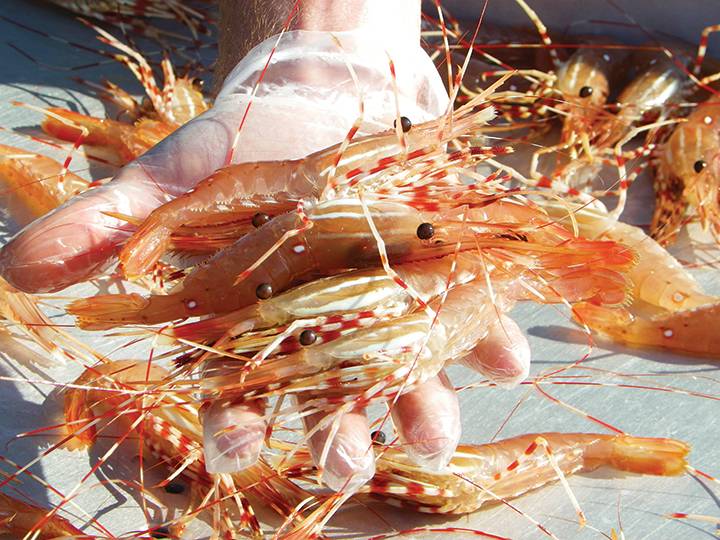 Without question, of the 40 species of shrimp harvested commercially worldwide (seven on Canada’s west coast), the B.C. spot prawn is by far the tastiest and generates the most excitement. Jeff Keenliside, executive chef at Oak Bay Marine Group’s Marina Restaurant, says, “The flavour and texture is so different from tiger prawns — there’s no rubbery texture, just that fresh little squeak and then softness and a buttery flavour.
The fact they are sustainable and local is a bonus to me.”

The comparison or — more to the point — the non-comparison to tiger prawns (often farmed in unhealthy and environmentally damaging conditions in mangrove swamps) is a common topic of discussion amongst foodies. Robert Clark, one of the founders of the Ocean Wise program, past executive chef of C Restaurant in Vancouver and owner of The Fish Counter, a sustainable seafood store, says, “They [spot prawns] are very sweet and succulent, and unlike tiger prawns, are excellent on their own — no need for cocktail sauces and such.”

Buying Spot Prawns
Spot prawns have a season and it’s very short: the fishery opens in early May and is over by late June, early July. During that time approximately 2,000 tonnes of these scrumptious creatures will be harvested in B.C.

There are a few golden rules to buying spot prawns: follow these rules and you’ll never have a bad experience. First, if you buy the whole prawn, always buy it while it’s still alive. This is important because the minute a spot prawn dies, it deteriorates amazingly quickly — something to do with an enzyme released once they die. This explains those dead prawns you sometimes see in the grocery store with blackening heads. If you cook these, the flesh will be mushy, and the flavour? Well, imagine eating just the veins (read intestinal tract) of a bunch of tiger prawns. This leads to another fabulous thing about spot prawns: you never have to de-vein them and, as long as they are from B.C., they are sashimi grade, so you can eat them raw.

Getting Ready
Okay, so you have a bunch of live prawns. Unless you are going to cook them immediately, you must be brave! Remove their heads — yes, while they are still alive. The easy way to do this is to grasp the head, give it a quick twist and pull it away from the tail. Give the tails a quick rinse, put them in a bowl, cover them in ice and pop them in the fridge. You can leave them like this for a few days, but pour off any water daily — you do not want them sitting in water.

Spot prawns freeze incredibly well, just not in fresh water. Gregg Best, who is well known for the quality of his frozen spot prawn tails, says, “We use a 50/50 fresh to salt-water mix which allows them to hold their taste well.” In a domestic freezer, they will keep for around six months, but remember to cover the prawns completely with the brine.

So, if you haven’t already thrown out the heads, don’t do it! The best flavour of all is in the heads. After a quick rinse, use the heads and shells to make delicious stock or spot prawn bisque (save a few tails to add to the bisque). Bisque, often made with lobster or other crustaceans, is a smooth, creamy, strained broth with a pronounced flavour. 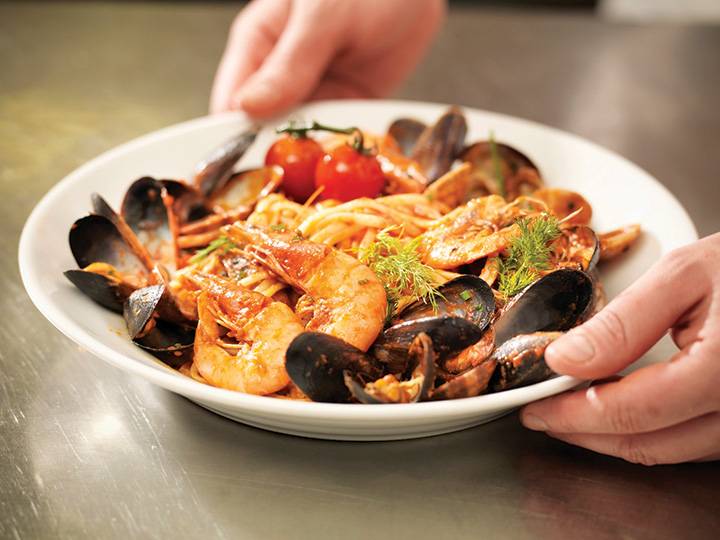 Cooking Spot Prawns
As with all seafood, simple is usually best. “I love just tossing live, whole ones on the grill,”  says Chef Clark. “If I’m cooking just the tails, I like to pour boiling salted water over them to cover, leave for 30 seconds, remove them from the liquid, peel and eat.”

Last year, Chef Keenliside entered a spot prawn cooking competition sponsored by Mission Hill Winery. “We sautéed the spot prawns in their shells in garlic butter and finished them off with preserved lemon; we served them with a cauliflower purée drizzled with a little nage to split the purée (A nage is a broth cooked with white wine, vegetables, herbs and those spot prawn heads…). It was fantastic and we had it on our menu for two months.”

The key to preparing seafood is to stop cooking when you think it’s not quite cooked. (It continues to cook on its way to the plate.) It’s a common fear that eating undercooked fish will make you ill; in reality, if the fish is wild and fresh then it need only be barely cooked and in many cases can be eaten raw (think sushi). Best says, “You should take a small piece of raw fish and taste it to see what the fish is trying to taste like — then, when you cook it, if you can have a little bit of that there when you finish, you’ve done a good job.”

When Chef Dan Hayes of The London Chef arrived from England several years ago, he was blown away by our spot prawns. “Spot prawns were a delicious surprise when I first arrived on Vancouver Island,” he recalls.

“They are so meaty and flavourful. My favourite way to enjoy them is simply grilled with their heads on. The heads are the best part. It kills me when they are not used — they have so much flavour [and make] amazing stocks, sauces and soups. I also love spot prawn ceviche.
Simple, fresh and light.”

A Sustainable Fishery
Food provenance has become increasingly important; we want to know where our food comes from, how it has been treated and  whether it comes from sustainable sources. The B.C. spot prawn fishery scores 10 out

of 10 on all fronts and is probably the best-managed and most sustainable fishery in the world. There are only 252 licences in B.C. (by comparison there are 435 halibut licences), each limited to 300 traps. Traps have strict mesh-size requirements that allow smaller prawns to escape.

To further reduce the amount of bycatch (fish caught unintentionally), traps are pulled up one at a time and the catch is sorted immediately. This allows spawning females to be returned quickly to the water, along with any undersized prawns and other non-target species. Best explains the fishermen themselves pay for an independent monitoring organization to do spawner index testing. This checks the ratio of females to males in traps. When a certain threshold is reached, the fishery closes. Each boat keeps a harvest log, a record of date, time, amount harvested and location.

B.C. spot prawns are not only listed as a “green” choice by Ocean Wise, they are also one of David Suzuki’s top 10 sustainable seafood picks, and a “best choice” by Monterey Bay Aquarium’s Seafood Watch program. However, not all spot prawns are equal; those caught in Alaska, California, Oregon and Washington are “not recommended” by Ocean Wise, and only listed as a “good alternative” by Seafood Watch. The lesson here is to make sure you are buying B.C. spot prawns; there have been reports of shops trying to pass off American prawns as of B.C. origin. Ones from the U.S. are caught earlier in the year, so are smaller and often still carry eggs.

Catching Your Own Spot Prawns
Unlike the commercial fishery, recreational fishers can catch spot prawns year round with some restrictions (check with Fisheries and Oceans for area closures). The Saanich Inlet, for instance, can be subject to a one-week closure in May and what the Ministry calls pulse fishing (two weeks closed, two weeks open) thereafter.

However, this is not like fishing for crab off the local dock. To catch these critters, you need a boat, some local intel on where to catch them, a prawn trap and strong arms to haul them up from the depths. You are limited to four traps on a single bottom line. More than three? You have to have a floating tag or buoy at either end of the ground line. Daily limit is 200 prawns.

Whether you catch your own, buy them fresh from a fish boat or from a local fish store, you are in for an amazing B.C. treat. There is an excitement about spot-prawn season, it’s a special time for anyone who appreciates real food, sustainably harvested.

Chef Keenliside sums up the spot-prawn season best, “When the season starts, they’re so fresh they’re literally jumping out of the box and out of the pan — that kind of freshness just can’t be beat.”

Using a medium-sized skillet, heat half the olive oil and butter on medium heat until melted.
Add the spinach and wilt for about two minutes. Keep warm. Heat the rest of the olive oil and butter in another skillet, add the shallot and garlic for about 30 seconds, or until aromatic. Increase the heat to medium-high and add the prawns. Cook for 30 seconds to one minute until they are opaque, then add the liqueur and season to taste. To serve, divide the spinach onto four plates and place the prawns on top.