Graham and Ashleigh Newmarch bring the world of alternative high fashion to Victoria. 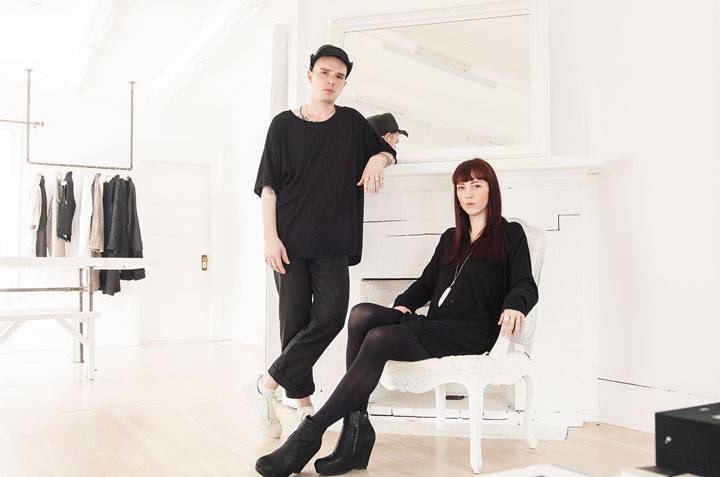 For Graham Newmarch, a Shakespearean actor by training, the most exciting part of the theatrical process was always dress rehearsal.

“Whenever I was in a play, as soon as I put the clothes on, it dictated so much about the character,” he explains. “For me, clothes have always been an exploration of self, the kind of self you want to show the world. It’s also about getting to know yourself.”

Ashleigh — his wife and partner in Calculus, their high-fashion showroom in Victoria — also experimented with “costuming” to develop her personal style.

“We both dabbled with dressing to stand out when we were young, and our younger selves would probably think we’re quite frumpy now,” she says with a laugh. “It’s really essential to do that costuming; to wear a lot of things and explore different characters. And whether you’re getting negative or positive attention, you notice. Once you distill what you like, that costume becomes your uniform. You get to that place of feeling great and not having to think about it. That’s the golden ratio.”

Calculus is located in Ashleigh and Graham’s renovated 1903 Arts and Craft home in Oak Bay. The majority of their sales are online, but local “fashion geeks” have been known to make an appointment to check out the high-end garments rarely seen in the city. The two also run re. porter, an online consignment store of curated avant-garde and artisanal high-fashion menswear.

Both Calculus and re. porter carry some of the alternative designers, such as Rick Owens and Ann Demeulemeester, whom Graham first discovered in the early 2000s, when he was indulging his obsession with clothes on Internet discussion forums superfuture and StyleZeitgeist.

“Ann Demeulemeester was all dark poetic punk and romance, and that’s what I loved about it,”

Graham says. “I still feel like I dress in alternative fashion, but the embodiment of that has changed a bit. That does have a little bit to do with being 33 and a homeowner.”

Graham describes his esthetic now as “alternative high-fashion Belgium streetwear,” while Ashleigh loves a sense of uniform and is drawn to bigger, breezier silhouettes.

“We love pieces that you can wear a lot,” Asleigh says. “If I love something, I want to be able to wear it all the time.”

This means that dressing up doesn’t look much different from everyday wear, with Ashleigh wearing her favourite outfit and Rick Owen wedges to the pub or to the opera.

Both say that while they have been wearing a lot of black for many years, they were drawn to the natural, undyed cream linens on their recent buying trip in Paris.

“Fashion has become so democratized. I’m sick of people thinking they can take any [piece of clothing] and wear it in black and that makes them cool,” Graham says. “I hate to admit it, but I do have a deep desire to be different than the mass population of people — so I’m going to have to start wearing more colour.”

As Ashleigh puts it, their style is their “little bit of self-expression.”