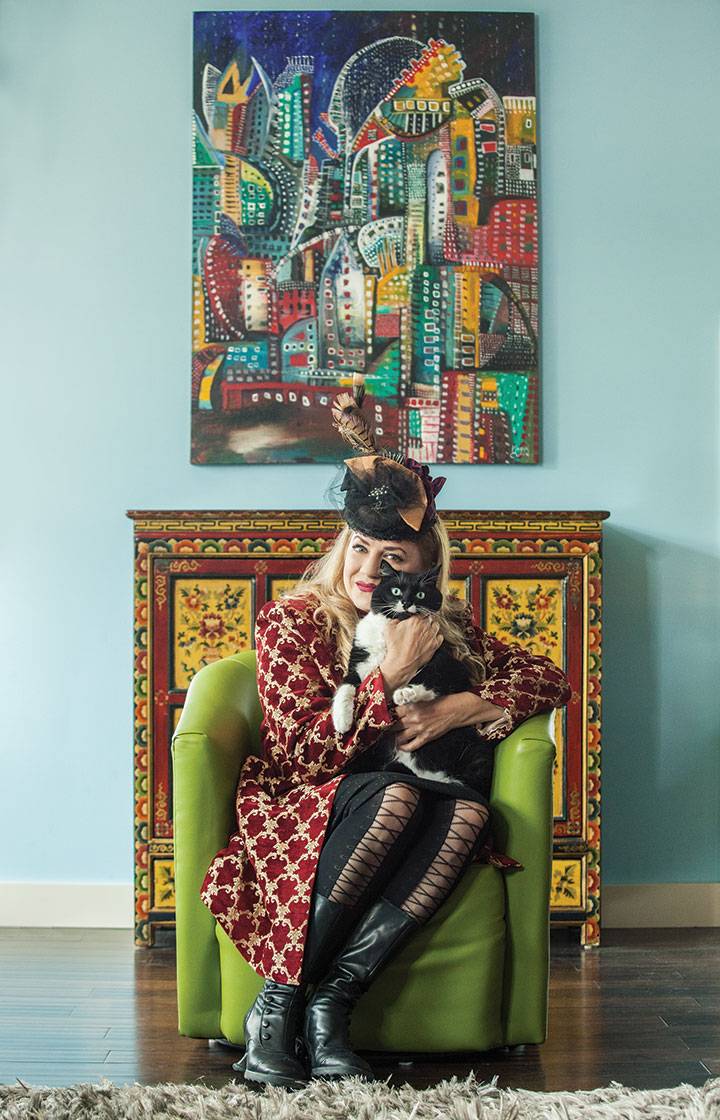 Milliner Maria Curcic photographed at her home in front of her painting “Underground Movement,” wearing a jacket by Nea Sandi and one of her own hat designs. PHOTO: JEFFREY BOSDET

As morning rituals go, Maria Curcic’s sounds pretty enviable. She stands in front of one of her two huge double-wide closets and selects whatever appeals from the colour-coordinated sections. It’s a cornucopia of pattern, in lush fabrics and textiles — much of it vintage — collected for more than three decades.

“Fashion should be expressive and intuitive,” Curcic says. “It’s about expressing your own personal style through clothing and accessories … mine is eclectic and eccentric.”

That wide-ranging aspect of her style extends to her career, which includes hat-maker, painter and DJ.

“These are the three things I have always done to make my living as an artist — and it is work,” she says.

Curcic was born in Paris, and although she moved to Calgary when she was eight, she says her time in France was very formative.

“My mother always had me in hats and special little outfits when we ventured to go shopping or to get our bread and cheese at the market,” Curcic says. “She is a seamstress and always made me aware of the fashion around me.”

Her mother also taught her to sew and bestowed the important lesson that “no matter how one dresses, an accessory will always finish the outfit.”

A visit to Paris when Curcic was in her teens resulted in a visit to a milliner — a friend of her mother’s — and that was when Curcic first learned to make hats.

“I was designing hats for a friend’s store in 1988 [in Calgary], and after several years of growing popularity, she encouraged me to open my own store,” she says. “In 1994 I opened my shop, Le Chapeau Rouge.”

Today, based in Victoria, Curcic creates custom designs for clients around the world. But not all of her hats make it far. Curcic loves dressing up, and the finishing touch is often one of her own creations.

“Dressing up means ‘play,’” she explains. “And I always accessorize with a hat. I make pieces and I fall in love with them.”

Not surprisingly, Curcic doesn’t subscribe to trends and has a particular dislike for denim, which she blames for killing fashion. She thinks people need to open their eyes to all the accessible things that designers are actually doing in the fashion world.

“Shredded denim, athletic wear, hoodies and flip-flops are not really fashionable, just highly marketed,” she says. “People should experiment with their clothing. There’s not enough colour in people’s wardrobes.”