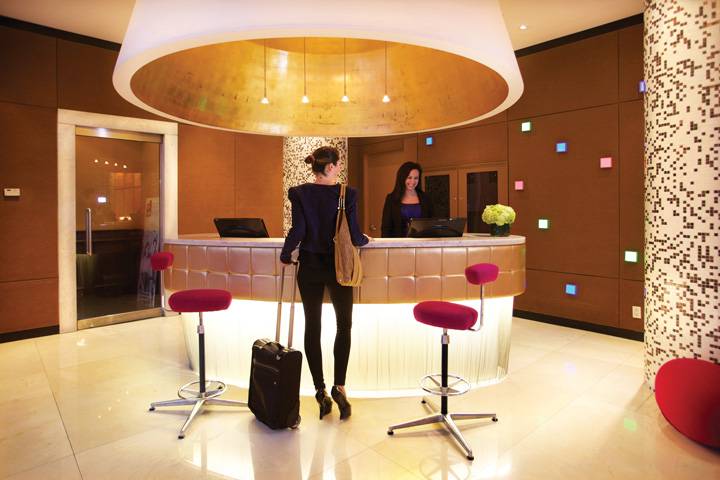 The lobby at the OPUS features minimalist elements such as the white marble floor and simple light fixtures, mixed with bright, unexpected colours and mosaic pillars.

The OPUS Hotel doesn’t do traditional. That much is made clear before we even walk through the glass doors of the seven-storey brick building in the heart of Vancouver’s hip neighbourhood Yaletown. There’s a mural by local painter Cathy High painted on its west-facing wall, unveiled this July in honour of the hotel’s 15th anniversary and Canada’s sesquicentennial, paying homage to Canada’s First Nations history. High’s piece was inspired by the Kakaso’Las totem pole carved by Ellen Neel for Woodward’s Department Store in 1955 (now displayed in Stanley Park). It depicts a Dzunukwa or Wild Woman of the Woods, confident and feminine, wearing bright red lipstick. Above her, a message: Love me. The mural is bold and sassy, something we’ll come to realize embodies the whole OPUS experience.

The OPUS is a stylish, striking hotel that’s received some of the highest accolades in the business. It’s Vancouver’s only Forbes four-star boutique hotel, and it received the Gold List Award from Condé Nast Traveler in 2016 as “THE place to hang out, kick back and embrace the fashionable jetset lifestyle.” Having arrived in Vancouver by Helijet on a warm, cloudless day, we agree.

Inside, we’re welcomed to a sophisticated yet playful space featuring large mosaics by the Vancouver- and New York-based artist Jason Dussault, and purple Herman Miller chairs in the lobby, where floor-to-ceiling windows shower the room with natural light. We feel like it’s the kind of stylish lobby where creative A-list celebrities would feel at home. Turns out, it is. At check-in, Nicholas Gandossi, the hotel’s general manager, explains that the OPUS has hosted the likes of Lady Gaga and Cher and, most recently, Johnny Depp. 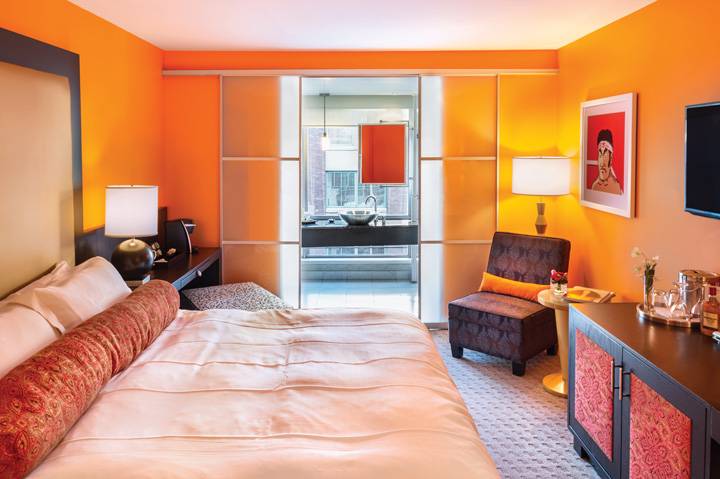 The guest rooms are inspired by different fictitious muses, meaning each room has its own personality. From daring artwork and dramatic faux-fur fabrics to a yellow-and-orange colour scheme, guest rooms at the OPUS can be complete opposites.

Open since 2002, the OPUS completed a full design refresh of its 96 guest rooms in 2013. Managed by Vancouver-based interior designer Robert Bailey, the design imagines five fictitious muses. Each room is meant to embody a persona, so there are five different bold colour schemes, layouts and specially curated playlists to be listened to on the in-room iPad. Artwork by one of five local artists, such as Taizo Yamamoto and Mark Mizgala, is shown throughout the guest rooms, giving a peek into the Vancouver art scene.

“Each room is different and it’s a personalized, unique experience. We wanted something that makes the stay memorable and that guests won’t get anywhere else,” says Gandossi.

In our room, Vancouver street scenes painted by Tito Kerr hang on the walls and demand attention, even amidst the bold décor: the walls are a seductive raspberry, and there’s a loud L-shaped couch with a pink-and-orange looping pattern.

We make the most of happy hour at the OPUS Bar, which runs daily and features appetizers by Travis McCord, chef of the hotel’s adjoining restaurant, La Pentola. We admire the brazenly glam design of the bar, redone in 2015 and also overseen by Bailey. There are blue mosaic pillars framing the bar, more local artwork on the walls — we were amused by Jason Dussault’s mosaic interpretation of Justin Trudeau — and furniture with geometric textures and patterns. 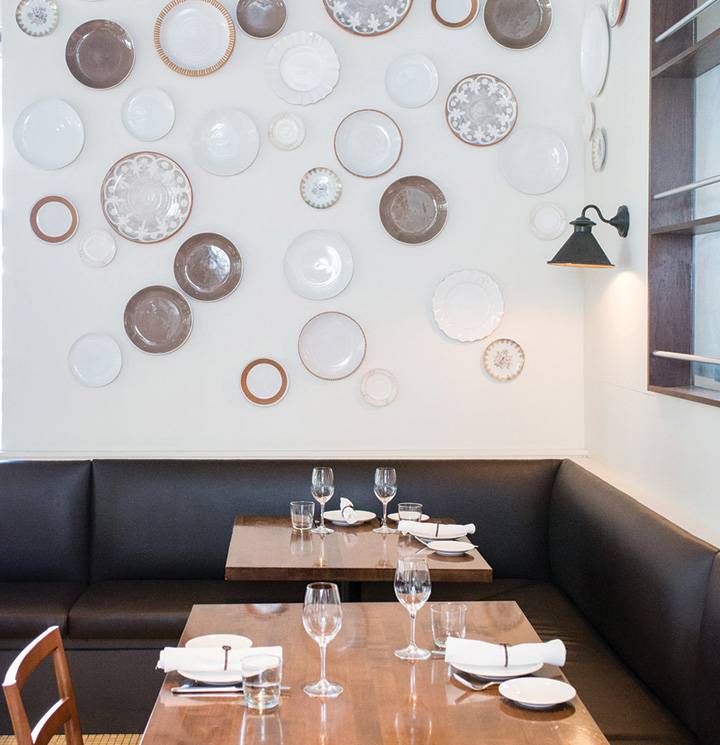 The OPUS’ adjoining Italian restaurant, La Pentola, has attention-grabbing style elements, like this assortment of plates hung on a wall.

The Yaletown-Roundhouse stop on the SkyTrain’s Canada Line is directly across the road from the OPUS, meaning we had easy access to the plethora of restaurants, bars and cafés throughout the city. And Yaletown itself is home to more than 60 eateries — including Yaletown Brewing Company just one block from the hotel — as well as boutiques and galleries. We are spoiled for choice when it comes to dinner options, but why leave when an award-winning restaurant is within the hotel walls?

Dinner is at La Pentola, and while McCord’s Northern Italian menu with dishes like Tagliatelle Bolognese and Spaghetti Carbonara with house-made pasta is a hit, the room itself is also a star. Also designed by Bailey, La Pentola has a relaxed vibe where high style is still the focus, hence the hanging copper-bowl feature above a horseshoe bar, and an assortment of plates hung tastefully on a wall next to large bay windows.

Instead of the conventional mint, the OPUS keeps things unexpected by leaving retro treats like Pez and Pop Rocks as bedtime snacks. Returning to our room, we find mini Mars Bars on our pillow.

There’s nothing conventional about OPUS. The brick-and-glass building may not stand out like other towering buildings in Vancouver’s downtown, but for those in the know, this almost-hidden gem rewards guests with a trendy, cultured atmosphere that won’t be easily forgotten.