It’s safe to say that tequila has been given something of a bad rap over the years. It’s an undeserved one, as far as I’m concerned. Though anyone who imbibes has likely had some encounter with an alcoholic beverage that’s left — ahem — a lasting impression, tequila seems to be a very polarizing beverage.

On one hand, who doesn’t love a delicious, well-made margarita paired with spicy Mexican fare? The interplay between tart, salty and sweet, with the slight smokiness of the tequila, can be sublime. On the other hand, a night spent celebrating Cinco de Mayo with shots of cheap Cuervo Gold in your university days could well have put you off the stuff for good. I get it.
But please read on, because tequila can be just as flavourful and elegant as a fine whisky or rum. Just don’t ever think about putting it in a shot glass. 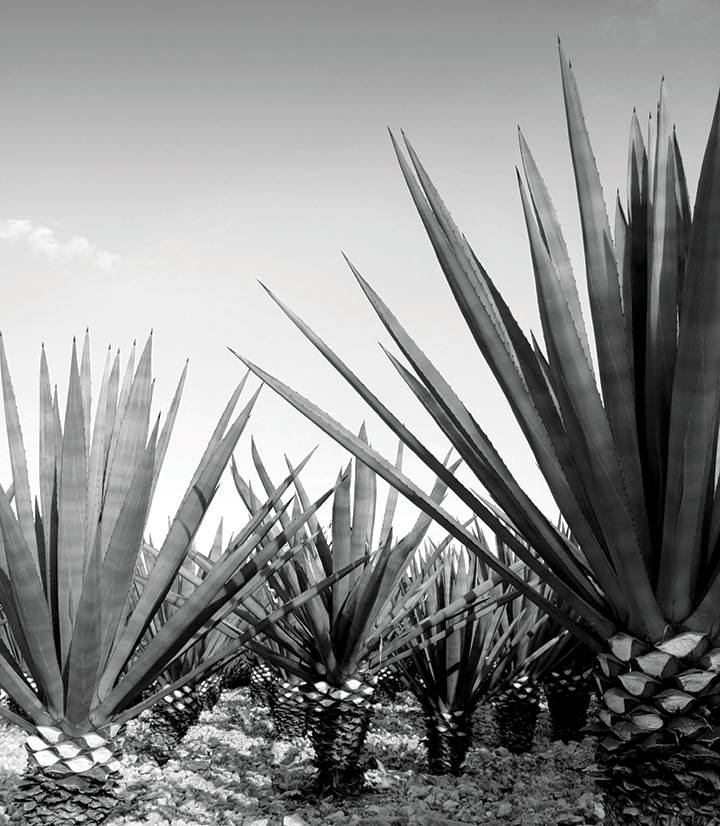 All About Agave
The first bit of wisdom I can impart is that all tequila is not made the same, and that once you are no longer on a university-student budget, you shouldn’t ever buy one that doesn’t clearly say, “made from 100% agave” on the label.

The cheap stuff is made with sugar and food colouring in addition to agave and is not an accurate representation of how fine tequila should taste. It’s acceptable, though not recommended, for margaritas, but the difference between a $30 and $75+ bottle of tequila is (and should be) significant.

Agave is a large succulent plant with spiky “leaves” that’s native to certain parts of Mexico and the U.S. Southwest. It looks a bit like a giant aloe plant, though the two aren’t related. Many parts of the plant are edible (most notably the sap, which is a natural sweetener). Tequila is made from the heart of the plant, or the piña.

Skilled harvesters use sharp moon-shaped blades to slice off the long leaves so that only a large pineapple-looking chunk weighing between 70 and 100 kg remains. The piña are then slow roasted to bring out the fermentable sugars. The juice is extracted, fermented and then distilled twice to get “silver” tequila.

Silver tequila is typically best served in cocktails since it is the rough and ready version of the spirit — even if it’s 100% agave. You get some of the smoky/fruity flavour of the agave, but it’s not exactly smooth enough for sipping. Still, the difference in making any kind of mixed drink with high-quality silver tequila versus a cheapo that’s not 100% agave is significant. Best not to skimp.

Like most spirits, a little barrel aging softens the edges of the alcohol, adds complexity and imparts colour and flavour. There are primarily two kinds of aged tequila made in Mexico: reposado and añejo. Reposado is barrel aged for a minimum of two months, but less than a year; añejo is aged for at least one year and less than three years. These are sipping tequilas, no doubt a foreign concept to anyone who’s ever found themselves on the bad side of a bottle of Cuervo.

Proof is in the Snifter
Skeptical? Put a couple ounces of, say, Don Julio Reposado in a snifter, let your hand warm it and take a whiff. It’s an amazing bouquet of spice, subtle fruit — citrus and pineapple — and a smoky earthiness. The flavour is equally interesting with hints of caramel and vanilla imparted via the barrel aging. Sipping tequila needs no water or ice added to it. Just enjoy the gentle complexity of it on its own.

A fine añejo has many of the same characteristics, though it tends to be a little heavier on the flavours and aromas imparted by the barrels. On the palate, it’s quite smooth and very sippable, like a fine cognac.

While many of the subtleties of reposado and añejo can be lost when used in cocktails — much like single malt whisky, for instance — mixologists are finding ways to make upscale versions of margaritas and other innovative drinks where the understated characteristics of barrel-aged tequilas can shine through and be emphasized.

I may not be able to change your mind about tequila if a past overindulgence has left you with an aversion. I can, however, assure you that the experience premium tequila offers is significantly more sophisticated and pleasant, and requires no saltshakers, lime wedges or shot glasses.

The name of this drink translates to “white dove” and is a riff on the popular mexican drink, Paloma, which is typically made with silver tequila, grapefruit soda and a twist of lime. I swap a less sweet Radler — a low-alcohol grapefruit juice/wheat beer combo — for the grapefruit soda for a crisp, refreshing alternative.

Fill a highball glass with ice. Pour the silver tequila over it. Add a splash of Triple Sec and top up with Grapefruit Radler. Stir gently and garnish with an orange slice.