YAM writer Moira Dann shares which pieces of public art she loves, which ones she likes a little less and why she thinks public art is a positive addition to our city. 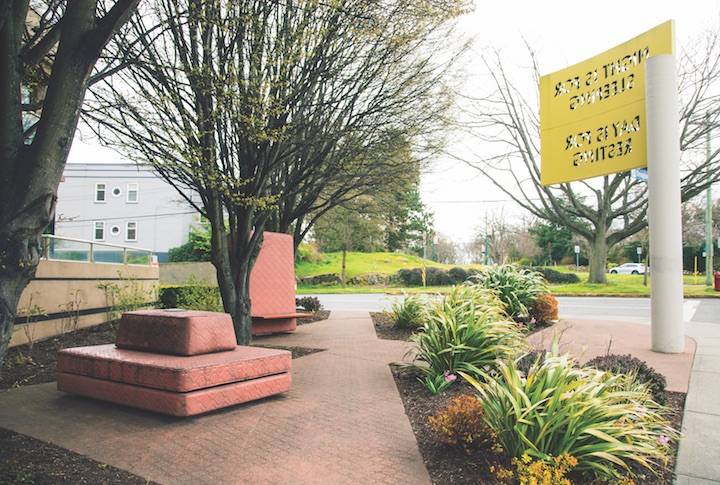 Night is for Sleeping, Day is for Resting, Mowry Baden. PHOTO: JEFFREY BOSDET.

I recently had the following conversation with a friend while we were walking toward Beacon Hill Park along Douglas Street, just past Belleville. It started when my friend asked:

It’s a mattress, an art mattress made of concrete, on its edge. With a wooden ledge for sitting.

It’s part of an art installation, a sculpture; Day is for Resting, Night is for Sleeping, I think it’s called.

Oh, I drive by those signs every day. I didn’t get what they meant.

Well, that’s it. The signs. The mattress. And the sit-upon thing.

Do you know what it means?

I think it’s this: It’s best if you sleep at night, but it’s still important to chill during the day.

Did you look that up?

Sometimes I think I do. But not always.

Public art civilizes its surroundings and makes being alive in the world worthwhile, but it always, always creates controversy if it’s doing its job. Public art is primo proof of the saying: Beauty is in the eye of the beholder. And chacun a son goût. Public art is fraught.

To come clean before I spout off, I must tell you that I was on the committee behind the commissioning and installation of Our Emily, the statue of artist Emily Carr at the corner of Government and Belleville, on a corner of the Fairmont Empress hotel’s property. It was unveiled in October 2010 and garnered both praise and criticism. Some didn’t like that, even though Emily is shown contemplating the harbour view of her hometown and preparing to sketch (or write?), the choice had been made to depict an older, more (some would say) eccentric Emily, with her monkey, Woo, on her shoulder and her dog, Billie, at her feet.

I’ve heard what critics have to say and I’ve watched people engage with Our Emily:
little kids climbing aboard Billie as though the little dog were a horse and rubbing its bronze-brown body to a shiny gold patina; babes-in-arms pointing up at Woo and laughing; adults rubbing the toe of Emily’s boot for luck and reading the plaque to learn about who this woman was (and is). I’ve never seen anyone just walk on by. And I think that’s great. 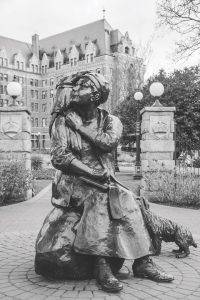 But that’s me. I’ll bet there are plenty who wonder who decided the Mowry Baden sculpture Night is for Sleeping, Day is for Resting sculpture I chatted about with my friend was just “that thing” adjacent to the Q apartments on Douglas. It is public art, privately owned but is was a “rezoning amenity,” which means a deal was negotiated with the city by a developer.

That’s also the kind of deal that was negotiated for Tap Route, the most recent bit of public art to draw fire. It’s a large aluminum piece by Illarion Gallant on the front of 819 Yates Street, a Chard Development residential building.

I love Tap Route. It reminds me of a human skeleton: a ribcage with metal limbs reaching both up (to the sky) and down, to be grounded, rooted in the earth.

I didn’t know until I looked it up that Gallant was also the artist behind other disparate public art pieces in Victoria: the mosaic in the sidewalk near Vancouver Street in Harris Green, the big stone avocados outside the Hotel Grand Pacific, the swoopy stone box with the manhole covers, and the drinking fountain on Douglas near Yates, and most particularly, the sculpture in Bastion Square. 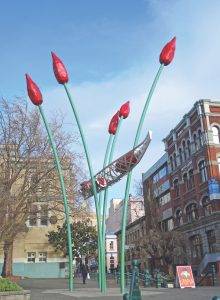 Speaking of Gallant’s Bastion Square art, it’s a bit perplexing when you first approach it, but you’re drawn inexorably because of the bright red … thingies (nascent blooms? seed pods?) atop tall, green stems. It’s all so bright against either a grey Victoria sky or a blue Victoria sky, and the 12-metre (36-foot) height forces your eye up, away from the boring old beauty of the harbour and the water. And then you realize the long vessel halfway up the stem, holding more red buds, is a CANOE! How perfect for this harbour on the continent’s west coast, this nexus of transportation and trade. And the title — Commerce Canoe — also perfect.

But What About the People?

Victoria is too young to have a surfeit of what I call “Great Man” statuary, such as Captain James Cook (which I like; he’s so stoic about the pigeons on his head) by Derek and Patricia Freeborn on the Upper Causeway. There’s also a monument to Scotia’s immortal bard Robbie Burns, which was “erected by his admirers” in Beacon Hill Park early in the 20th century, but the bronze of Burns (along with Highland Mary) is a quandary of scale: it’s atop such a high stone plinth, it makes me wonder if his admirers ran out of money.

The bronze statue marking the 25th anniversary of Terry Fox’s Marathon of Hope is another question of scale that confounds me. Located near Mile Zero at Douglas Street and Dallas Road, the Fox statue is often surrounded by tourists and ringed with floral bouquets, but its placement at the site, and its size relative to the location, make it seem as though it’s in the wrong place. 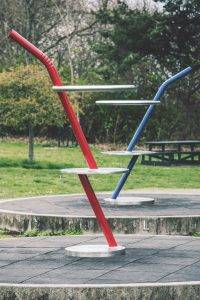 Just metres away, next to the Harrison Yacht Pond, is a delightfully playful sculpture called Glass Half Full, by Tyler Hodgins. It offers the impression of two glasses of water, one with a red straw, the other with a blue. Both appear half full (or half empty, depending on your mindset). It’s a climbable kinetic sculpture that twirls, and I remember it used to have spangly sounding chimes (although it didn’t make any noise when I recently visited and whirled it around).

The worst reaction most public art in Victoria elicits from me is a “Hmph,” and a confused cock of the head. I appreciate what the artists are trying to do and I understand the work and the imagination that goes into each creation. I know that the piece has already succeeded if it’s engaged me long enough to think about it; I don’t have to love it or even like it.

The only piece I actively dislike, even as I love the setting and the sentiment (if not the sentimentality) is the privately funded Inner Harbour sculpture by Nathan Scott (who also created the Terry Fox sculpture) called The Homecoming. The reason it gets up my nose is a detail I can’t buy: the little girl running toward her returning sailor father has her little arms flying behind her. I’m sorry, but if I’m a wee girl who hasn’t seen her daddy in ages, I’m running toward him with arms stretched out in front of me, ready to grab him around the neck in a killer-diller hug. 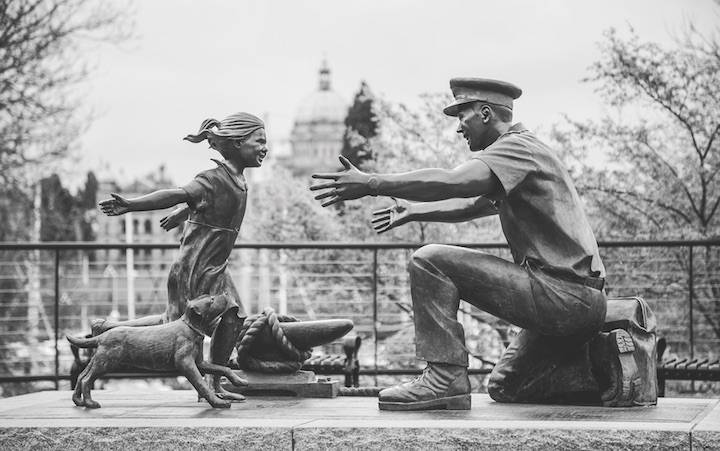 Many have tried to disabuse me of my hugging-mechanics belief that ruins The Homecoming for me, but so far, no dice. Other people like it, so there’s that chacun a son goût idea again.

I also love the Unity Wall mural at the Ogden Point breakwater, particularly for the contributions of young artists working under the mentorship of revered First Nations artists Butch Dick and Darlene Gait. It has been great to see it emerge slowly and beautifully, in stages, and to know it is visible to those at sea as well as those on land.

So while it can always do better, Victoria is executing its public art requirements admirably. Money is committed long term to the artistic process, its creations, and their maintenance. Not too many permanent “great man” statues, not too much work that is too transient. A reasonable mix of artistic modes, yet with room still for some risk taking.

I would like to see more work by women artists, younger artists and people who aren’t in the mainstream. Even occasionally artists from outside Victoria, outside B.C., outside Canada even, to get a sense of how we’re perceived by outsiders.

If that teeny statue of Robert Burns could talk, it might remind us (with a Scottish accent) what a providential gift it would be to “… see ourselves as others see us.”

And that is the great gift of public art.