“Third time’s the charm” might seem an odd expression when it comes to home building, but it perfectly describes how two long-time Salt Spring Island residents realized their dream home. Having already built two homes on the Island, the pair turned to an architect and an interior designer for help when they found the perfect wooded site overlooking Samson Narrows.

“The esthetic is West Coast Modern, which to me means that the design acknowledges the climate, our nuanced light and the site, and uses indigenous materials,” says architect Michael Geary. 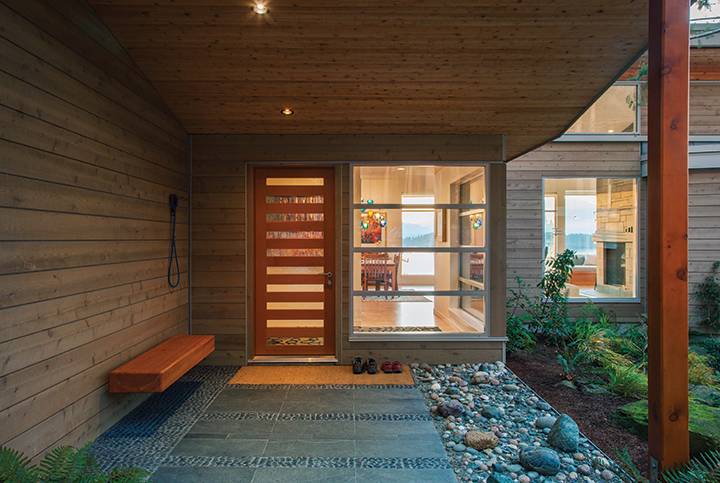 The homeowners have hundreds of interesting rocks and shells collected from their adventures around the world. When they built the house, they included a special channel to the right of the entry for these rocks and shells, and add to it after each trip away.

“When standing in the kitchen, dining room or living room, or indeed any of the key living spaces, one sees and feels the grass slope, the oak trees and, of course, the water and all the stunning changes of light. I wanted this house to capture all of this. I wanted the house to appear, from all angles, as though it was meant to be there.”

In building the house, the homeowners and Geary wanted to preserve as much of the original beauty of the unique southwest-facing site as possible, leaving many of the rock formations, arbutus and oak trees.

To achieve this, Geary designed the home in three parts: the main house, a studio and guest wing to the west and the master bedroom and ensuite to the east.

“Dividing the building into three pavilions minimized the level changes and achieved other key goals,” Geary says. “[The homeowners] wanted to see the broken-rock formation from this studio and have the master bedroom — particularly the ensuite bathtub — to be private while surrounded by arbutus and Garry oak trees.”

The homeowners also wanted to bring a modern feel into their décor and found designer Trish Puckett, then consulting through Gabriel Ross, to push them out of their comfort zone.

“They had this beautiful crafted wood furniture that looked more traditional and they wanted to mix it with a more modern, edgy look and that was where the challenge was for them,” Puckett says.

As the project was on Salt Spring and Puckett is based in Victoria, much of the consultation was done through email, photographs and texts, with an occasional site visit.

A major way that Puckett assisted with achieving the final look is through the lighting, particularly the striking Bocci lights seen above the dining table and over the day bed.

The end result is something Puckett calls “a comfortable, West Coast, beachy modern.

“There are a lot of soft blues and greys and lots of light. And there are many spaces that invite curling up and soaking in the views.” 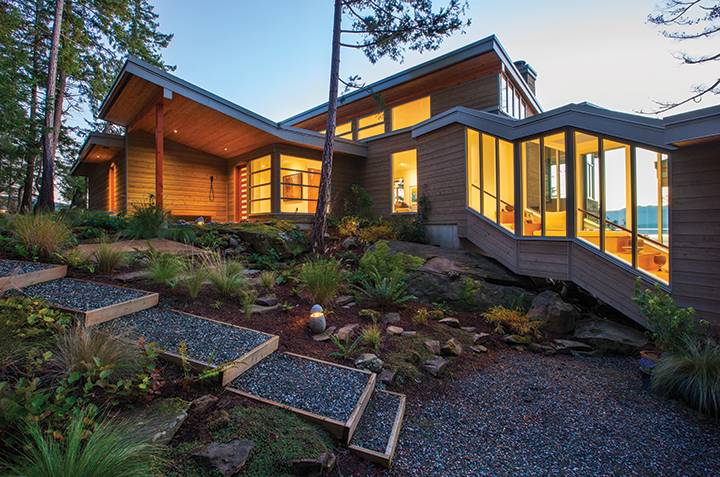 The house sits on a scenic, sloped mid-bank waterfront lot. When it was being built, architect Michael Geary avoided blasting to remove the natural rockfall by designing an elevated glassed-in bridge to connect two parts of the home. The upper section contains the main living area, with wide gradual stairs leading down to the studio pavilion, which also has a guest bedroom and bathroom. 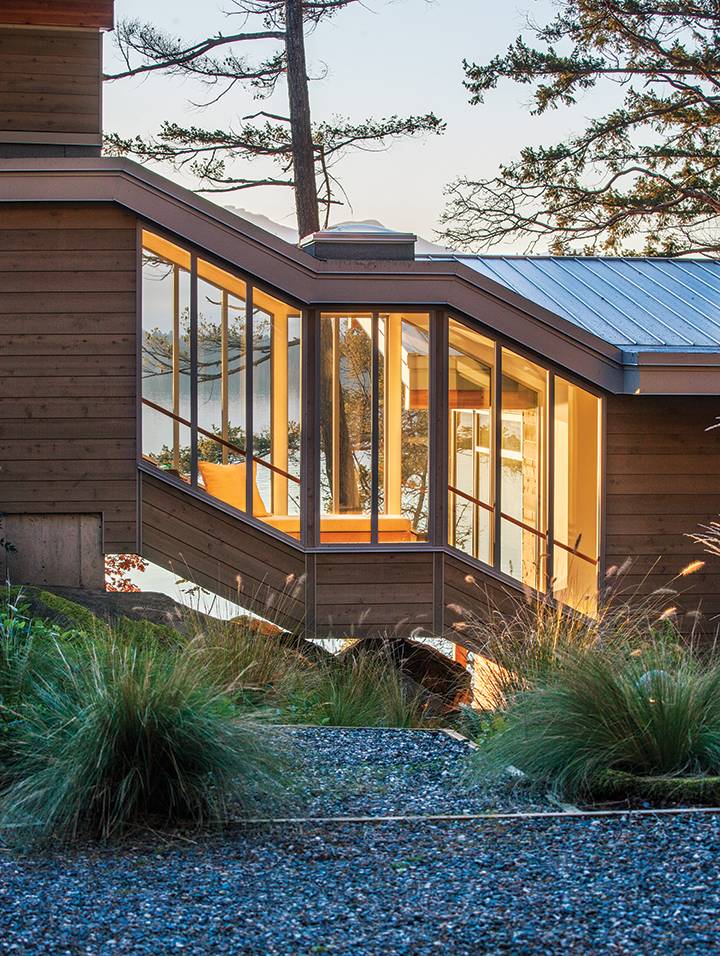 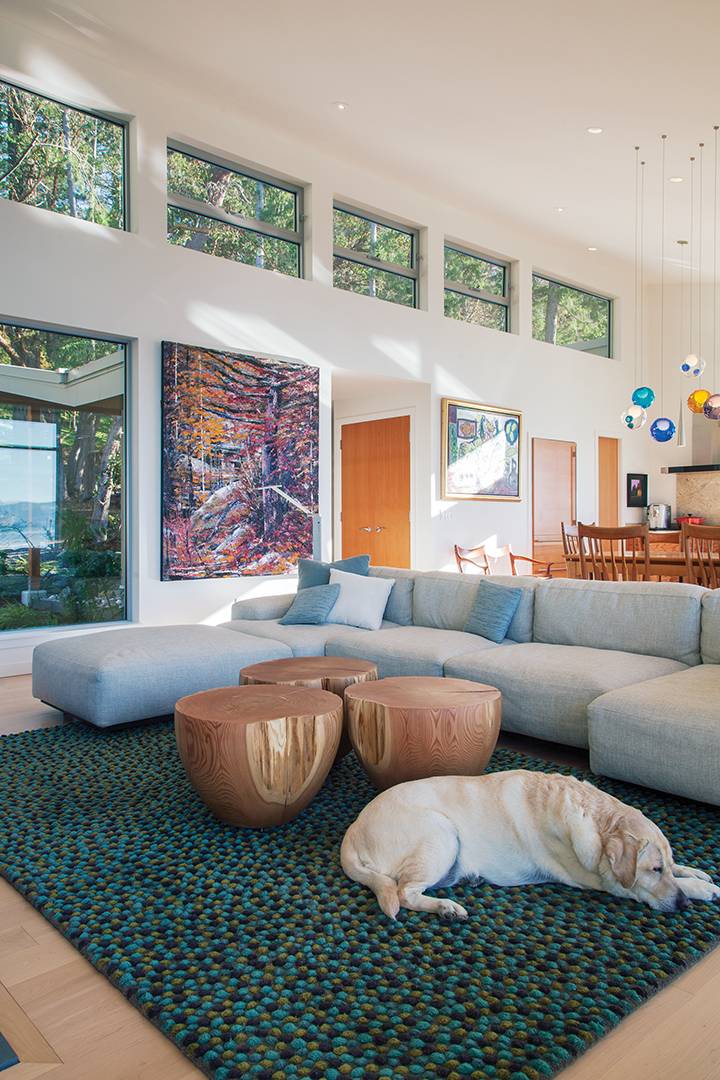 A challenge for the homeowners was how to mix edgier pieces in with their existing traditional wooden furniture, and Brent Comber’s drum tables work by using a traditional material in a way that feels modern. The tree painting by John Barkley echoes the striking forest views. Indy, the homeowners’ dog, loves to nap in front of the fire. 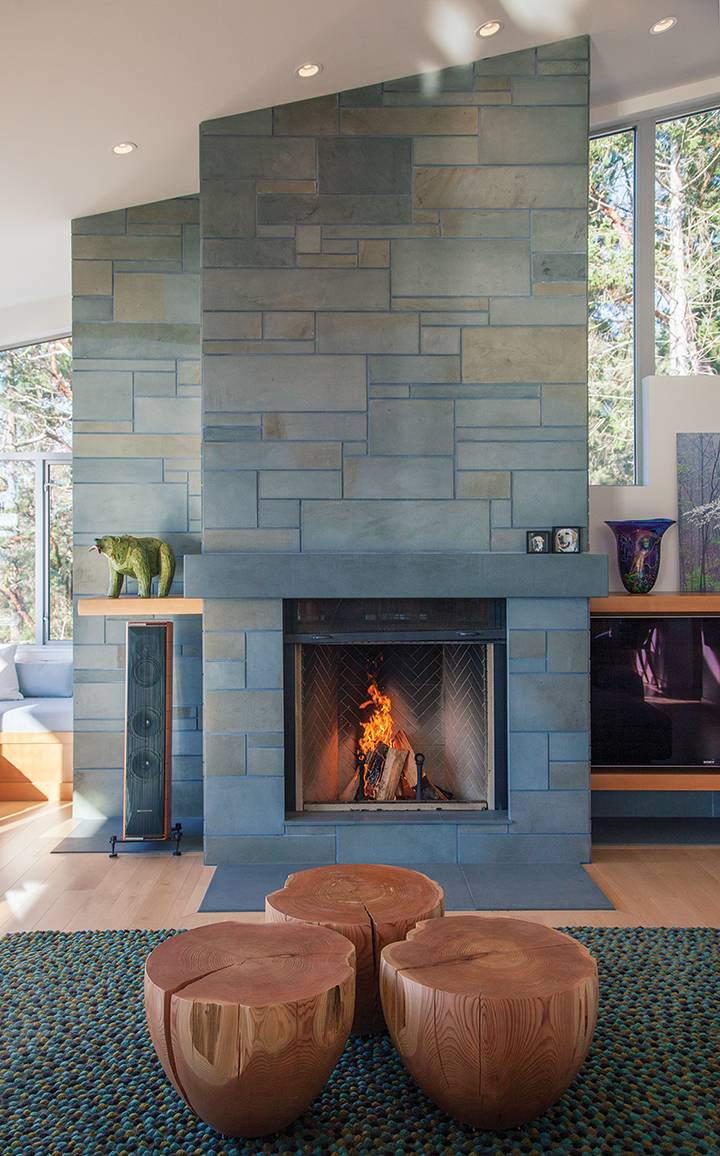 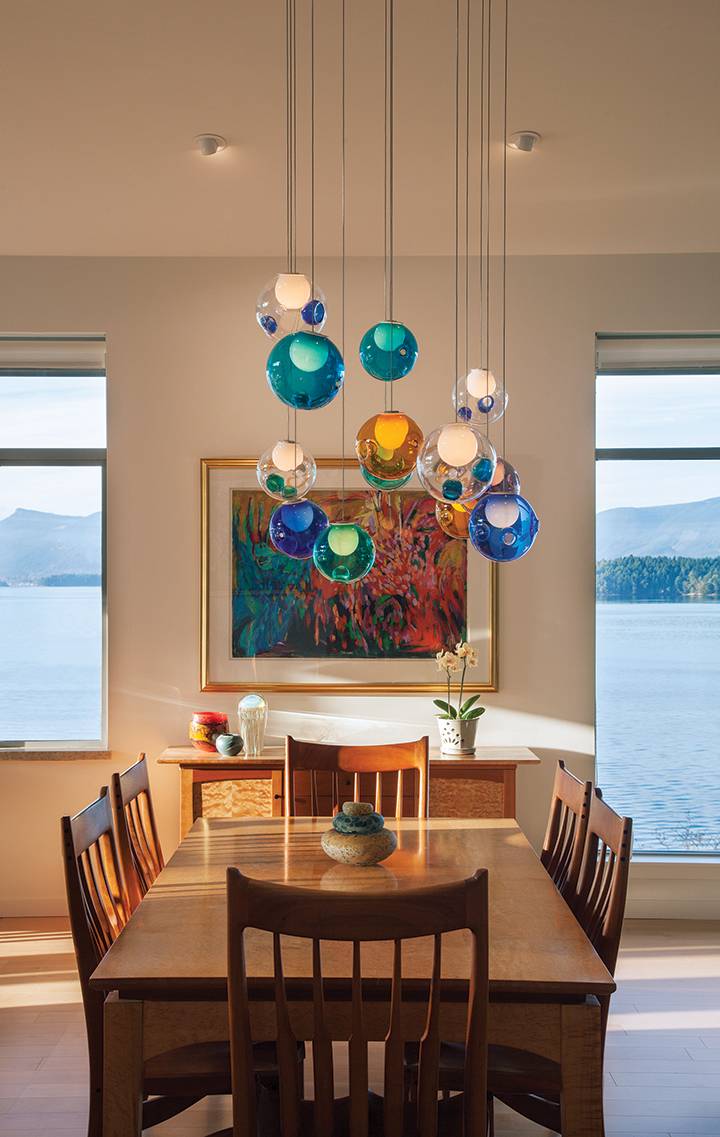 The Bocci suspension lights from Gabriel Ross may seem delightfully random, but the layout was conceived by designer Trish Puckett, and each light was individually wired into the drywall by the electrician. The colours are complemented by the painting by Quebec artist Élène Gamache. Handcrafted wood pieces by Jesse Fisher Fine Woodworks can be found throughout the home. 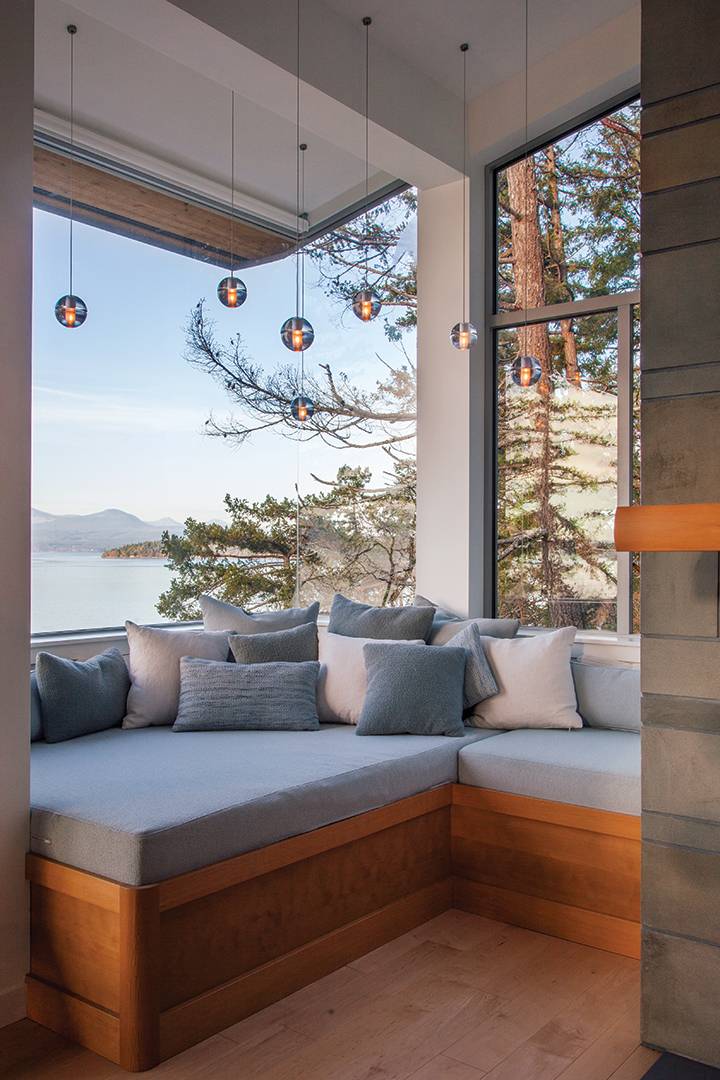 Designer Trish Puckett and the homeowners point to the glassed-in day bed-area off the living room as their favourite part of the home. Its corners are pieces of glass edged up next to each other, so no framing obstructs the panorama. It is outfitted with a custom mattress and cushions from Fawcett. Tiny suspended Bocci lights add to the dreamy quality of the space, which the homeowners describe as like being in a treehouse. 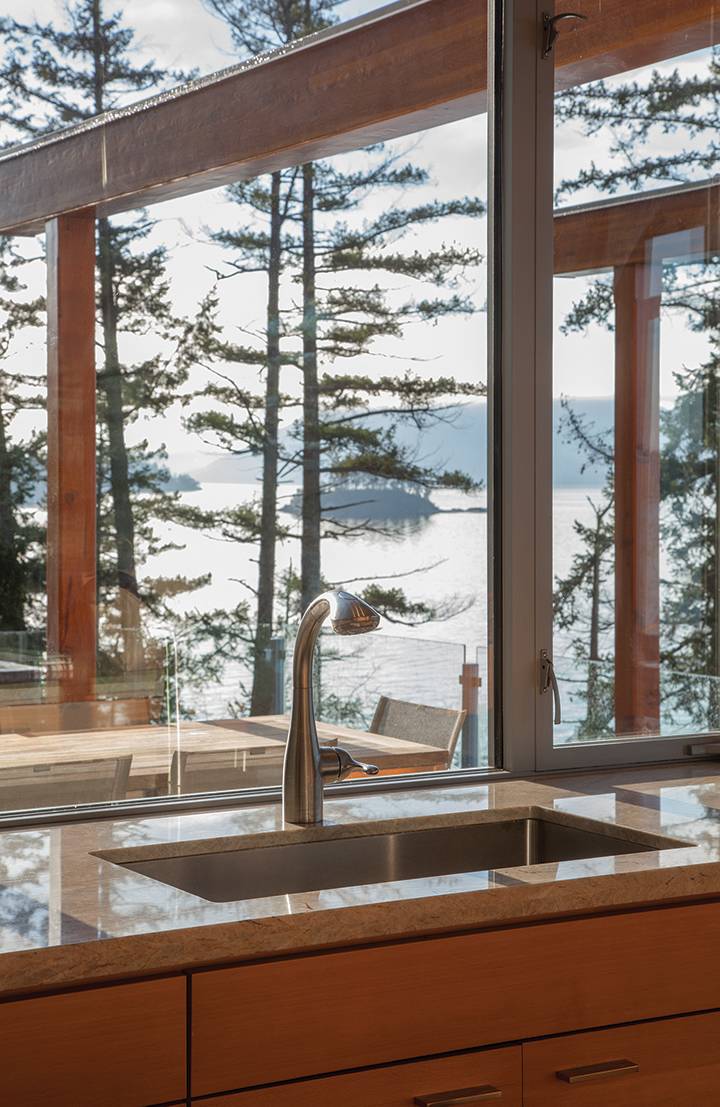 The incomparable view offers incentive to do the dishes as the kitchen sink overlooks the water and the outdoor dining area. Elements such as the kitchen fixtures from Victoria Speciality Hardware and the Wolf appliances from Y. Franks strike a balance between the modern and traditional. 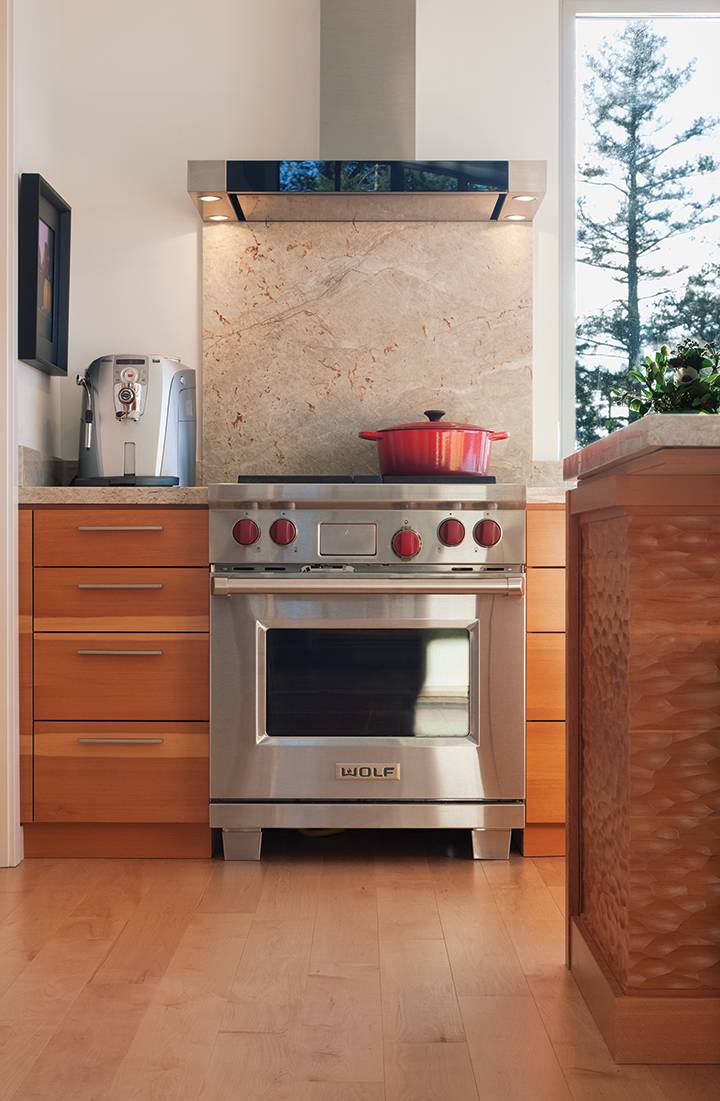 Both kitchen countertop and stove backsplash are a rare natural quartzite chosen both for its light colour, which doesn’t over power the room, and for its interesting character. 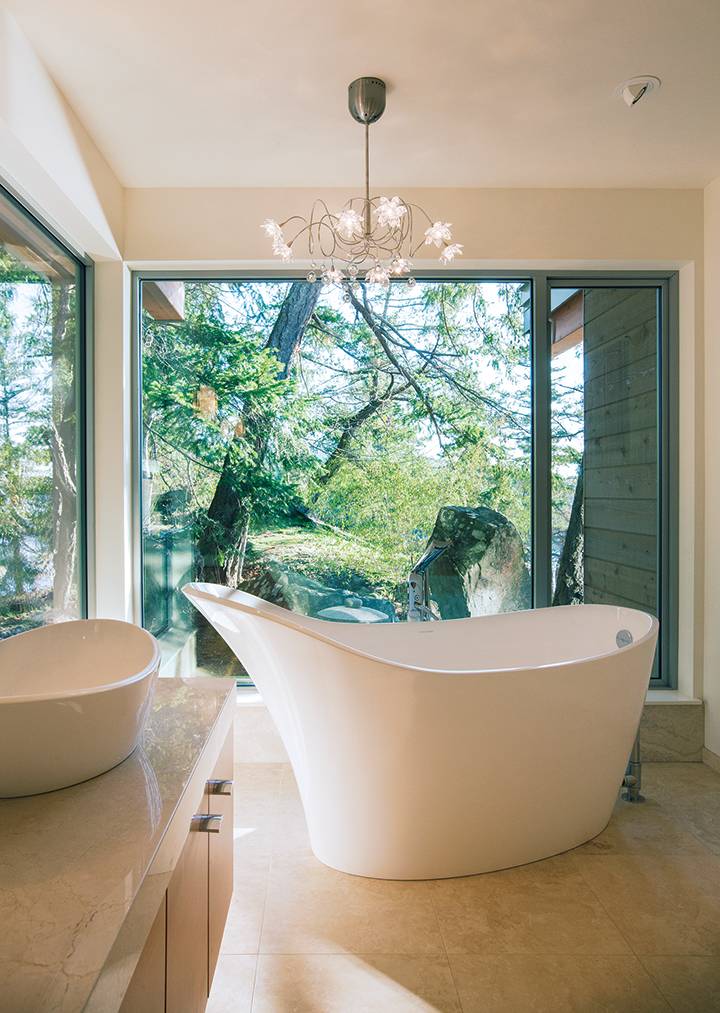 The extreme privacy of the property allows for the windows around the sculptural freestanding bathtub in the master ensuite. The dramatic Harco Loor light fixture adds a modern, edgy element but has an organic feel that works well in the space. 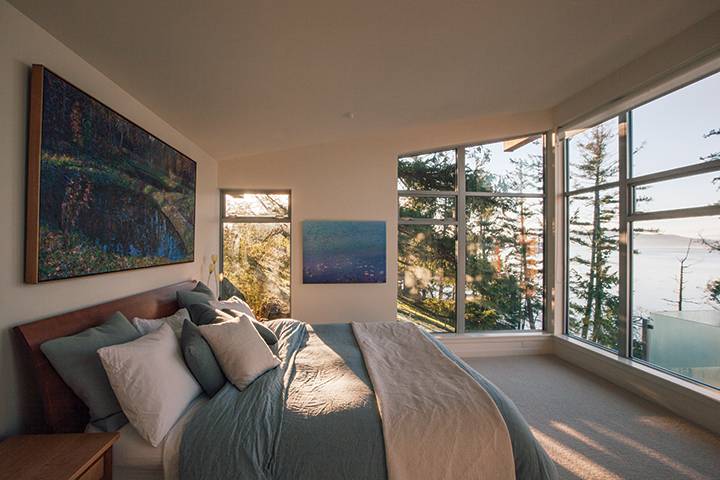 The serene colour palette of the bedroom invites relaxing and doesn’t compete with the views. Nature-inspired art — such as the Brent McIntosh painting above the bed and the Steven Friedman photograph between the windows — can be found throughout the home and contribute to its West Coast esthetic.