Through years of much-loved revelry and pageantry that goes along with Victoria Pride, a vital message endures: people have the right to live their authentic lives. 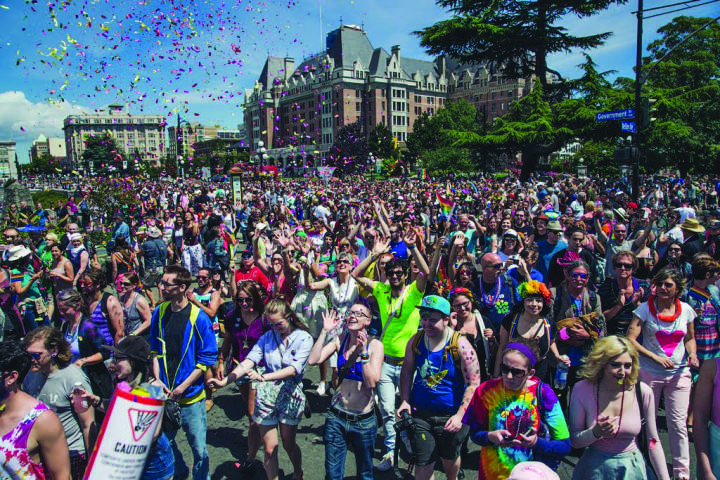 In recent times, the LGBTQ2 community and their allies march in the Victoria Pride Parade, the city’s biggest parade of the year. Photograph by Peter B. Jakab.

What began as a modest march down Government Street in 1993 by a couple of hundred supporters has ballooned into one of Victoria’s major events.

This year’s Pride Parade, the 25th, will likely see as many as last year’s 120 entries, with thousands lining the route through downtown. Thousands more gathered at MacDonald Park in James Bay for a celebration of LGBTQ2 culture, music, food, libations and one of the more intoxicating parties thrown in this town.

But a story lost amidst the revelry, pageantry and strengthening of community that has come to define Pride Week and its myriad events — from the Big Gay Dog Walk, to Pride in the Word, to the Memorial Drag Ball game — is that of the pre-Pride parades and picnics.

There were several years of now-famous picnics held in Beacon Hill Park beginning in 1991. According to Colin Craig, one of the handful of gay men who initiated those gatherings, the first was simply a Hibachi, some hot dogs, balloons … and 200 people.

The 61-year-old explains that The Island Gay Society had recently disbanded and there were “six or seven bucks left over” and a feeling that something should be going on; some community event should be taking place where gays and lesbians could meet and mingle outside of the darkened anonymity of a bar.

“We’d never been outside doing anything as a group,” recalls Craig. “This was the first time many of us had seen each other in daylight. Before that we had the Queen’s Head at night. It didn’t open until nine, it had a cabaret license, and we were in a dark place.”

Craig laughs thinking about how those picnics became like a little Pride Parade in reverse.

“The Tally-Ho horse-drawn wagons (full of tourists) would come along and we’d kind of wave at them.”

Michael Halleran, who’s now 74, says the picnics were always trouble free, but there were still members of the queer community with a not-entirely illogical sense of paranoia.

“I remember one gentleman was convinced that the rednecks were going to come out of the bushes and go at us with bicycle chains and tire irons,” he says.

Another was alarmed that pink balloons might be on display and complained, “Oh my god! People might think we’re gay!”

“I felt we weren’t ready to do a parade in Victoria at that time,” says Craig. The gay and lesbian community still operated, if you will, under the radar, and plenty of picnic participants were leery about flaunting their sexual orientation in a procession through downtown. 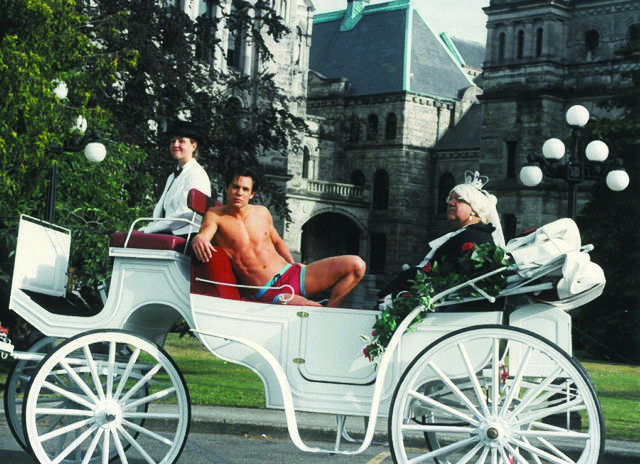 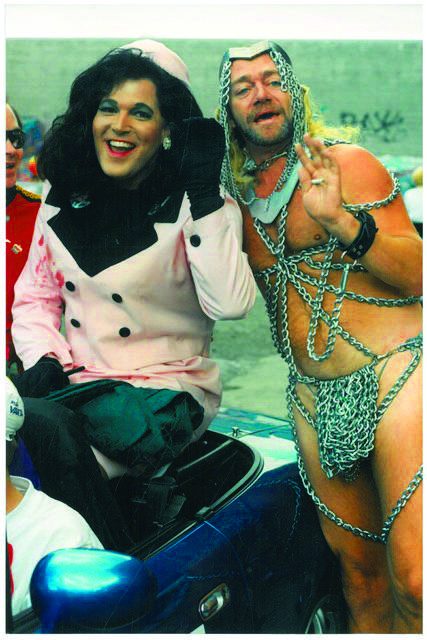 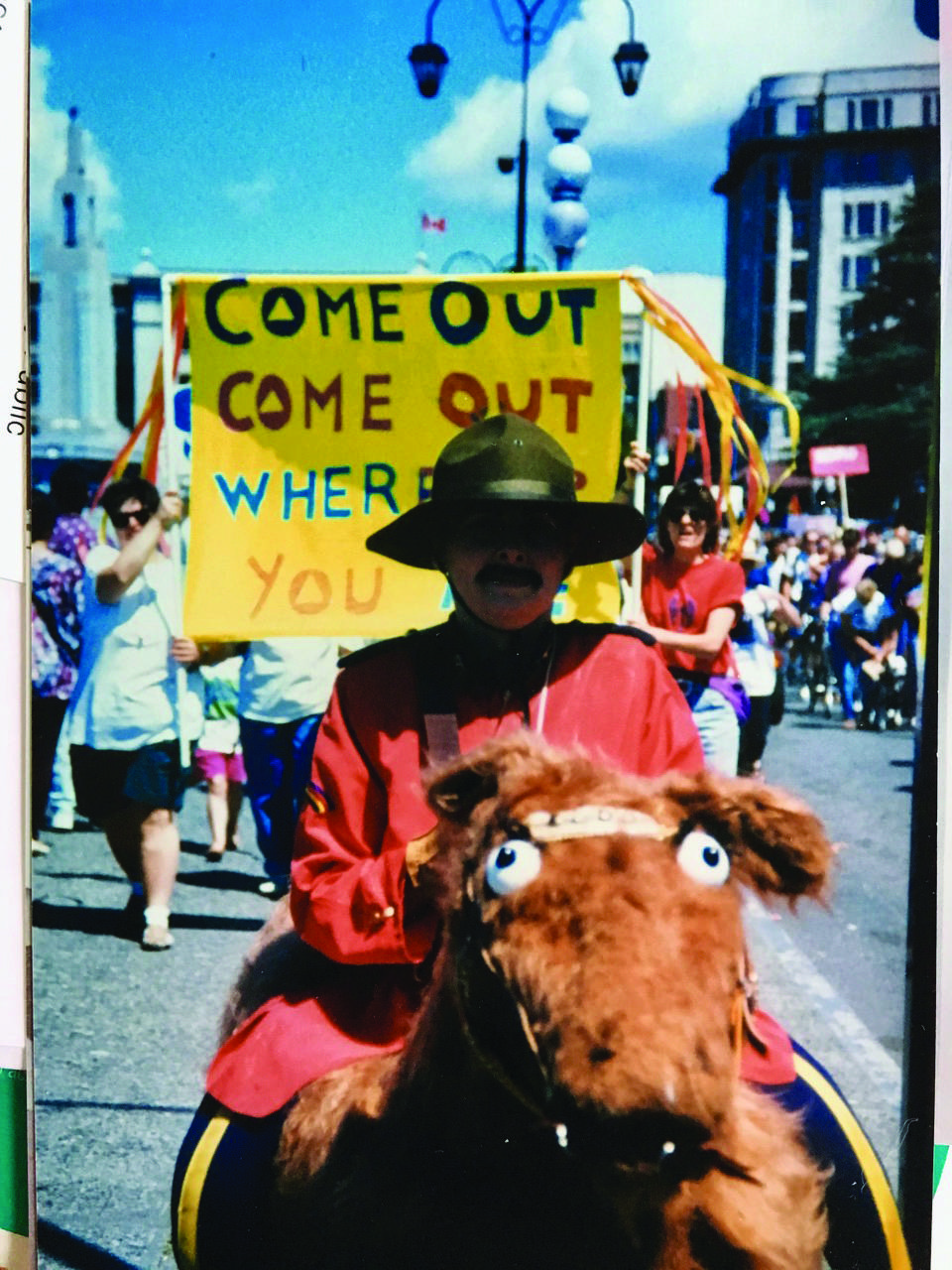 The Gay Pride Parade, as it was called originally, grew out of a picnic in Beacon Hill Park. One year, Joe Carson led the parade as Queen Victoria; Judy Bell, dressed as a Mountie, led the parade in another year.

The picnics continued to be family-friendly, low-key affairs with games like tug-of-war. Within a couple of years they were attracting more than 600 people, and the donation jar, originally set out to pay for the hot dogs, was filling up.

As soon as there was a profit in the till, the (Victoria) Pride Society was organized, remembers Halleran, one of those who helped put it together. And the formation of the society meant there was finally a presenter for a parade.

But hold on a sec. There had already been Pride parades in Victoria, begun by a group of lesbians in 1989.

Barbara McLauchlin, who had been editor/publisher of LesbiaNews (a magazine that later became the Lavender Rhinoceros), was tasked to contact City Hall and obtain a permit for a parade.

“I said OK because I usually said OK to everything and I found the scariest thing to do was to phone the City for the license. I was petrified. I mean, nothing was really good yet. It wasn’t legal, although I was fairly OK about being ‘out.’ Anyway, I picked up the phone and dialed and got this woman whose response was, ‘At last, Victoria’s going to have a Pride Parade!’ and all my sweat dried up.”

But it came with a caveat. Participants would have to stick to the sidewalk because police would be unavailable to close the streets due to a large Christian parade group marching at the same time along Dallas Road.

“Quite a few people cheered. Quite a few people told us to get lost, but none of us felt afraid even though there were no police,” recollects the 75-year-old. “The drag queens made it. They put on an absolute show.”

Kevin Doyle, who photographed those early parades, was surprised how many shopkeepers lined the street.

“I remember Jim Munro with his scarf was out there. I couldn’t believe how many of them were clapping.”

There’s a story of Times Colonist gossip columnist Jim Gibson reporting that a group of bystanders on the lawn of the Empress responded to the paraders’ chant of “We’re here. We’re queer,” with “We’re square. You’re there. We don’t care.”

McLauchlin’s ambitious collective repeated the parade the following summer although it became a more in-your-face event led by, as McLauchlin explains, “bare-breasted dykes.”

“I was so embarrassed. I don’t necessarily think the Pride Parade should overwhelm the straight community.”

David Tillson, in his 14th year as president of the Victoria Pride Society, has watched the parade grow into the behemoth it is, just as the gay and lesbian community has expanded to encompass a diversity of identities, not all of them wanting to be recognized the same way.

It’s becoming quite political, he says.

“Last year UVic Pride boycotted the parade because we don’t represent First Nations or homeless people or people who are neurotypical. They had a whole list of things. This year they don’t want the police in the parade.”

Tillson’s group has grown the parade by 10 or 20 entries a year over the last 10 years without, he says, consciously excluding anyone.

“It takes courage to participate in a parade. Our community has so many different sub-genres, but we all have the same goals. We want to live our authentic lives and not be discriminated against or have violence committed against us. My theme for this year is there has to be room for everybody. If we’re all going to be part of the same community, we all have to be able to gather.”

Gather they will. The Pride Parade starts at Centennial Square, July 8 at 11 a.m., heads down Government Street past the Legislature, then winds through James Bay to MacDonald Park.