At Crust Bakery, chef Tom Moore makes pans of Marshmallow S’mores to cut into squares and brulée with a torch for a simple dessert. 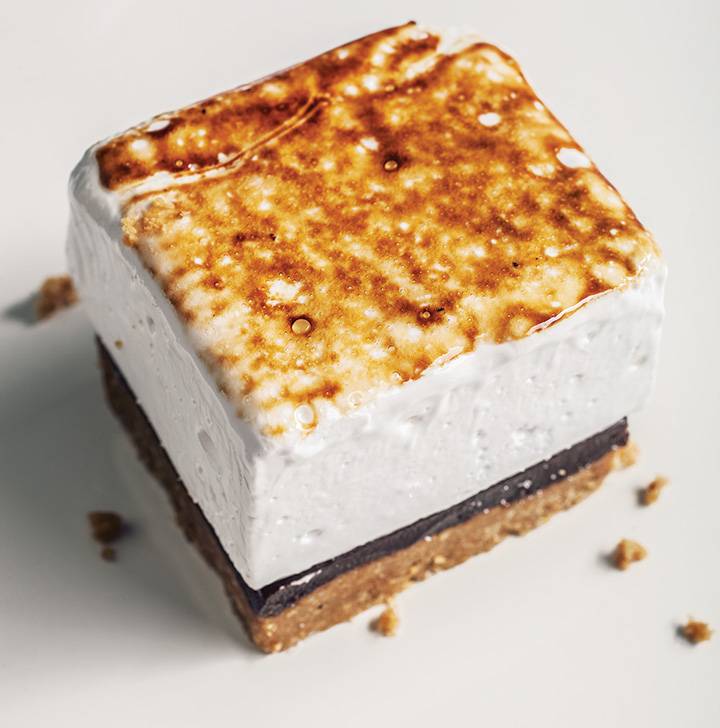 • 5 sheets gelatin (we use silver grade)

Start by spraying a bottomless terrine mould or springform pan with a removable base with canola spray. Place the mould on a flat tray lined with parchment paper or on a silicon mat.

Combine the base ingredients and spread them into the mould. Press down gently and evenly. Refrigerate.

For the ganache: Place the chopped chocolate in a bowl, bring the cream to a boil, and pour over the chocolate. Stir with a wooden spoon until smooth. Let the ganache cool to room temperature, then stir in the crushed peppermint candy canes.

Pour ganache over the crumb crust in the mould and spread evenly. Refrigerate.

For the marshmallow layer: In a shallow bowl, combine gelatin and 1/2 cup of cold water and soak for 5 to 10 minutes.

Combine all other ingredients in a saucepan. Bring to a boil, and simmer for 3 minutes. Add gelatin and extra soaking water and boil for a further 2 minutes — or until it rises.

Remove from heat, transfer to an electric mixer and whip with a whisk attachment on high until the mixture has cooled to room temperature and is light and fluffy.

Use immediately, spreading the marshmallow over the chilled ganache in the mould. Smooth top with an oiled offset spatula.

Remove the mould. Cut the s’mores into 12 squares using a hot, wet knife.

With a small torch, brûlée the top of each square until lightly browned before serving.