When a weekend getaway outside of Victoria calls, Sooke is close enough to be convenient, but far enough to let you take a deep breath and enjoy an exceptional culinary culture and some sea and forest therapy.

On the southwestern tip of Vancouver Island, a rare town huddles on a cold harbour overlooking Washington State’s Olympic Mountains. Sooke — half wild, still civilized, has long been on the Canadian foodie map thanks to a pioneering destination restaurant and inn, Sooke Harbour House, which has been serving foraged fare — berries, fungi and seaweeds — for years.

But Sooke is now more than its signature inn. Broadly speaking, the region runs from Port Renfrew to Metchosin, incorporating wild beaches, waves for surfers, quiet forests and enough foodie action to keep even the most vigorous of hikers sated.

So let’s imagine you need to work up an appetite. Where to start?

Working Up an Appetite In and Around Sooke

East Sooke Park is one of the most stunning parks in the region, featuring lush old-growth valleys and a spectacular 10k oceanside trail along an arid ridge. Parking is easy (BC Transit serves the park as well) and there are trails for every level.

If you didn’t bring a picnic to the park, Sinclair Philip, founder and co-owner of Sooke Harbour House, recommends stopping in to the Smokin Tuna Cafe on the waterfront in Becher Bay, a short drive away. 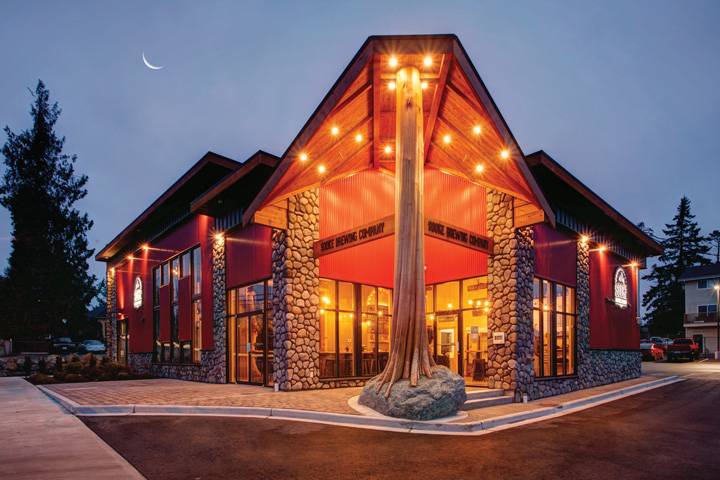 Drop by to fill your growler or stay for a pint or a flight of coastal brew at Sooke Brewing Company.

And if you worked up a thirst on your hike, not to worry: Sooke is now home to three microbreweries. They are, in driving order from Victoria to Sooke, Sooke Oceanside Brewery, Sooke Brewing and Bag Dog Brewing. Try the Belgian Blonde at Sooke Brewing before checking out newbie Bad Dog’s citrusy Tire Biter IPA.

Past Sooke proper (which we’ll get back to) but right around the corner from Bad Dog is the local salt company, Saltwest Naturals. Featuring hand-harvested Canadian sea salt, the company offers tours of its innovative solar-powered facility, which is open from March to December. 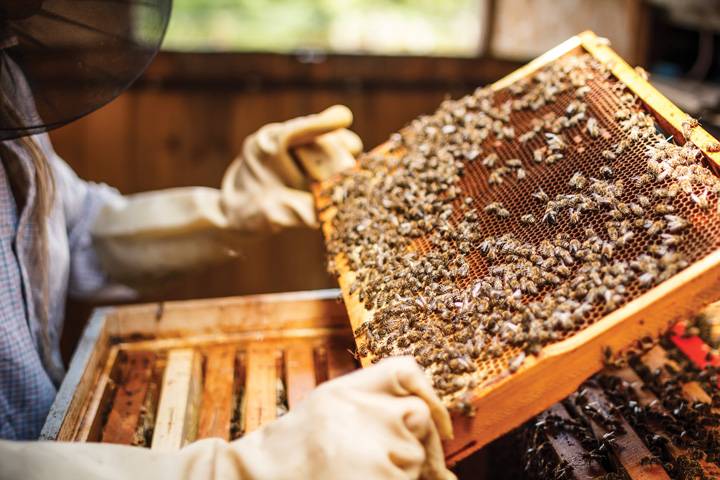 Take a guided or self-guided tour of Tugwell Creek Honey Farm & Meadery. Visit the farm’s bee colony (behind glass) and learn about the secret life of bees. Tour the meadery to find out how honey is turned into Tugwell’s award-winning meads.

About 10 minutes away down Otter Point Road from Saltwest and Bad Dog is British Columbia’s first meadery, Tugwell Creek Honey Farm & Meadery. Run by entomologist Bob Liptrot and his partner Dana Le Comte, Tugwell Creek was founded in 2003 and has been producing award-winning wines and meads (made from fermented honey) since then. With a tasting room and tours on offer, plus beekeeping lessons and a deep knowledge of apiculture, Tugwell is not to be missed. 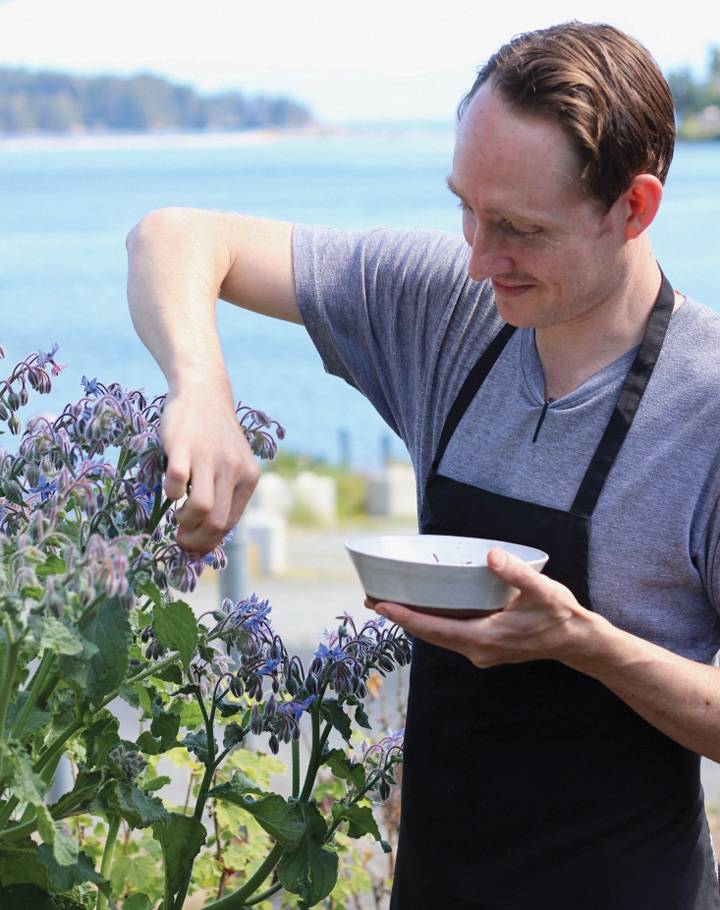 Titillation accomplished; where is there to sit and eat?

Years ago, between the local octopus and pinot gris at Sooke Harbour House, a young chef and a wine manager fell in love. Their culinary creation? Wild Mountain. Their motto: Clean, fresh and fair.

Chef Oliver Kienast stresses that he doesn’t use local “just when it’s easy.” He ferments, pickles, smokes, freezes, cans and cures. He processes the local bounty for our drizzly months.

“If a farmer or fisherman has too much of something, I tell them to bring it by,” he says. “I can almost always put it to use.”

Kienast has two small gardens outside the restaurant. When I visited in early summer, the menu was fresh forward: a chilled pea soup with Dungeness crab, raw oysters with elderflower vinegar, an innovative green salad with pickled rhubarb dressed in a fig leaf and maple vinaigrette, and local steak with garlic scape and grand fir butter.

Brooke Fader, Kienast’s wife and co-owner of the restaurant, acts as sommelier and manages front-of-house operations. Fader is the convivium leader for the Southern Vancouver Island Slow Food group and founding member of Slow Fish Canada, which is fitting because their restaurant overlooks the docks where halibut and salmon roll in from the Juan de Fuca Strait.

But Kienast avoids those signature fish. “There’s so much waste in fishing, so I use by-catch — octopus, rockfish, herring.” 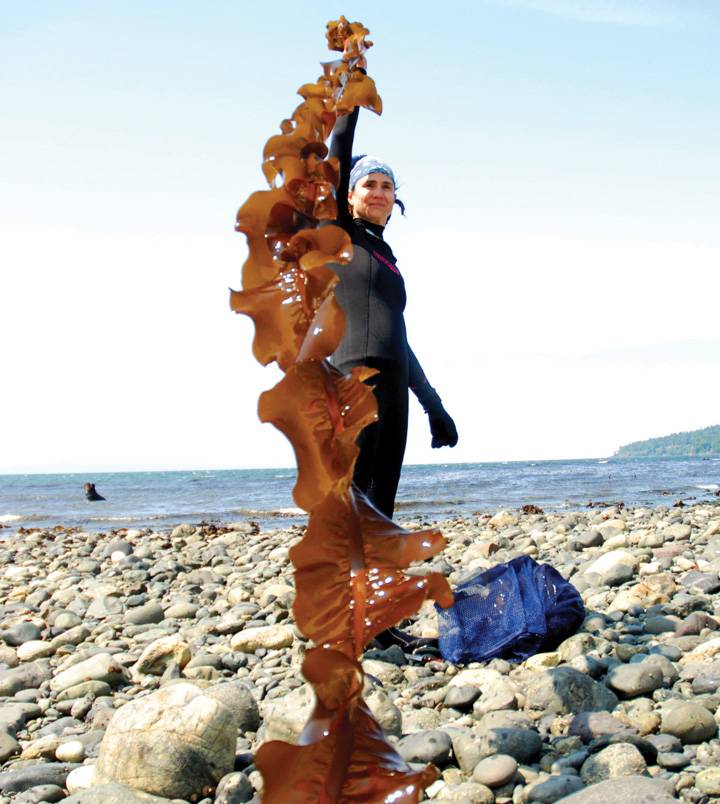 Amanda Swinimer, owner of Dakini Tidal Wilds. Did you know that seaweed is known to be more nutrient dense than most land vegetables?

Speaking of salty, Kienast buys his sea vegetables from local forager Amanda Swinimer of Dakini Tidal Wilds. If you want to immerse yourself in marine ecology, take a tour with Dakini, which has full wetsuits, fins and snorkels for a one-of-a-kind BC experience — a Kelp Forest Tour. These leave from French Beach in season and require some comfort with snorkelling. The experience is literally immersive, but Swinimer offers commentary on land before you set out and accompanies groups into the “forest.” For people looking for more detailed information about local sea vegetables and their uses in everything from cosmetics to industry, Dakini also offers land-based eco-experiences on beaches closer to town.

Dakini’s hand-harvested kelp also finds its way into two local beverages, a Sooke-made Akvavit and a Seaside Gin. You can try a sample in Sheringham Distillery’s tasting room.

From a natural perspective, the southwest coast of Vancouver Island is a marvel. Architecturally, perhaps not, but the Sooke Harbour House might change your mind.

Long the repository of innovative art, including diverse works by over 150 local artists, this charming oceanfront inn has recently been renovated and now includes a cozy pub in addition to the art gallery and award-winning restaurant. You’re welcome to pop in to view the collection, browse the shop and gardens, and take in the views. Be warned: you may not want to leave!

A little known but very respectable oceanfront inn with a variety of room choices and cabins near the community of Shirley (just past Sooke) is Craidelonna. Outdoor amenities include a hot tub/sauna and shower for guests. Craidelonna also does meals by request, offering a lodge atmosphere, and will happily host retreats and small weddings. Word has it that the sunsets here, steps from the ocean’s edge, are spectacular.

In Shirley you’ll find a sweet coffee shop, bakery and cafe cutely named Shirley Delicious. Popular with day trippers heading out to surf or hike at Sombrio Beach, this place gets great reviews, but plan to line up at breakfast time.

Also in the neighbourhood for people heading back from a day in the waves, is the seasonal restaurant Stoked Wood Fired Pizzeria and Market. Closed in winter, this new venture is serving the growing number of adventurers and residents. (The population of Sooke proper has grown over 13 per cent in the past five years).

Farther up the coast, between French Beach and Jordan River, is the landmark Point No Point Resort, which has been in operation since 1952. With twenty-five cabins, a restaurant and rooms in the lodge, the resort offers explorers the northern beaches and a true West Coast feel and menu.

Stop at Jordan River to watch the surfers or carry on up the coast to Port Renfrew where more outdoor adventure awaits; the Wild Renfrew website is a great portal to discovering accommodation options, kayak tours, wilderness trips and recs for restaurants, including the ever-popular Coastal Kitchen Cafe.

The drive back to Victoria from Port Renfrew is about two hours, so in order to get your game on for your return back to the city, stop in at Stick in the Mud in downtown Sooke. A roastery and coffee shop, it’s guaranteed to buzz you up for the drive back lest you’ve been lulled by the waves.

While not quite a secret, these naturally formed pools of aqua-green water along a stretch of the Sooke River are still a bit obscure. Picnic amid artful rock formations then cool off in pristine pools and waterfalls.

Love kayaking? Take it up a notch and experience surf kayaking in the wild-coast waves near Jordan River. Sooke’s Rush Adventures offers beginner to surf-ready lessons.