From the coastal cool of the shopkeepers of Beachology to the urbanism of the salon owners at DesignHouse, these four dynamic duos make Victoria a little more hip — and by sharing their passions, allow us all to bring some flair into our own lives. 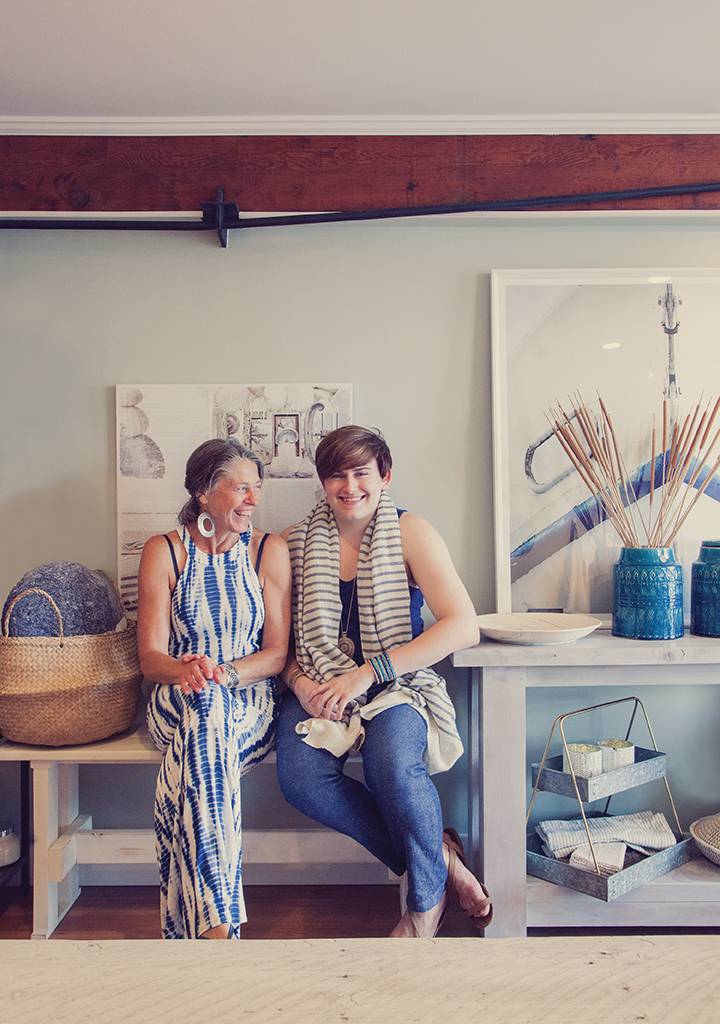 Kim Robertson (left) and Noah Robertson look to fuse a boho vibe with a modern sensibility at their boutique Beachology, located in the village of Cowichan Bay.

TWO IF BY SEA
Tucked down on the waterfront of the village of Cowichan Bay, the idyllic store Beachology entices passersby with its inviting coastal charm. Cushions and throws in sea-inspired tones beckon from the porch, and inside, its restful ambience has inspired more than one visitor to engage owner Kim Robertson to work her magic.

The store, previously known as Kim’s Beach Interiors, is run by Kim and her son Noah. While Kim, a trained colour specialist, focuses on the décor side, Noah helps source the clothing, a draw for regulars who come from as far away as Vancouver and Calgary.

“That’s why we recently changed our name to Beachology,” Kim explains. “It was scary, as we felt like we had just established ourselves, but we were losing people who were walking by thinking we were just home décor.” The new name is a play off of the name Anthropologie, a brand Kim loves.

“The combination of the two has just been amazing,” she says. “I call it homeware you wear. Your home should display who you are, as should how you dress. And they usually go hand in hand. It should be a whole feeling you create.”

For Beachology, Kim wanted to create a feeling of “barefoot luxe,” both with the décor and fashion. She says it’s all about being comfortable in your own skin and using items and design concepts that can be dressed up or dressed down. The focus is on natural fabrics and textures and a soothing ocean palette. Another requirement? If it goes with a pair of jeans, it comes into the store. Both Kim and Noah have seen customers discover a new sense of style while browsing the racks at Beachology.

“Between the two of us, we’re able to help them feel a new confidence and see a new breezy image of themselves,” Noah says. “Some people walk in and they are a little hesitant to try on the breezy vacation look, but you can tell they want to. I always encourage them to try it on, and I always give an honest opinion, which people appreciate. I’ve had ladies tell me, ‘I like you; you’re not one of those typical salespeople.’” 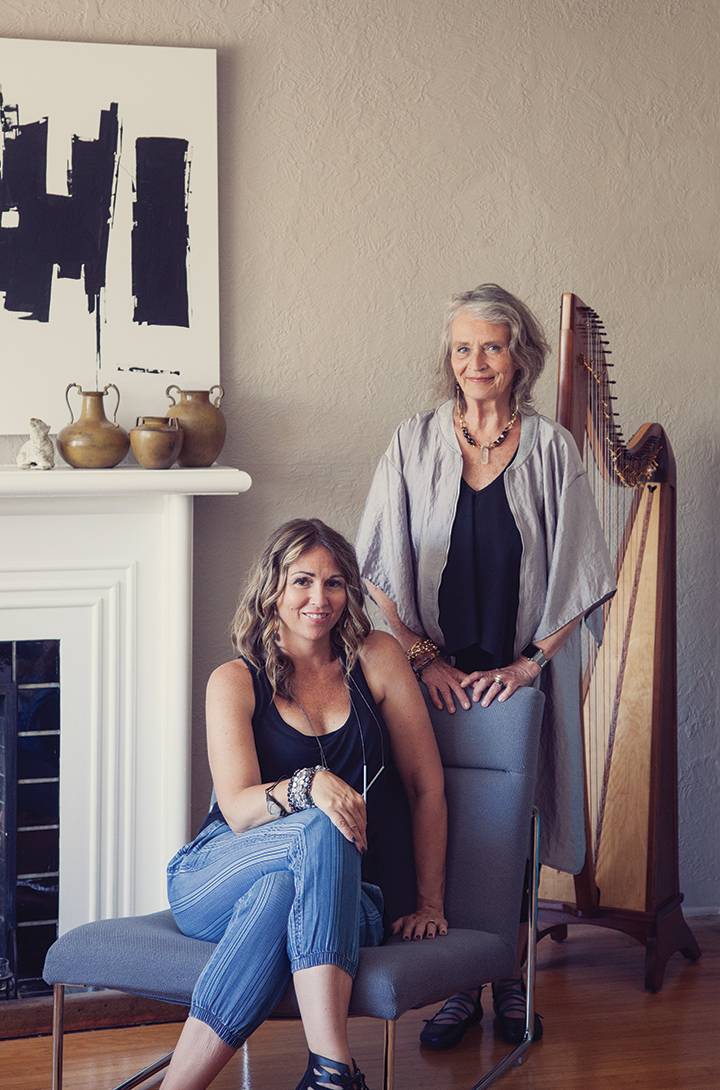 BRIGHT THINGS
“Not in, not out, but timeless,” says Deanna Young, explaining the name of NINO Designs, her collaboration with artist and jewelry designer Karin Holdegaard.

Hammered metal earrings, knitted fine-chain bracelets, elegant lariats and statement necklaces of clustered chain and gemstones all feature in this unique jewelry line.
While the two women have only been working together for just over a year, they first met in 2005. Young — an admired event planner most recently lauded for this summer’s Bites, Brews and Bands at Ogden Point — was then co-owner of Art & Grace, a clothing store in Victoria, when she was diagnosed with breast cancer and had to take a break from the business.

“Karin stepped in and helped my partner out,” Young says. “That’s how we met. She jumped to my aid.”

Holdegaard was herself diagnosed with an osteosarcoma in her leg in 2009 and, although she recovered, has since found it difficult to get around and work outside of the house. That led her back to designing jewelry, something she did a lot of in the 1980s, when Nordstrom carried her designs.

Holdegaard, who is also an abstract artist, draws inspiration for her jewelry designs from a multitude of sources, even the combinations in the colours of the food on her plate.
“I’ll see two colours in a tree, or jewelry on someone, or fashions in a magazine or on television,” she says. “Inspiration is everywhere.”

When Young was sourcing from her friends for a charity auction, she discovered the amount of finished product that Holdegaard had sitting around her house. So Young suggested the two collaborate, pairing her marketing know-how and her previous jewelry-design experience with Holdegaard’s abundant creative output.

“We inspire and feed off each other,” Young says in describing the joint design sessions at Holdegaard’s arty home studio. “We’ve discovered that what works best for us are pop-up shops and hosting parties at women’s houses. It’s great for Karin, because she can be there to speak to the designs.”

And how do they know they have a product that catches the eye? “It’s not uncommon for people to buy the stuff right off me if I’m wearing it when I go out,” Holdegaard says with a laugh. 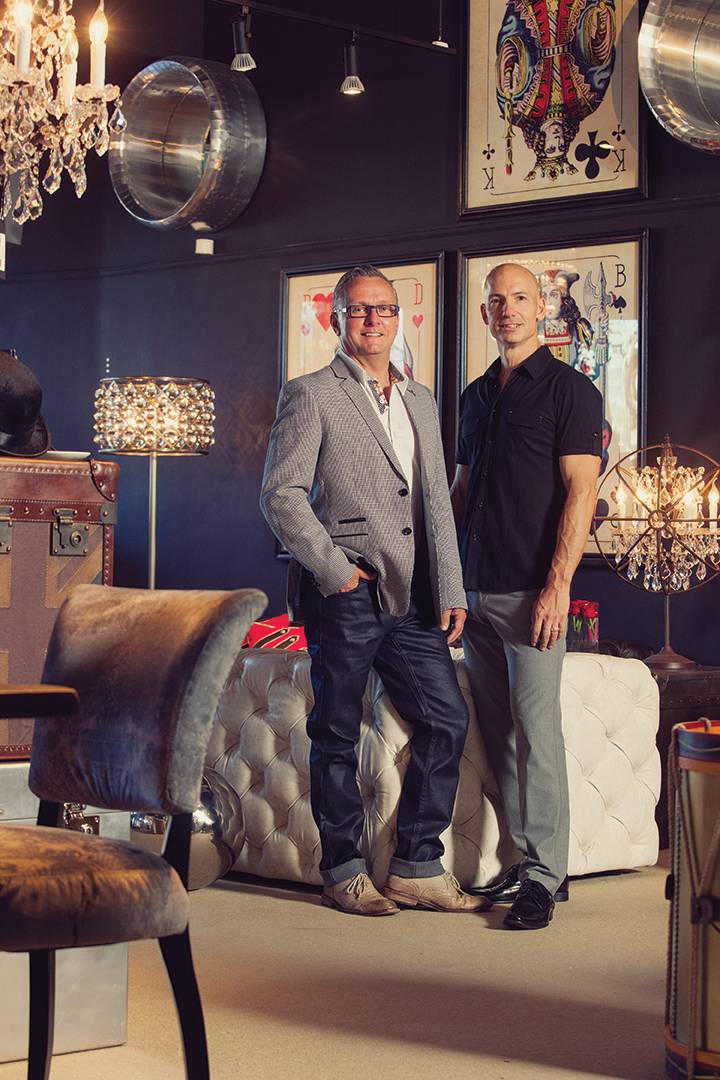 PURVEYORS OF COOL
There is much to enchant in the Timothy Oulton Gallery at Luxe Home Interiors. Extravagant crystal chandeliers are paired with edgy leather sofas and cheeky oversized framed playing cards, all set against matte black walls and shiny aluminum shelving. It’s a look Luxe co-owner Darren Ausmus describes as masculine and industrial, saying the line has found many fans in Victoria.

Ausmus and Scott Elias — his partner both in business and life — first discovered the Oulton line at High Point Market in North Carolina, just one of the many furniture shows around the world the duo has travelled to looking for original finds to bring back to Victoria.

“It’s interesting to go on our buying trips to see who’s putting out the ideas of what might be next,” Ausmus says. “What trend is going to follow the industrial look we’re seeing now? Sometimes things are too out there for Victoria, but it’s nice to push the excitement around design and possibility.”

Ausmus and Elias took over Luxe in 2010, after working in public education. While the career change might seem contradictory, Elias believes their role at Luxe blends several aspects of their former lives. When they were teachers in Vancouver, working in special education, they also flipped homes.

“Making a difference was important to us,” Elias says. “Fixing up homes and making them look nice was the fun part. When Luxe came along it had the potential to blend the two, especially because we can really focus on community involvement.”

The pair considers the space more of a design and inspiration space than a simple furniture store. And they want to push Victoria’s boundaries when it comes to design.  “You do have to make sense of the fashions,” Elias says. “What works in Texas isn’t necessarily going to work in Victoria.”

And despite its reputation as a colonial outpost, they believe Victoria is a cosmopolitan city hungry for design from around the world.

“It’s nice to be challenged by our customers who are coming in expecting and wanting to see what is new,” Ausmus says. “We’ll have clients who have already furnished their homes but who come in for a cup of tea just to see what’s new.” 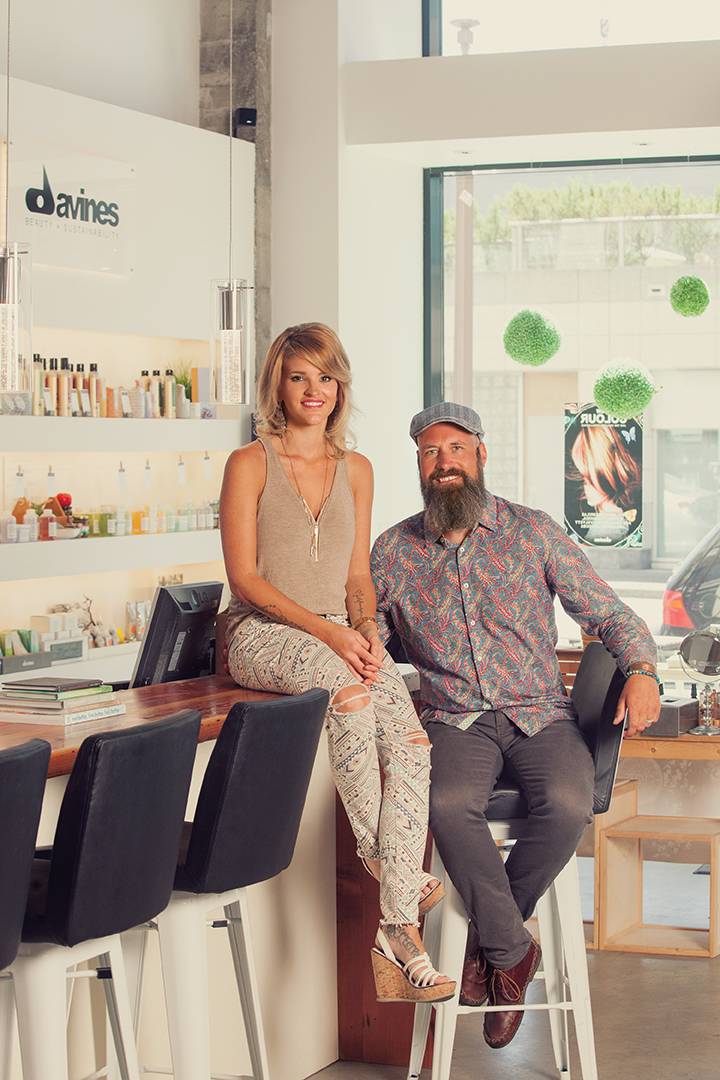 Chantelle Pasychny and Kurtis Brown on the Davines colour bar at designHouse Salon in the Hudson building.

THE URBANITES
At designHouse Salon in the historic Hudson building, a vibrant living wall dominates one end of the industrial-inspired space. Conceived by co-owners and couple Chantelle Pasychny and Kurtis Brown, it makes a fitting emblem for their fully sustainable and holistic beauty salon.

“So many people walk in to the salon and talk about the energy,” Pasychny says. “They say it’s their happy place. That’s special because the salon industry can be intimidating and loud and busy.”

As part of their commitment to sustainability, designHouse uses the product line Davines, whose motto is “Sustainable Beauty” and whose mission is “to be the most sustainable eco-friendly product on the planet.” Even its packaging is reusable and food-grade safe.
“There weren’t a lot of brands that fully encompassed environmental sustainability and didn’t just use it for greenwashing,” Pasychny says. “We were the first Davines salon on the Island. To start one where none of the staff or clients knew the line was a very big risk, but it helped knowing it was completely in line with our values. People recognize that we are being true and honest to who we are.”

Brown and Pasychny were also one of the first businesses in the Hudson district and have seen it evolve from a quiet block, with practically no one walking by their storefront, to a bustling, happening neighbourhood with its own vibe. Brown is especially passionate about connecting with nearby businesses and advocating for the downtown. A recent collaboration saw the salon, along with like-minded businesses, host a fashion-show fundraiser for the Food Eco District (FED) at the Robert Bateman Centre, as part of Davines Sustainability Month.

“We’re ambassadors for cool local culture,” he says. “That fits into the salon experience in general. People always ask, ‘Where do you shop? Where do you eat? Where do you hang out? We’re downtown in a cool, trendy neighbourhood, and promoting local business is all part of being an engaged member of our community.”

Brown not only talks the talk, he walks the walk. Always a dapper dresser, part of his regular wardrobe is wearing local logoed T-shirts. “My personal ethics carry over to personal style,” he explains. “I get to promote local business doing something cool.”