Neil Osborne of 54-40 is a rock star, but he’s Victoria’s rock star, and that makes all the down-to-earth difference. On the eve of the release of 54-40’s new album, Keep on Walking, YAM chats with Osborne about everything from running for mayor to spandex cycling shorts. 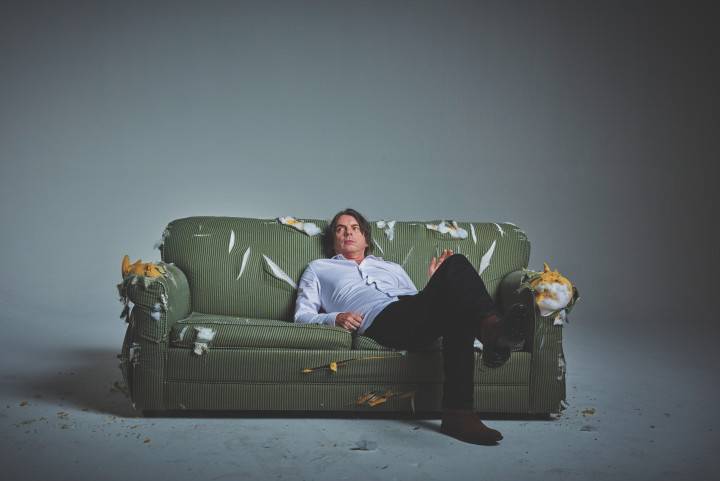 Neil Osborne might be considered the prototypical Victoria guy.

Clichés about yoga, the de rigueur NDP membership and venti chai lattes aside, Osborne is at home in his home of 13 years, as settled-in comfy as he is leading the luminary Canadian rock band 54-40 for the past 38 years, ever since meeting up with bass player Brad Merritt in high school in Tsawwassen.

Home and band fit like stretchy biking shorts (more on that later), or the legendary crunch from that vintage Marshall amp.

Osborne resides in a heritage house, cycles for exercise and likes to wander downtown to check out live music in the pubs — less full-blown rock star and more guy next door in a Canadian Tire commercial.

“That’s my morning. Get up, let the dog out, get my paper, make the coffee and turn on The Current. I sometimes listen to sports too. I like the hockey talk. I’m a Canucks fan and an Oilers fan, unfortunately [laughs]. I’m having a tough time. I’m pretty much Canadian teams first and there’s an order and the Leafs are last. Calgary’s second last. It’s basically enemies of Canucks.”

That from a guy with platinum albums, anthemic sing-along hits, and induction into more than one Hall of Fame.

Everything Osborne wants is in Victoria.

“When I get off the airplane and I walk outside, this ‘thing’ goes off my shoulders and I go, ‘Ahhhh, I’m home,’ and it’s just this relaxing feeling.”

But he shares the concern of many that the town is beginning to lose its charm. Growth, unchecked development, and the replacement of our signature gentleness with a greedy disconnect from what makes this city so livable.

“I get tired of going away for three weeks and coming back and not recognizing what I’m seeing down the street. You know how you go away and let somebody take care of your house? You come back and they’ve decided to rearrange all the furniture and you go, ‘I asked you not to touch anything. Could you please not do that?’”

Osborne could live anywhere, but chose Victoria. One of the feature attractions is leafy, walkable neighbourhoods, where no two houses look the same and the silhouette of downtown doesn’t hide the Sooke Hills.

“You take that away,” he says, “it’s just going to be another blah.” He sees anxiety and tension in neighbours who are frustrated their input into civic affairs isn’t heard.

With the recent release of 54-40’s new studio album, Keep On Walking, the band’s 14th, and a touring schedule that’s pretty hectic for a guy in his mid-50s, Osborne is still on top of his game, musically … and politically.

“I have a very simple platform and I don’t need to have a lot of qualifications because of my platform, which is DO NOTHING. The bureaucracy will run itself. My promise to you is to vote no on everything. No exceptions. No new permits, no rezoning, no nothing. Let’s everybody just take a deep breath for three or four years and by then everybody should know what they want. But my wife’s like, ‘don’t you dare’.”

Osborne’s longtime marriage to Geanine Robey has produced two daughters, Kandle and Coral, who had a short run together in the noir pop trio The Blue Violets. It’s Kandle who has continued to follow her father’s path, finding solo success in Montreal with her debut album In Flames, with a second album coming out this spring.

“I never pushed it on them or trained them or made them take lessons,” says Osborne. “Kandle has a real knack for melody and words, and it’s the only world she knows. She was backstage before she ever had to stand in line to see a concert.”

Celebrated Victoria multi-instrumentalist Daniel Lapp, a big part of 54-40’s 2015 album La Difference, an acoustic re-imagining of their hits and the ongoing unplugged touring of soft-seaters, suggests Osborne’s decidedly un-rock star life has kept his feet on the ground.

“He’s iconic in the Canadian rock world, but just a guy who’s always up for messing around and playing. You never see that look in his eye when he’s asked to do something where he’s thinking, ‘I wonder how this will be perceived.’ He never seems to give a shit about anything like that.”

Lapp says leading a modest lifestyle, having a strong family, and getting involved in community is what keeps guys like Osborne humble and unpretentious.

“He’s always serious about his career, but something I admire is he knows what he does and doesn’t pretend to do anything other than that. [Osborne] isn’t trying to expand into jazz or electronica. He doesn’t care about fads. He’s like Springsteen. He’s like, ‘I’ll just sing my songs. Why I learned that diminished chord, I’ll never understand that,” says Lapp with a grin.

With a catalogue of late 80s and early 90s hits — “I Go Blind,” “Baby Ran,” “Ocean Pearl” — Osborne has earned some time on the couch (between tours and albums and all that armchair ‘mayoring’). He knows he’s fronting a beloved band where no one’s expecting him to be the angry young man behind the mic in the Smilin’ Buddha Cabaret. But asked whether the political/activist/punk edge of music has softened, Osborne is quick to pounce.

“There’s probably more to rail against than there ever was. We think we have all these liberties and this freedom of choice, but it’s all been homogenized. It’s down to Facebook, Amazon, Google and Apple. That’s the new Big Brother. The new threat. And it’s extremely real. I don’t even know how we’re going to deal with that because it’s like we’re all hypnotized. I actually suspended my Facebook account because it’s like hearing other people’s thoughts. I just don’t want to do it anymore. I liked my time before it …

“And then you’ve got the globalization, or what we’ve been referring to in this city — this arrogance, it seems, by mayor, council and developers to do whatever they feel like without really caring what the voters think. So there’s a lot to rail against; it just doesn’t seem like music is the place to put it. Nobody seems to take music seriously like they used to.”

Five (and a half) Questions for Neil Osborne

Is it easier holding a family together than a band?

“Without really thinking about it too much, they’re kind of similar. In both cases it’s a lot to do with trust, getting to know each other and relying on each other.”

How has the way we enjoy music changed?

“Music isn’t as significant to culture as it used to be, although it’s omnipresent. You can’t go into any venue, anywhere, whether you’re buying a chocolate bar or underwear, and not hear music. But that’s what it’s kind of become, a background in many cases.”

Does [54-40 drummer] Matt Johnson ever smile? He always looks so serious in photographs.

[Laughing] I dunno. Believe me, I’ve heard that before. He’s a super-nice guy.

Did anyone ever say you look like Mike Myers?

[Nonchalantly] Oh yeah. This Toronto magazine had a thing called lookalike and they had me and Mike Myers with baseball hats. It was pretty close.

You’re an avid cyclist. Do you ride in full spandex?

“Yeah, I’m one of those guys. Sad to say. I’m not hardcore, though, like some guys.”

So you’re not doping?

“No, and I don’t race. I like to be able to look around when I’m riding, take in the sights.”