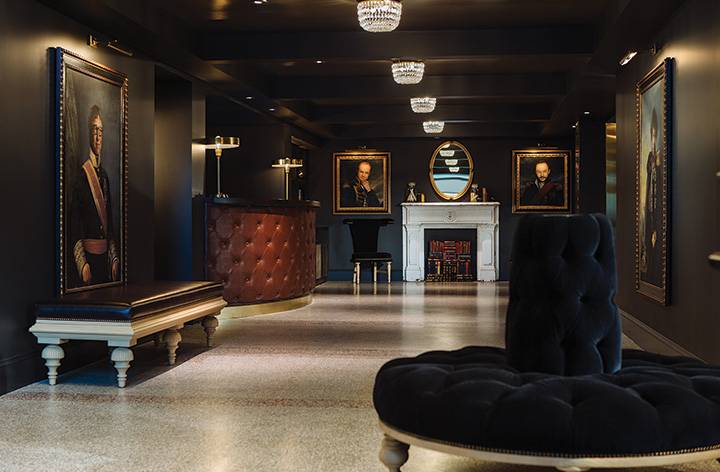 It’s social hour at Seattle’s Kimpton Palladian Hotel, and front-desk manager Andy Spaulding is pouring complimentary Washington State whisky, cider and wine for the clusters of guests chatting in the embrace of the darkly masculine lobby. It’s the perfect urban reception, after the views of Seattle’s cityscape from our approach on the Clipper.

As he tops up our drinks, Spaulding answers my questions about the space’s dramatic paintings which depict Seattle celebrities such as Bill Gates and Jimi Hendrix as Napoleonic heroes.

“Each subject has a close connection to the city. Dave Matthews is the only one we know of who has actually seen his portrait,” Spaulding says with a laugh.  “Apparently, he just nodded at it and smiled.”

The lobby, with leather banquettes, velvet upholstery and brass accents, evokes an upscale speakeasy. It’s entirely appropriate given the building’s basement once served as a Prohibition-era drinking spot. The Palladian — a Seattle landmark listed on the National Register of Historic Places — was built in 1910 and originally operated as the Calhoun Hotel. Its recent transformation from apartments back to a hotel by San Francisco-based designer Nicole Hollis drew on Seattle itself for esthetic inspiration: “From timber to gold to sea trade, the history of Seattle is the story of raw natural elements and invention, nature and cutting-edge technology,” reads the design brief. 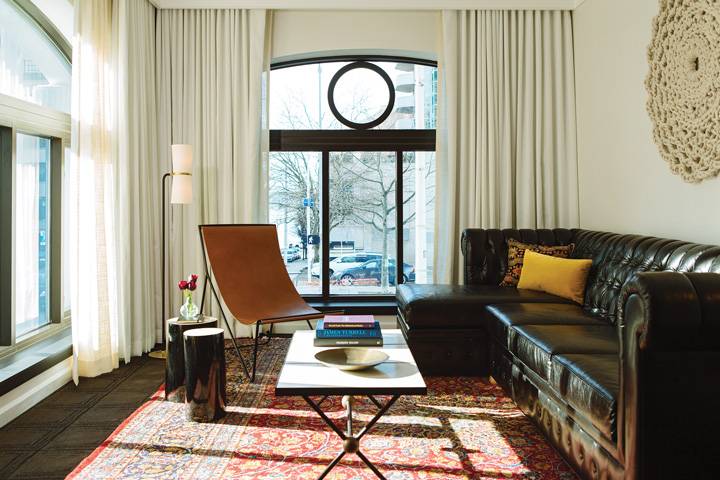 Our room, whose large windows look out at the Space Needle, sparks ideas for décor touches at home — primarily the palette of black and white layered with warm neutrals in brass, leather and textiles. A custom platform bed with a reclaimed-wood headboard is dressed in soft Frette linens. Its throw pillow bearing the stern visage of Michael Clarke Duncan made to look like a portrait of a Napoleonic general — similar to the portraits in the lobby — is a quirky touch. (Various celebrities, including Bill Murray and David Bowie, are depicted on pillows throughout the hotel, and they are so popular the hotel offers them to guests for sale.)

One wall is adorned with a framed vintage city map, while the space above the desk acts as a gallery wall for small, unique Northwest-inspired prints. An antique area rug, a small collection of leather-bound books and an old-fashioned telephone add warmth and complement the historic setting. Favourite elements include the clean lines created by the way the television is set on a wooden artist’s easel and the slim profile of the Sit & Read leather sling chair. 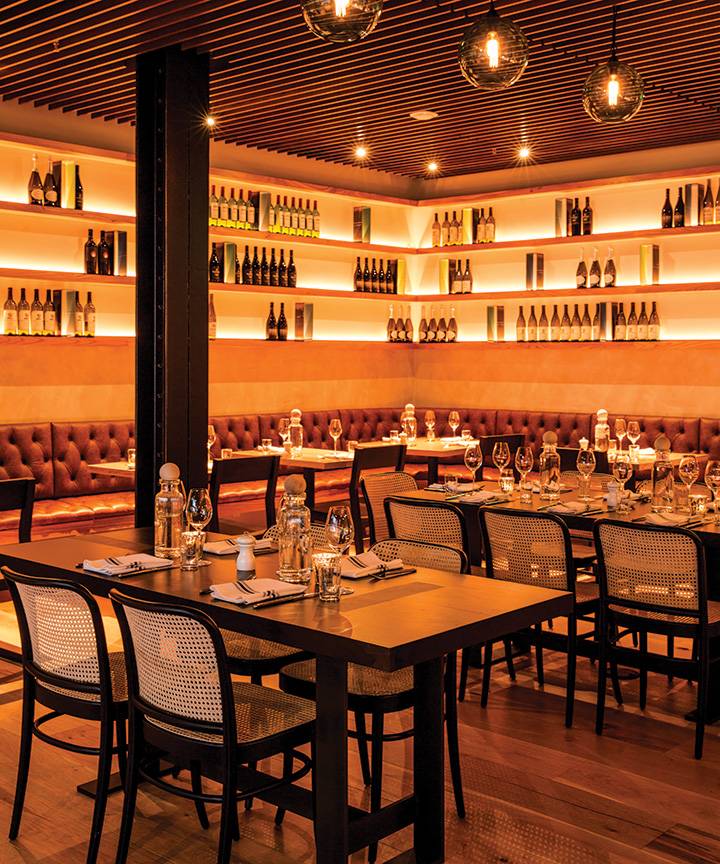 Dinner at Shaker + Spear continues the immersion in urban elegance. The hotel’s restaurant is an intimate retreat of cast glass and weathered wood, designed by Seattle’s Graham Baba Architects. Exposed brick, tufted leather banquettes and smoked-glass pendant lights create a posh ambience — it’s also a prime spot for people watching, both inside and outside on the streets. Of course, the focus is on the food and Executive Chef Carolynn Spence specializes in a unique take on casual comfort food and oceanic fare. From the Scotch Olives (a play on Scotch Eggs) to the dramatically presented whole fried snapper, with its crispy skin and accents of basil and hot pepper, the entire meal is spent savouring the flawless melding of flavours. There’s also no resisting dessert, a warm salted pistachio crumble that leaves us wishing we had room for more.

Before we head for a post-dinner cocktail at Pennyroyal, walking off dinner is a must. As the Palladian is located in the hip Belltown neighbourhood, it’s the ideal location from which to explore the city. Along with the usual suspects, including Pike Place Market and the Seattle Art Museum, the hotel is surrounded by some of the city’s best-hidden gems, such as live music venues, boutiques and cafés.

It’s a heady blend of grittiness, urbanity and elegance, and it’s the ideal stylish escape to get a quick fix on big-city style, bringing together the nostalgic glam of Seattle’s fascinating past and more than hinting at its design-driven future.