For these individuals, finding home meant discovering a unique space, adding lots of character and building a sense of community. 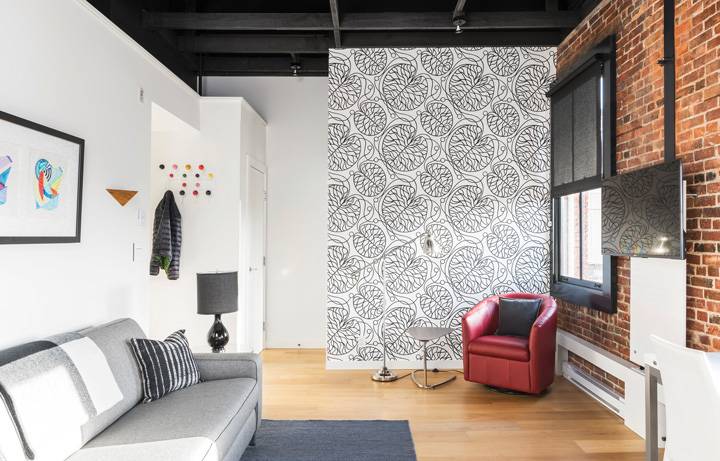 The design-forward sensibility of the unit at the Janion is emphasized by the striking feature wall done in Marimekko Bottna wallpaper. Rydygier chose its oversized organic pattern to complement the space’s monochromatic palette and to harmonize with its other natural elements, including eco-friendly materials and furnishings. One pop of colour is introduced with one of Rydygier’s own paintings, Perspective, hung over the sofa. PHOTO: JODY BECK.

When designer JC Scott first moved into Chinatown in the 1980s it was, as he describes it, “an art ghetto,” lacking many essential services but attractive to artists who could afford the rent in the rustic, heritage spaces. Fast-forward over 30 years and the area is now one of the city’s most coveted neighbourhoods.

“The biggest change is that Chinatown went from being underground, and possibly even so exotic that it was scary for people to be here at night, to a mainstream tourist attraction,” Scott says. “It’s had a 180-degree shift in terms of public perception. It’s one of the most livable, walkable communities in Victoria.”

Scott, whose design and community work have been driving forces behind this shift, has rented various unique studios and live/work spaces in Fan Tan Alley, sharing the last few with his partner, artist Anita Rydygier of West Coast EcoHome. They love their current live/work Chinatown space — which houses JC Scott eco Design and West Coast EcoHome, a shared design and creative studio — both of them “jumped” at the chance to buy a unit in the restored Janion building.

“I believe [the Janion has] got way more character than a new building, with all the features and conveniences — what Anita, being from England, calls mod-cons — of a new building,” Scott says. “And it’s got all the charm of one of Victoria’s landmark buildings.”

As the first buyers in, the pair got their choice of unit, picking the largest west-facing, top-floor unit in the heritage section.

“It has stunning views of the harbour and the parliament buildings,” Rydygier says. “We knew there was going to be no more building to block that off. We just knew it had to be that corner unit.”

“You take what’s already there, the tall ceilings and the black and white, and carry that theme throughout the whole space,” Rydygier says. “When you put old and new together and do it well, it’s got such great personality. The building is unique and not so homogenized as a lot of the buildings that have been built from scratch.”

“We walk up original stairs under an original skylight into a new unit with original exterior walls,” Scott adds. 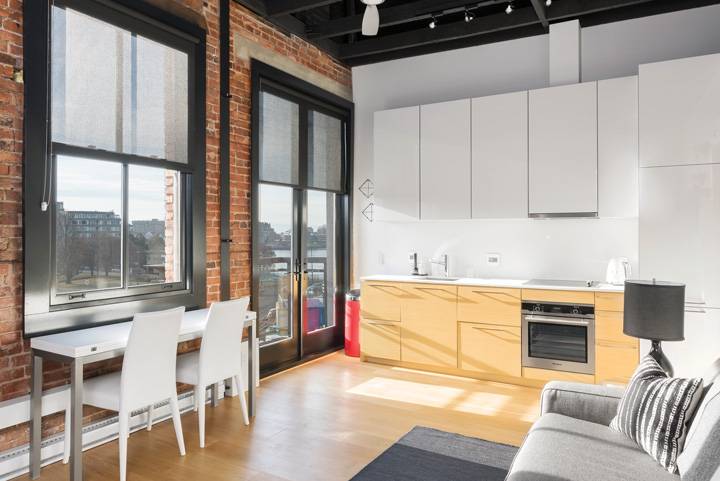 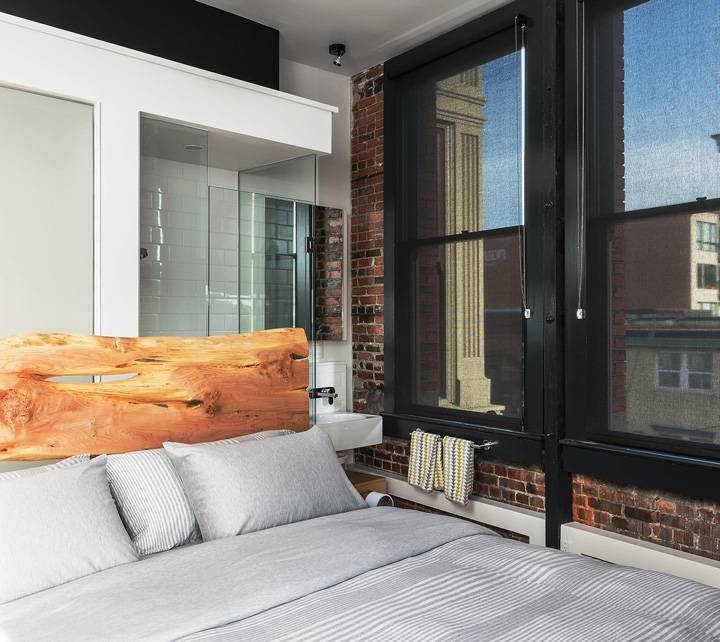 The natural elements continue into the ensuite and bedroom, which is dominated by a stunning Live Edge Design bed with an organic latex mattress, organic sheets and wool blanket. PHOTO: JODY BECK. 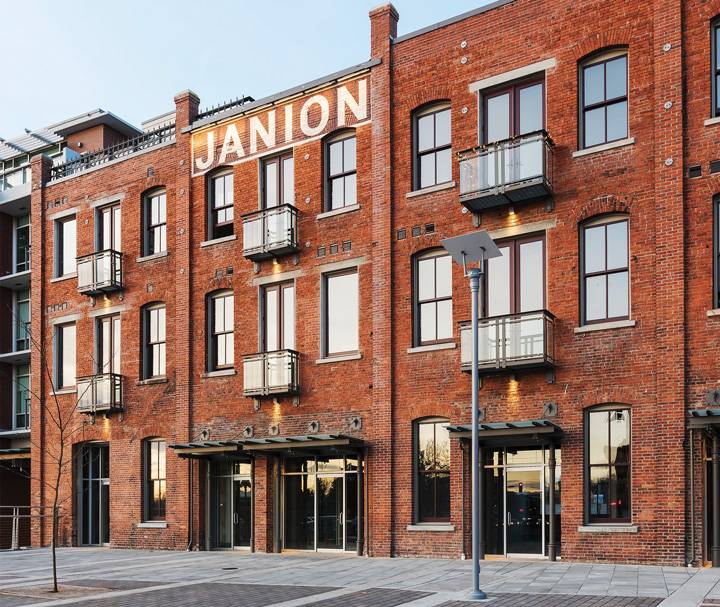 A fully restored brick heritage building connected to a new concrete addition, The Janion is a striking mix of historic and modern. Scott and Rydygier chose a top-floor, west-facing unit for its stunning harbour views. PHOTO: JODY BECK.

Erica Smolders, the proprietor of the floral boutique Rook & Rose, and Jordan Stout, an account manager at the creative agency The Number, are also Chinatown residents drawn to the one-of-a-kind spaces and lifestyle of urban loft living. The two moved into their space on Fisgard around six years ago and Smolders knew from the moment she walked through the front door that it wasn’t a typical apartment. Its narrow entry staircase opens up to an expansive room with high ceilings and large windows in every corner.

“This building was originally built in 1888, so every heritage detail in this apartment is noteworthy — original brick walls, hardwood floors, skylights and narrow doorways plus a fire escape overlooking Fisgard Street,” Smolders says. “The big front windows face the Don Mee sign and its neon glow fills the apartment in the evening.”

Before moving in, the pair knocked down a couple of walls to remove a main floor bedroom — they sleep in the loft space over the main area — to open up the living space. They kept the funky black-painted wooden floors but painted over the ceiling and navy-blue walls. To update the space, they replaced old kitchen appliances and switched out the existing bathroom fixtures to brass ones.

“[Our décor] is inspired by the places we’ve stayed in Los Angeles, New York and Marfa, Texas,” Smolders explains. “There’s a neutral colour palette throughout the apartment, but we’ve incorporated collected artwork, assorted keepsakes, teak furniture and lots of plants. We like keeping the space bright and open — it’s simple, comfortable and a little eclectic.”

The perfect day in Smolders and Stout’s downtown home involves waking up to the sun coming in the windows, climbing out of their sleeping loft to make a good cup of coffee, listening to vinyl and watering their plants.

“It’s a really nice space to enjoy peace and quiet above a busy city,” Smolders says. 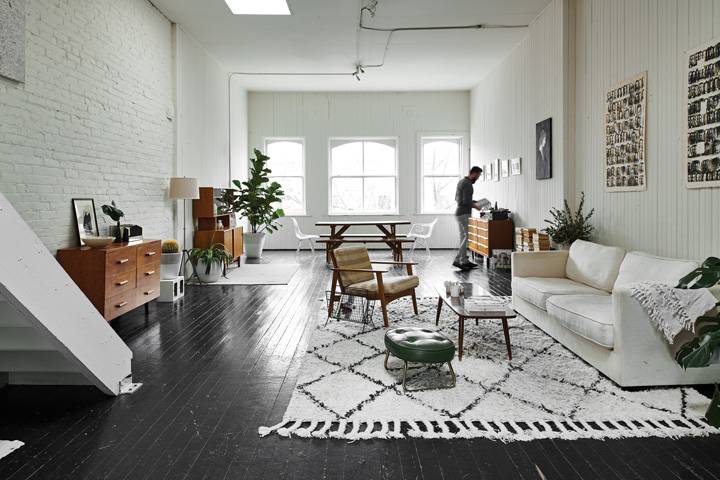 The picnic table in Smolders and Stout’s Chinatown loft has been in Smolders’s family for 50 years. It was originally built for her grandparents for backyard barbecues. PHOTO: JOSHUA LAWRENCE. 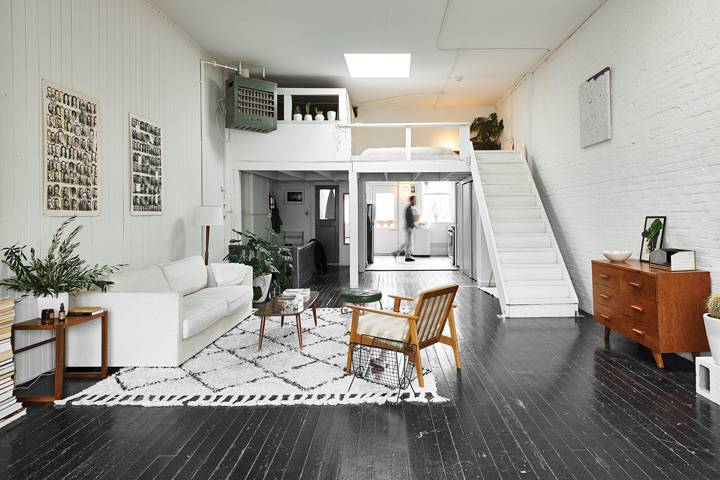 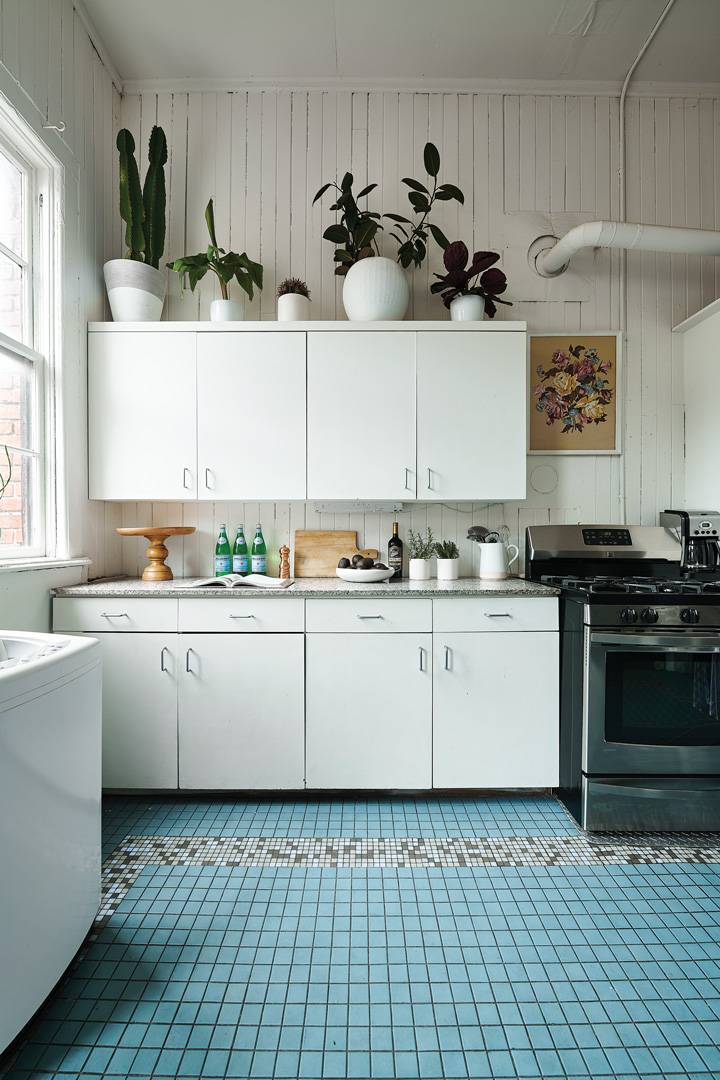 A collection of white concrete and ceramic planters from Rook & Rose displays plants in the kitchen. PHOTO: JOSHUA LAWRENCE.

But loft-style living is not just for individuals or couples. Cristian Arostegui and Hilary Cochrane are raising their young son — with hopes of having another child soon — in a two-bedroom loft in the original Railyards building.

“We were excited when we walked in because it has a different layout and is very modern,” says Cochrane, a speech pathologist with BC Cancer. “It didn’t feel just like a normal condo box. We love it there so much. We’ve looked at bigger places because we’re thinking of having another kid, but now we’re more looking at ways to make this place work for us — thinking how having two kids in there could look. People think you need a house and a yard if you have kids, but you can make this work well.”

The couple moved in over four years ago, before their son was born, and personalizing the space involved painting and adding a large Environite counter, which acts as a bar and focal point during social events. While those get-togethers used to be adult affairs, the guest list now includes many toddlers.

“Our dinner parties used to be really tranquil and now it’s a bit of chaos,” Cochrane says with a laugh. “But it’s so much fun.”

As a furniture designer with his own business, Arostegui Studio, Arostegui builds things as they need them, using the opportunity to create some of his prototypes. And along with his distinctive Sofi and Marea benches, Airy console table, custom dining table and pipe and board bookshelf, their home gets a lot of character from their second-hand finds, including an old school, roll-down map and a mid-century modern sofa from The Fabulous Find.

“We always argue about who found it,” jokes Arostegui, as he explains their eclectic mix of objects. “Our home’s esthetics is a mid-point where we balance my more modern designs and Hilary’s more West Coast style.” 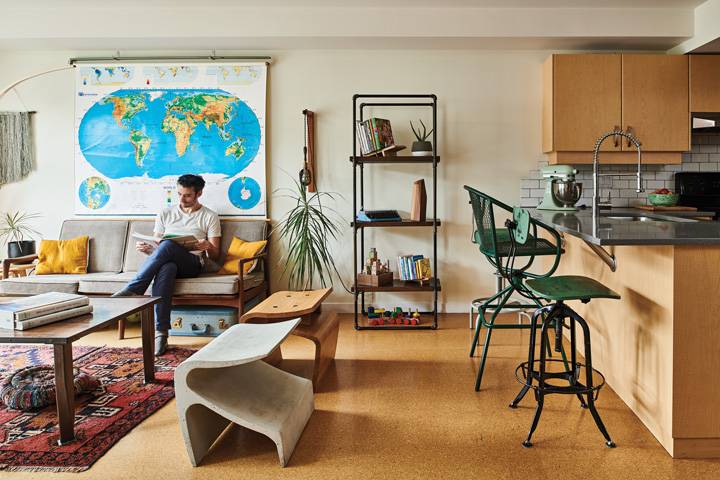 Along with some of Arostegui ’s designs — including the Sofi and Marea benches — the living room features works by fellow members of the Victoria Design Collective, such as the Bow lamp by Mike Randall of Kurva Design and nesting tables by Stéfane Dimopoulos of Atelier Dimopoulos. Arostegui and Cochrane found their industrial bar stools at various second-hand shops, as well as the now-closed Trade Roots. PHOTO: JOSHUA LAWRENCE. 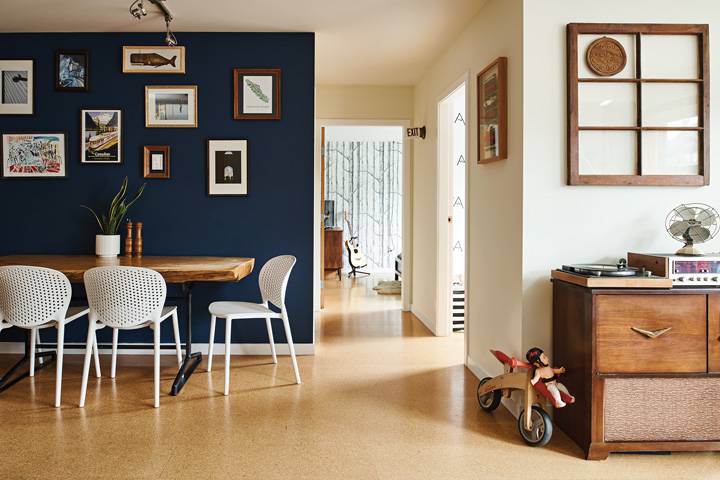 The deep blue was chosen for the accent wall to provide a strong contrast with the white walls. To disguise the thermostat, which sits near the middle of the wall, the pair gave it a small intricate frame and created a gallery, which includes photos Arostegui took while travelling in India. PHOTO: JOSHUA LAWRENCE. 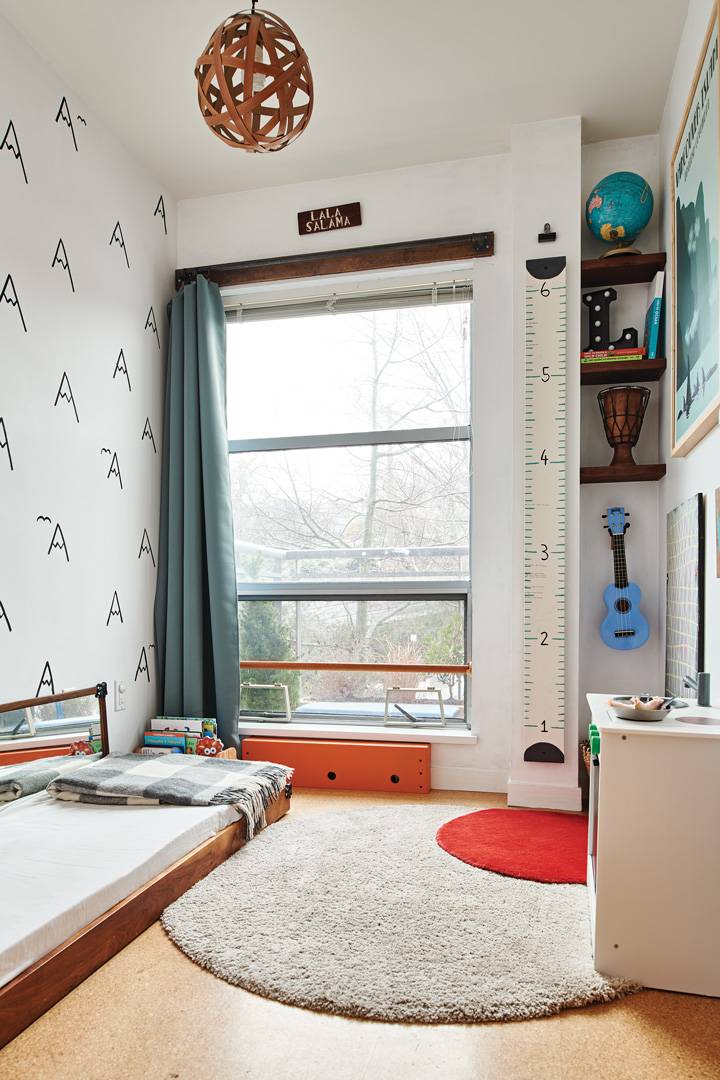 Cochrane decorated their son’s bedroom, creating the mountain-and-bird patterned mural with a chalk paint and designing the unique light fixture, which Arostegui made off-cut of veneer edging. PHOTO: JOSHUA LAWRENCE. 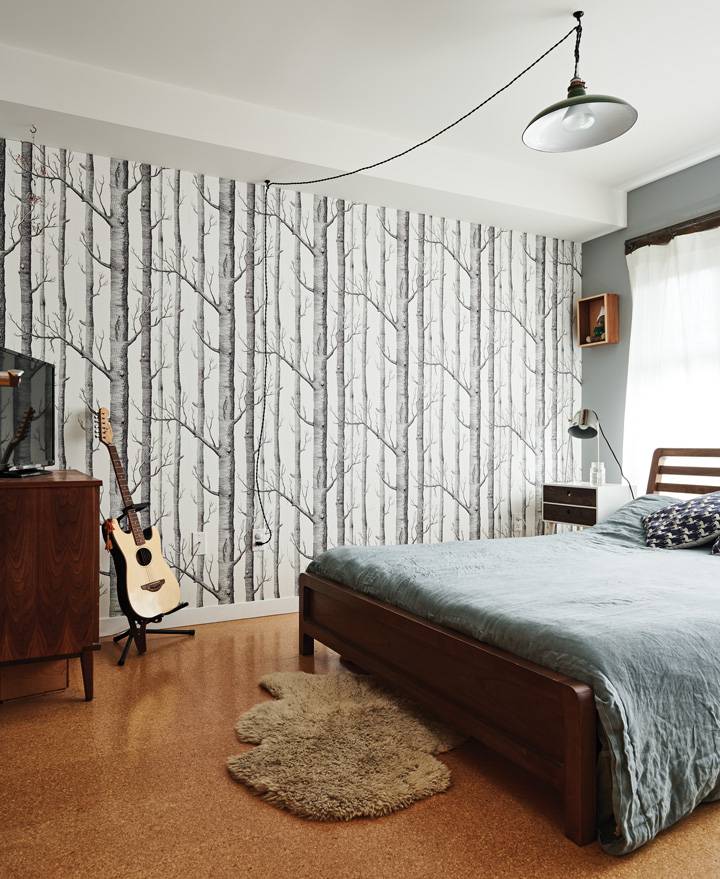 For the master bedroom, the nature-loving Cochrane chose Cole & Son’s Woods wallpaper to create a dramatic feature wall. Varied elements, such as the distinctive Trade Roots light fixture and the mid-century modern dresser, work together to create an eclectic, inviting feel. Cork floors are found throughout the home, including in the two bedrooms. PHOTO: JOSHUA LAWRENCE.

A Sense of Community

Their home’s locale is a big part of the attraction and the reason they don’t want to leave. Cochrane highlights the ability to bike everywhere and the short walk into the downtown. And they both love the community feel.

‘We’re always spending time in the parks and going into Caffe Fantastico and running into people and other families that we know,” Arostegui says.

Scott and Rydygier also point to the sense of community as a reason they love their lifestyle in Chinatown. Whether grabbing chocolates at Pure Lovin to sandwiches from Claudio at La Tana to hot beverages at one of the five coffee bars or two tea shops, the pair see friendly and familiar faces. A few years ago, they even hosted a block party in Fan Tan Alley, with a band and DJ, inviting neighbours and local businesses. It’s one of their favourite memories from their time in the neighbourhood.

“People are supportive and friendly and not invasive,” Scott says. “We’ve known a lot of these people for a long time.”

“I love some of these people,” adds Rydygier.

It’s a sentiment echoed by Smolders, who says all the familiar faces are one of her favourite things about her home and neighbourhood.

“It’s [also] a two-minute walk to work and I can grab fresh produce at the Fisgard Market anytime,” she says. “I feel so fortunate to start every day opening our front door to a busy morning in Chinatown.”