Be a tourist in your own city — and check out a part of town you likely don’t visit very often — and stay at the beautifully restored Fairmont Empress Hotel. 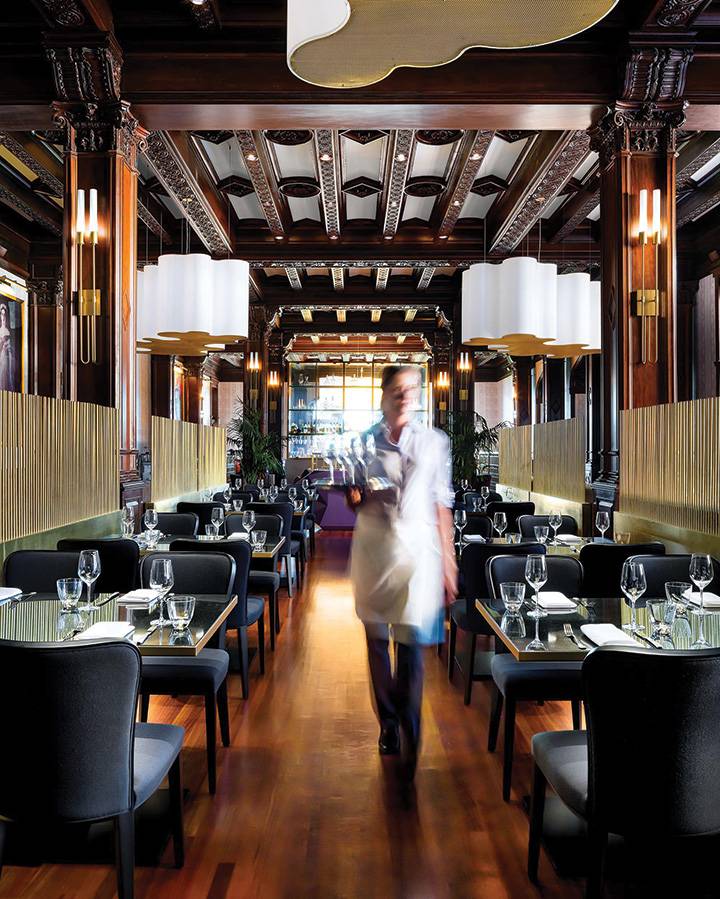 The grand refurbishing of Victoria’s Fairmont Empress Hotel looked to update its dated interiors while being careful to preserve some of its original Edwardian grandeur, such as the millwork of the coffered ceilings and  the inlaid mahogany flooring.

When you live in a historic and tourism-centric city like Victoria, it can be easy to take even the most iconic local landmarks for granted. The sparkling lights of the Legislative Buildings and neighbouring Fairmont Empress Hotel define our cityscape for visitors from around the world, but can disappear into the landscape for locals. I’m as guilty as anyone in that regard, skirting the busy tourist zone in high season. But that also means missing out on what makes Victoria such a popular place.

So we decided to focus in on the stylish destination our city has become, with a “staycation” in the jewel of the downtown crown, the newly refurbished Empress.

Named for Queen Victoria, the Empress of India and the city’s namesake, the venerable hotel has anchored the Inner Harbour since 1908. It’s still an imposing structure — the Château-style facade no longer softened by a tangle of ivy, though otherwise unchanged. But you may not recognize the old girl when you step inside, thanks to a $60-million renovation that’s given her a much sexier, youthful look.

The hotel was purchased by Vancouver developer Nat Bosa in 2014 and had a splashy grand reopening in June to showcase the changes, from its modern dining room and bar to the airy Lobby Lounge for afternoon tea to its stylishly appointed guest rooms. 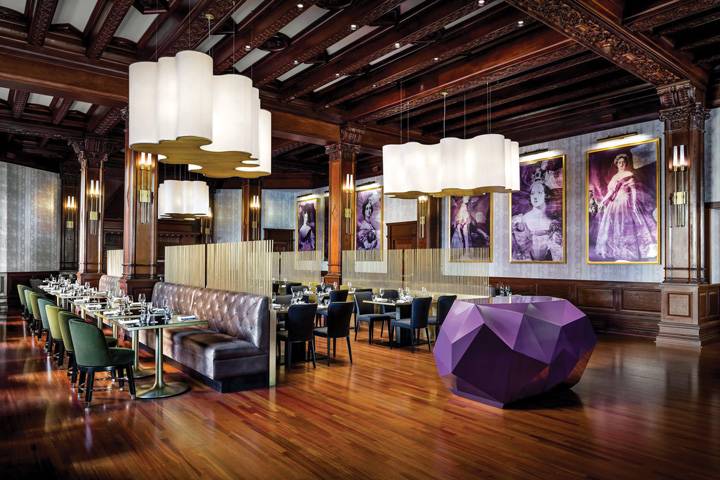 In the Q at the Empress, modern touches include the low, tufted banquettes with satin brass accents, pop-art style portraits of Queen Victoria and the sculptural purple resin front desk, a nod to the crown jewels.

The Empress owes its bones to famed British architect Francis Rattenbury, who also designed B.C.’s Legislature, and its new look to James KM Cheng Architects of Vancouver and the interior design firm of Hirsch Bedner Associates (HBA) of San Francisco.

Modernizing a beloved heritage property and national historic site can be challenging, but the designers found a balance between what’s sacrosanct and stylish. There’s an understated glamour in the modern furnishings, a kind of Barbara Barry sleekness with art deco overtones.

In the Q at the Empress, there are now low, tufted banquettes with satin brass accents, and poster-sized portraits of Queen Victoria in a regent, duotone lavender wash to match the sculptural purple resin front desk, while the original Edwardian millwork of the coffered ceilings and the inlaid mahogany floors remain.

“Did you know [the woodwork] is made from horsehair?” the hostess tells us as we sit down to dinner, craning our necks to admire the elaborately “carved” beams above our heads while marveling at the giant sculpted cloud light fixtures floating below.

The designers also carved out a sleek cocktail lounge in what was once under-utilized space across the way, complete with a glowing quartzite horseshoe bar that makes a great perch for a drink while the sun sets beyond the wall of vintage leaded-glass windows. Next door, the former Tea Lobby is now the Lobby Lounge, reimagined by the Puccini Group’s design team, with soft jewel-tone blue and fuchsia accents for soft furnishings, pulled from the traditional Empress china pattern and set against the room’s creamy historic columns. Vintage brass chandeliers, dressed in contemporary shades, bridge old and new. 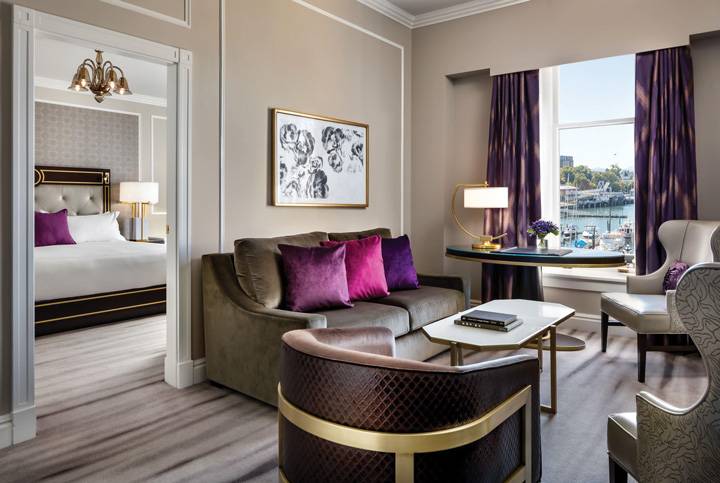 In the Empress’s Gold Floor rooms, classic details such as the mouldings were restored and paired with modern furniture and jewel-tone accessories.

All of the 477 rooms were refurbished, and we head down the Gold Floor hallway, a dark grey-on-grey scheme with oversized patterns in the wallpaper and carpet giving it a unified, contemporary edge.

Our room is a vintage corner space with two walls of towering, double-hung windows overlooking the copper dome of the hotel lobby, offering glimpses of the 250,000 sparkling crystals in its new six-metre-wide contemporary chandelier. The palette is crisp and serene — the brushed brass accents and creamy faux marble side tables balanced by softly sculpted sea-blue carpets, raw silk and flocked velvet cushions, and platinum leather chairs. 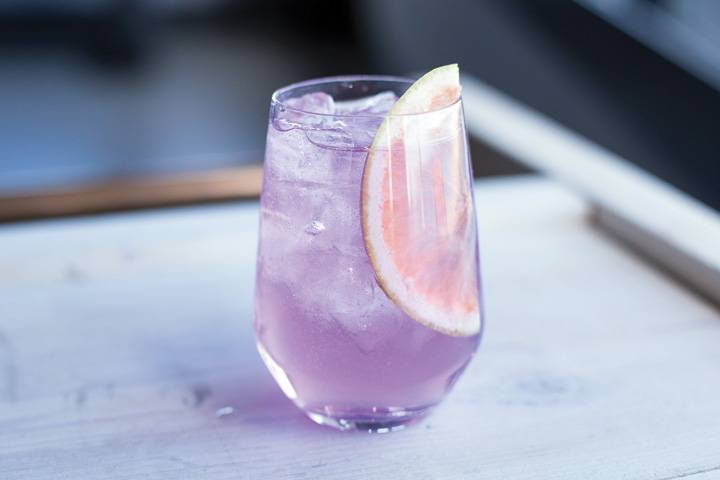 The Empress 1908 gin gets its colour from with indigo butterfly pea blossom.

One of the pleasures of staying at the Empress is easy access to the totally refurbished Willow Stream Spa, with its luxurious expanded lounge and a new 90-minute Salish Sea Vitality facial, featuring ultra-hydrating wild seaweed-based products from Seaflora in Sooke.

As the piece de resistance to my stay at the Empress, I try the stunning mauve signature cocktail, a frothy flip made with the new royal purple Empress 1908 gin, created for the hotel by local Victoria Distillers, and infused with the same indigo butterfly pea blossoms that tint the Fairmont Empress Blend tea. After we indulge in herb-crusted halibut and tender seared sea scallops with local spot prawns, we try the crème brûlée followed by the chocolate and hazelnut Empress Torte.

The latter is Pastry Chef A.J. Thalakkat’s signature piece, layered with cassis and airbrushed in gold leaf. Both are topped with the fruity signature chocolate he formulated during a trip to Paris — a miniature British crown on the layered torte, and a free-form branch artfully laid across the shallow dish of caramelized custard, scented with citrusy grand fir and garnished with a crisp pistachio sponge to mimic local reindeer moss.

It’s just another of the stylish touches we’ve discovered during this gorgeous getaway, right in our own backyard.