It’s the season of comfort and joy, but what does joy really mean? As YAM discovers, some of the most inspiring wisdom about joy comes from people who have seemingly had the greatest burdens to carry. 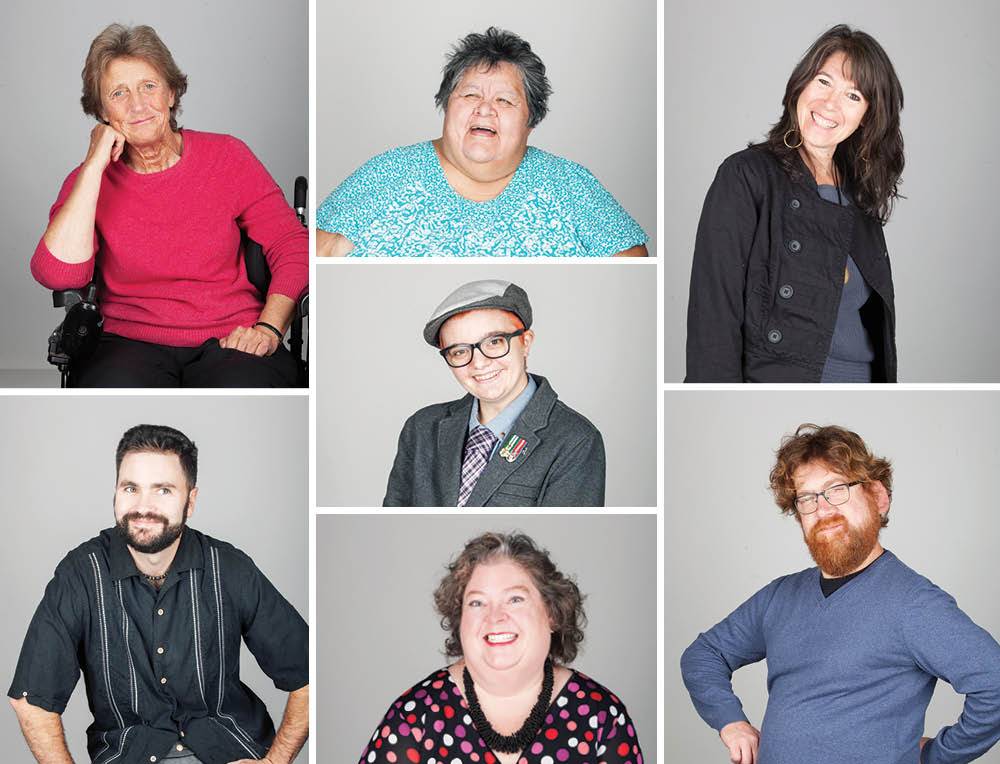 “And they all lived happily ever after.” Wouldn’t it be something if that were true — if we all could wake up feeling joyous every single day, in a life without suffering?

But any person grown beyond childhood — and even some still in it — know from their own experiences that joy is not a given, not a permanent state. It’s fleeting and mercurial, notoriously hard to hold onto as life’s ups and downs take their toll. Joy is elusive, even for those who appear to “have it all.”

Yet somebody with a lifetime of struggle and barely a buck in their pocket can still be the most joyous person in the room. Someone who’s known nothing but setbacks can be relentlessly optimistic. How do people dealing with adversity find joy even while people with every reason to be happy bog down in their search for it?

Victoria academic and entrepreneur Jacqueline McAdam asked herself the same question after extensive travel in Africa, where she met cheerful children and young people carrying on with their lives despite growing up in dire poverty and seeming hopelessness. She wrote her doctoral thesis, “More Than Luck,” a decade ago on what she found out.

We spoke with McAdam for this piece and also did a little crowdsourcing to ask Greater Victorians who came to mind when they thought of someone they knew who sought joy despite dealing with adversity. People responded with dozens of names.

The moving stories of the small selection featured here echo many of McAdam’s findings in her studies of African children. Their stories underline the points made by Archbishop Desmond Tutu and the Dalai Lama in their Book of Joy: Lasting Happiness in a Changing World (Random House) — that joy comes most readily to those who feel connected to a larger world; that it’s rooted in spirituality and the way we frame our experiences; that we are most joyous when helping others.

“People who experience joy give more than they get,” says McAdam, a university instructor and owner of the social enterprise Resilient Generations. “Joyful people know that it’s through other people that we grow, and so they take the risk. Joyful people look for new experiences. They overemphasize the positive while underplaying the negative.”

That last finding in particular describes each of the people sharing their stories here.

A life transformed forever at age 12 by a massive head injury. A single mom who finds herself in a wheelchair with multiple sclerosis. A woman beset by childhood bullies, depression, sexual assault and now a fatal cancer. A recovering drug user who went through chemotherapy while living homeless on Victoria’s streets. A young person who’s been fighting her way through a life-threatening illness from the time she was born.

All seemed surprised to hear that someone had named them as a person notable for their joy. All framed their adversities as something that ultimately bettered them.

“I’m an ordinary person who has had some things that the average person hasn’t had to deal with, but maybe that’s what makes me able to juggle stress,” says Sam Jones, owner of 2% Jazz Coffee.

His painful memories of being teased about a speech impediment and his appearance — he has a still-undiagnosed genetic condition that causes tumour-like growths on the left side of his face and neck — tainted his school experience so much that he opted to home-school his three children when the time came.

“It occurs to me that my adversity as a child strengthens me, has made me who I am. Part of what I do is survive, and I think that comes from working hard enough throughout my life to get through the bad times.”

Pippa Blake, diagnosed with multiple sclerosis as a young mother and in a wheelchair for the last 26 years, says she likely wouldn’t have spent the years since then sky-diving, sailing, horseback riding and making her way to Mount Everest base camp in 2007 were it not for developing MS.

“All these things I do, I wouldn’t be doing if I weren’t in a wheelchair,” says Blake. “You get to a stage where you say, ‘Why not?’ Getting MS has opened so many doors for me. It has made me a nicer person. I have time for people.”

People who find joy appear to reframe the negative events of their lives in positive ways, says McAdam. Mary Katharine Ross, communications officer with the Community Social Planning Council, exemplifies that, having embarked on a “year of forgiveness” as an adult to be able to forgive, among other things, the two men who raped her at 15.

If joy comes from giving to others, Jeneece Edroff deserves to be among the most joyous in town. Beset with lifelong severe health challenges from neurofibromatosis, the 23-year-old has a legendary drive to give back to her community that started when she was only seven. She has raised $1.25 million to date for local health charities.

“To find joy, look at things with a different perspective,” advises Edroff. “Be around people. Smile and say hi. It’s the little things that can change a person’s attitude. Find a hobby that makes you happy.”

Joyous people know when to call on friends and family for help, notes McAdam.

Michael James Cameron, who went through 20 hard years of substance use and suicidal thoughts from Grade 8 on after a ski accident at age 12 left him with a severe head injury, remembers his family as his “biggest fans” through it all.

Now in recovery and a volunteer with the Victoria Brain Injury Society, Cameron can still recite every word of the Robert Service poem “The Quitter,” which “really resonated with me” when he came across it after his Grade 8 teacher assigned everyone to memorize a poem. By then, he was already heading into drug and alcohol issues, out of step in a small Alberta town where few knew anything about brain injuries.

“My advice: don’t give up,” says Cameron. “I remember this guy in high school telling me, ‘Don’t let the assholes beat you down.’”

Sara McKerracher also recalls her family as “amazing” through the period in 2015 when she was living homeless and addicted on the streets of Victoria, going through chemotherapy for Stage 4 lymphoma (now vanquished). The 28-year-old survived that hard experience determined to change her life.

“Joy for me is something that happens from the moment I wake up now,” says McKerracher. “I’m in a warm bed, waking up in good health. I don’t ever want to forget the things I went through, but I also don’t want to dwell on them.”

Joyous people embrace new experiences, says McAdam. They know how to live in the moment. Sue Morgan, 67, is facing down end-stage kidney failure by packing her bag for six more months in her beloved Guanajuato, Mexico, having rejected dialysis and organ transplant as “not for me.”

She says given her many health issues, she wouldn’t feel right about lining up for a new kidney at this point when so many other younger, healthier people need one.

“I still make plans, just not long-term ones,” says Morgan. “My advice? Don’t be afraid. We’re all going to die. Figure out what matters and live every moment.”

A number of those interviewed cited spiritual practice as vital in their lives: faith, meditation, yoga, mindfulness. McAdam saw that among those she studied as well: “Most people who are highly resilient have a fundamental spirituality.”

Debra Bell has suffered one major life challenge after another, including the death of her son Robbie from a heart condition at age 10 and the diagnosis of her other son, Riel, with schizophrenia at age 17. But connecting to her Bahá’i community and faith never fails to bring her joy, says Bell.

Ross says A Course in Miracles — a spiritual thought system developed in 1975 by the Foundation for Inner Peace — is “my prayer book.” The Findhorn Foundation’s Game of Transformation is an integral part of her life.

But just in case anyone is thinking that those who know how to seek joy never suffer again, best to let that one go. Bad things happen to good people, including everyone interviewed for this piece.

That Jones never leaves his workplace without saying to his employees, “Be nice” didn’t protect him from being “totally and completely hosed,” as he puts it, in a business relationship a few years ago, costing him his business, his home and very nearly his marriage.

Ross’s year of forgiveness didn’t spare her a diagnosis 18 months ago of multiple myeloma, an incurable cancer. Blake’s amazing adventures still haven’t replaced the feeling of a hike through the woods on her own strong legs. Edroff’s health challenges will never go away.

“Our adversities change, but we’ll always have them,” says Jones. “It’s part of being human — hunting for food, climbing up a tree at night to stay safe. It makes us more human … and humane. Maybe it’s actually positive that we have these adverse things happen to us.”