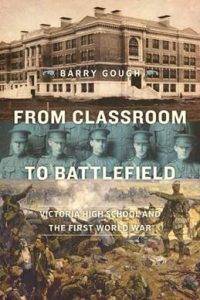 From Classroom to Battlefield: Victoria High School and the First World War, a new book by Canadian historian VHS alumnus Barry Gough, offers a poignant examination of the First World War and its legacy for a school, a city, and an entire generation. It will be released in Victoria just in time for the city’s Remembrance Day ceremonies.

The book highlights the experiences of 20 young men and women associated with the school who served at the front line in some of the war’s bloodiest battles, including the Somme, Vimy Ridge, Passchendaele, Amiens, and others. Of the 500 or so who went to war, over 80 would die there; those who returned were forever changed by the experience.

“I have a been a working historian for most of my life, and many grand and exciting topics have come my way, but in all honesty none has captured my interest as has this story of my old school in the Great War,” Gough says. “It is a quintessential Canadian story that deserves to be widely known and widely read.” 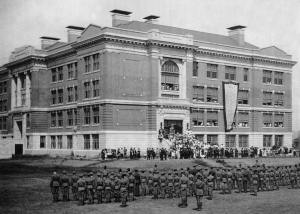